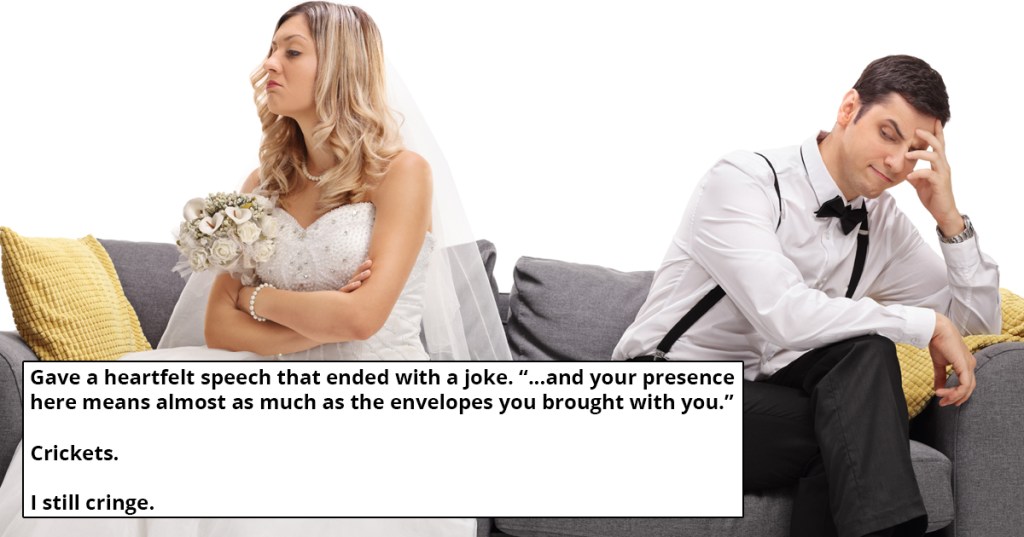 If you’ve had a wedding, you have at least a few regrets. There’s just no way to pull off a massive operation like a wedding without wishing you could have a do-over. Hopefully, your wedding regrets are limited to the smaller details, like “I wish I’d picked different centerpieces for the reception tables,” and not the big stuff, like, “I wish I hadn’t married someone who still wears Smurfs footie pajamas.”

Recently, someone on r/AskReddit asked Redditors to share the things they wish they could change about their wedding. The people of Reddit did not disappoint, responding with over 14,000 comments. If you’re about to get married, maybe their answers will help you avoid regrets of your own. But if you’re already married, well, at least you’re not alone in your disappointment.

And hey, if wedding regrets are still getting you down, there’s always divorce!

2. Did George Costanza teach you NOTHING?!

“Paper invitations and RSVPs. Set up a wedding site and have people RSVP there. The amount of stress I put myself through trying to get paper mailed back to me in an era when no one uses mail anymore was so unnecessary. At one point we’d gotten very few RSVPs back and I had a total crying meltdown about how no one was going to come. Of course they were going to come, it’s just no one uses mail anymore. Save yourself the headache and the money. It’s my biggest wedding regret.”

“Inviting people I didn’t really want to invite. They just cost you money, you don’t interact with them at all, and they usually don’t bring a nice gift to make up for it.

EXCEPT for letting all of the divorced aunts and uncles bring +1’s. Because that let to a whole jealousy competition train that was extremely entertaining.”

4. Never trust your friends, with anything.

“I’ve been married for 16 years now so this is a little old school. We bought a bunch of disposable cameras and set them all over the place at our reception with a note on them that said take some pictures. At the end of the night we collected all the cameras and had the film developed. Most of them turned out really cool and we got some pictures we would have never thought of taking. The regret comes in me underestimating some of my friends ability to be adults for 1 night and ended up with a lot of dick pics also. Lol.”

5. Lower those wedding night expectations. (Especially if you’re in your 30’s.)

“Renting a nice room in a fancy hotel. And then expecting to have sex when we were both just absolutely f*cking exhausted. Don’t get me wrong, my wedding day was possibly the best day of my entire life, but it would have been just the teensiest bit better if we’d gotten some charming bed and breakfast and not forced ourselves to have tired, tired sex at like 1 in the morning. Turns out fancy ass hotel rooms are basically just like a clean version of non fancy ass hotel rooms, not that my poor ass would have known that before hand.”

“My number one regret is telling people not to take pictures. I know it sounds dumb but it is much worse than that. In our agreement with our photographer she told us that other cameras were not allowed as the flash from another camera could ruin our pictures. So we politely told people to refrain from taking pictures and explained the situation. We had a great wedding and the photographer even sent an extra photographer to work the wedding (2 instead of 1). A few weeks after we tried contacting her for the photos. We got ghosted. We tried for about a year to track her down. We were still willing to pay for the photos, even unedited. We just wanted the photos. Fortunately some people didn’t get the message so we have a few (10-20) photos from our wedding. The worst part was that someone had contacted my wife through FB two weeks before the wedding warning us about her but we decided to take the risk because there probably was no way to get another photographer in that kind of time. When she showed for the date we were relieved and thought we dodged a bullet.”

7. Those guests should be thrown in Wedding Jail.

9. Leave some space for the Lord.

“After the wedding we went to our reception.. the wedding party etc… had their own theme songs to come out too. Then comes out my wife and I, we had a few drinks in us by this point… we were supposed to do a whole dance entrance type of thing… I can’t dance so I got nervous and reverted to grinding my wife in front of 300 people. That was the most cringeworthy moment of my life lol.”

10. Everyone has it. No one needs it. You’ll probably get some, too.

“Registering for gd china. I didnt want it. Knew we would never use it. Recieved every thing. Never have used it in 25 years.”

11. If you REALLY need a stage manager (you don’t), at least pick a good one.

“I regret the coordinator they gave us for the ceremony.

Dude got flustered and started second guessing everything right before the ceremony. Like he somehow forgot how a wedding works at the last moment, when all of our guest where there. “OMG what song do you want to play while she walks down the aisle!” I dunno dude, the one everyone walks down the aisle to. The wedding song. The one we already told you to play.

I ended up taking charge and sorting everything out. Really wish I could have just gone with the flow on my big day.”

“Letting my mother in law have any say in anything. She ruined the food.”

13. Weirdly, he DID thank his dermatologist.

14. When the limo driver also lives in the limo.

“Uncle offered to pay for the Limo. Great. But it turned out to be this busted 1980s limo with a spiderwebbed window and no hubcaps. What looked like a homeless driver. He literally went on craigslist and got the cheapest one with no research. We called an uber.”

14. But above all, savor it. You only get married once. (Hopefully.)

“My biggest regret is that it all felt so rushed – we were engaged on NYE and got married at the end of August (having settled on a date in May). The summer was a whirlwind of planning while both of us worked full-time jobs. We got married on a Sunday, in a city (Montreal) six hours from where we lived (Toronto). We both worked the previous Friday, and were back home on Monday for to leave for our honeymoon on the Tuesday, which involved a lot of driving around, and then jumping back into the grind pretty much the day after we returned.

In short, I would have taken a few days off work to relax and get into the holy-shit-I’m-about-to-get-married headspace, and I would have opted for a more relaxing honeymoon.”