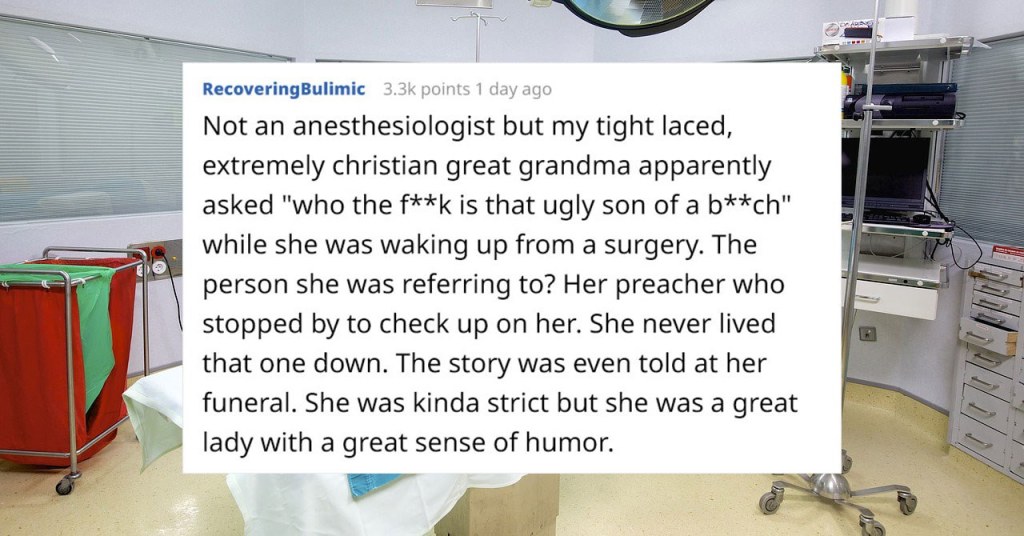 15 Of The Funniest Things People Have Said Under Anesthesia

It’s a fact of life: people under anesthesia say hilarious stuff. We know this because people either going under or coming out of anesthesia are one of the dominant genres of viral videos. You’ve probably seen David After Dentist. Since it was posted in 2009, this two-minute video of a loopy kid on the way home from oral surgery has received over 138 million. David’s great-great grandchildren will still be living off the royalties.

Unfortunately, not all of these moments can be captured on video. Sometimes, the only people around to witness anesthesia-induced goofery are medical professionals, who can’t very well film their own patients for Internet lulz, or the patients themselves, whose memories are spotty for obvious reasons.

Many of these moments are forgotten, but some are so hilarious that they’re unforgettable. Recently, a Redditor created an Ask Reddit thread prompting both doctors and patients to share their funniest anesthesia stories. They didn’t disappoint. Here are 15 of the funniest. (via Bored Panda)

1. The devil and the arm carpet.

“Two of my fav, both patients coming out of anesthesia:

‘Am I in hell?’ I responded ‘No you’re not, you’re just in recovery.’ ‘…That sounds like something the devil would say. Count backwards from 100 to prove it.’

Or the one who stroked my unshaved arm while I was trying to keep him from pulling at his IV, and muttered ‘You’d make such a great carpet.'” – via Reddit

2. Is this surgery or a roast?

“Kind of a reverse story. Going under to get my appendix removed, they begin doing the countdown as they inject a hefty dose of propofol and fentanyl to put me out. I count down to 1 and then ask, now what?… The surgeon looks at me and says ‘You’re still awake??… Man… You are fat you know that?’

I said “You’re just saying that because you think I won’t remember.”

3. Are those breath implants?

“Nurse anesthetist here. When I was in school i was getting ready to get a lady off to sleep and going through my regular spiel. I had the mask on her face and I said ‘Nice big breaths,’ as I pushed propofol. Right before she went out she said ‘Thanks, I just had them done.’ I looked at my preceptor, we looked at the circulator, and we all burst out laughing. I now say ‘Slow deep breaths,’ instead. I love telling that story, that lady made all our days.” – thedavecan

“Last year they were knocking me out for a colonoscopy. It was the third time I had been put under in a year.

As such I had a curiosity: I had heard that when they knock you out you are still awake for awhile, you just don’t remember.

So in the spirit of science I proposed a test with the anesthesiologist: when she started the medicine I would begin counting backward. When I would wake up we would compare what I remembered to what she observed.

Minutes later I awoke. The anesthesiologist espied me and came over quickly.

‘What did you remember?’ She asked.

5. In comedy, timing is everything.

“I had to go under for ear surgery once. I thought it’d be funny if I asked “does anyone need anything while I’m out?” right before I went under.

I remember it kicking in way quicker than I thought it would so I had to take my chance while I still had it. I yelled it but got a VERY confused look from everyone standing around me… took a minute for me to realize I had accidentally yelled it while I was waking up from surgery. Oops.” – aliceinwonderbread

6. Pretty sure they never covered this in medical school.

“My dad works with that stuff, funniest thing he’s heard is ‘Hey mr doctor? My ass itches and I’m too high to scratch.’

Edit: No he didn’t help, the dude passed out right after.” – AceOfSpades07

“My wife is an anesthesiologist and her best line from a patient is ‘This is better than meth!'” – bradlas

“My husband went under last year, and once he woke up, by a appearances he was as sober as a church mouse. Walking, asking serious questions of the doctor, apparently no issues are all. He remembered the procedure and described it to me in detail. I figured he just never went completely under.

He was craving Chinese food, and nothing would do except for buffet, so we headed down and loaded up our first load of plates. Evidently, he actually woke up from the anesthesia at the buffet. As far as he remembers, he was put under and woke up in front of a plate of chicken teriyaki on a stick.” – Calliope719

“When I was 9 and having jaw surgery, the surgeon was putting me under and said ‘Say bye to your mommy!’ And apparently 9-year-old me thought that meant they were going to kill me. My mother says I gave her a look of absolute terror and then passed out.” – sadlyecstatic

10. Where’s your house made of gingerbread, huh?!

“When I got put under for a colonoscopy I didn’t really fall asleep during the countdown. I just looked at the nurse a bit confused and said ‘Umm, I don’t notice anything.’ And she smiled and squeezed my wrist and said ‘Just give it a moment.’ As soon as she said that I started fading out and according to her the last thing I mumbled was ‘Oh that’s fucked, you magic witch.'” SirSwagAlotTheHung

“Not an anesthesiologist, but when I went in for my gallbladder surgery the nurse was an old coworker and I blurted out on the table ‘I knew you’d see me naked’ before I was out.” – kcotty87

“Not anesthesia, but patient was heavily sedated in ICU, nurse gave an enema, half conscious response: ‘Honey you know I don’t like it that way.'” – backroundagain

“When I was getting put out, I heard this cheesy jazz music in the operating room. I said, ‘Of course Dr. R listens to this garbage.’ Dr. R immediately appeared next to me looking none too thrilled. Then I went under.” – therapist75

“After getting my wisdom teeth removed I looked at my mother-in-law and said, ‘How did you get on my rocketship?'” – autofillmesomething

On the table anesthesiologists gave her propfol and she just didn’t fall asleep, kept looking around. Gave some more, eventually closed her eyes and as anesthesia was intubating, said something like, ‘Yeah, that was a lot, I’m a vet now, I’ve never put a horse to sleep before.’ Everyone chuckled.

When she woke up at the end, was moving around a lot, no big deal. Started rolling around and reaching and grabbing at her lines, nasal, urinary catheter, the nurse, face mask, me, the poor Med student who didn’t even want to do surgery. I lean over to keep her in place and she starts trying to get out of bed. She was stronger than she looked. Again, little annoying but whatever, part of the process. 9:30pm.

Now in recovery and I sign out the patient to the nursing recovery team. Patient is calm and fine. I go do computer stuff and get back to other patients.

I get a call from recovery nurse, 10pm. Nurse yelling for help, won’t tell me what’s wrong, just that I need to be bedside immediately. I sprint to recovery thinking the patient is bleeding, heart stopped, blood pressure tanking, etc.

Patient standing on the bed/stretcher SCREAMING tongues, thrashing her arms around like a blow up car-lot-noodle-man. Anesthesiologists is trying to grab her swinging IV line. I’m trying to talk her down but she’s gone full Godzilla vs. tiny townspeople. I grab her legs and lower her down anesthesia gives her some IV CalmTheFuckDownitol. She gets stary eyed and we breath, life is good again. 10:30pm

I’m behind on work. Trying to catch up, getting hit with ED consults, ICU calling for help on a bleeding patient, haven’t had dinner, my senior in the OR so I have no help. Phone rings, nurse says, ‘the lap chole patient is asking if she can go outside to smoke a cigarette’ 1:45am

Nurse, ‘I just told her no, it’s not safe, she told me to go fuck my goldfish…can we give her some Nicorette gum or something?’

Only time I’ve ever ordered stat then called the pharmacy for hand delivery of frickin gum. Nicorette.

She was a complete sweetheart on morning rounds. I don’t know which was real.” – Dr_D-R-E