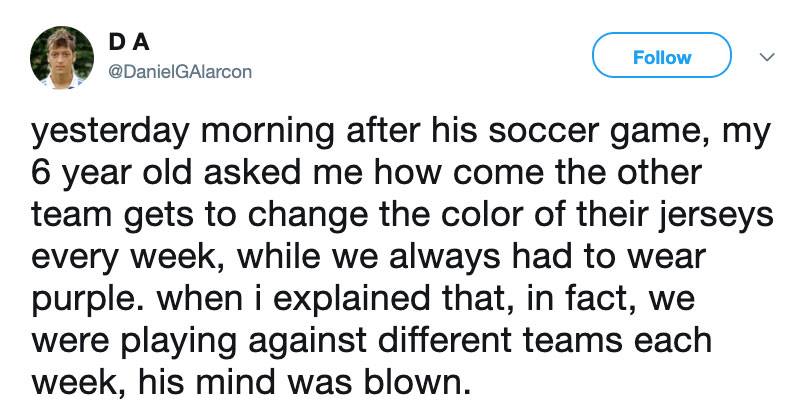 It’s not really fair to call any of the kids mentioned in these Tweets “dumb.” Small children are still figuring out the world in all its intricacies, and they’re going to make mistakes. When I was a kid, for example, I thought there was a person inside every ATM who dispensed the money, and that you could withdraw as much as you wanted. If an adult thought that, yeah it would be dumb. But since I was a kid, it was perfectly acceptable.

Even so, these kid-isms are still hilarious. As any parent knows, one of the challenges of parenting is when you can’t laugh even though your kid did something really funny. When a kid spouts some nonsense about the world, the right thing to do is set them straight. And after that, the right thing to do is write down what your kid said and share it with strangers on the Internet. Like these parents did.

1. Actually, this is kind of genius.

today we asked my three year old cousin how much he weighs and he said, “uhhh, like fifty squirrels”

When my youngest brother was little he was being bullied and went to my parents for help. They told him “Sticks and stones may break my bones” they then asked him to finish the phrase and he said “but chains and whips excite me” he seriously thought that was he second part.

*Opens bottle of bleach*
Nephew : How did you open it? I tried but it didn’t open.
Me : Oh it’s coz it has a child safety lock. Children can’t open it.
*nephew looks at bottle in amazement*
Nephew : How did it know I was a child?

4. Flipper’s NOT that kind of dolphin!

Lifeguard at the lake: “EVERYONE PLEASE EXIT THE WATER, WE’RE LOOKING FOR A 5 YEAR OLD BOY IN BLUE SHORTS NAMED TITUS”

Little boy standing next to me in blue shorts: “hey, my names Titus too”

Almost 2yr old for sale. Been crying for 10 mins cuz he cant get in the oven with the cornbread. Entertaining all offers.

8. Next you’ll be telling me Batman is fictional.

I bought my son a book about bats and halfway through it he shouted out, “WHAT??? BATS ARE REAL?!?!” All this time he thought they were made up for Halloween like ghosts and witches

9. Someone’s not getting that remote-controlled BB-8.

My son sent a letter to Santa. I hope it gets there. It doesn’t have any postage on it and he put it in the bathroom heater vent.

10. Nothing is too small for siblings to fight over.

My son keeps grabbing fists of air and screaming ‘mine’. My daughter is crying saying Tj is stealing my air….they are in my bedroom, on a Saturday morning….???

11. Hey, can you drop me off a couple blocks away from the dog park? Thx.

I just remembered that when i got my first dog i was 7 and he was 1 (7 in dog years) and i cried when he turned 2 because i didnt think a 14 year old dog would wanna hangout with me.

just seen a little girl confidently walk up to a bath bomb in lush and take a bite out of it, kids are class

13. The case of the missing lunch box.

Lions can hunt and kill their own food by the time they’re 3 months old.

My 3-year-old couldn’t find her lunch box, and it was in her other hand.

I can’t believe we’re at the top of the food chain.

I hate this house. One of the kids ate my wing and tried to replace that shit ?? pic.twitter.com/djNGwjdKwl

15. As a parent, no matter how much you teach them, you’ll always miss something.