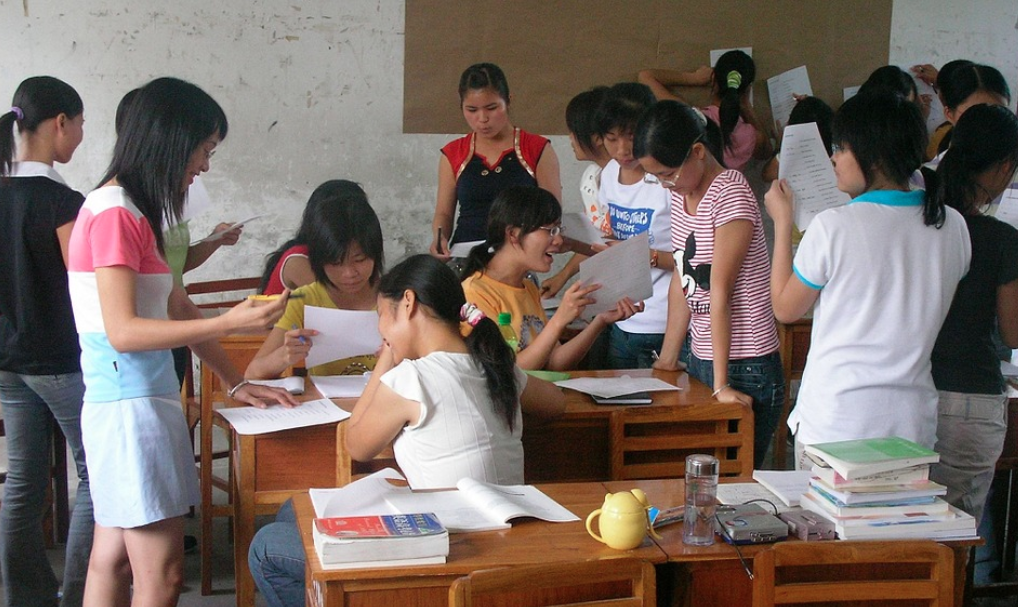 Can you imagine the kind of things that teachers have to put up with these days? “Helicopter parents”, bratty kids, etc.

Well, now it’s time for the teachers to turn the tables. In this AskReddit thread, teachers fessed up about the absolute worst paper they ever had the misfortune to grade.

“We’d just spent two weeks on WWII and the kids were supposed to write a summary essay on the major events. This kid genuinely believed that WWII lasted two days; The Germans bombed Pearl Harbor, and the next day America nuked Tokyo.”

“I teach chemistry, not English, but they write one big paper as a write up after a long lab.

Anyway, I had this one student, let’s call him Joe, who was a pain in my butt. Constantly late, disrespectful to his classmates and me, often just ditched, so he was waaaaay behind. Anytime I’d call on him during class his answer would be “HYDROGEN!” We could be talking about molecular structure, I’d call on Joe to tell me how a transition metal like iron was [structurally] different from a halogen, and still that’s what he’d shout.

Fast forward to the end of the year and the long lab write up. All the kids, including Joe, have done the lab. I give rubrics, clear guidelines on what I expect them to discuss, and a deadline. Deadline comes and they’re all submitted through Google classroom, I start reading. I’d made it through about 10 of them, and [they’re] okay. The kids gave it a decent shot.

Then I get to Joe’s essay. He’d literally typed the sentence “The answer is always Hydrogen.” Hundreds of times. Enough to reach the page length requirement. And he’d done it with the correct headers for each section, too. I was impressed with the amount of effort that had been put into screwing his grade away.”

“My parents graded GCSE papers every summer. One year my mum got an English essay exam on which the kid had written “I don’t understand the question so I’m going to write you a poem”, followed by said poem and an elaborate drawing of a tropical island.

“I once was in an English class with several papers that had to be peer-reviewed. One of my classmates wrote a 15 page paper that was, for the most part, barely comprehensible. But the real kicker was that she directly quoted Santa Clause 2. In a final paper for a college-level senior capstone, a real person quoted the 2002 Tim Allen Christmas comedy, Santa Clause 2.

We also had to discuss each other papers in class afterward. Awkward.”

“I was observing a class at a highschool (one for very low standards and many, many problems) and the teacher I was observing told me about how one student on his state exam (4th grade) wrote 90% of his essay in emojis.

He did not pass.”

This was a college level class.

I still have photos of this paper, though I’ve lost the original copy. It is glorious. I read it to all new friends.”

“My brother was grading papers for an astronomy class he took last year, when he came across a paper in which somebody quoted the bible’s creation story, thinking it was an adequate explanation of how the universe came to be.”

“English teacher. Read and discussed ghost stories with class- what makes them spooky, how they are structured, building up tension, key elements etc. They set off writing their own. ghost story supposedly using everything we had been studying. When I marked them one boy had written a ‘goat story’. Seriously!”

“I was in a master’s program for the last two years, and I had to peer review a classmate’s paper. Holy sh-t.

We were supposed to write a persuasive research essay on an effective way to make college more affordable. I was lucky enough to peer review a classmate and coworker, who already possessed not one, but TWO master’s degrees, and he was somehow on his way to a doctorate. I’m honestly still perplexed trying to figure out how he got those other two degrees.

Anyways, the paper was littered with grammatical errors. My favorite of those was when he started making up words, and talked about the problem of student indebtness. He probably meant indebtedness, but he used it incorrectly multiple times, so make what you will of that.

He also referred to the student debt problem as an extra layer on students’ frustration cake. Yum.

This person was a veteran, and at one point in the paper, he talks about the terrorist attacks of 9/11/11. I understand that that’s a single-number typo, but also, if you’re going to state that as your reason for joining the military, at least proofread it like you care about what happened that day.

The good part, however, was his actual argument. For some reason he was arguing that college should be more affordable, but only for veterans (you mean the GI Bill?). He said that we could make this happen by simply cutting the salaries of professors, and giving that money back to the students.

We’re going to save colleges and universities in America by failing to pay our professors, everyone.”

“Definitely not the worst, but my favourite was a student who wrote in an essay on the First World War that soldiers could be put out of action by being shot in the “head, neck or pancreas” “

“Geography teacher here, I teach 18 year olds. I had assigned a scientific paper of about 5 pages long. Topic was chosen from among the chapter on space. Had a student write it on the subject of the moon. Went of on the good start: different theories of how the moon came into existence. Then suddenly she switched into astrology. It was so smooth I didn’t notice until a full paragraph in.

I had to explain to her why she failed…”

“One of my classmates once wrote and presented on this wacky jumble of conspiracy theories about the Illuminati. The paper was bad but the presentation was awkward as f-ck, he was doing numerology on the chalk board to demonstrate that the Pope was actually the Antichrist and that George Bush was one of his minions.

It would have been funny, but I’m pretty sure he was schizophrenic. Everyone just got really, really quiet, including the professor.”

“Not English, but Politics. I’m a PhD student, and I also teach and mark undergraduate essays and exams.

I get quite a few essays that are just poor quality (things like poor argumentation, lack of critical insight etc), but this is often because the student struggles with understanding concepts and just needs a helping hand. Some clearly just don’t put any effort in, but they are usually in a very small minority.

One of the few essays that really stands out, and the one that I gave my lowest ever mark to, was less an essay and more a diatribe against immigration. I’m not going to mark someone down because I don’t agree with what they write – I don’t really care as long as it’s well-argued, factually correct and follows the principles of academic writing, citations, and argumentation.

This one crossed the line in two respects. Firstly, it was egregiously racist. The student effectively stated that ‘all Pakistanis are child abusers and women-beaters’, amongst other things (although apparently Indians were ok because they were ‘civilised by the british’). Secondly, it just wasn’t an academic essay. The argument was just so, so bad. And they didn’t reference any peer-reviewed sources. Their reference list was a list of URLs to sites like the Daily Mail and Infowars.

Needless to say, I failed it and sent it to the head of department who went to have a chat with the student. I don’t like failing students, but this one definitely deserved it.”

“I once marked an essay that was meant to discuss code (as in HTML). The student wrote about the ‘Pirate’s Code’ from ‘[Pirates] of the Caribbean’…”

“Oh goody, one where I can answer.

So I teach ESL to Japanese children in America. Fun job, good hours, and the kids are usually pretty great. But all of them at some point get stressed out and decide using Google Translate is easier than writing a paper.

It’s fairly obvious when they use Google Translate, as the sentence structure will be off, or the paper just won’t make any sense.

Which leads me to my favorite worst paper ever written, The Ancient Roman Olympics. You could tell that the student wrote it themselves, and then used Translate for the English. So why is it my favorite? Because of one line: “Ancient Roman tank races must have been intense.”

The word he meant was chariot. But the kanji for chariot is the same for tank. You use context to know which meaning to give the kanji. I now have a running joke with this student about tanks races.”