Myths aren’t something new, of course, but it does seem like since the advent of the Internet, they’ve been spreading faster and further and are basically harder to kill than ever. Below are 12 that just won’t seem to go away – even though they need to, because they’re 100% untrue.

#12. The “ancient astronaut” on the wall of a 16th-century cathedral in Spain. 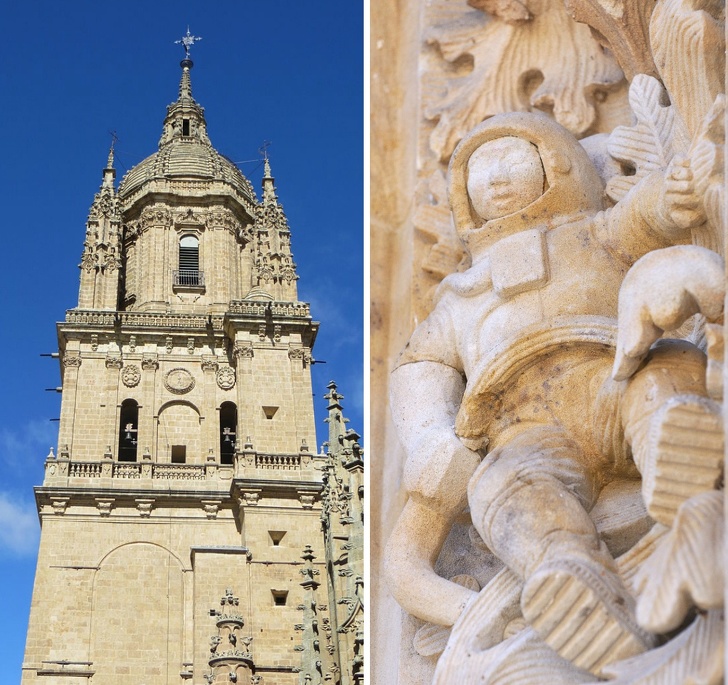 Well…except the cathedral was restored in 1992 by artist Jeronimo Garcia, who decided to add a few nods to the 20tth century. In addition to the astronaut, there’s also this faun holding an ice cream cone. 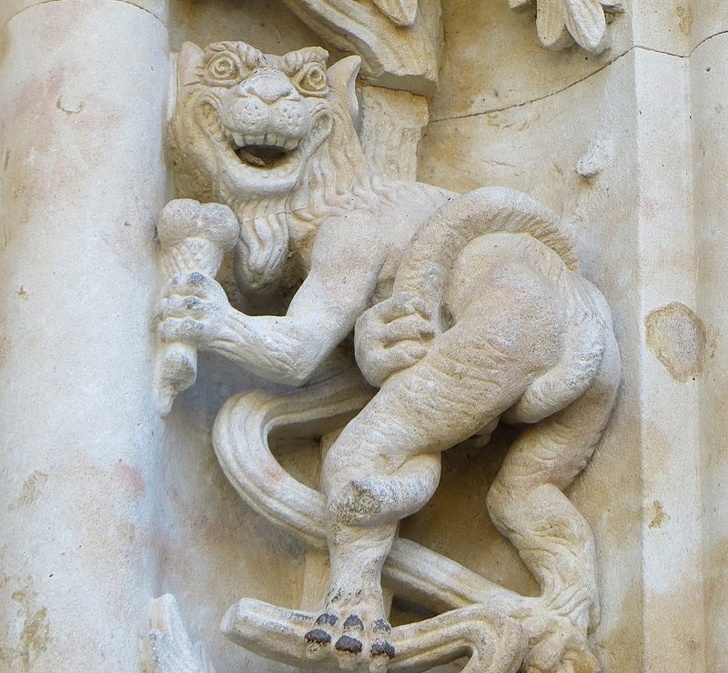 #11. Arnold Schwarzenegger had to spend the night outside when he couldn’t find a hotel room. 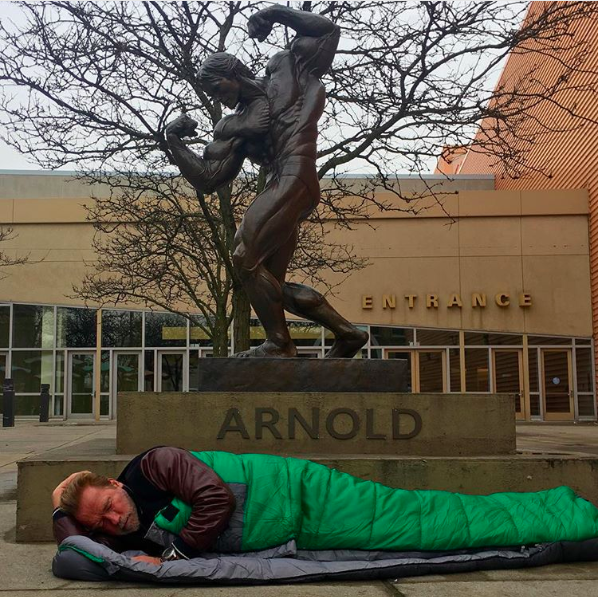 I don’t know who believes this – the act himself posted the photo of himself “sleeping” under a statue of him as a younger man with the caption “how times have changed.”

Someone else stole it and made up the story.

#10. Nikola Tesla was a swimming instructor. 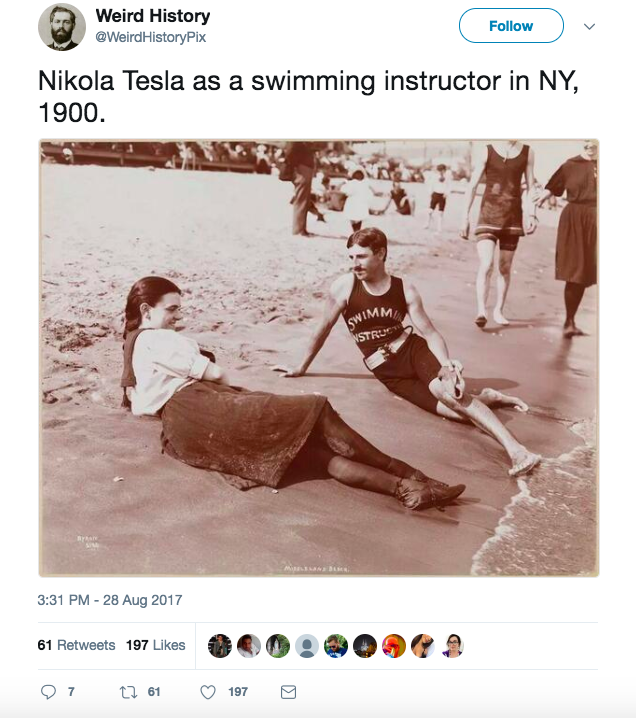 Sure, the guy in this photo looks like Tesla, but given that it was taken in 1898 (when Tesla was in his 40s and doing quite well as far as cash) it seems like nothing more than a case of mistaken identity. Unless you believe in time travel, I guess.

#9. This description of how a wolf pack travels. 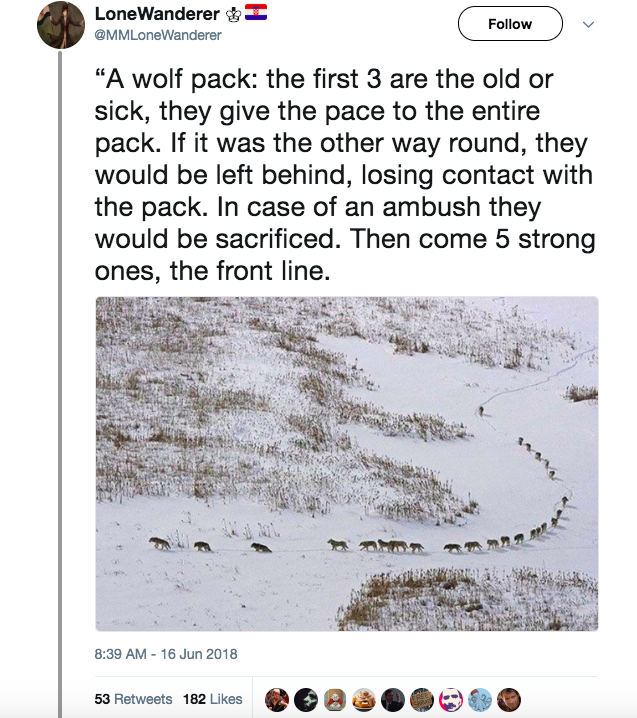 Someone just made it up. Chadden Hunter, who took the photo, explained that this is simply how a pack hunts a bison, and the wolf in the front is the alpha, not the old and weak.

#8. Barack Obama posed with a sleeping guy on the subway. 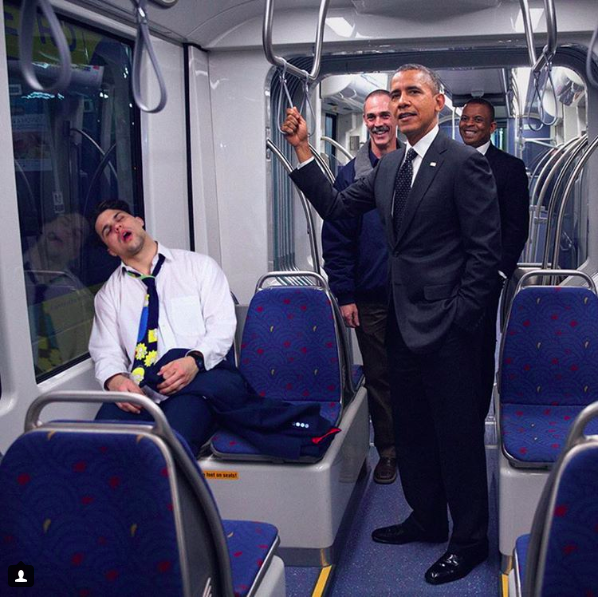 Cute, but fake. It’s a clever merge of two photographs.

#7. James Earl Jones had to wear his Darth Vader costume in order to get into “white only” clubs in London. 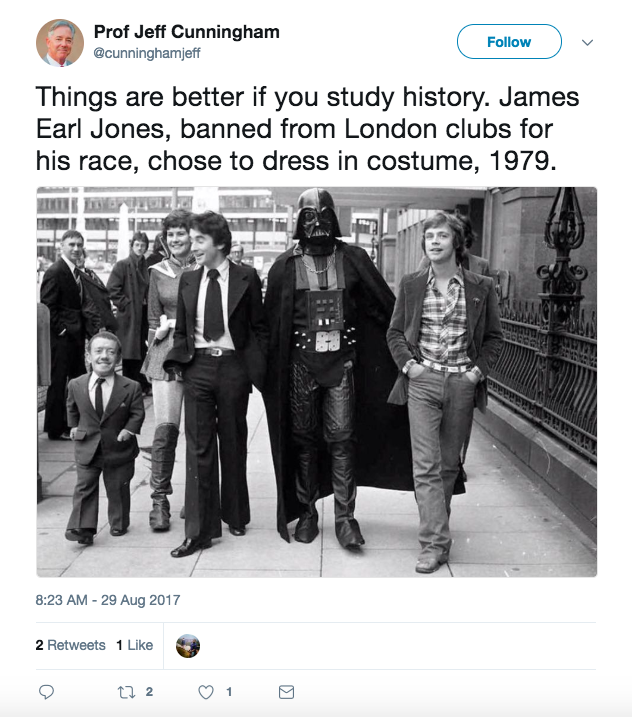 First of all, there were no “white only” clubs in London in 1979, when this image was taken. Second, Mark Hamill confirms that Jones actually never wore the costume, in or out of the studio, because he only voiced the character.

#6. The female wolf protects the male in a fight. 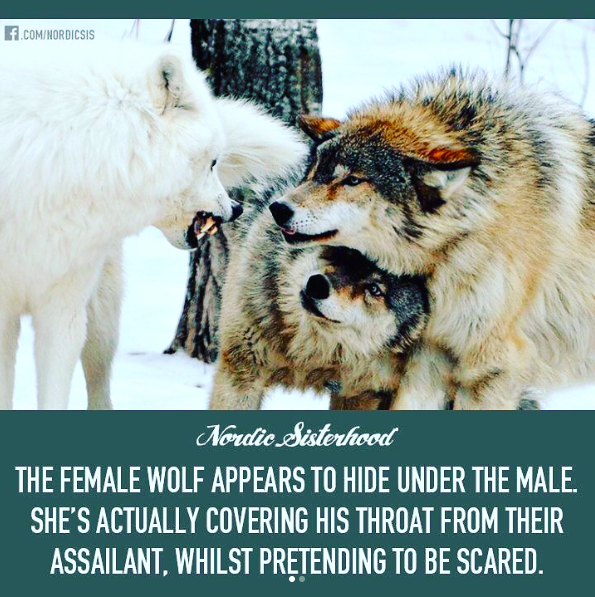 This caption claims that the female wolf pretends to be scared but is really protecting the male’s throat. Not true, says photographer Jean Paul – she simply captured a moment when one of the wolves jumped back (and all of the wolves are likely male).

#5. Cars in the States are melting because of the heat. 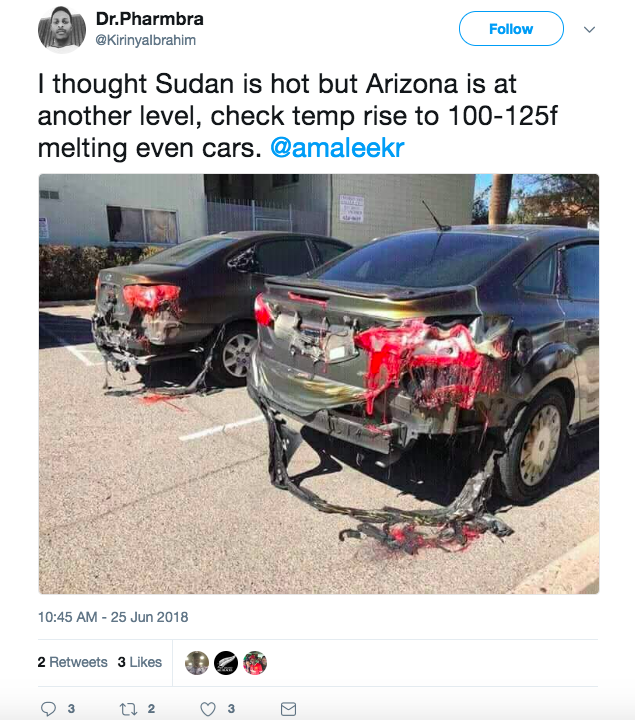 They are melting, but it’s because of a nearby fire and not the heat. Not today, anyway.

#4. The giant hornet is literally a giant. 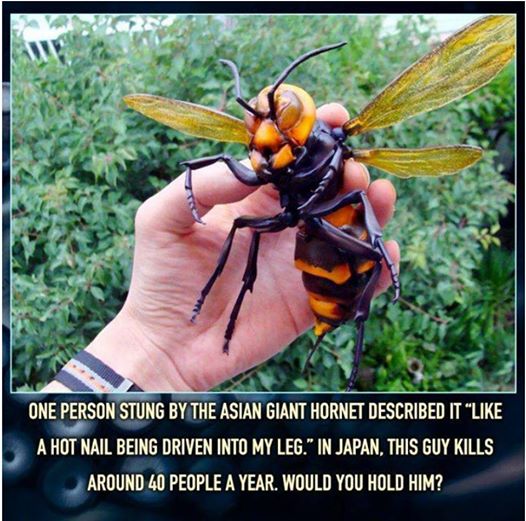 This image has of the insect has been floating around for a while now, and while the description of the hornet’s sting (like a hot nail) and the number of deaths it can cause in a year are true, the size is definitely not. The one in the picture is a 3D model. Here’s what it actually looks like (still terrifying, if you ask me): 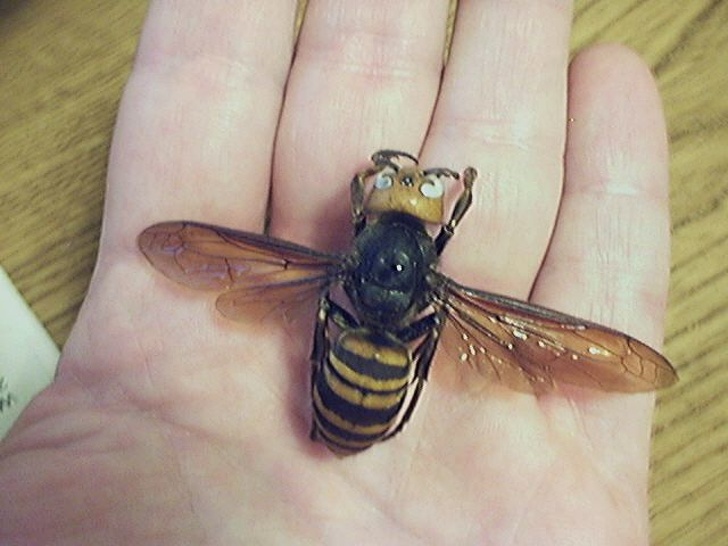 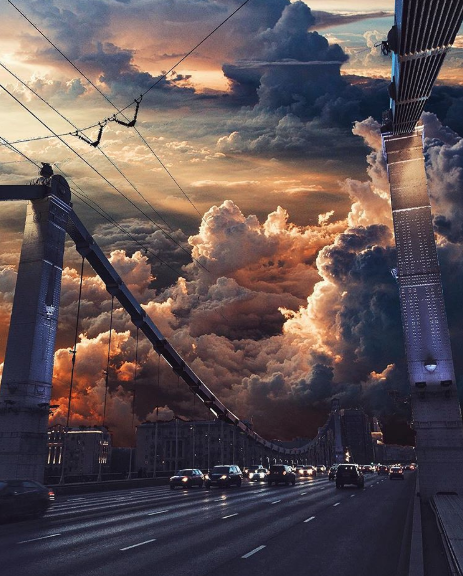 This popular “not Photoshopped” image is…sort of telling the truth. Except it’s two non-Photoshopped images put together – the sky was taken from Dutch photographer Marieke Mandemaker and put behind a photo of Moscow’s Krymsky Bridge. 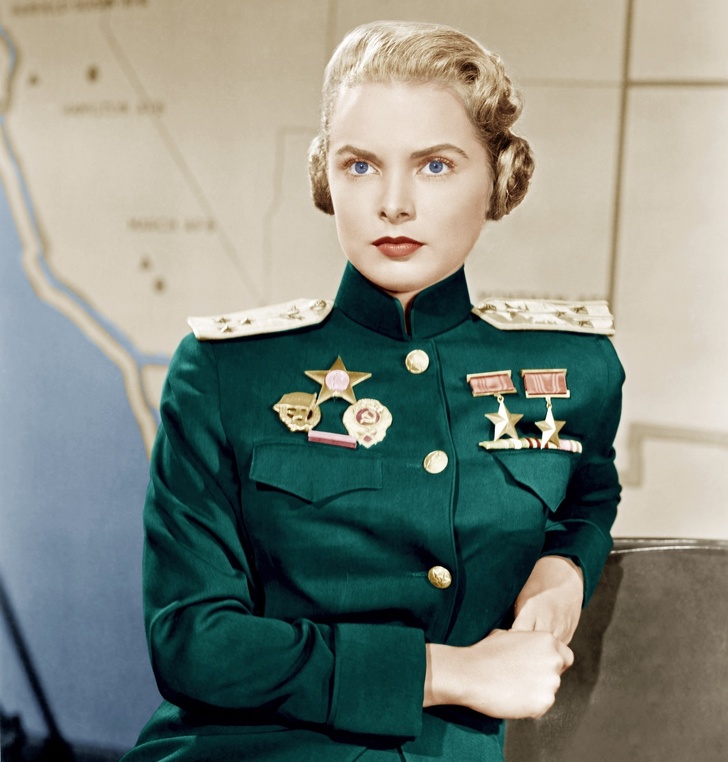 Not only is Melania Trump originally from Slovenia, not Russia, but the photo is of actress Janet Leigh playing a Soviet spy in Jet Pilot, a 1950s film.

#1. This image of a whale that died from eating ocean trash. 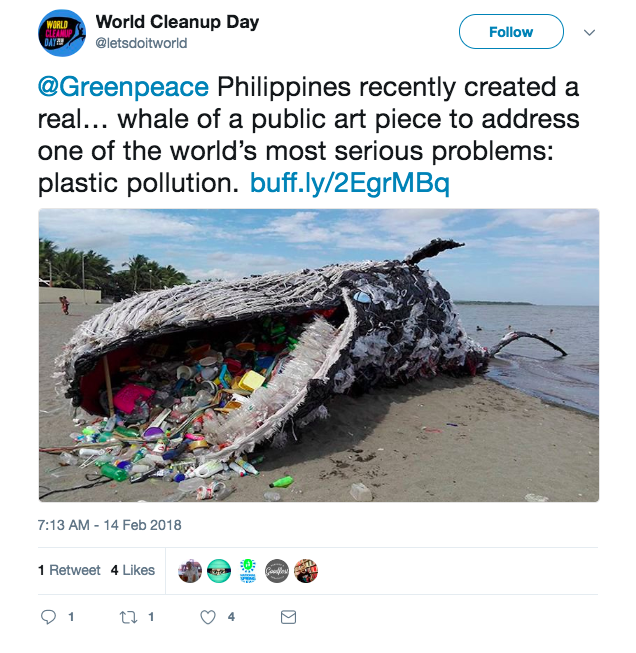 Though plenty of ocean animals are killed by pollution and garbage every year, this particular image is an art installation created by Greenpeace and displayed in the Philippines.