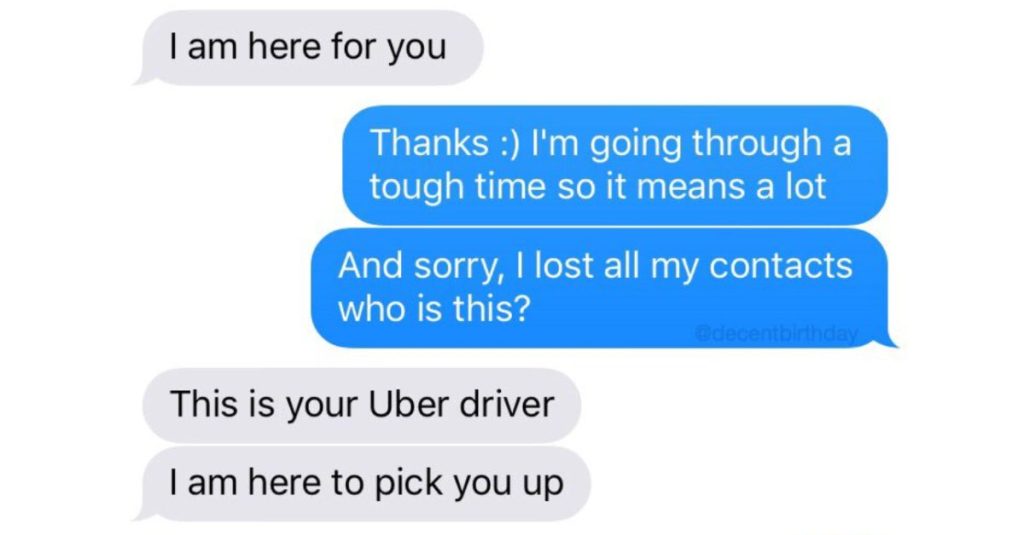 Are you ready to cringe?

I mean, are you REALLY ready to cringe?

Well, we sure hope you are because we’ve got a heapin’ helpin’ of awkward stories that people shared that are sure to make you shriek in horror.

Just be glad they didn’t happen to you, okay?

Let’s see what went down…

Also, this story is amazing.

I wonder if they ended up working out in the end…

My roommate went on a bumble date and was nervous so decided to pound shots in her car once she got to the place they were meeting and the guy was parked next to her and watched her chug vodka for 5 minutes.

Also, go back there and get that pizza!

My man just FaceTimed me drunk as hell eating a slice of pizza while walking down the street and he goes YOU WANNA KNOW HOW PERFECT YOU ARE? LOOK AT THIS PIZZA… FOR YOU, I’LL DROP THIS PIZZA. IT’S GONE! and just threw the damn pizza into the street

4. This is one of the best tweets of all time.

Go ahead! Find a better one!

It was a quiet car ride pic.twitter.com/F9ubGUoHAI

But you should still be embarrassed.

Airport cashier: "Have a safe flight." Me: "You too!" I CAN NEVER COME HERE AGAIN.

6. Hahahaha this is wild.

I guess she likes shouting orders…at herself.

13 years ago I ordered an m&m blizzard at Dairy Queen and the lady who took my order screamed “ONE SMALL M&M BLIZZARD!!!” at the top of her lungs then immediately turned around and started making it herself and it’s still the funniest thing that has ever happened to me

My mom just RUINED my dog and she literally said "he wanted to keep it long on the top" I am devastated pic.twitter.com/pjYuGYNhUm

How can you recover from this one?

my fiancé’s mother texted to check up on me and omg im gonna kms pic.twitter.com/Cn2iRGANLg

9. Tomorrow is gonna be awkward.

Do you understand what you’ve done?

@TheBloggess I texted my boss at the end of my FIRST DAY in the new job with: “Heading out. Love you.” intended for my boyfriend.

Get the hell out of here!

I wonder what her score was…

So this girl I volunteer with showed me this video last week of her leg giving out during a HS dive competition and I now watch regularly when i need a laugh pic.twitter.com/UalGTUeb9C

Must have been a busy night.

I was in Walgreens and a girl screamed out “this my third Walgreens who tf buying up all the plan b’s?!” ??? y’all know I died in there. Like crying tears

What’s your most cringeworthy story?

Talk to us in the comments and embarrass yourself, please!