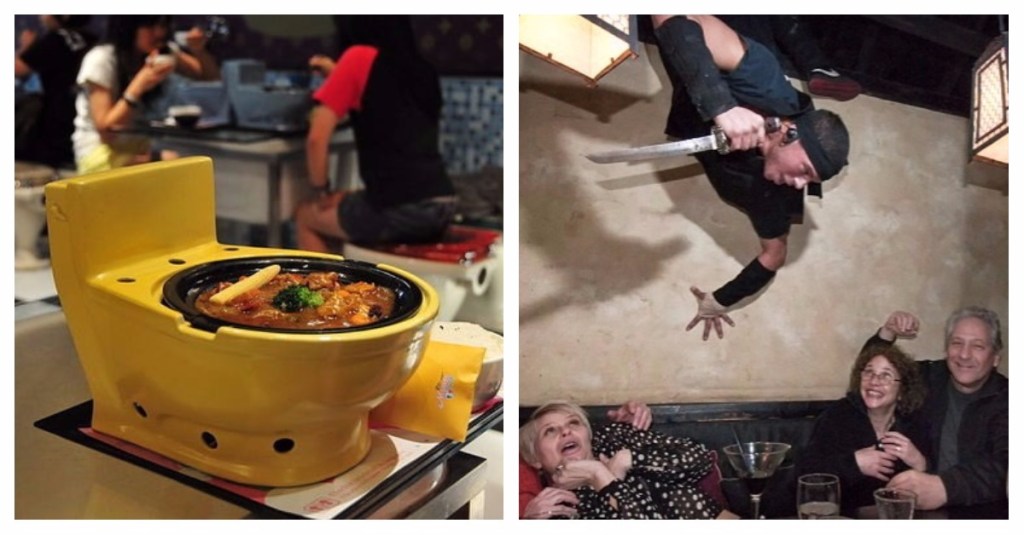 11 of the Most Unusual Restaurants in the World

Everybody loves eating at a restaurant. You get to eat delicious food you didn’t have to prepare yourself, and there’s no washing up. You literally can’t lose. But with so many restaurants out there, restaurant owners have had to get creative to stand out. That’s why theme restaurants started.

And THEN, when themed restaurants themselves became ubiquitous, restaurant owners had to get even more creative. And weird. And to some people, way gross.

These are 11 of the most creative and unusual theme restaurants around the world. Bon appetit! 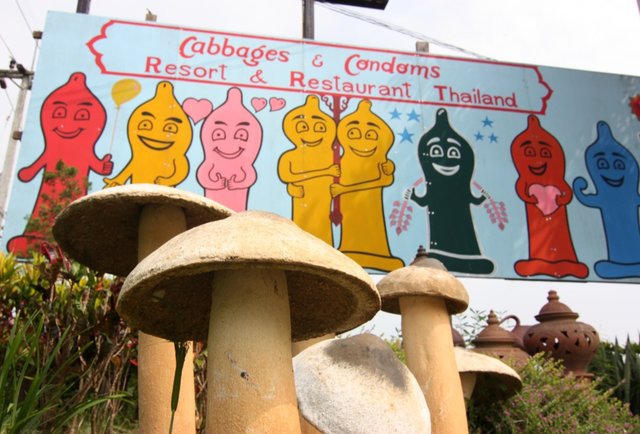 People have been combining food with sex since time immemorial, but rarely do you see a restaurant that does that so explicitly. “Cabbages and Condoms” is the brainchild of Thai politician Mechai Viravaidya, who devoted his career to spreading awareness about family planning – often with a whimsical flair. Some of his ideas included: condom blowing contests for school children, getting taxi drivers to hand them out to passengers, and this restaurant where, instead of receiving an after-dinner mint with your bill, you get a rubber.

C&C’s slogan is “We guarantee you can’t get pregnant from our food,” which more restaurants should definitely use. 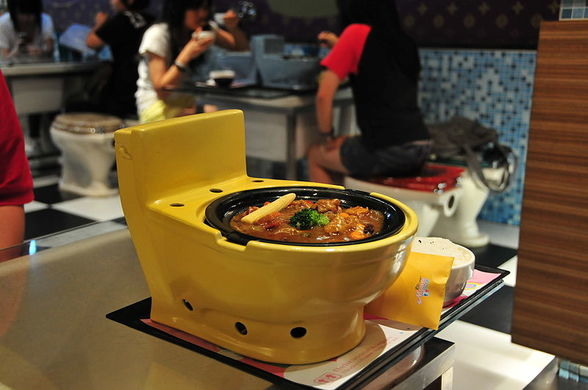 Who wants to eat a heaping bowl of chili out of a toilet? I don’t, either, but if you do, “Magic Toilet” has you covered. It started as an ice cream parlor that, appropriately, specialized in chocolate soft serve that came in a toilet-shaped bowl, and now it has a full menu. The restaurant’s website claims that it all started when one of the founders was reading a Manga on the toilet and inspiration struck. An American version was attempted in 2014 in Los Angeles, and there you could actually eat while sitting ON a toilet, but most people said the food was pretty crappy.

3. “Dinner in the Sky,” various locations 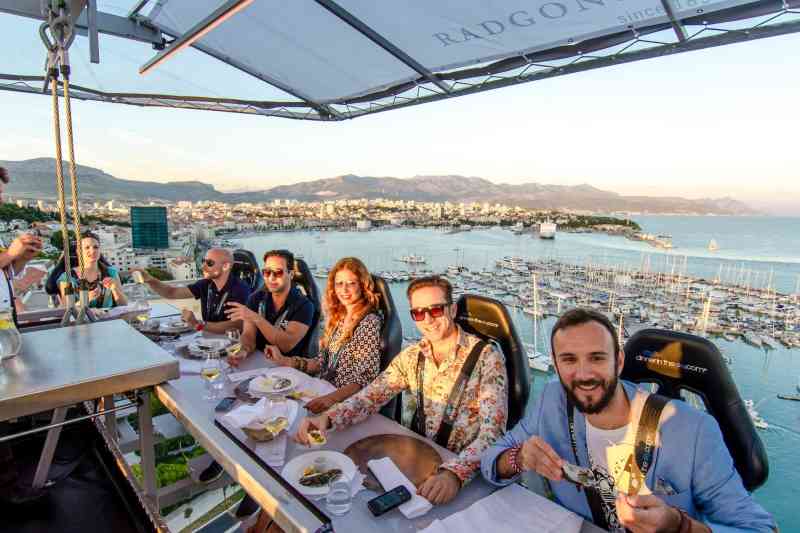 They say nothing whets the appetite quite like crippling panic attacks caused by your fear of heights. “Dinner in the Sky” is exactly what it sounds like: a restaurant where you eat while suspended 15 stories above the ground: 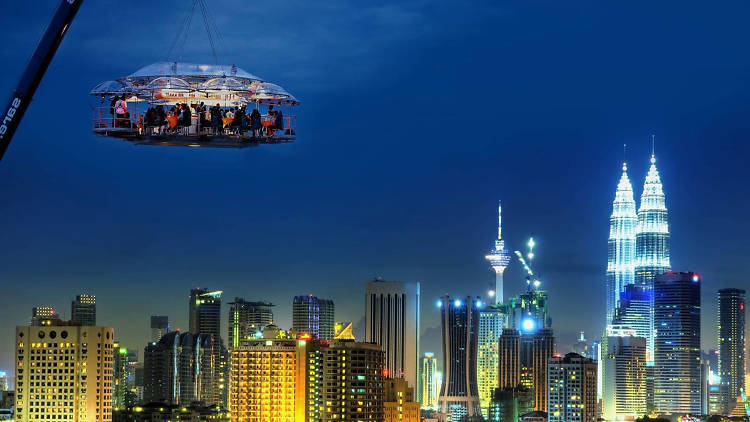 Photo Credit: Dinner in the Sky

Diners are secured in roller coaster-like seats, and then a hoist lifts them high off the ground. Once in the air, a team of servers secured with harnesses wait on them. And it only costs $399 a person. The cool thing is if you throw up during the meal there’s no way to know it was caused by the food or the altitude. 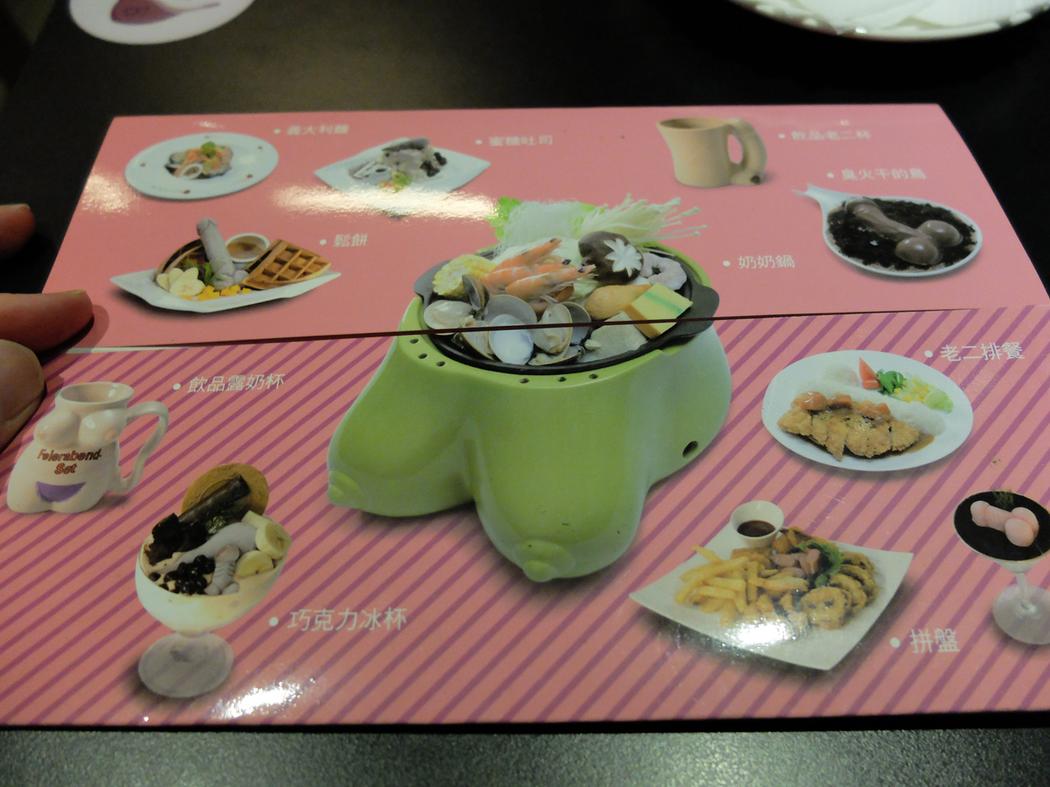 Imagine if a freight train full of bachelorette party gag gifts crashed into a comfort food bistro. That’s “FunnySex,” a sex-themed Taiwan eatery. But it’s not just sex-themed – as the name suggests, everything has to have a funny element, too. Customers eat comfort food out of bowls and dishes shaped like various genitalia, and some of the food is shaped like genitalia itself. If you wish, you can dine with a blowup doll, like this guy did: 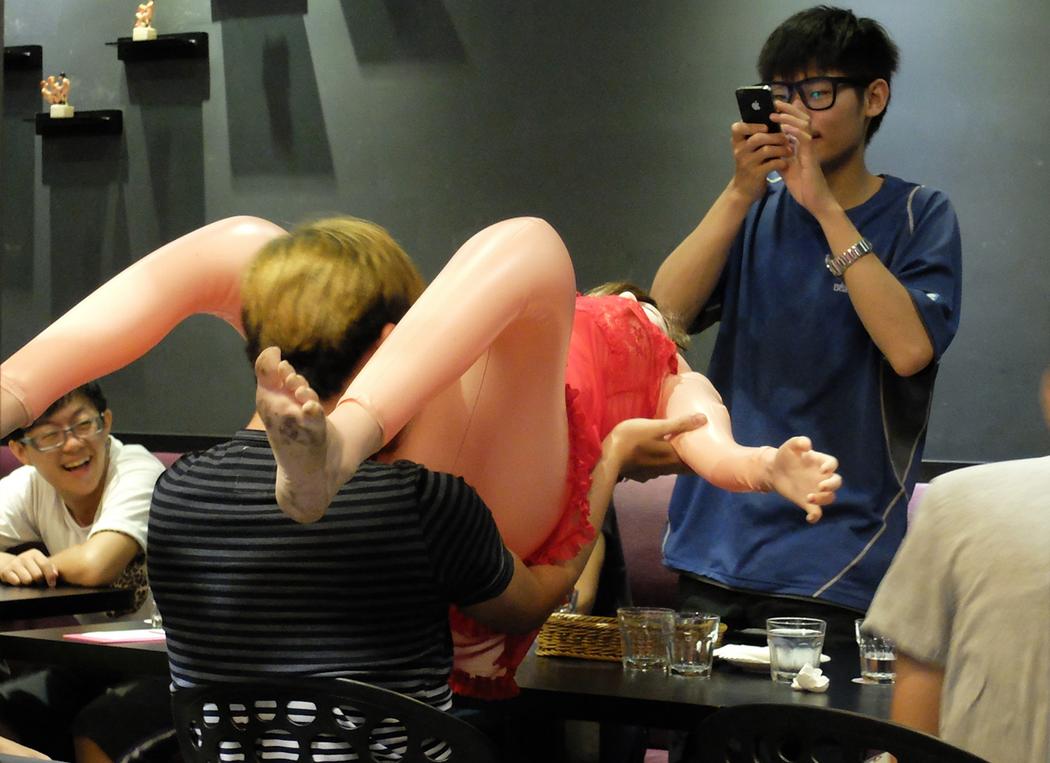 Unfortunately there are no double entendres about eating that can possibly be made about that photo, so I’ll just move on to the next restaurant. 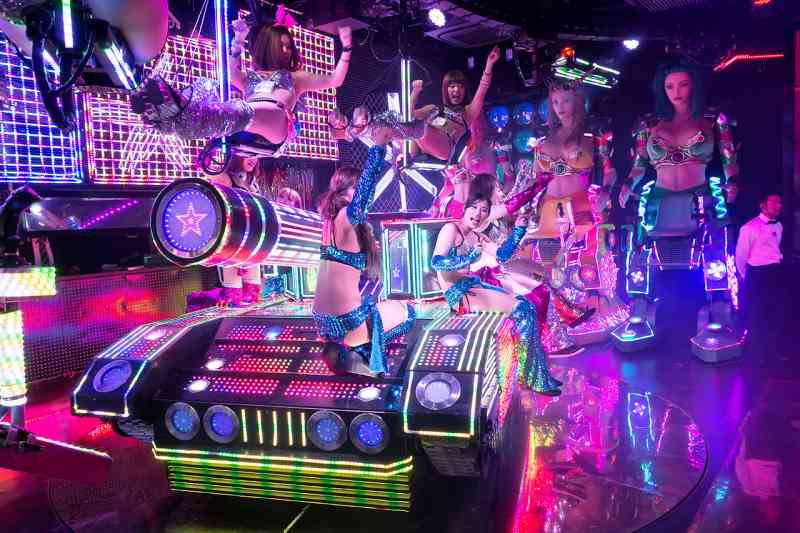 If you’re a fan of the 90’s Comedy Central staple BattleBots, and also enjoy eating, Robot Restaurant is for you. Four times a night for 90 minutes diners can enjoy a floor show in which Gundam-style robots do battle. So it’s like Medieval Times, but with robots, crossed with a Japanese version of Hooters, and it’s all covered in neon? I get a migraine just thinking about it! 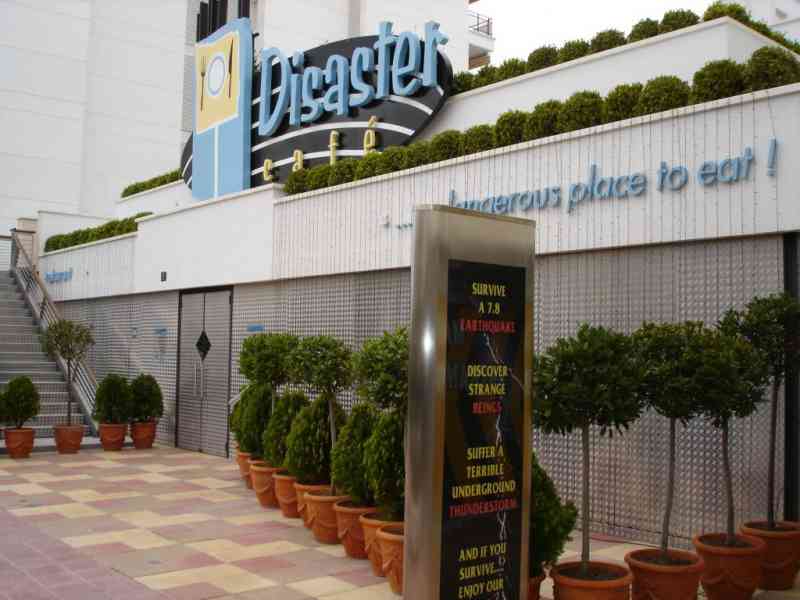 For the more adventurous among us, who don’t mind getting their clothes ruined, there’s “Disaster Cafe,” a restaurant that simulates an earthquake while you eat. Diners are taken into an underground cave where servers in construction helmets wait on them, and while they eat a simulated earthquake at 7.8 on the Richter scale strikes. My first thought when I heard about this was, “They must have something in place to keep your food from getting all over you.” Nope! That’s just part of it.

Here’s the restaurant in action:

The restaurant has since closed, but I’m hoping they owners return with a seafood place where you’re attacked by a real shark. 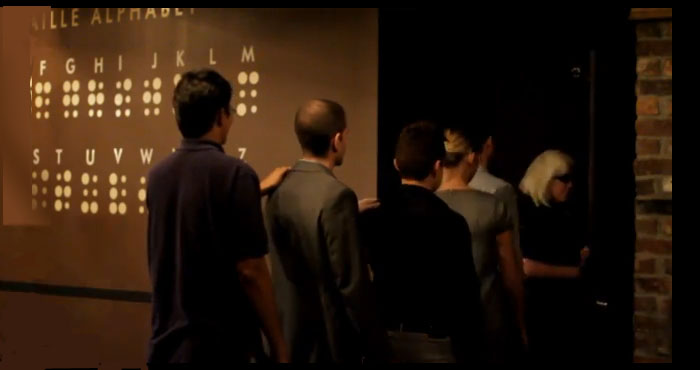 I would totally try this one.

Imagine that location but in total darkness. That’s the concept behind O.Noir, a restaurant that simulates the experience of being blind. The restaurant is completely dark and no light of any kind is allowed. It’s not about heightening your sense of taste. O.Noir aims to spread awareness of the experience of blind people. It actually started with Jorge Spielmann, a blind pastor in Zurich who would blindfold his dinner guests so they could experience the way he did. Today, both O.Noir locations hire servers who are all legally blind. 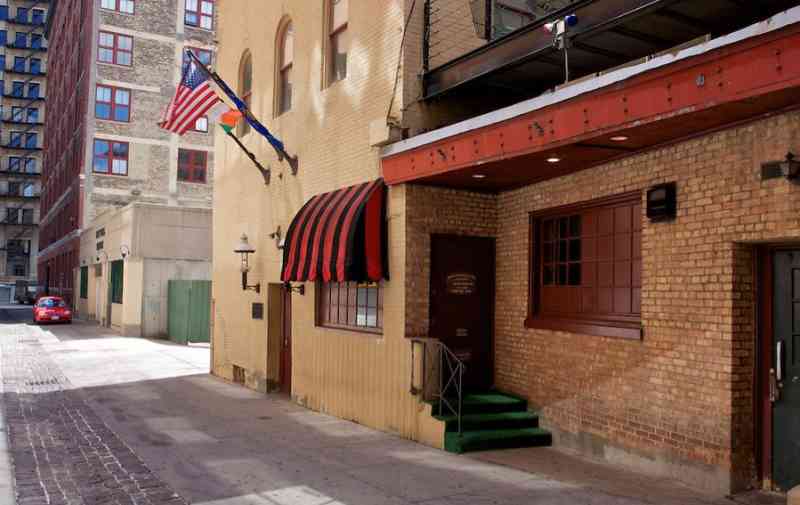 That building exterior might not look like much, and that’s the point. Safe House is a spy-themed restaurant that has no outside markings that might attract walk-up customers, because it’s trying to stay hidden – though really the secrecy is tongue-in-cheek because it’s been open since 1966 and attracts thousands of tourists a year. To enter the Safe House, you have to give them a password, which they’ll email to you once you enter some info into their delightfully spy-themed website. And then once you’ve given the password, a staff member gives you a silly task like hula-hooping…which is recorded on closed-circuit TV for the other patrons to watch at the bar. 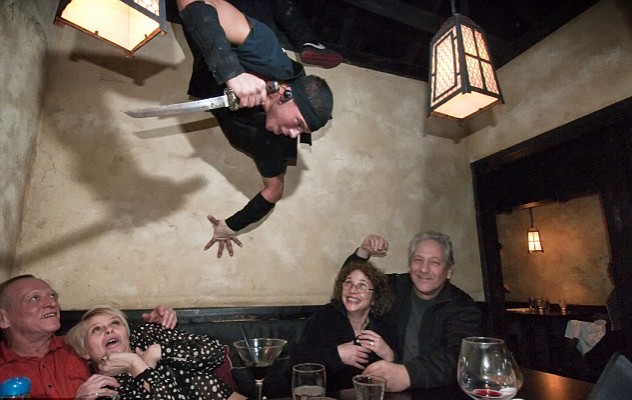 Ever wanted to enjoy Japanese cuisine while being stalked by silent killers? Then check out Ninja New York, a ninja-themed restaurant in the Tribeca neighborhood. The wait staff all dress like ninjas and perform magic tricks and origami for the customers, and they incorporate their ninja swordsmanship into the food preparation. So it’s like Benihana but a bit cooler. 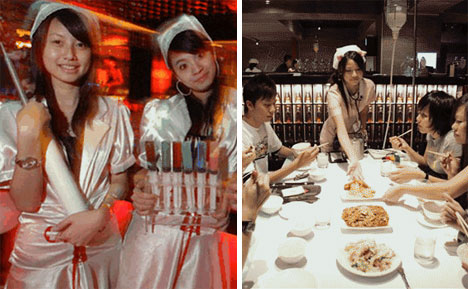 Another entry from Taiwan on this list, and for good reason – Taiwan is home to a LOT of unique theme restaurants, like this one, which is hospital-themed. Reviewers say the food is much better than restaurant quality, and unlike most hospitals you can order booze. This is how it’s served: 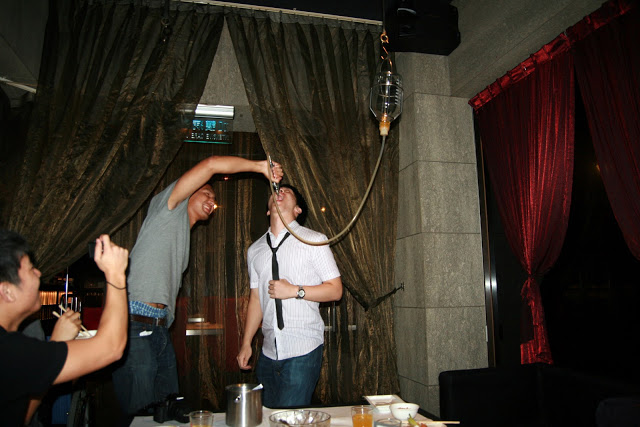 Photo Credit: A Taste Of Koko

Not sure if they provide you with a bed pan to use at the table, so probably best to bring your own. 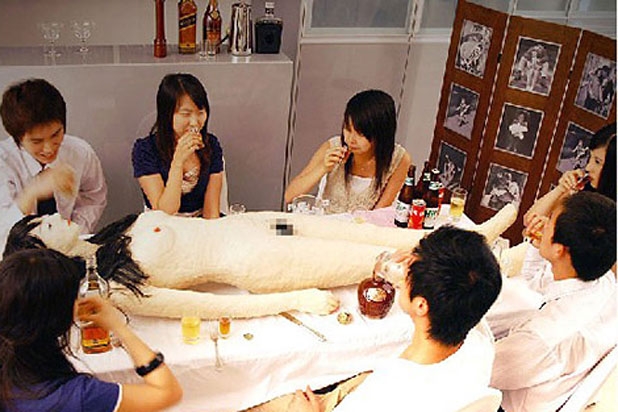 Maybe you’ve heard of Nyotaimori, the Japanese culinary practice of eating sushi off a naked lady’s body beloved among Yakuza everywhere. Well, presumably there was at least one guy who had Nyotaimori and said, “This is great, but I’d really like to eat the lady herself if you don’t mind.” Because that’s what you can do at Cannibalistic Sushi.

Not a REAL lady. Chill. It’s just a 5’8″ replica of a woman made entirely of food. It features dough for skin, sushi for guts, and blood red sauce. A waitress dressed as a nurse wheels the food body out on a gurney, and then slices it open with a scalpel. Diners can then dig into the body and enjoy as much grub and awkward eye contact as they can handle.

Maybe some day there will be a restaurant where you can get your Donner Party on, but until then this will have to do.