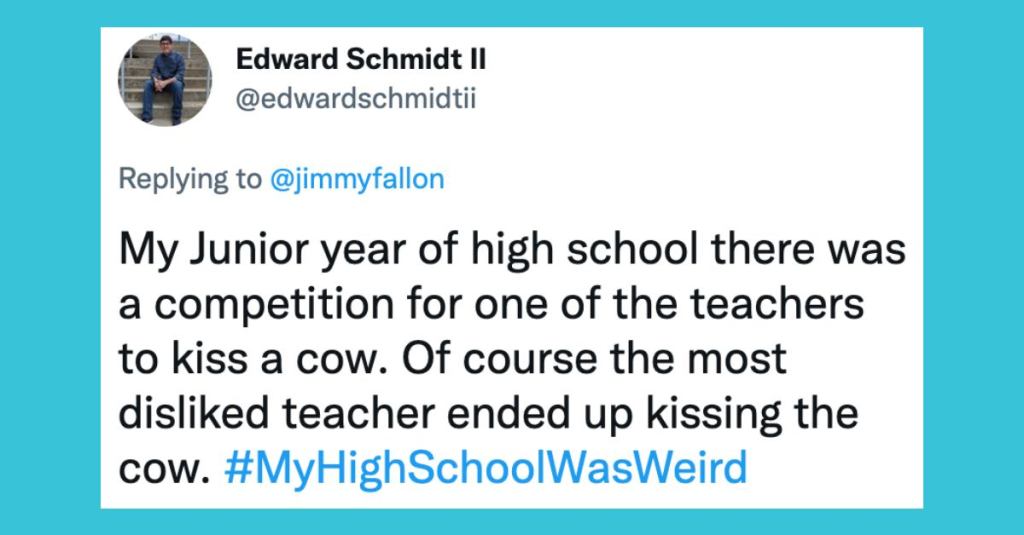 11 People Share Weird Things That Happened at Their High Schools

Every high school in the world has some weird stuff going on in those halls.

A bunch of kids are thrown together for roughly seven hours every day, so you know things are bound to get wild.

All-girls Catholic HS in Brooklyn a zillion years ago. Penny loafers were part of our uniforms, so we put pennies in them. The nuns said, “No!” So, we put dimes in instead. Told the nuns we needed them for a pay phone emergency. #MyHighSchoolWasWeird

I wonder if that was on purpose.

My science teacher was convicted of a double murder during summer break. I wish I was kidding!

Big achievers at this school!

My high School was called Start. The student motto for it was Start High Stay High#MyHighSchoolWasWeird

Well, it sounds like they knew what they were doing.

#MyHighSchoolWasWeird
In the 60’s during hunting season Sept-Jan many young men brought their guns to school because they would hunt b4 and after school.
Gun racks were common place and no one got shot. pic.twitter.com/Mm8rFMcUS2

Was it the town from Footloose?

#MyHighSchoolWasWeird
We did not have a prom because dancing was evil and could lead to premarital sex.

I went there a New York City public high school in the late sixties. It had a swimming pool. For some reason no bathing suits allowed. Nude swim. For 2 years 75 naked boys playing naked water polo. I knew girls were allowed suits in their class. Asked why. “Health reasons!”

And the bandit was never caught…

One time a swim meet was canceled at my friend’s high school because the pool “caught on fire.” Still have no idea how that’s possible. #MyHighSchoolWasWeird

My Junior year of high school there was a competition for one of the teachers to kiss a cow. Of course the most disliked teacher ended up kissing the cow. #MyHighSchoolWasWeird

Was your high school weird?

If so, tell us some WEIRD stories in the comments.