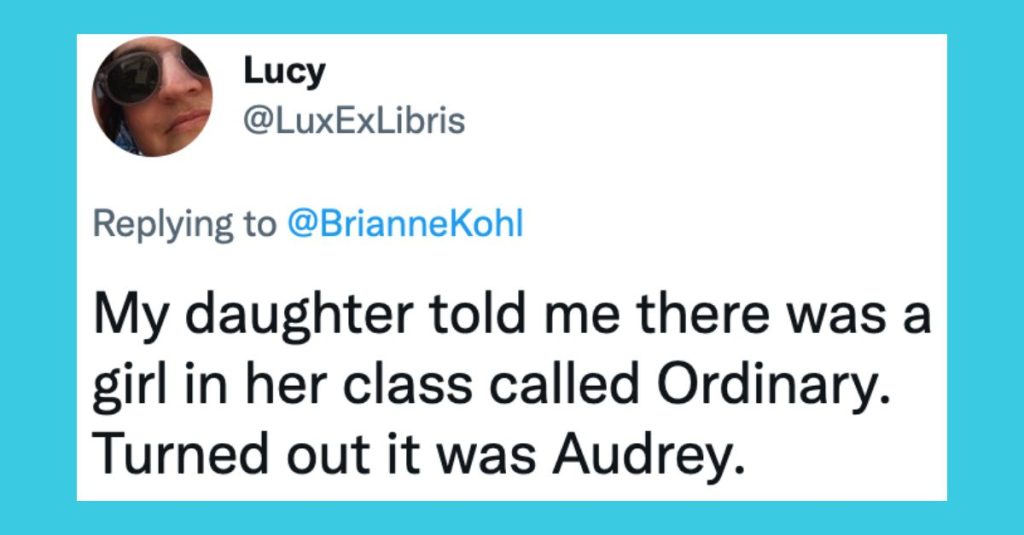 I have a confession to make: I’m terrible with names.

Sorry, I don’t mean to insult anyone!

It just is what it is…

Take a look at these tweets from people who got names wrong in a major way.

My 8yo daughter met a girl at summer camp last year named “Internet.” I said no way, that can’t be her name but my daughter has been adamant. For almost a year we’ve been having this discussion.

ANTOINETTE. I just found out her name is Antoinette.

My friend’s daughter insisted there was a girl in her preschool class named Chewbacca. It wasn’t till the class roster came out that they learned about Rebecca. ?

My daughter told me there was a girl in her class called Ordinary. Turned out it was Audrey.

For the good 7 years we’ve been calling our class mate Goat free. Only to be corrected by our English teacher in our first day of grade 8. He was Godfrey. Even he was shocked.????????‍♀️??‍♀️??‍♀️ pic.twitter.com/jewJINV55e

Our daughter insisted a kid in her 4K class was named Bastard. Baxter. It was Baxter.

My 2.5yo goes to daycare with identical twins named Maria and Aurelia but she calls them Maria and “More Maria”

My daughter told me her friend at school was called Chocolate.

In the same ballpark.

My daughter came home from the first week of Pre-K talking about her new friend Paper. We pored over the class roster to find her. Her name is Paige.

My mum was an infant school teacher. One of the kids thought God’s actual name was Harold. As in “Our Father who art in heaven, Harold be thy name.” ?

My 4 YO has a friend at school he calls Ugly. We got his bag of Valentines – her name is Oakleigh.

Have you ever done this?

If so, tell us what happened in the comments.