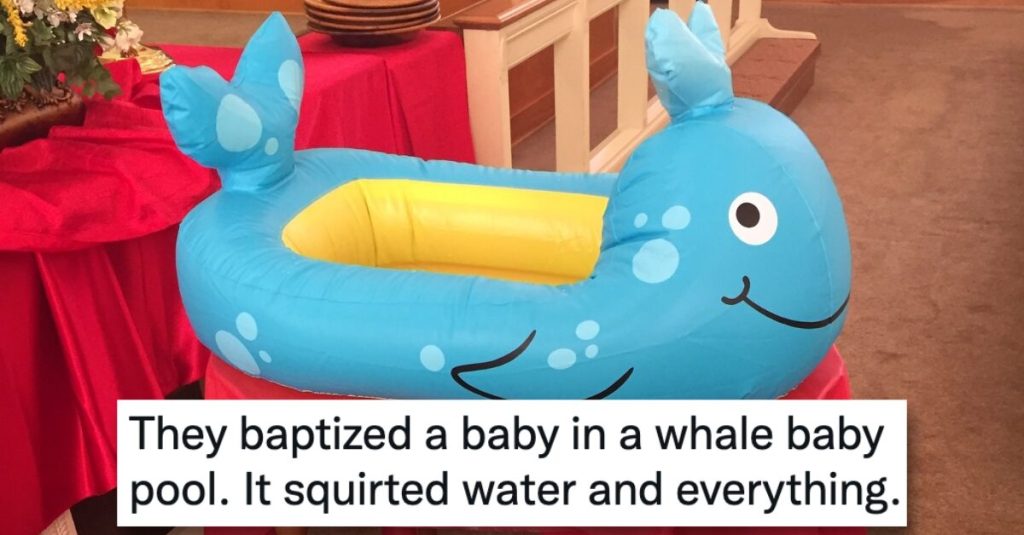 10 People Talk About the Wildest Things They Saw…at Church

I went to Catholic churches so you know that it was pretty run-of-the-mill.

Nothing too crazy going on…just the day-to-day Catholic mass.

But the folks you’re about to hear from have seen some crazy s**t at their churches.

Let’s check out what they had to say!

A woman stood up in the middle of a sermon (while it was dead silent) and yelled “SHUT UP GOD”. Whole church said pic.twitter.com/MWGbpVEO7m

Pretty wild in there!

1. Watched a dude walk up in the pew. Pushed the pastor and said I AM GOD in the middle of service
2. Dude caught the Holy Ghost and went running. Came round the corner a lil hard slipped and slid head first into the pulpit

Was at revival when a lady jumped up caught the holy ghost and punched the lady sitting next to her in the face https://t.co/H85vSFHyiL

Give it a shot!

They baptized a baby in a whale baby pool. It squirted water and everything. pic.twitter.com/nMQSihQ72W

A guest preacher was preaching, got too excited & he started cussing?? it got so quiet, one could hear a pin drop. pic.twitter.com/Yyl7NxD1Ig

Jesus would not approve.

My pastor was having an affair with his brother’s wife, had a whole town hall to expose them and then the boy cousins were fighting in the parking lot… it was a mess.

Someone stood up and booed the pastor while he was preaching, I’m talkin “BOOOO!” then walked out.
? https://t.co/WjuADeg9zI

And put on a show!

In Atlanta, Ga….a lady caught the Holy Ghost. Ran down the middle aisle while taking off her top….true story

A church member was giving announcements at our friends and family day. She had on an ill-fitting skirt suit. Her skirt fell down to her ankles as she departed the pulpit. She yelled out, “This would only happen to me Lord!” ????????

I wonder how that ended.

A man’s wife and kids show up on the day of his wedding.

What’s the weirdest thing you’ve ever seen at church?