Anyone who’s undertaken a creative project know that inspiration can come from the strangest sources. Maybe you paint your best paintings best at 5 a.m., or maybe you play your best Schubert while wearing green socks. And for one author, the muse visits most often in the waiting room of her local tire shop.

Amy Daws is an Amazon Top 100 bestselling writer who’s published 10 books that range from romance novels to pregnancy dramas, but until recently she only wrote in her spare time; she worked in TV advertising for her day job. She recently made the switch to writing full time, but found the transition difficult and stressful. Daws responded to this predicament with the one technique used by authors since time immemorial: procrastination. She needed an oil change, so she took her car to her nearby auto shop, Tires Tires Tires. There, hopped up on complimentary coffee, Daws decided to try working on her latest book, and to her surprise, cranked out over 4,000 words. 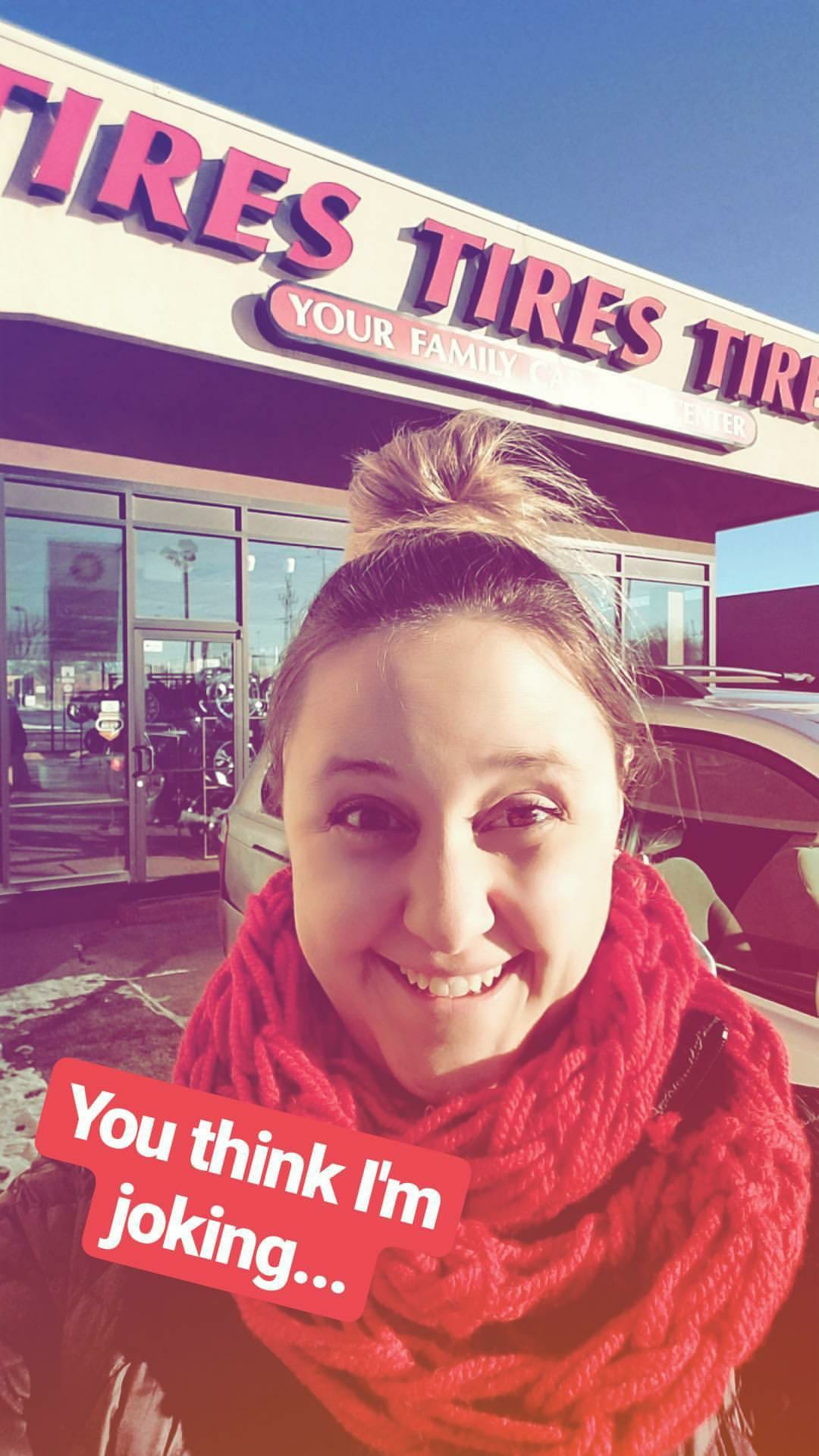 That night, Daws shared the story with her sister, who encouraged her to return to the tire shop to write some more. She even offered to let Daws borrow her car and take it in for an oil change, all so she would have an excuse to hang around the waiting room. Daws did exactly that, and had another productive day in the waiting room.

Soon, Daws was contacting everyone she knew asking to borrow their car, and her productivity spiked. But eventually, she ran out of friends and family to borrow cars from, and knew she would have to approach Tires Tires Tires with an unusual request: could she use their waiting room without being a paying customer?

It was around this time that Daws received an invoice on the tire shop’s letterhead, billing her for all the free coffee and cookies she’d consumed. “Complimentary” has its limits, after all: 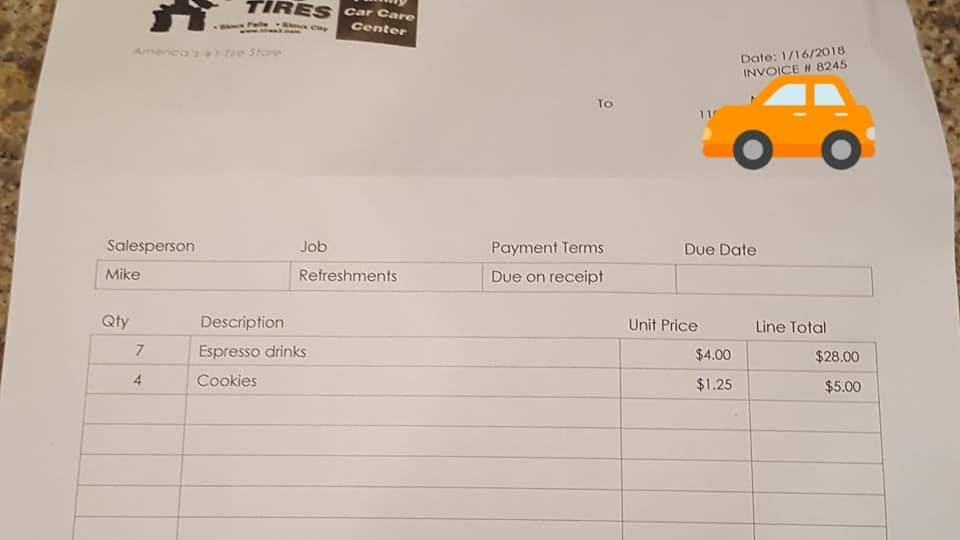 It looked like jig was up and Daws would have to find another place to write. Then she got a text from the Tires Tires Tires general manager: 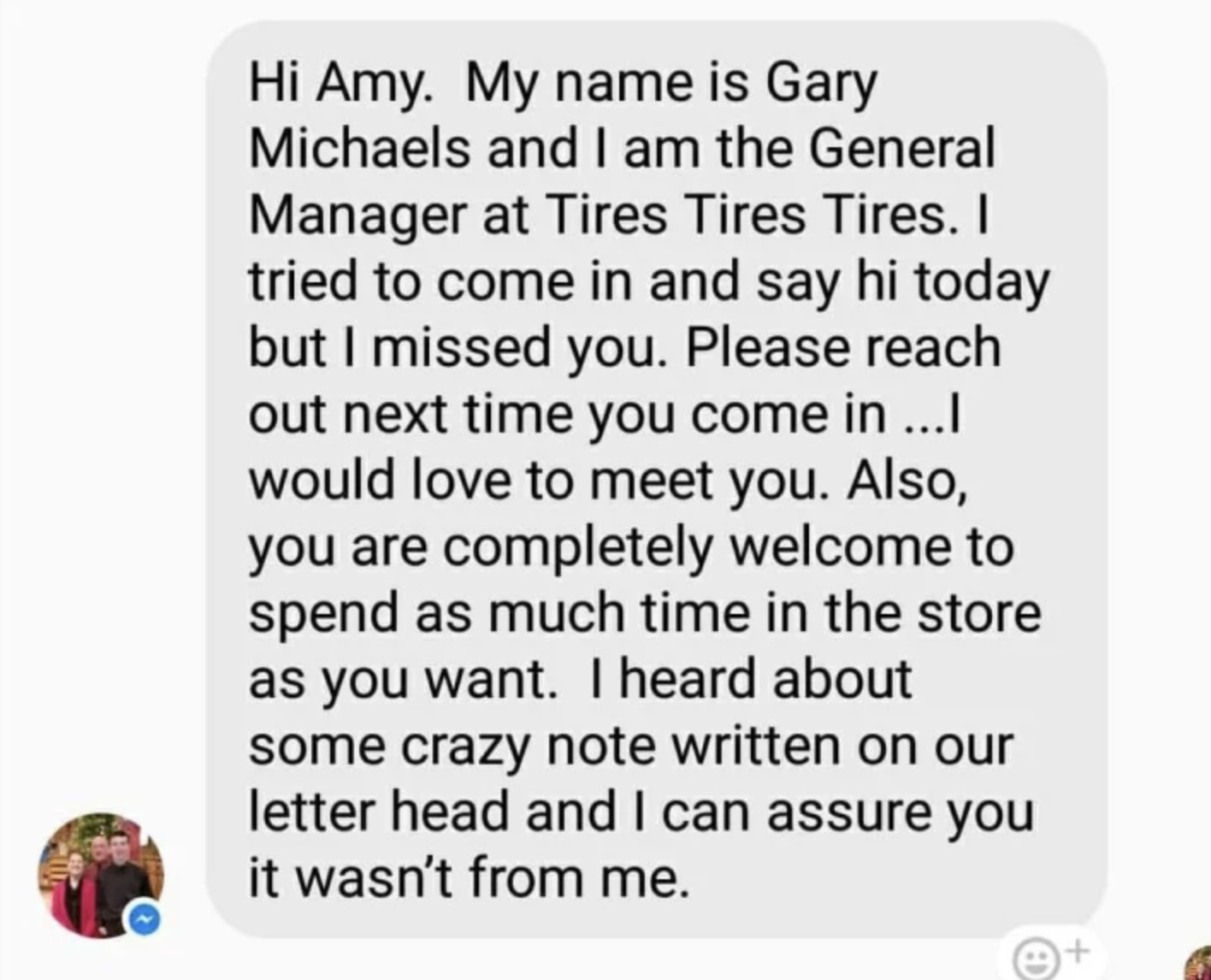 Success! The invoice, by the the way, was a prank from one of her friend, and a pretty darn good one at that.

Daws quickly became part of the Tires Tires Tires family. She got her own designated seat in the waiting room: 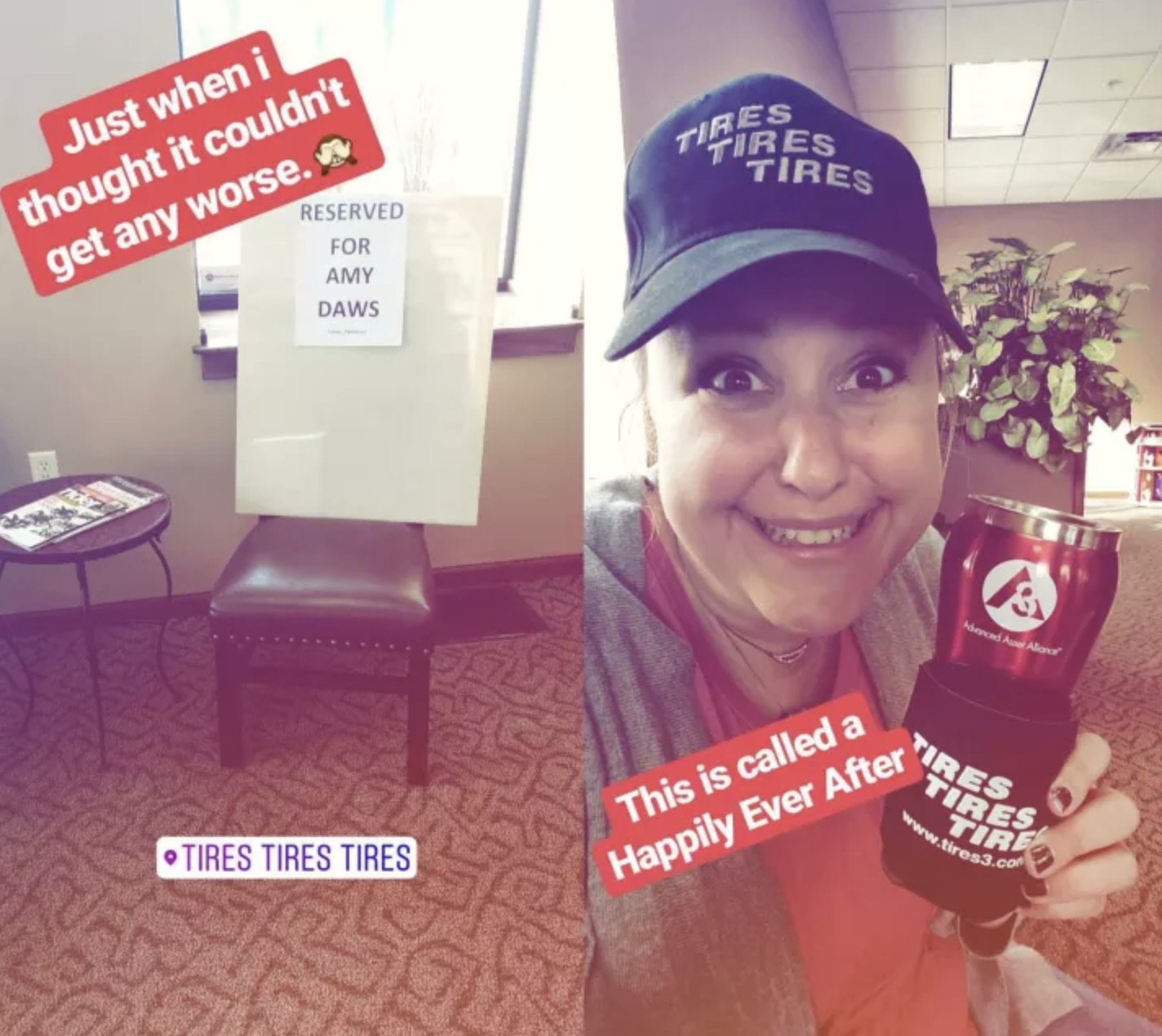 When the book was finished, Daws got a shout-out on the marquee. 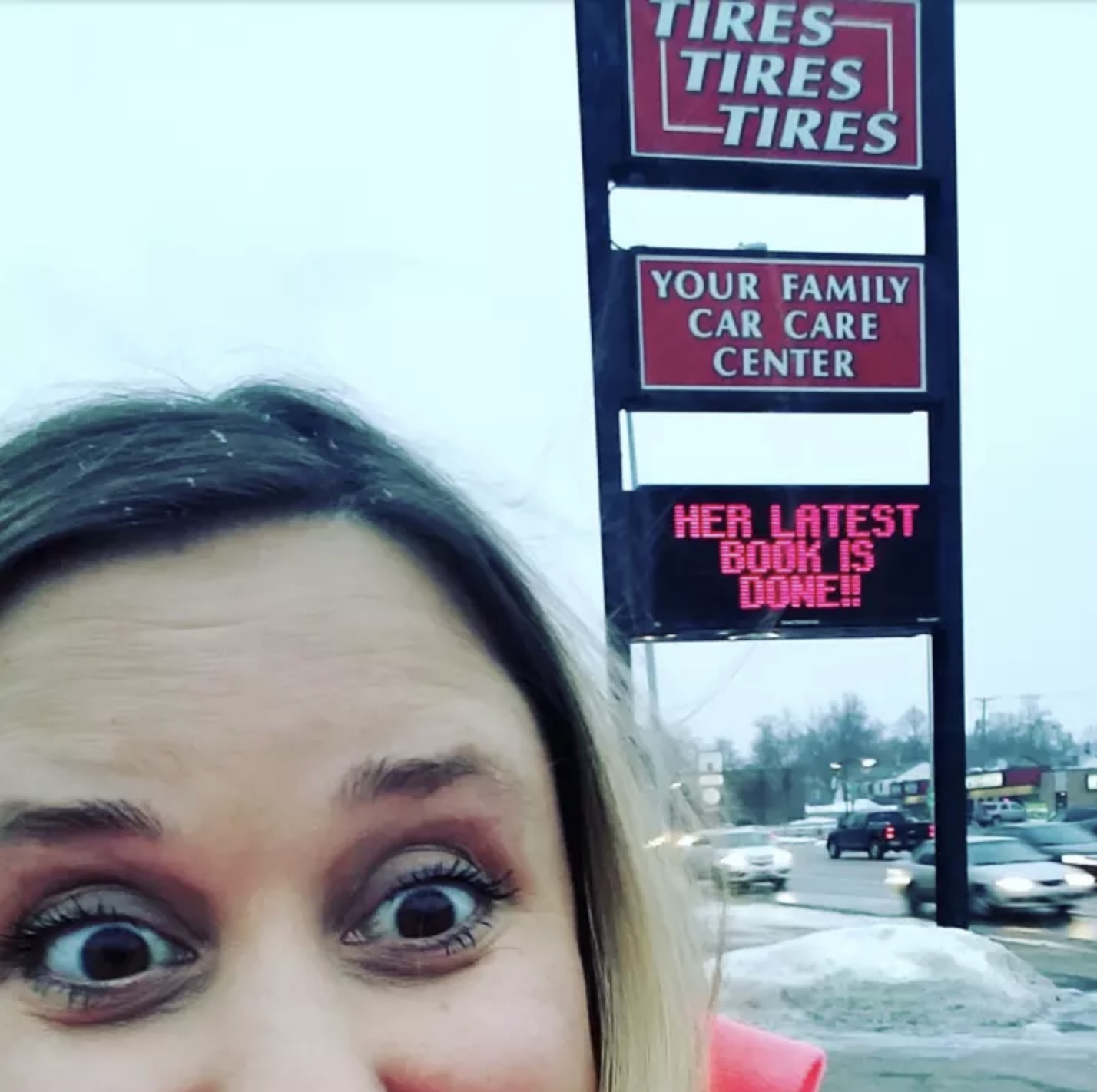 And best of all, Tires Tires Tires made Daws became the world’s first “writer in residence” for a tire place:

But that’s not the end of the story! Because Daws has another book coming out this year. You can guess where you’ve heard of this story before: 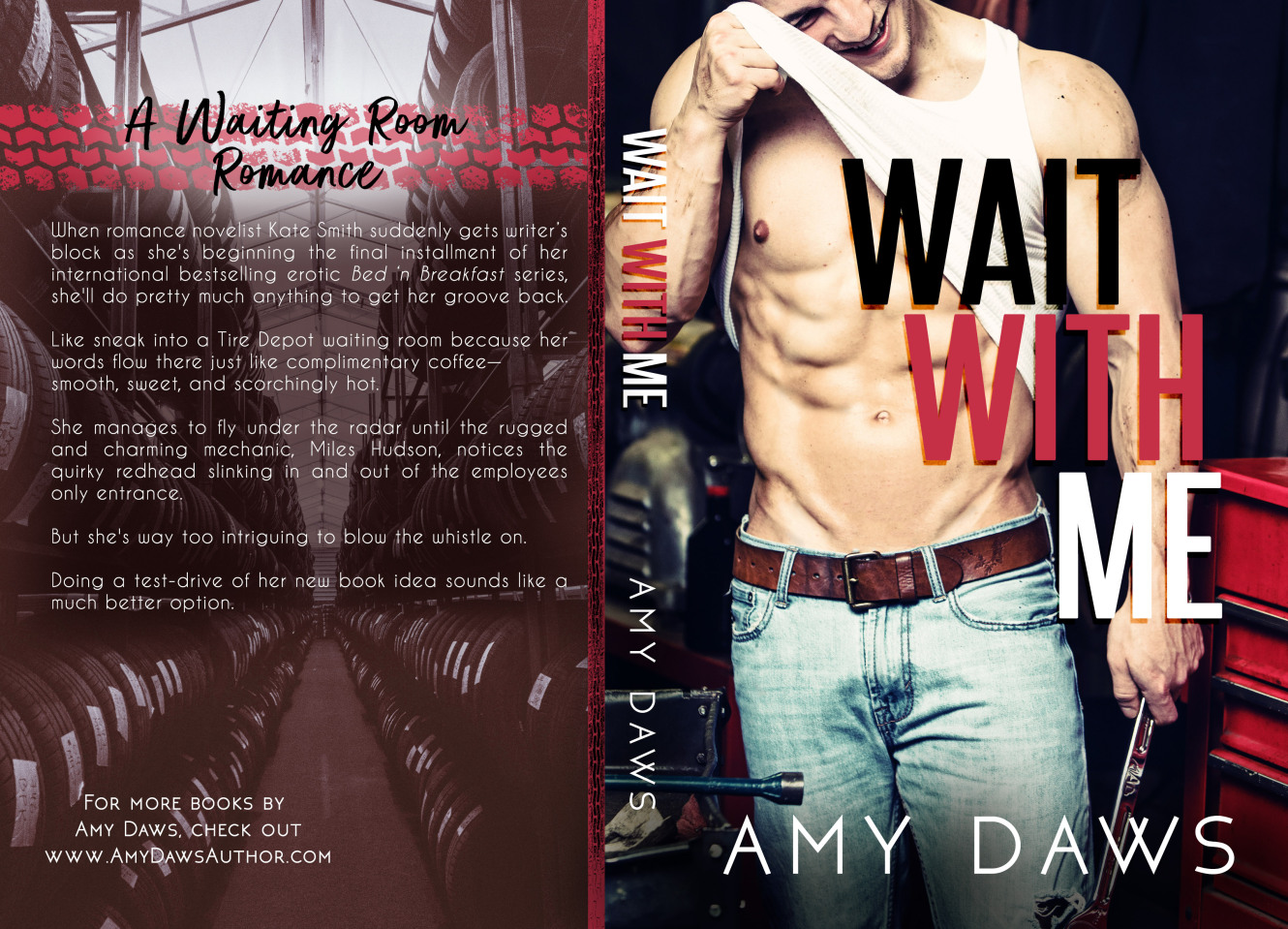 Like sneak into a Tire Depot waiting room, because her words flow there just like complimentary coffee-smooth, sweet, and scorchingly hot.

She manages to fly under the radar until the rugged and charming mechanic, Miles Hudson, notices the quirky redhead slinking in and out of the employees only entrance.

But she’s way too intriguing to blow the whistle on.

Doing a test-drive of her new book idea sounds like a much better option.

Let’s just hope the waiting room is the only part of this story inspired by real life, and not the part about the mechanic with the 6-pack abs. Or if that part’s also true, let’s just hope Mr. Daws isn’t reading this.

15 Photos That Might Make You Say ‘Nope’ and Cover Your Eyes
Are You Single? Then These Tweets Will Make You Laugh…And Cry.
Check out These Funny Valentine’s Day Cards if You Want to Do Something a Little Different This Year
Jimmy Fallon Wants to Know: What’s the Most Awkward Breakup You’ve Ever Had
14 Amusement Park Employees Share Cringeworthy Horror Stories
20 People Who Are Total and Complete A**Holes