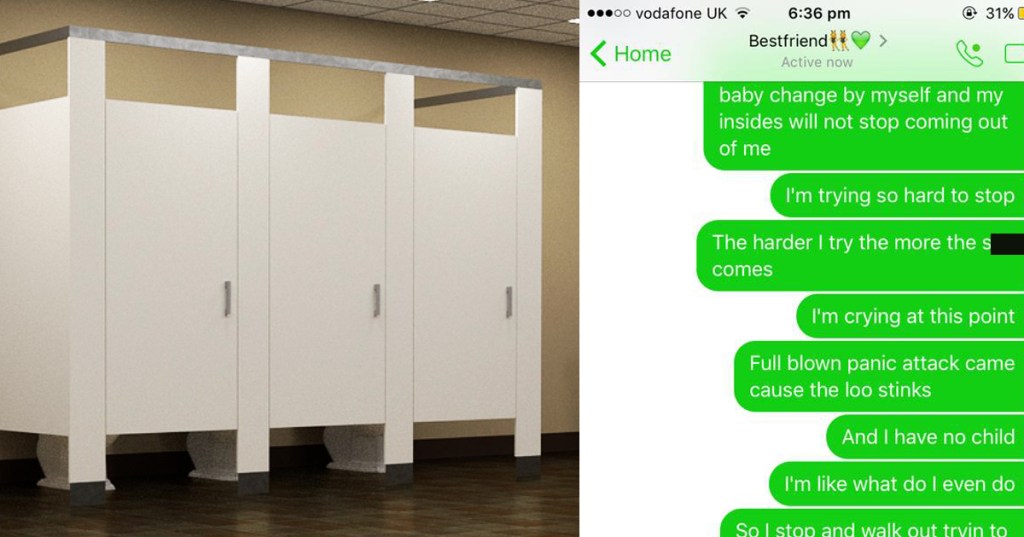 Growing up, we all heard fables and fairy tales that taught us lessons about life. But the problem with so many of these parables is that they were written in a time completely different from our own. Sure, Little Led Riding Hood is a classic, but its central warning, (“Watch out for wolves”), isn’t too applicable to our everyday lives.

What we need, then, are new fables. Cautionary tales that warn us about the perils of 21st century life. And it’s in that spirit that I nominate the following story to as a fable about the modern-day equivalent of a pack of wolves, health drinks.

Nicole McCourt, a young woman from the UK, recently shared a story with a friend about a trip the mall that turned into a nightmare–both for her, and for the people who shared the public restroom with her.

McCourt texted her entire misadventure to a friend, and later shared the conversation on Facebook, where it went viral.

McCourt’s story began when her mother sent her on an errand to a health food store. McCourt was only supposed to pick up some ginger. But then, she heard the siren song of the 12 calorie health drink. 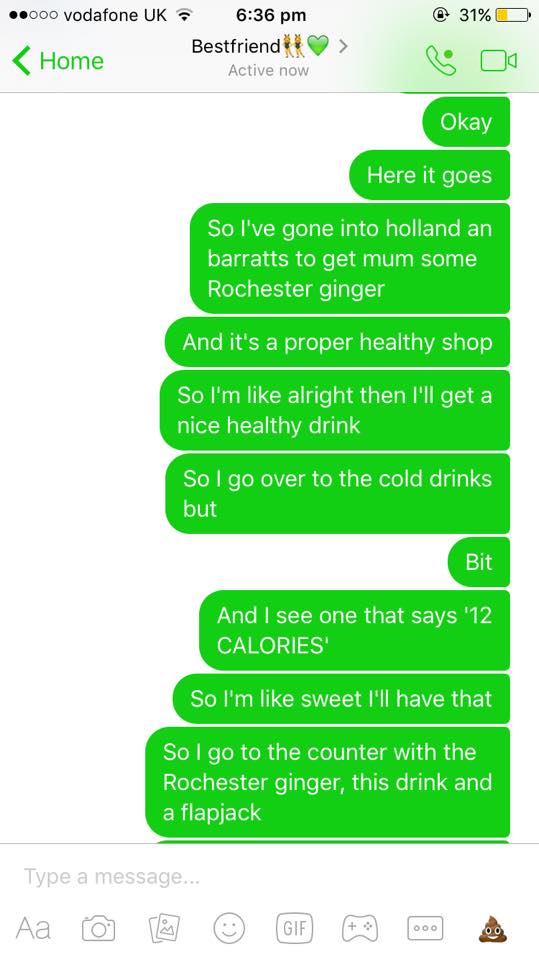 Like any good cautionary tale, this one has a warning in the form of a concerned cashier. 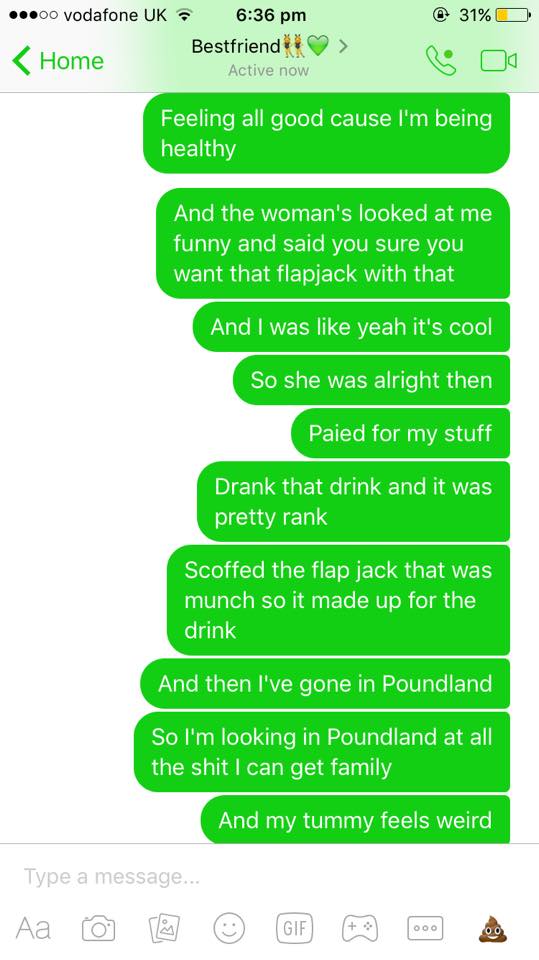 A weird tummy? Or an omen? 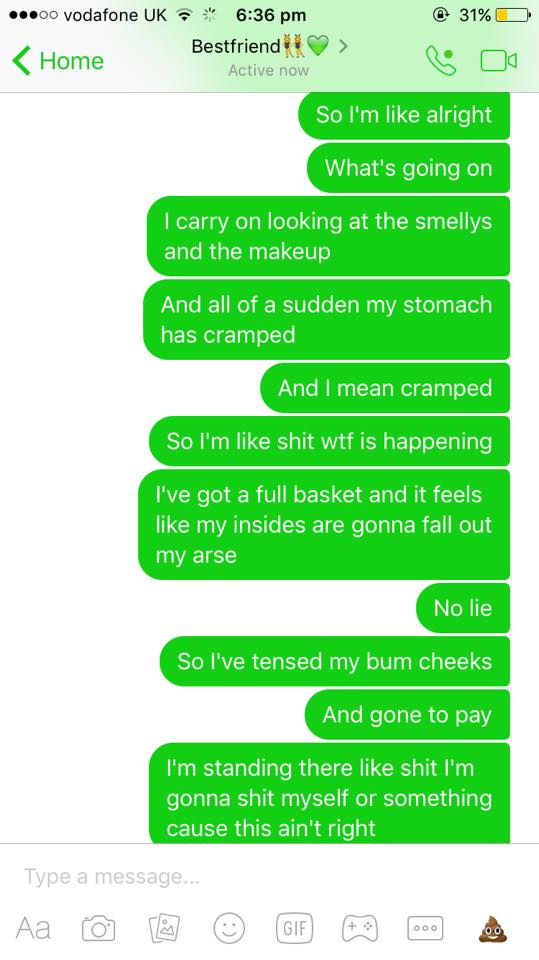 McCourt was faced with a dilemma: wait out the long line to pay for her items, or run to safety. 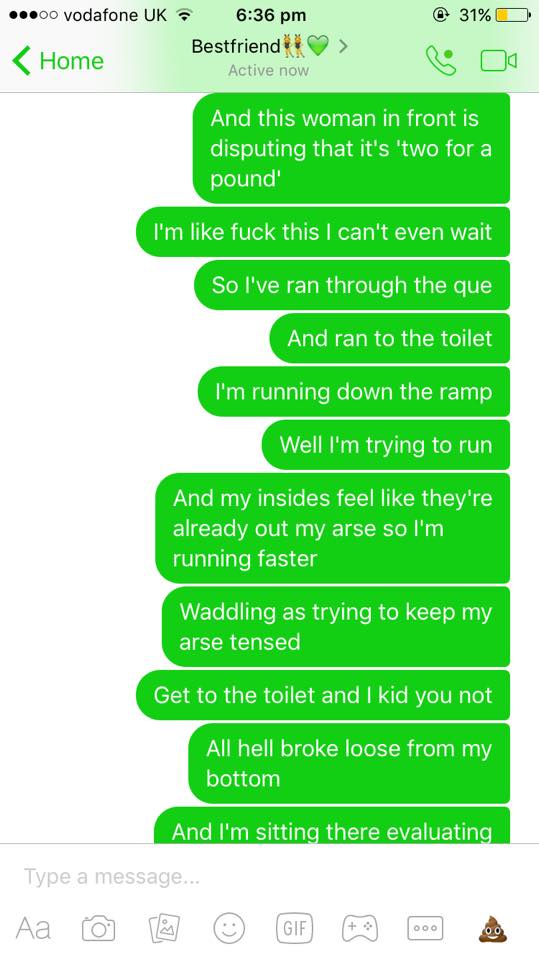 Having reached the safety of the toilet, McCourt remembered the cashier’s skepticism. She investigated her drink… 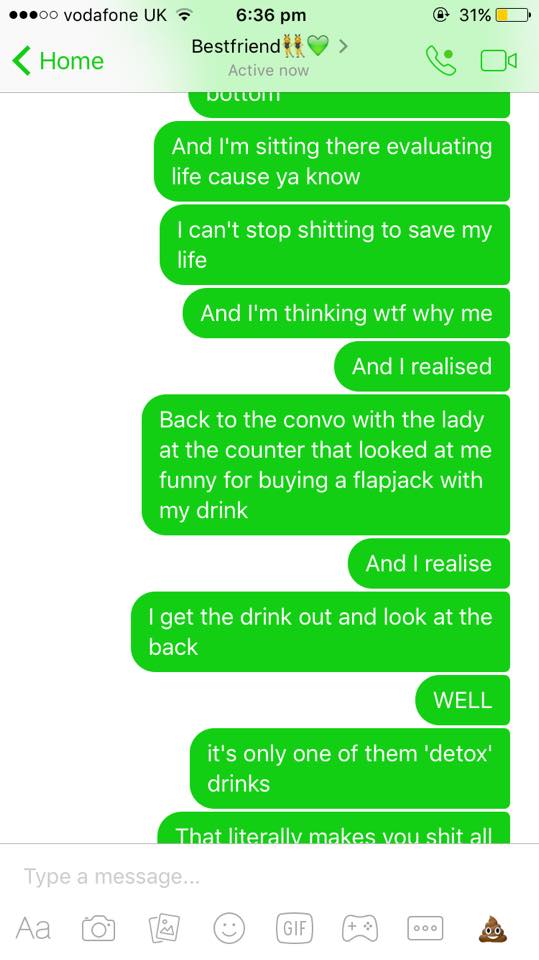 McCourt learned the truth, but her troubles were far from over. 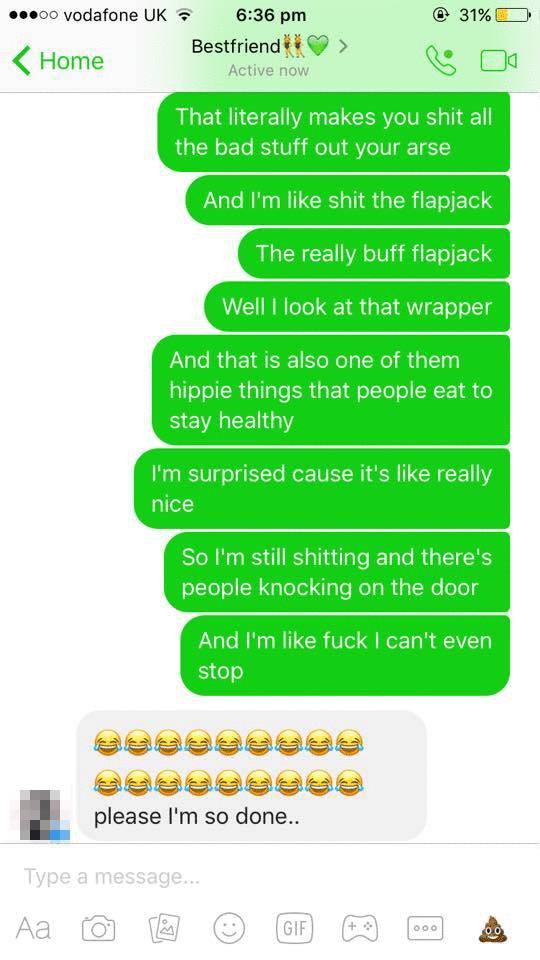 The situation escalated. It was becoming a biohazard. 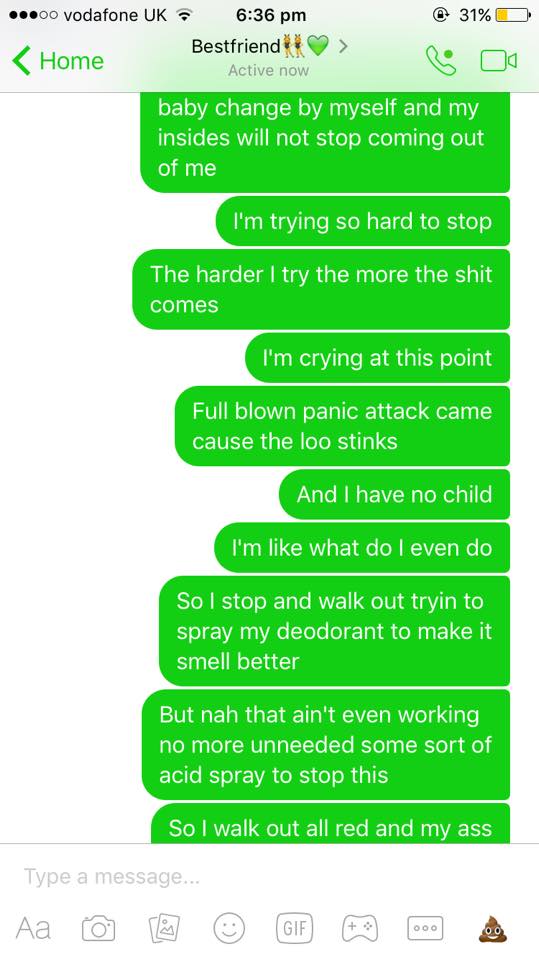 If nothing else, this story introduced you to the phrase “ring sting.” 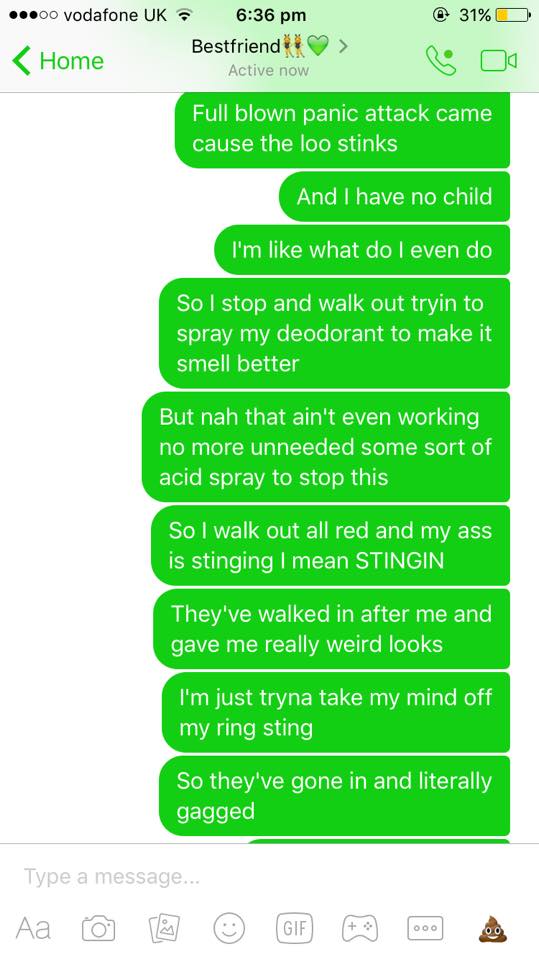 Bystanders were hurt! Children were traumatized! 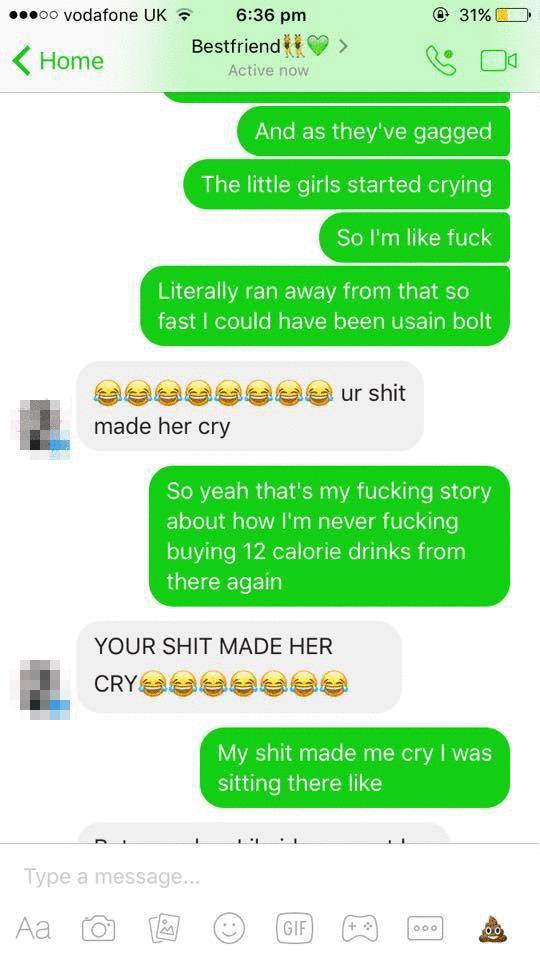 And life choices were questioned. 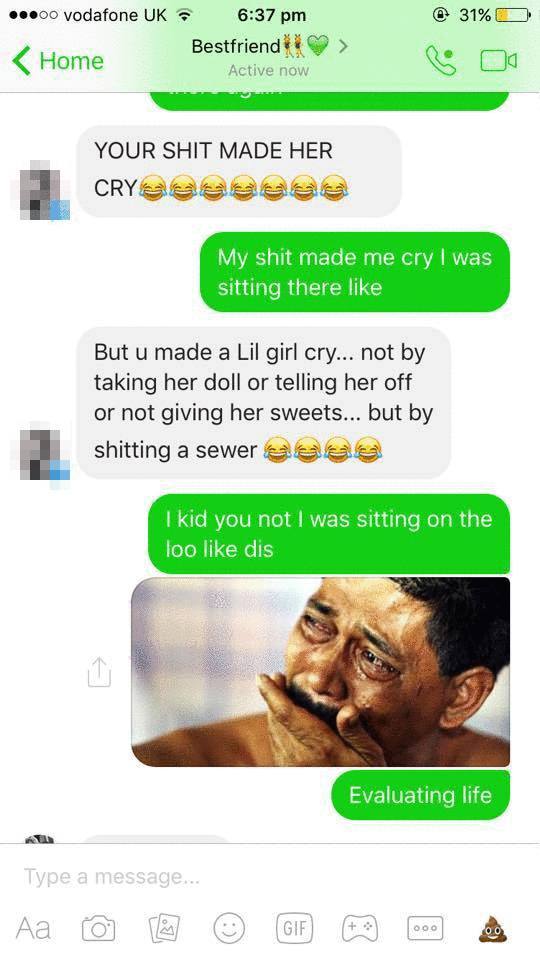 Let this story be a lesson to you, good people of the Internet! If a health drink looks tasty and only has 12 calories, check the label first. It might just be a demon in disguise.