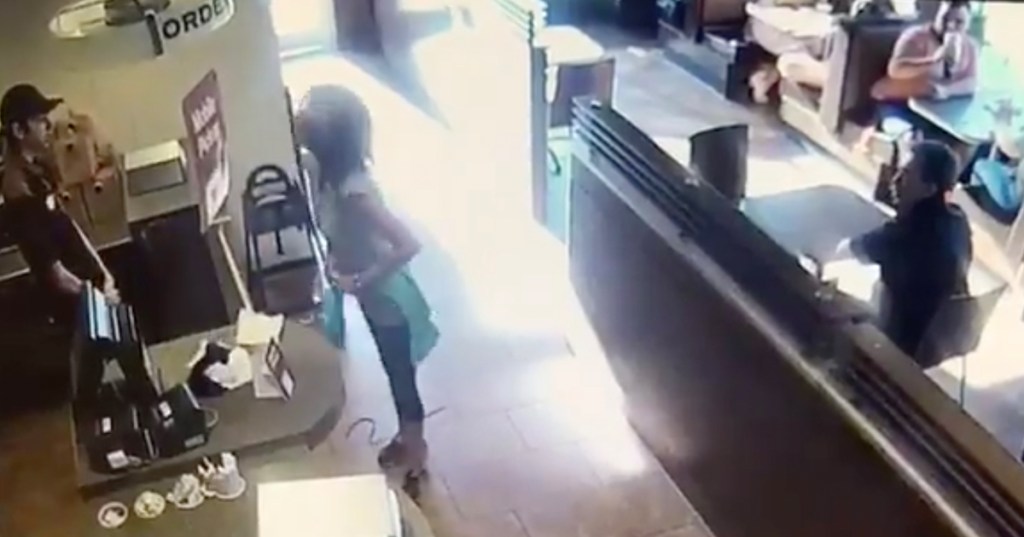 Look, we’ve all had a frustrating shopping experience. Sometimes we as customers can be entitled. Sometimes a company has too many rules that are unfair or absurd. No matter how nice a person you are, occasional conflict is inevitable. The best way to handle it is to try to stay calm and not escalate things.

That is not what this Canadian woman did. Not by a mile. (Sorry, kilometer.)

This past Monday, the unnamed woman made quite the stink at a Tim Horton’s donut shop in Langley, British Columbia. The woman asked an employee to open the locked restroom for her, but since she hadn’t made a purchase, the employee declined. Things quickly devolved into a shouting match, until finally the woman…dropped her pants and pooped on the floor.

But she wasn’t done. She then hurled her poo AT THE EMPLOYEE, (we don’t know whether she hit him), grabbed a handful of napkins, wiped herself, threw THOSE at the employee, and left.

The entire incident was caught on the shop’s surveillance cameras, and you can watch the video below.

Warning: Everything I just described is visible in the video! Yes, you “see it.” This video is not for the squeamish!

So today at a Tim Hortons 20 mins away from me this happened….???? pic.twitter.com/6aPRSu1w1M

The woman, who was previously known to police, was arrested by the Royal Canadian Mounted Police, and will attend a court hearing at a later date. Police said nobody was injured in the altercation, at least not physically.

Tim Horton’s released a statement backing up the franchise owner, and adding helpful context. “In limited cases across the country, restaurants have a restricted access policy for restrooms to ensure the well-being of our guests,” the statement read. “Our current understanding is that the Team Member used their discretion in this case and denied access to this Guest based on past behaviour and out of concern for the immediate safety of Team Members and Guests in the Restaurant.”

There’s a tiny part of me that’s on her side. We’ve all been out in public when we heard the call of nature, only to be denied access to a toilet. It’s distressing!

On the other hand, I can see why businesses don’t want to serve as the unofficial free neighborhood restroom. Plus, both the police and Tim Horton’s mentioned prior incidents involving the woman. They’re not telling us what those incidents entailed, but it’s not hard to imagine. You don’t go from being the perfect customer to poo flinger in the blink of an eye.

But we can all agree, regardless of your opinion on the public bathroom question, throwing your poo ain’t cool. There’s a reason we stopped being monkeys and evolved into Homo sapiens, people! Nobody wants to go back!

Not surprisingly, the story went viral, and people had many different reactions, but “revulsion” was by far the most common.

what did I just watch? People are crazy pic.twitter.com/gtBeZuVm1k

Some expressed their sympathy for the beleaguered Tim Horton’s employees: 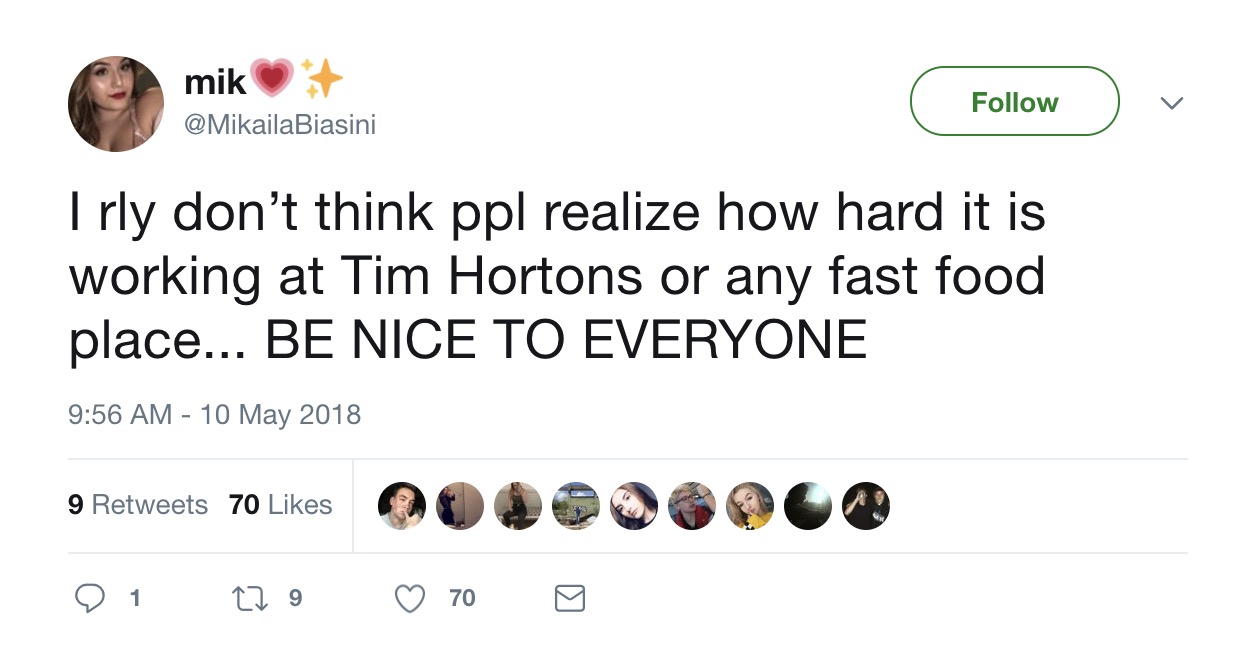 While others were oddly impressed with the woman’s “skills.” 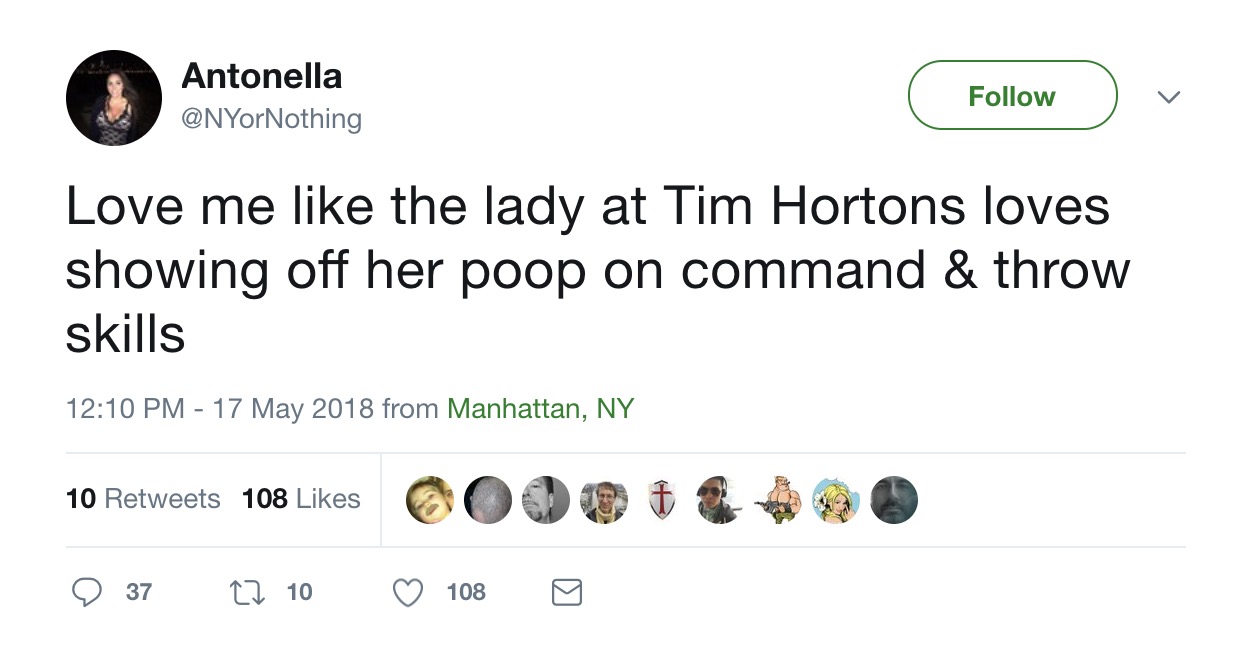 And of course there were jokes: 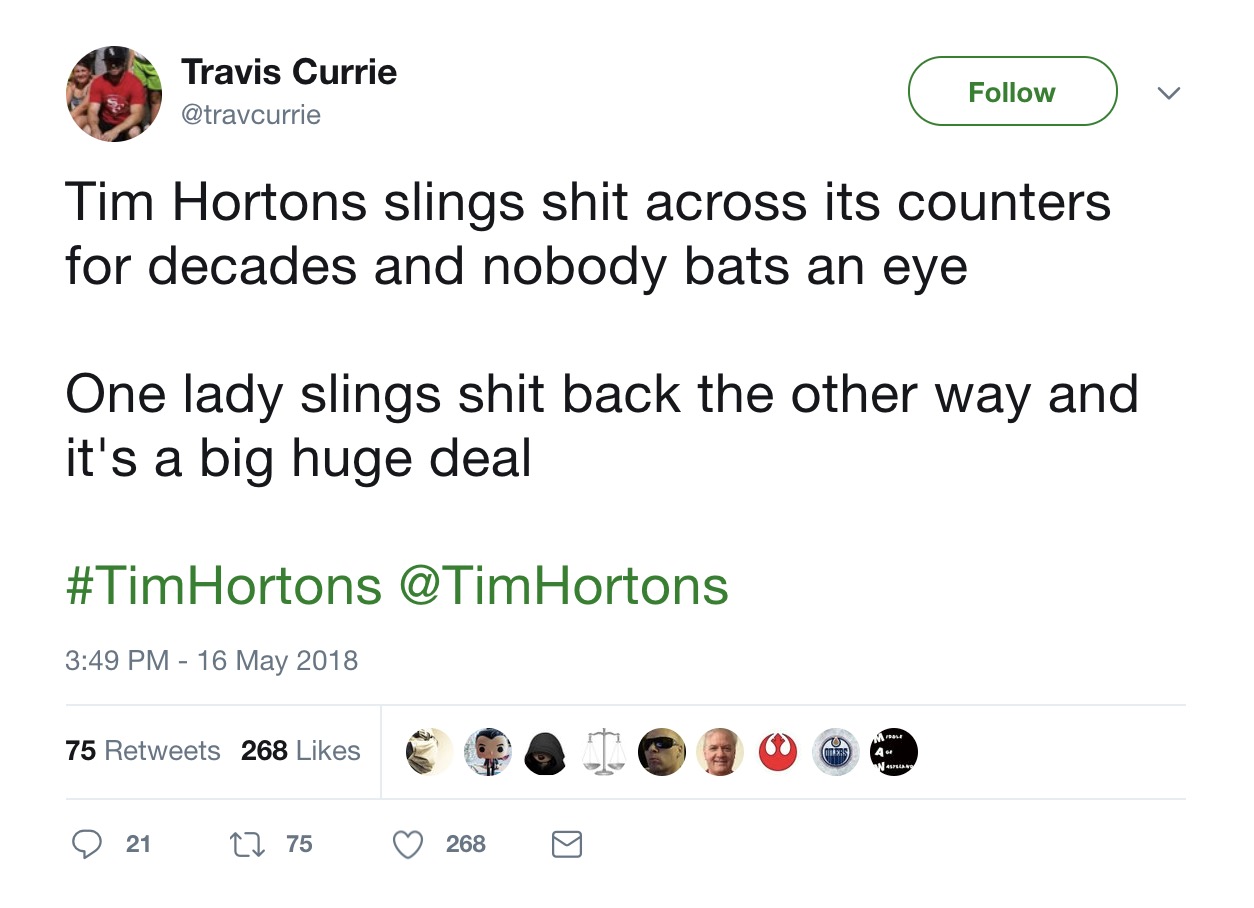 I DISAGREE! Timmy’s is a top caliber donut shop!

One person thought of a great idea for a new Dr. Seuss book. 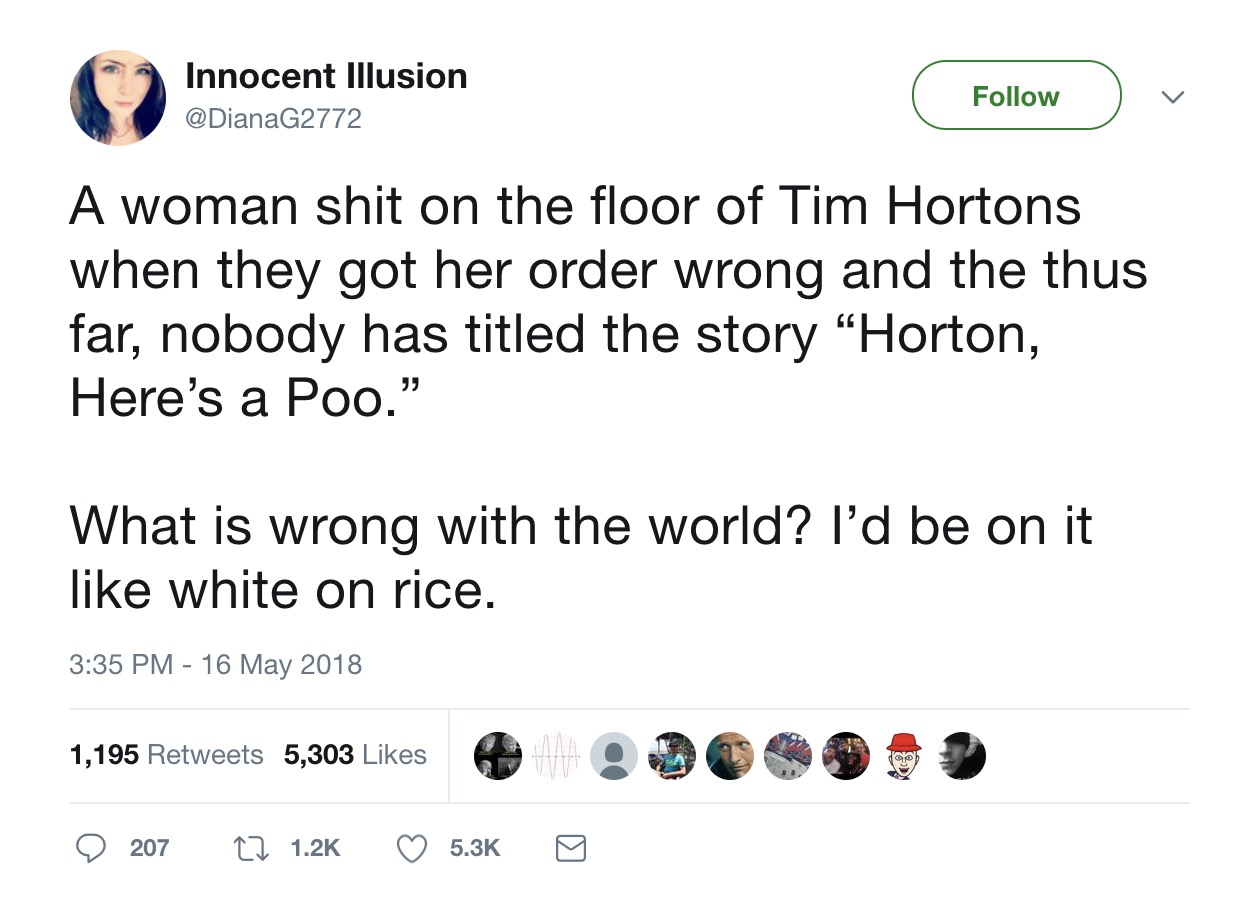 And this guy imagined how he would ruin the evening meal. 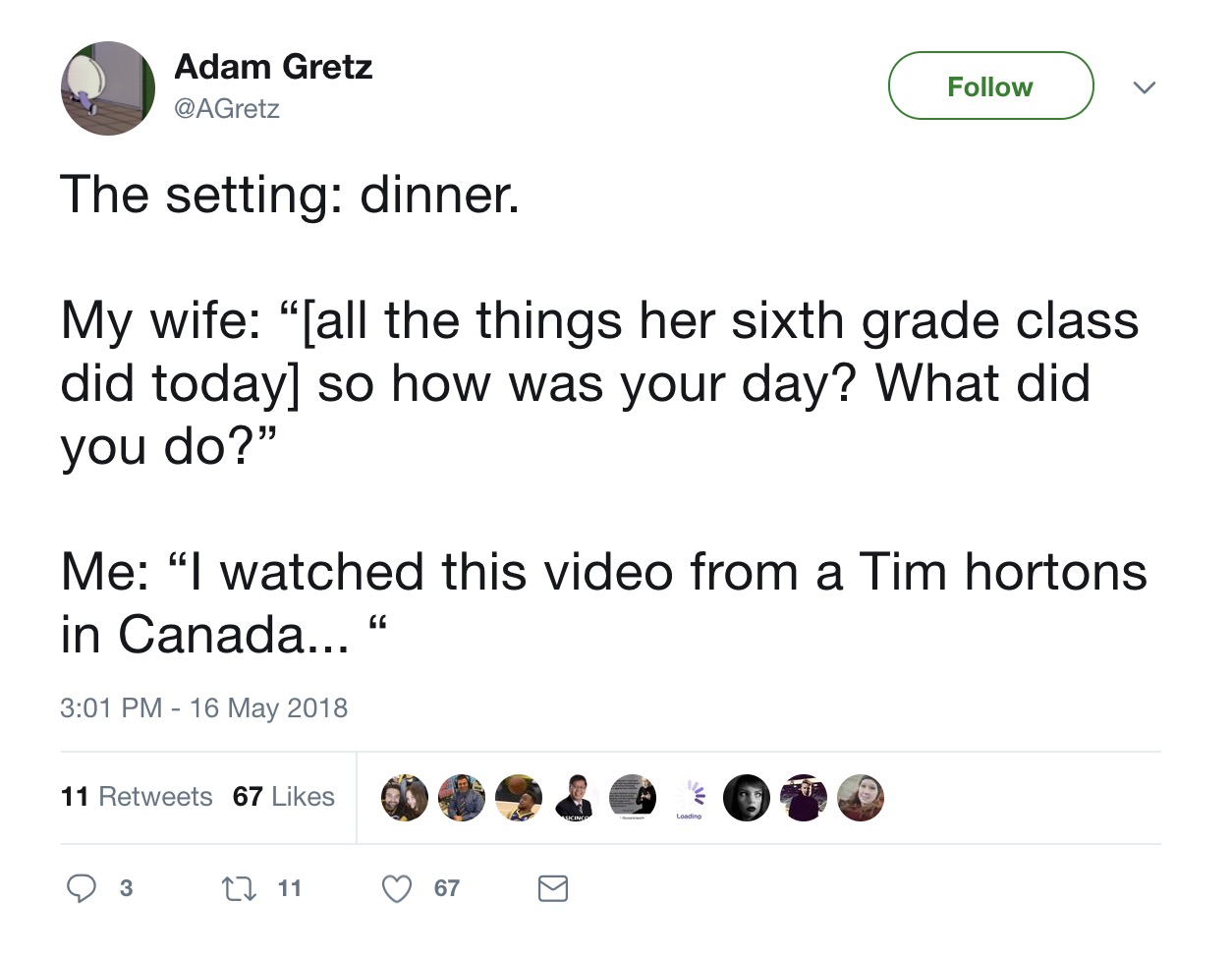 If you ask me, there has to be more to this story. That woman wasn’t working alone. I bet Dunkin’ Donuts was secretly behind the whole thing, as a marketing stunt. The donut wars are vicious.