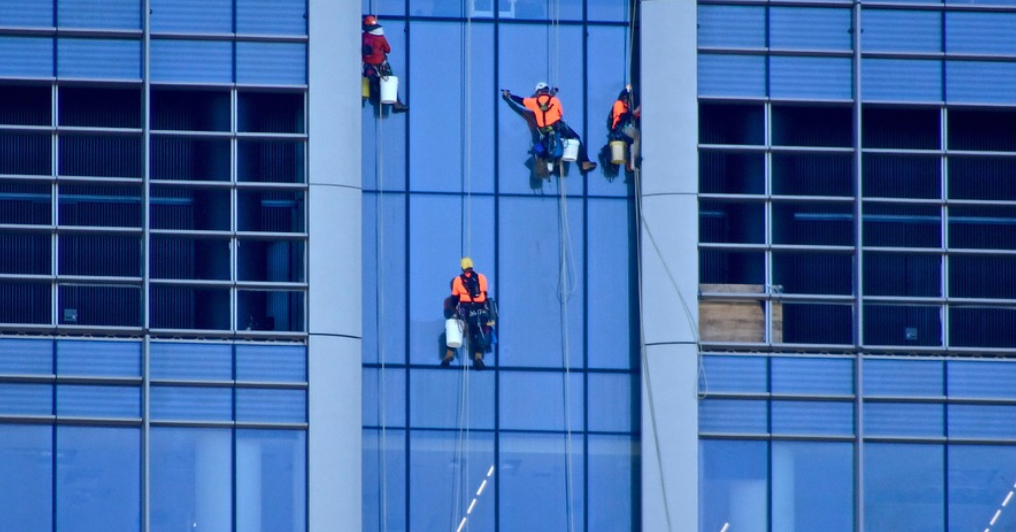 Washing windows on a high-rise has to be one of the weirdest, not to mention most dangerous, jobs a person can perform.

And these stories from AskReddit users that also happen to be professional window washers DO NOT DISAPPOINT. Take a look at these tales.

“The weirdest thing to me is a mansion with round the clock staff inside, they even wear uniforms. It’s just this one rich dude his wife and their two kids. I’m not allowed inside, but I can see the wife. She’s surrounded by the serving staff, but she never talks to any of them, and they don’t talk to her. She seems really sad and lonely.”

“I washed windows once, still not sure if it was on purpose but was washing skylights on a regular house and the daughter walks into the bathroom naked and starts checking herself out. She was the same age as me, like 20 at the time. I didn’t know what to do so I apologized. Her parents heard and made fun of her the rest of the day, I’ve never seen someone turn so red as when her dad said “so you were giving the cleaning boy a show?” They were getting ready to sell the house and I was there for another 8 hours cleaning.”

“I only did the job for about 8 or 9 months but saw two unexpected things.

The other time I got to the top of the ladder and saw a woman in her 80’s sitting on her bed completely naked. I was sure she saw me so I gave her a few minutes before going back to the window. When I get there she’s sitting in exactly the same place, still naked, smiling at me. I got a job in an office soon after.”

“My (maternal) grandfather was a window washer in the 1930s. He saw my (eventual) grandmother on the other side of the glass.”

“I was volunteering for the first time at this small place a while ago because high school, and they gave me a simple job. A bottle of spray and a towel to wipe down the windows.

So I did it obediently, and I was looking through the window. I could see across the road there was a sidewalk and some apartments. On the sidewalk, there’s some trees, not too small or big, just your average tree. I could see this lump dangling on a branch, and I immediately recognized it as a wasp nest because my neighborhood had a lot.

I remember thinking to myself, “Man I feel bad for whoever has to take care of that.” (For some reason I thought people like beekeepers didn’t exist) Lo and behold, a white middle aged woman, kinda chubby, probably in her 50s, is watching from a reasonable distance. She goes back into her apartment, and comes back out with a metal baseball bat. I stopped wiping the windows and watched with horror thinking, “Uh oh.” I started heading towards the door to yell stop, but I wasn’t quick enough.

She runs up to the nest and takes a good hit at it. And I guess she tried to run away from the nest, but sprinting is a bit hard in your 50s, and her weight didn’t help. Yikes. She got stung and she kinda fell on the ground in the process. Wasp stings hurt like hell. I told the store manager what happened and she called an ambulance. She got whisked off, and that’s the end of the story.”

“My boyfriend has done a lot of high rise window washing. As he was doing his thing, a man walked into an office, unzipped his pants, proceeded to pee into a potted plant, and walked back out as soon as he was done doing his business. The man was never aware that he had an audience.”

“I used to wash the windows of a house that turned out to be a brothel.

Should’ve known really the signs were all there. Different men answering the door, all beds were king size with silky sheets Showers in every room Etc…”

“A piglet. As in, a baby pig, not the Winnie the Pooh character.

No idea why he got an office on the 10th floor.”

“The strangest was a woman who watched me to my work from the other side, pointing at all the streaks and spots as if I were missing it all. Her windows were filthy because we’d had a rain storm followed by a dust storm (only in Texas). I knew it’d take more than one pass to get it all, so I started with the big squeegee to get the bulk of the dirt off before going at it again with the smaller one that doesn’t leave streaks.

She was losing her mind tapping during the first pass, tapping on the parts I was going to go over again. She pointed out the wet streaks that dry up almost immediately into nothing but clean window. She pointed at the spots I had to really get at when the squeegee didn’t get them. She pointed at me a lot, and I’m not sure what that was about.

As part of the job, I also remove any spider webs or hornet/wasp’s nests I see. Wasps/Hornets aren’t really a big deal if you get the jump on them. You reach up, grab their mud nest, and just smash it in your hands before they get out to bite you. This lady kept freaking out and making barfing faces whenever I did it. She looked completely disgusted. She didn’t ask me to stop cleaning her windows though, so I don’t know what she expected me to do. Not do what I was contracted to do?

The lady clearly thought I was a neanderthal. She later complained that she had to do all the work, pointing it all out to me. I tried to explain that I could sit in a bus and point out the route, but that doesn’t change the work the bus driver is doing. She complained that I couldn’t be that smart because I was a window washer and window washers are lazy. I explained it was one of two jobs I was working while taking a full course load at the university.”

10. Some real weirdos out there

“I used to be a professional window washer for mostly very high end houses. Worked on a few celebrity homes but I really don’t have any interesting stories from them. Here are the top 3 weird places I remember working.

The first place, wasn’t a single occurrence but a particular client. To picture this guy, imagine a more boring version of Steve Carrol Carell.

This dude had a larger house. Probably somewhere in the neighborhood of 3500 square feet. He had the Rolladen shutters around his entire house. For those who don’t know what they are, imaging metalish window covers that roll down over the whole window. Something you’d see in a zombie apocalypse movie. That in and of itself wasn’t that weird. But I still remember the first time those shutters went up. The guy had zero furniture. None. Nada. Nothing except for a very basic queen sized bed with white sheets in one of the bedrooms. The guy would follow us around from the inside and leer at us the entire time we’d be cleaning the windows.

Then when we’d do the inside, he’d follow us around with a roll of paper towels and dab up any minor droplet that would hit the ground. Keep in mind, we always used drop cloths when we cleaned inside glass. We were used to working in the nicest of nice homes so we were always very careful to not get water on the floor. Wasn’t good enough for this dude. He’d literally stand 2 feet behind you with the roll and just stare.

Next place that I can remember that was weird was this gay couple’s house. They were super friendly and perfectly normal for the most part. The inside of their house however, was unsettling.

All of the walls were painted either blood red or black. Pagan and Satanic looking statues, paintings and decorations everywhere. It was unsettling to say the least. The last was this weird guy with insanely curly hair who had like fifty life sized statues of children on his property. Dude lived alone. My co-worker joked he was an angry old mage who would turn children to stone for walking on his lawn when they weren’t supposed too.”

“Wash windows for a hospital certain operating rooms have windows… the doctors just waved at me as I could see this persons midsection cut open on a table. I almost threw up down the side of the building.”

“So I was on the unfortunate side of the incident. Went to go #2, the window is right behind the toilet.. you can see where this is going. I turned back to see a guy looming over me through thinly veiled curtains. I immediately flushed and farted out of there. I’m sure he will never forget that.”

“Finally a question I can answer. We were cleaning a fairly tall building 12 stories iirc adjacent to an equally tall government office building. This office building had several bedrooms on the top level, which we could see from the roof but certainly not from the ground. From where we were standing this bedroom was about ten meters away. As we’re setting up a naked dude jumps onto his bed with an ipad and starts rubbing one out furiously. Facing us.

Not weird necessarily but certainly unpleasant.”

“On my first job as a window washer I went to this house and started washing windows and saw my ex-girlfriend having sex with her new boyfriend. And then she came outside and started yelling at me that “this is insane” and “window washers don’t come to people’s houses at 3 in the morning” and “I’m pretty sure they carry more than just Great Value Window Cleaner and a roll of paper towels.”

I hate when people can’t be professional and mature when it comes to difficult jobs.”

“Just a regular window cleaner here. I was once going up my ladders to clean a bedroom window on the second floor at around 8am. As i got to the top of the ladder i was confronted with a couple going for it at an angle which indicated that he was, shall we say, taking the road less travelled.

Fair enough, lots of window cleaners see people naked or doing it, but this dude, for some reason, at 8am, was wearing a pair of socks and dress shoes. Apart from that they were both butt naked.

Now i can only assume that they were too deeply engrossed to have heard the clatter of my ladders against the window sill, but i got done with that window real quick and just about slid down the ladder.”