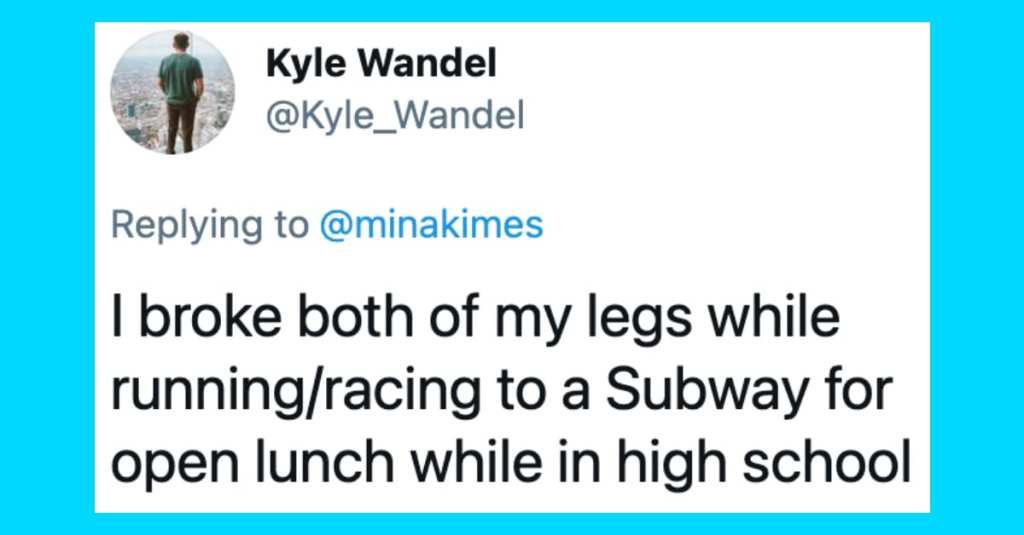 What’s the Dumbest Way You’ve Injured Yourself? Here’s What People Had To Say.

I think my dumbest injury of all time was when a friend and I were pulling cornstalks out of the ground for some reason and my hands slid as I pulled up on one and it cut the absolute sh*t out of my hands and I started pouring blood from both hands.

I immediately rode my bike home and burst through the front door to hysterically tell my mom what had happened. I was also pretty young so I was convinced that I was dying.

It turned out I didn’t even need stitches, but man that hurt…

Let’s check out some other stories about how people injured themselves in dumb ways.

I'll go first: I popped my jaw last week by brushing my teeth too vigorously. It still hurts ?

I took an adult hip hop dance class when I was 28. At the end of the class everyone had to solo free style. In normal, do too much Nicole fashion, I dropped into the splits to show every “I still had it.” Hadnt done the splits since I was a CHILD. Tore my hamstring.

Lucky they were there…

Nearly blew out my knee dancing into a wedding reception. Athletic trainers & a surgeon gave me the all-clear, on the scene. pic.twitter.com/GENJsLLxJz

I chipped a tooth licking guacamole off my granite pestle. https://t.co/3myesuW4eD

Had to explain that one to your teammates…

I sprained my ankle by tripping on my vacuum cleaner…3 days before junior playoffs https://t.co/u3RWSNal2u

Fell asleep on my arm. Woke up in the dark & couldn’t feel it at all. I was trying hard to move it & just as I was about to give up, my hand fell from the sky & whacked me in the face!

You don’t know fear until you think you are being attacked w/only 1 arm to defend yourself.

7. Gotta be careful with those things.

I injured myself by stepping on a Lego in kids bedroom while putting clothes away, lost my balance, grabbed the clothes drawer pulled it out as I fell over backwards and it all fell on top of me. All true. Can’t make it up

The truth comes out…

the mac n cheese incident ???
spilt hot mac n cheese on my LEG and got a second degree burn ?? https://t.co/FLAEjnFAZz

I can’t believe it!

I broke both of my legs while running/racing to a Subway for open lunch while in high school pic.twitter.com/d5OlxxADEj

Sorry about the arm, though.

I broke my arm by falling off a chair in an attempt to reach a LEGO Draco Malfoy https://t.co/7IRPll4vzx

Have you ever hurt yourself in a really dumb way?

We can’t wait to hear about it!