Let’s face it – even though we’ve come a long way as far as women’s rights, living in a country without guaranteed paid maternity leave still makes working and having a baby a challenge for many women. That said, this letter shared by the daughter of the woman who received it back in the 1960s proves that we do have a thing or two to be thankful for these days.

The mother had been employed by the board of education, who refused her request for a leave of absence after the birth of her baby.

Instead, she simply lost her job.

We regret to inform you that we must consider your request for a Leave of Absence as a termination as of December 31st, 1969.

This is necessary since our Board does not yet approve maternity leaves. When you are ready to return, you should notify our office of your availability for another teaching position.

May we at this time thank you for your services as a member of our staff.”

As far as the woman who tweeted what she had found in her mother’s basement, she had some thoughts on why her mother might have kept it – and about everything she went through to have a family and a career. 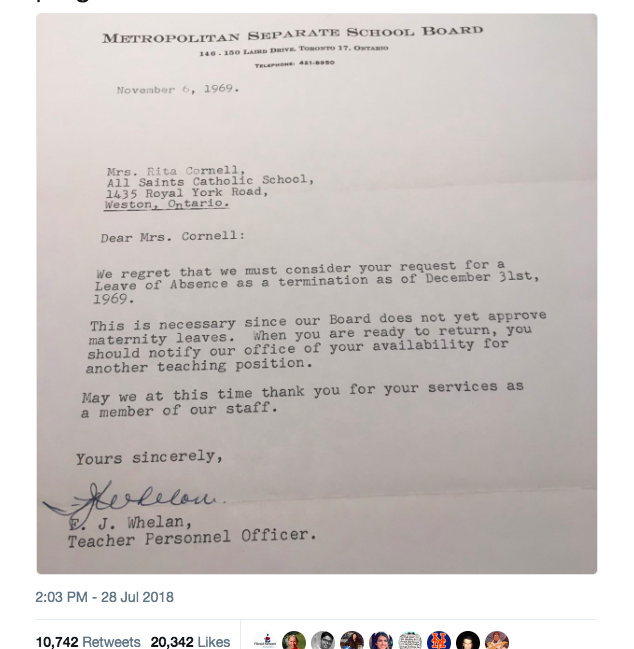 Paid maternity leave was passed in Canada, where Ms. Cornell lived, in 1971.

Even though the Equal Employment Opportunity Commission (in the States) drafted discrimination guidelines regarding pregnancy in 1972 and the Pregnancy Discrimination Act in 1978, neither promised any time off to recover from pregnancy and childbirth (never mind providing time to bond with the child afterward).

It wasn’t until 1993 (can you believe it?) that the States passed the FMLA act which, it must be pointed out, offers no official paid maternity leave, only a way for employees to save and use their own leave to cover time off for qualifying life events.

As with our other rights, like voting, we can thank our fearless foremothers for going to work despite dealing with this crap when they decided they’d like to have a family, and for persevering so that we can have things (marginally) better.

We still have a long way to go, sisters, so keep fighting!