This Nightstand Can Turn Into A Weapon To Fight Intruders

It’s important to feel safe in our homes, and several home security products exist to do just that. Safety fits into any budget, whether it’s a deluxe panic room with bulletproof doors, ($22,000), or just a brick kept by the side of your bed.(Free, if you know where to look.)

The problem is, safety products are made to keep you safe; they’re not meant to fit seamlessly into your home decor scheme. Your guests wouldn’t feel comfortable in your contemporary living room full of Pottery Barn furniture if they also had to stare at a Mantrap Security Door.

But finally, there’s a product that manages to be both stylish and useful for bludgeoning intruders: it’s the Woodquail Self Defense Night Stand.

“What, just a night stand?” you’re thinking. “How does that keep you safe?” Because it’s not just a nightstand: it also disassembles into a bat…AND A SHIELD! 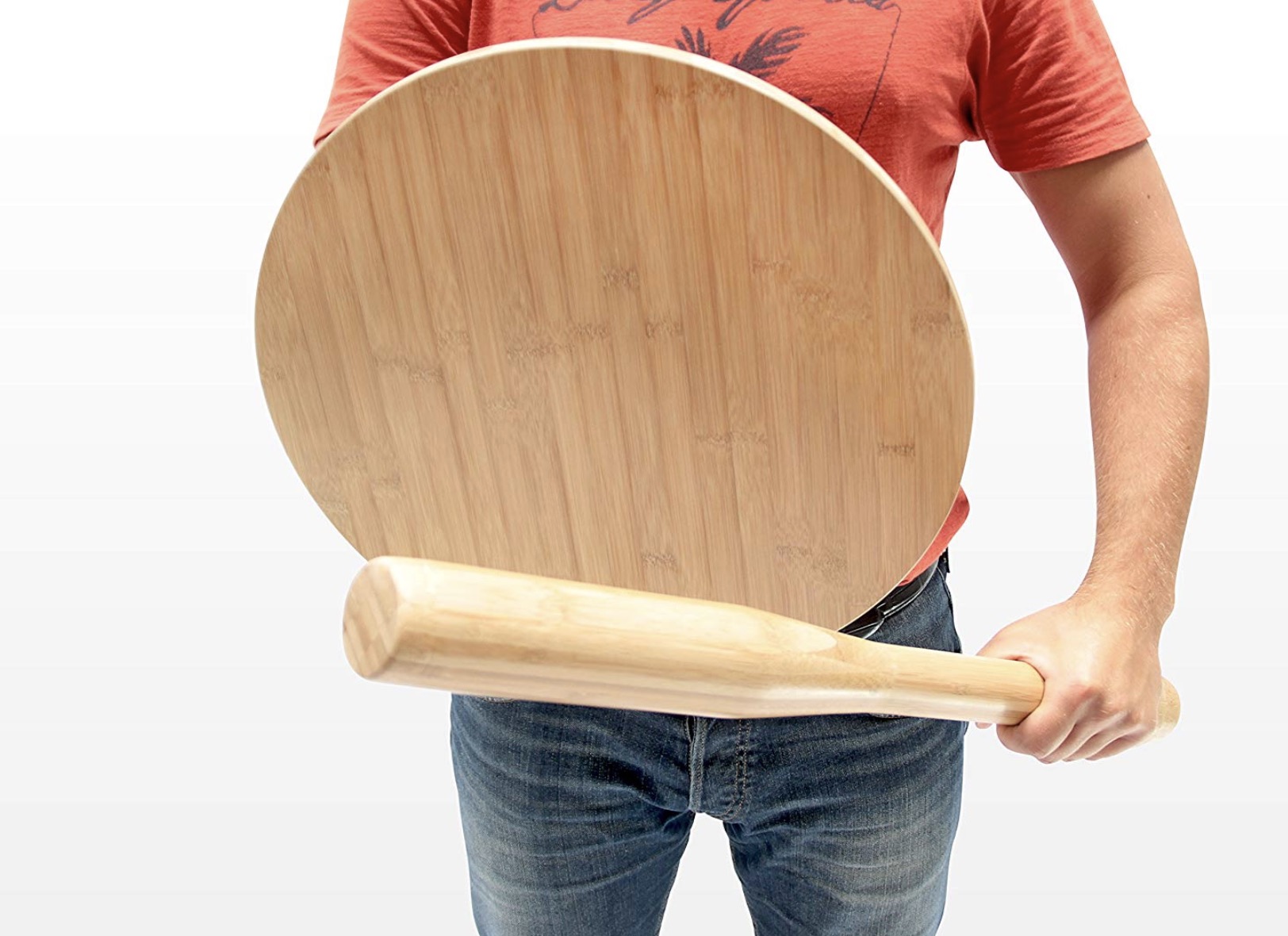 Let’s say you’re nestled in bed at night with your phone. Perhaps you’re reading this very article, or another of our excellent offerings on Awkward.com, and you’re going to leave a comment on Facebook telling us what a good job we did. But then, you hear a noise! Someone has broken into your home!

If you have a Self Defense Night Stand, all you have to do is sweep away the alarm clock or glass of water or whatever you’ve got, detach the table from the base, and voila: that intruder is now face-to-face with a bat and shield-wielding warrior. 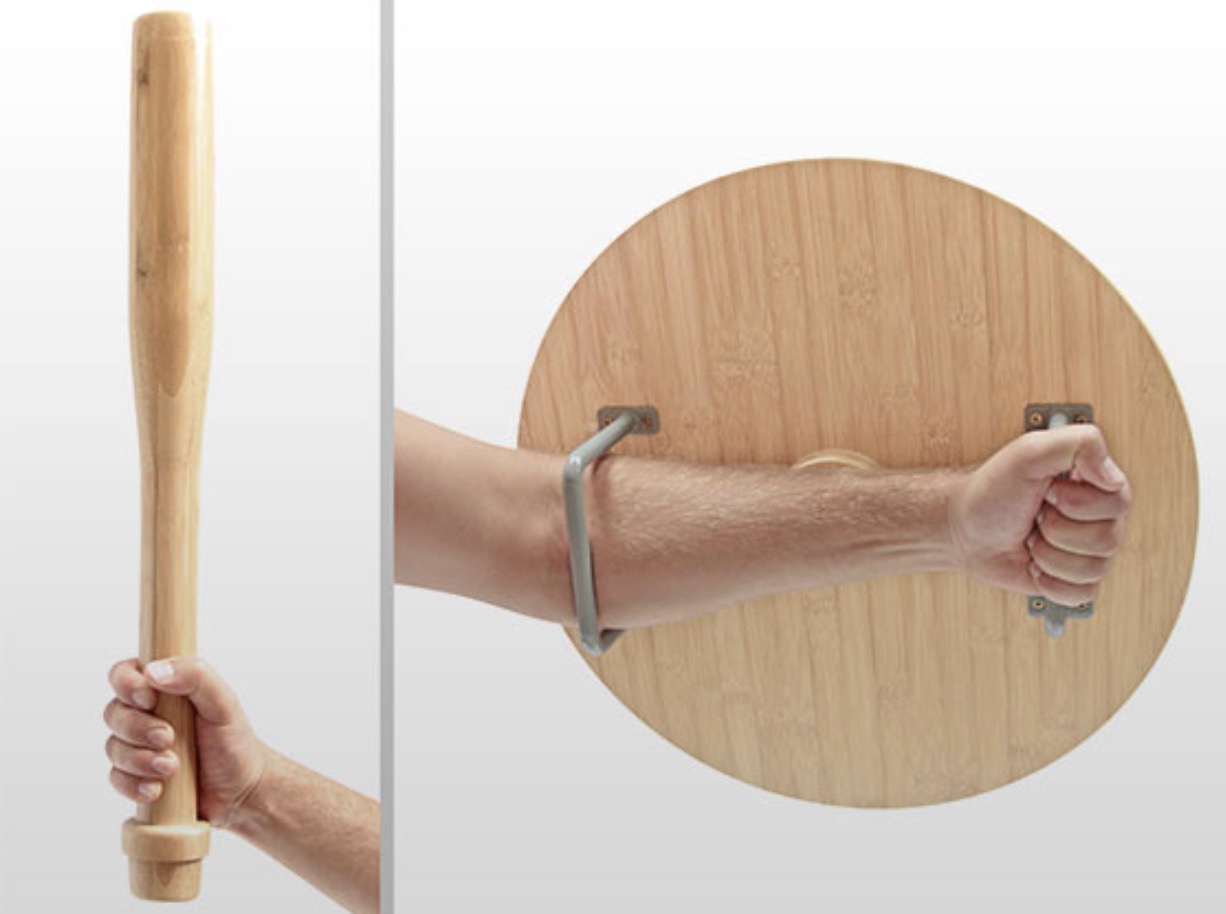 The nightstand is for sale on Amazon, but sadly is currently out of stock. The nightstand is made from bamboo, which admittedly isn’t the strongest material for weaponry. But as the product description suggests, it’s at least good enough to warn an intruder that you’re armed. The wood is varnished, which makes it waterproof and easy to clean–even washing off blood should be cinch! Finally, the shield is held with two metal “staples” on the underside of the table, which can also be used for uncluttered cable storage. 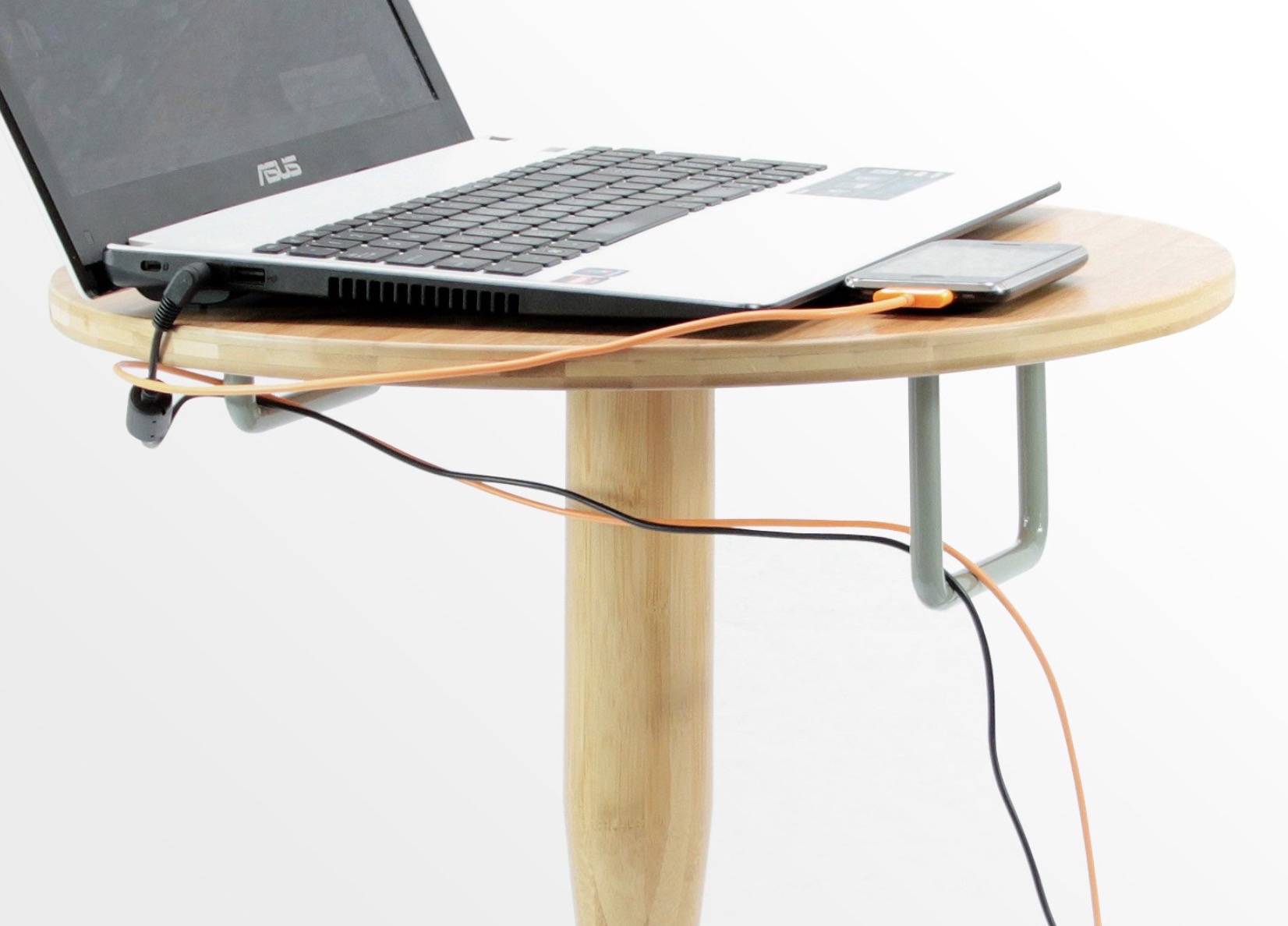 The only part of the night stand that’s not a weapon is the base, which is a missed opportunity. Couldn’t they stick some spikes on the sides of it? Then you’ve got a handy Death Frisbee to chuck at an intruder. Come on, people, think! 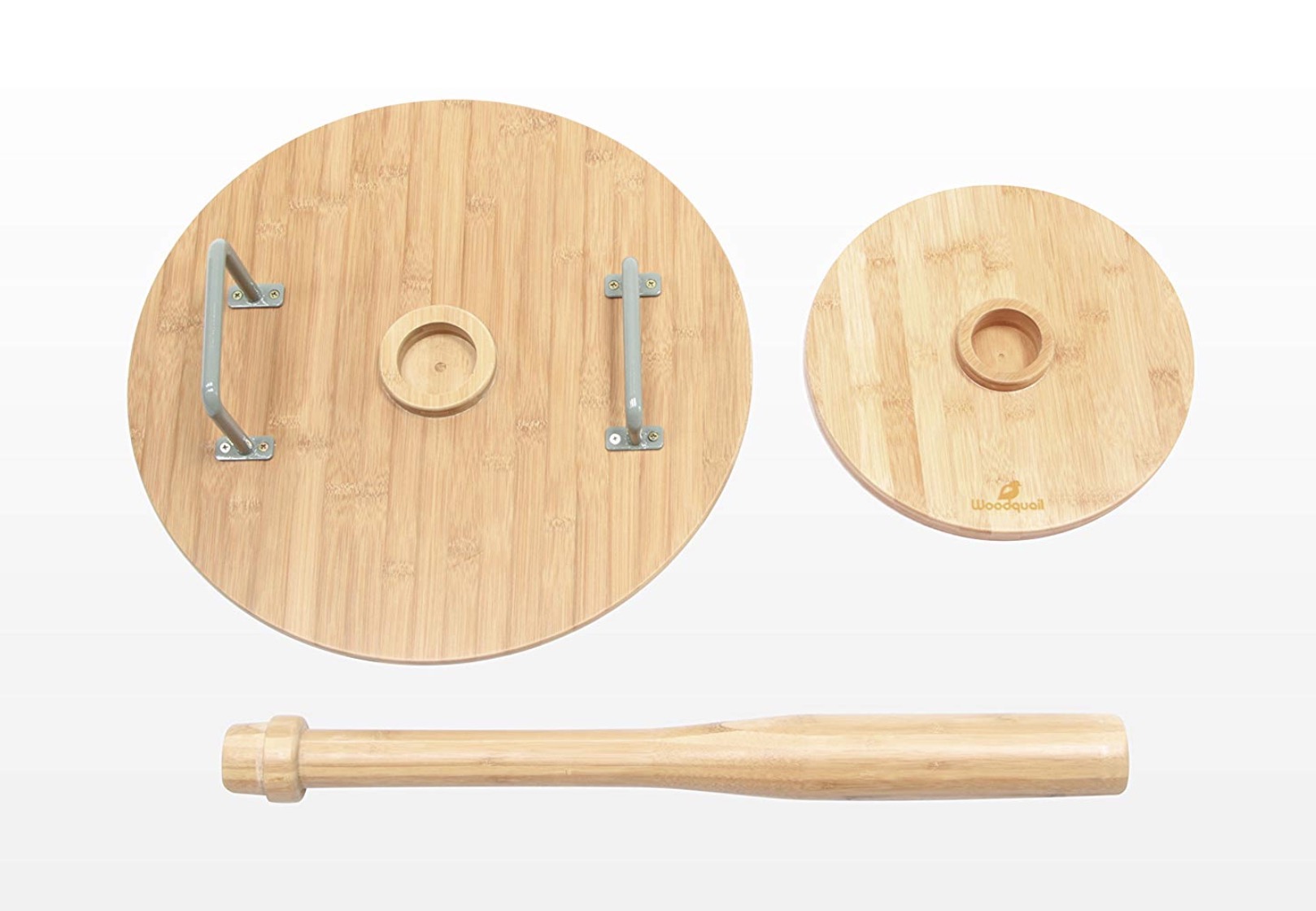 Now, the most common objection all of us probably have is, why is this necessary? Wouldn’t it be easier and cheaper to buy a regular nightstand and keep a baseball bat next to it? Yes, but then you wouldn’t have a kickass shield that makes you feel like a Roman legionnaire.

Of course, since we all live in the 21st century, most of us probably aren’t adept at shield-based combat. And to the best of my knowledge, most self-defense places don’t teach it. So, if you want to make the most of your Self Defense Night Stand, you’ll have to get creative. Maybe ask people at a Renaissance Fair? 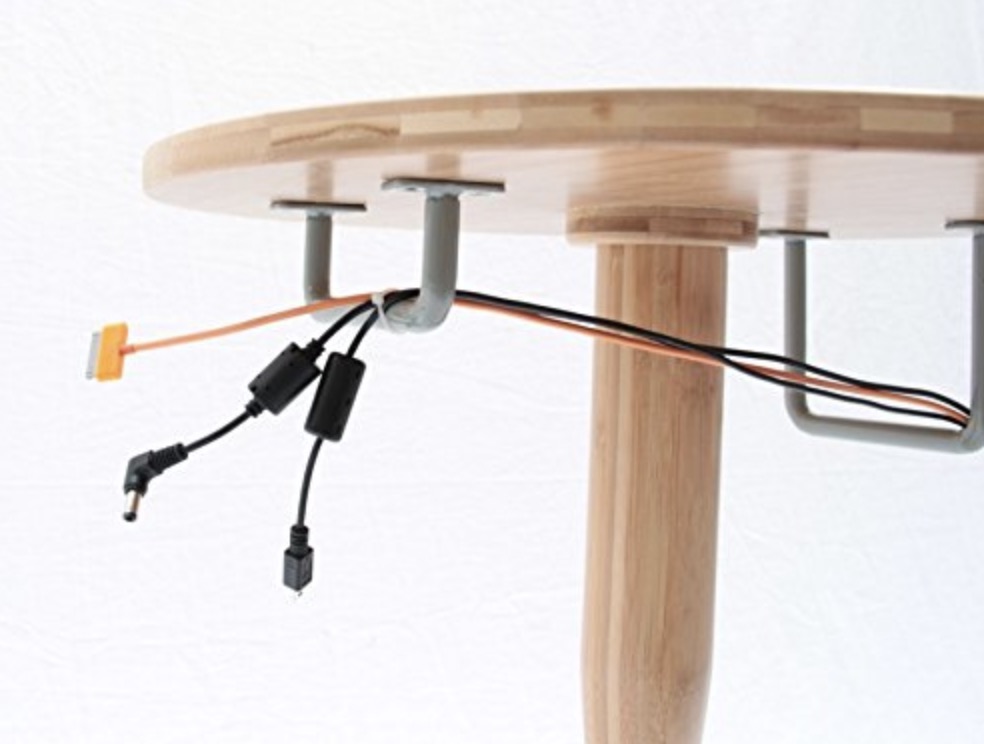 So far, only one customer has reviewed the Self Defense Night Stand. Amazon user M.J. gave the night stand four out of five stars, and while he did appreciate some of its features, his overall reaction was “Could be better.” The pros? It’s suitable for righties and lefties, and it’s great for attacking people’s junk:

“The torso sized shield is ideal, allow for the protection of vitals and/or genitals in the event of an assault, picture clearly shows a left handed user, but is equally usable for righties. The leg/bat appears to be shorter than a baseball bat but longer than a rounders one. Depending on a user’s size and ability this combination can make a formidable defensive or offensive tool.”

However, Mr. Tucker also had suggestions for improvements. His main problem? Not deadly enough.

“The cons however must of course be obvious, although bamboo is tough and light, the slated construction would have me wishing for it to be leather covered for additional strength without compromising the weight or for the stronger user a one piece thick board construction. The bat is over long for indoor use, ceiling height and hall dimensions would prevent fullest g force, might give an opportunist burglar second thoughts but not a determined assailant. To that end I would suggest replacing the bat with something sharp and serious looking a serrated edged hunting knife clipable to the shield for storage. Close quarters survival fighting you need every advantage, if knives scare you then I suggest some nice long nails 6inch plus near the top, the would be hidden when used as a table, but when brandished at an opponent, running away would seem like a sweeter deal.” 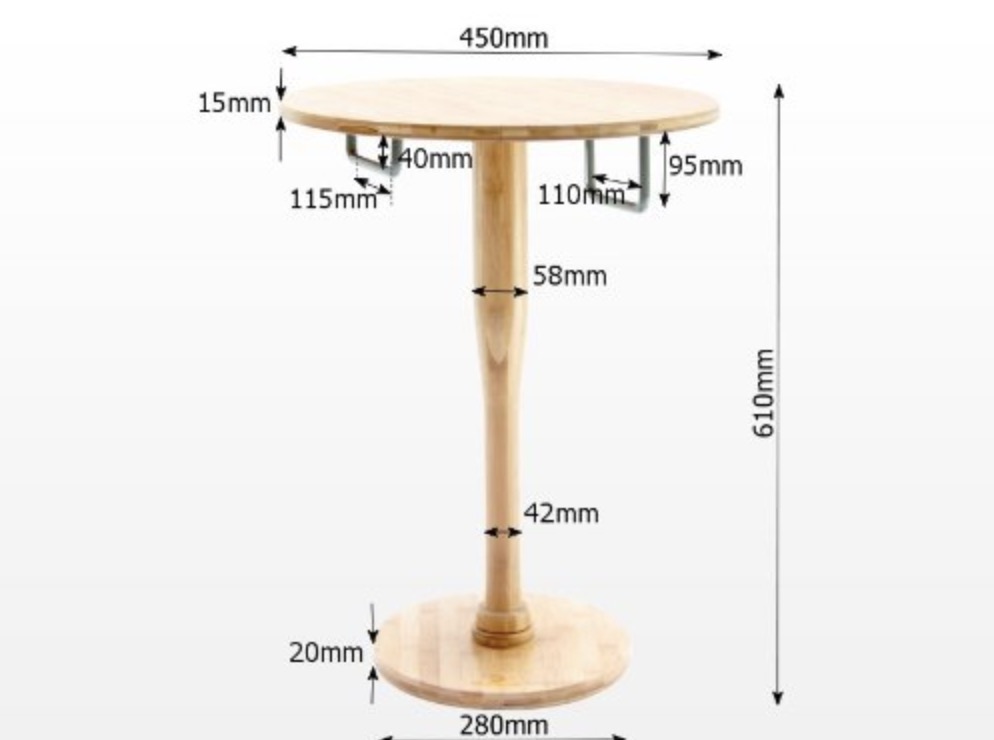 If Woodquail’s Self Defense Night Stand becomes popular enough, it’s only a matter of time until companies roll out more home goods that double as deadly weapons. Here are some products we might be seeing soon:

-An Amazon Echo, but with a really snarky version of Alexa that insults a burglar’s clothing and life choices. This will reduce them to tears and allow you to disarm them

-a Roomba with a flamethrower taped to it

Who wants to invest?