This Guy Is Suing His Parents For Throwing Out His $29,000…Ahem…Video Collection

You’ve probably heard stories about people who left their childhood treasures at their parents’ house, hoping to one day revisit their beloved baseball cards or Barbies, or maybe sell them to a collector.  You know what happens next: inevitably, they discover that Mom and Dad threw them away years ago. This story is kind of like that, except more X-rated, and a lot more weird.

This week, “Charlie”–not his real name–filed a civil suit against his own parents in the Southern Division of the U.S. District Court for the Western District of Michigan. The reason? They threw out his vast collection of adult movies and magazines, which he valued at about $29,000.

Unfortunately, no photo of the entire collection seems to exist, so we’ll have to use our imaginations. But it was apparently enough to fill 14 boxes. 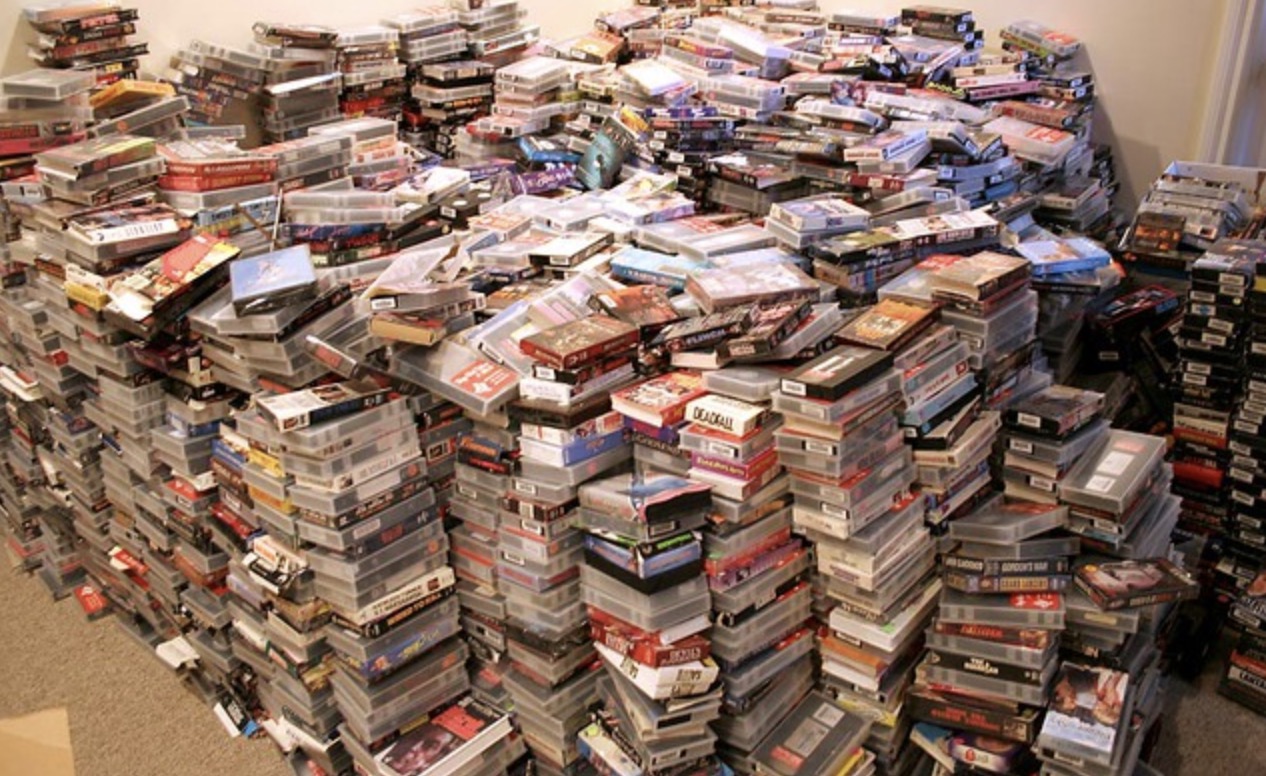 The dispute started back in 2016 when Charlie, 40, moved in with his parents in Michigan after his divorce, and brought his adult movies with him. Charlie didn’t pay rent, but says he did contribute to the household chores. The relationship with his parents eventually became strained. In October of 2017 the police came to Charlie’s parents house to respond to a “domestic situation.” As a result, Charlie’s parents asked him to move out.

By November 2017, Charlie had moved to Muncy, Indiana, and his parents brought him his possessions. To Charlie’s dismay, the erotica was gone. As Charlie’s father later wrote in an email to his son, “We counted twelve moving boxes full of pornography plus two boxes of ‘sex toys’ as you call them. We began that day the process of destroying them and it took quite a while to do so.” 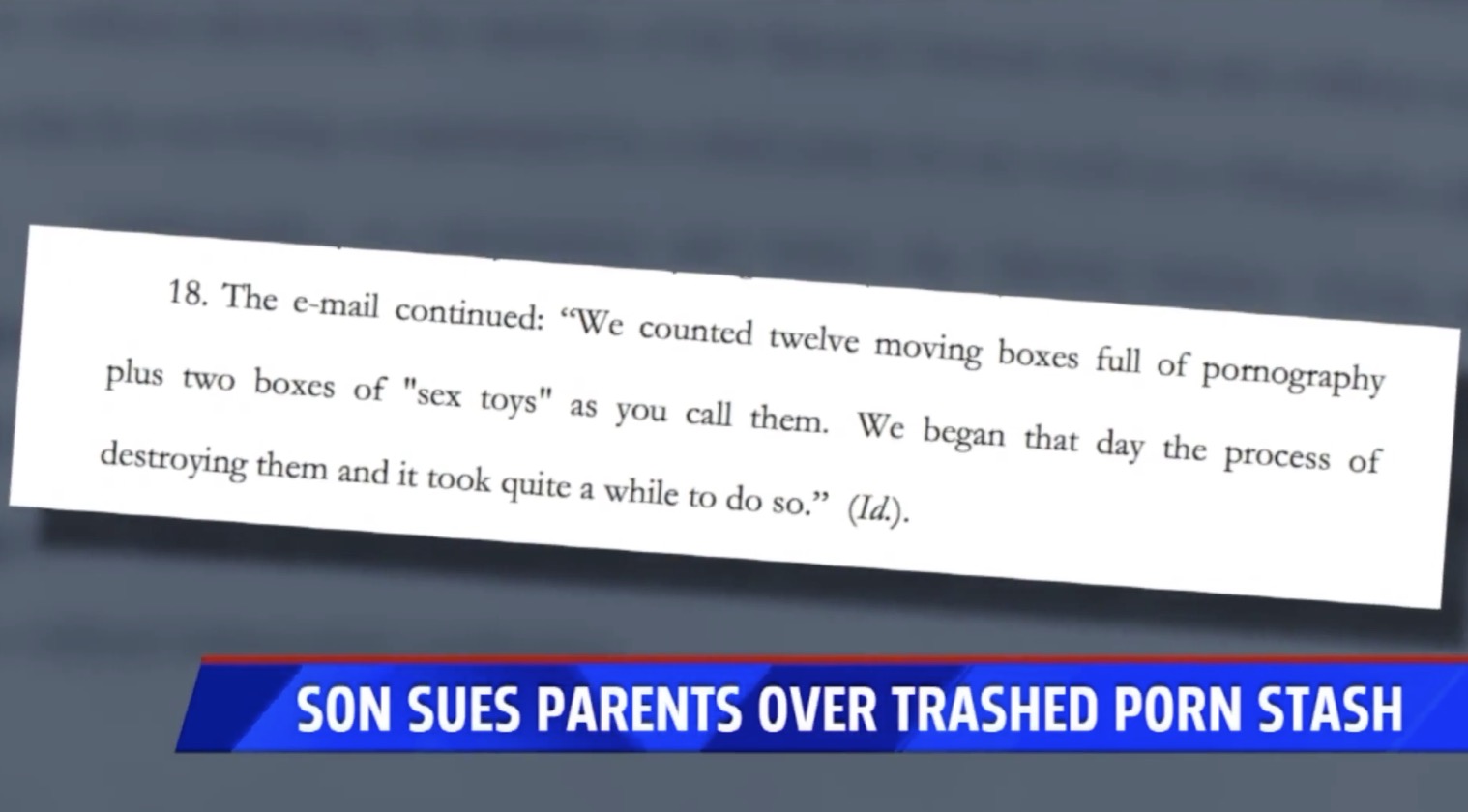 At this point you probably have a lot of questions, and I’ll do my best to answer them.

Next, does Charlie know you can get all the adult content you want on the Internet for free? Apparently not!

Finally, how did Charlie manage to get married in the first place? I dunno, man. It’s a mystery to me too. 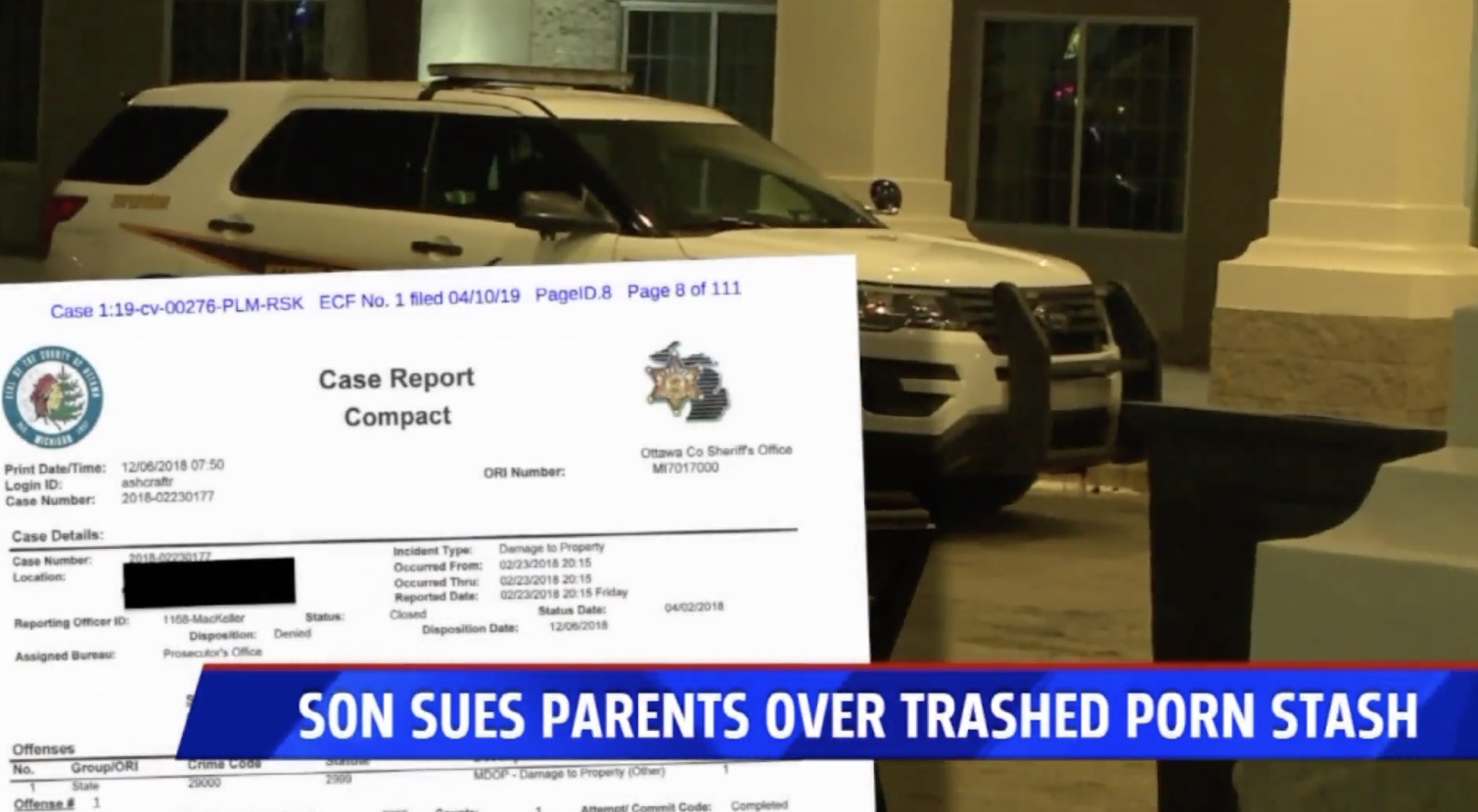 When Charlie learned what his parents had done, he first reported the incident to the Ottawa County Sheriff’s Department. Despite repeated attempts to get his parents charged–Charlie sent one detective 44 separate emails listing the titles in his collection–police declined to prosecute, citing a lack of evidence.

Charlie then turned to civil court. This month, he filed a lawsuit against his parents demanding  $86,822.16–about triple the value of his collection. 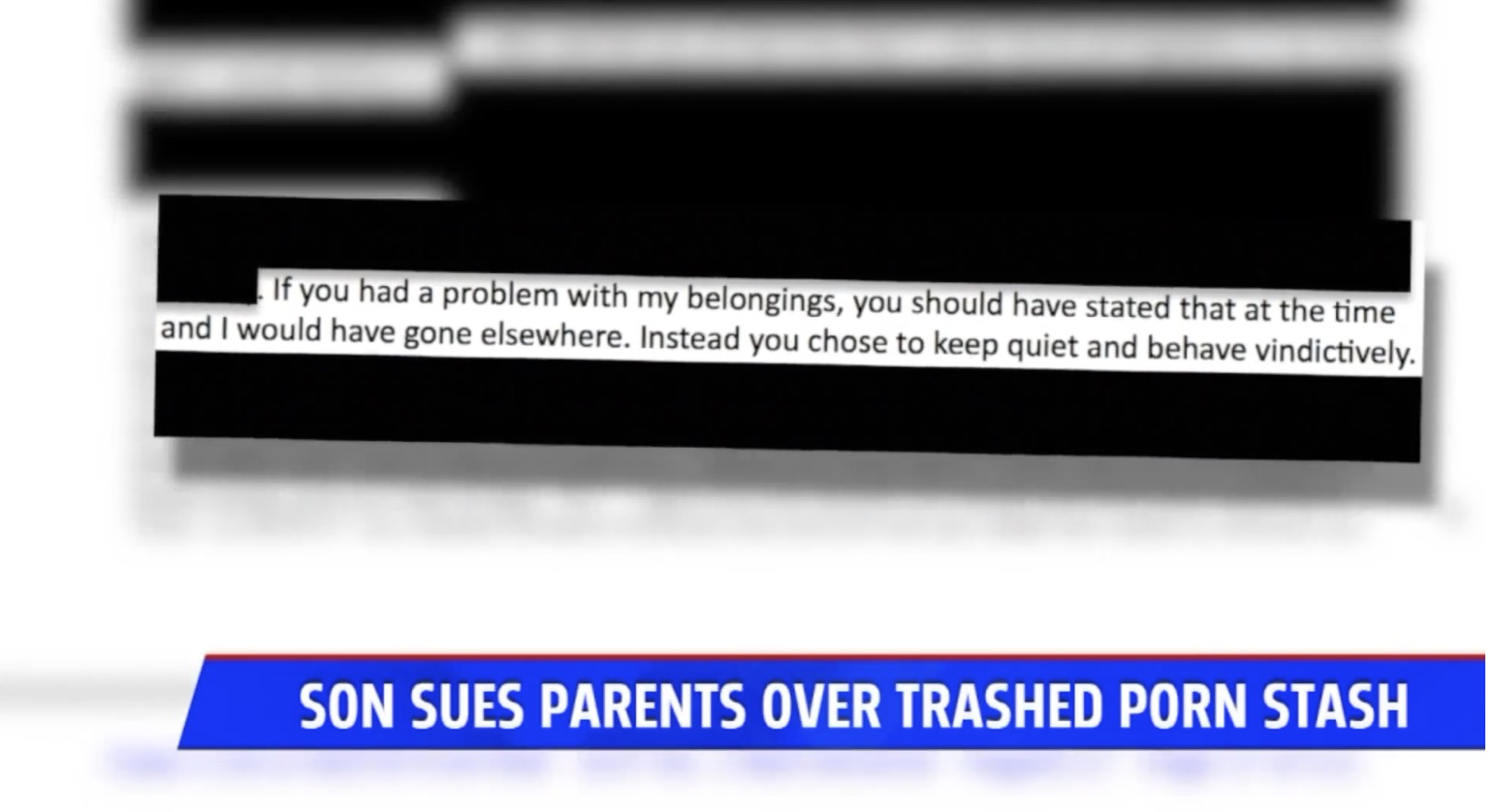 Charlie’s lawsuit includes several emails between him and his parents. In one, Charlie’s father explained why they threw out the collection, comparing it to a drug addiction: “I would have done the same if I had found a kilo of crack cocaine. Someday, I hope you will understand.”

Charlie claims he had no idea his parents felt this way. “If you had a problem with my belongings, you should have stated that at the time and I would have gone elsewhere,” Charlie wrote. “Instead you choose to keep quiet and behave vindictively.”

But Charlie’s father isn’t buying it. In another email, he mentioned that Charlie had previously been kicked out of both high school and college for selling pornography to other students. “I also warned you at that time if I ever found pornography in my house again, I would destroy it,” he wrote. 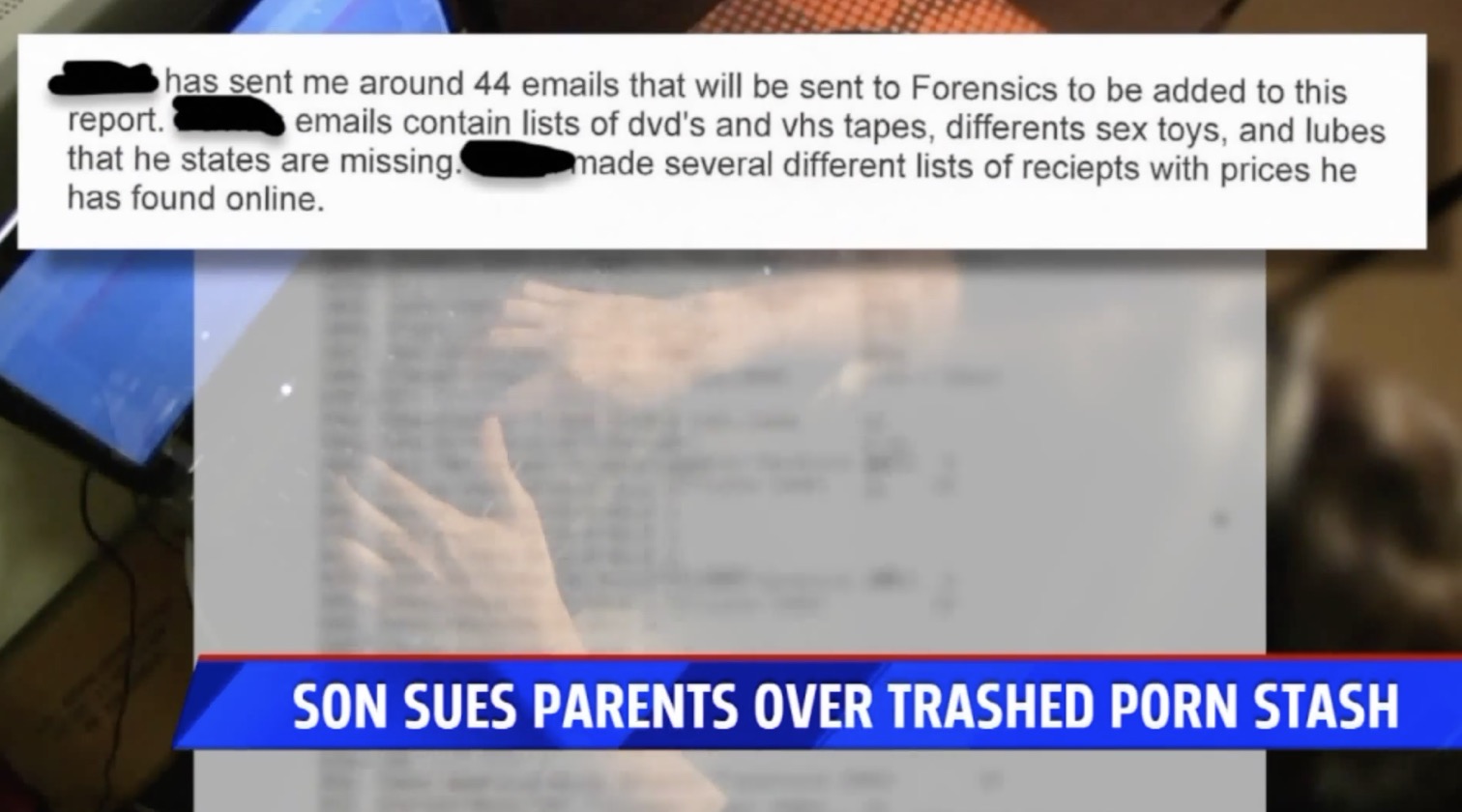 Folks, if you were looking for a hero in this story, I think you just found one.

15 Memes That Might Make You LOL
15 Random Photos That Will Put a Smile on Your Face
Meet The Guy Who Was Raised By Wolves, And Wants To Return To Them
15 Of The Most Ridiculous Things People Have Said In Courtrooms
Random, Funny Memes That Are a Total Hoot
School Catches Ghost On Security Camera… And Yes, It’s Kind Of Freaky