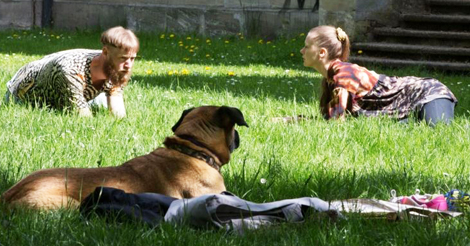 These Artists Do Special Theatrical Performances Just For Pets

Does your pet seem “off” these days? Does your furry best friend fail to take pleasure in activities he would normally love, like walking or eating or snuggling?

Well performance artists Alex Bailey and Krõõt Juurak might just have the cure: they’ll perform a show just for your pets, right in your home. (If you live in Austria.)

No, this isn’t a Portlandia sketch. It’s real. 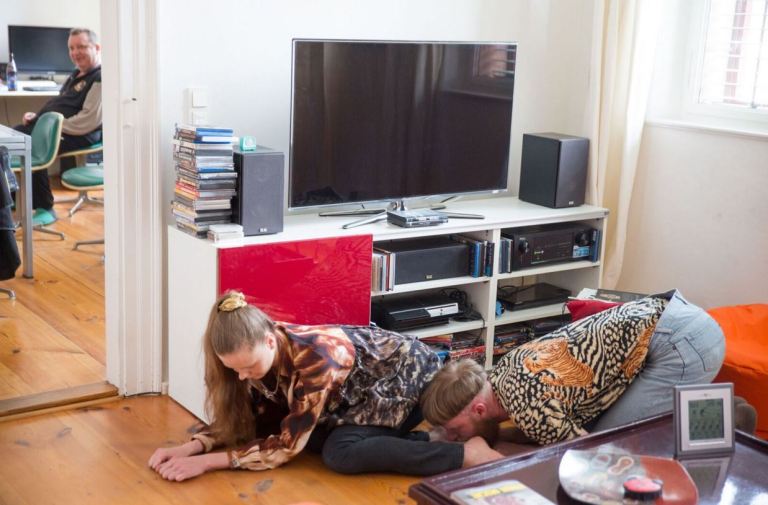 Krõõt Juurak (L) and Alex Bailey (R) mid-show. And in the background is the most open-minded pet owner ever.

What sort of show do Alex and Krõõt perform? Basically they get get on the floor and act like the pets. But according to them, it’s much, much more complicated than that. (Of course it is.) Per their website, the performance includes “Body and mind techniques imitating various forms of non-human voice and body languages, empathizing with possible meaning or connection with our audience.”

The performances last 20-30 minutes, or until the pet decides they’re more interested in licking themselves. Whichever comes first. 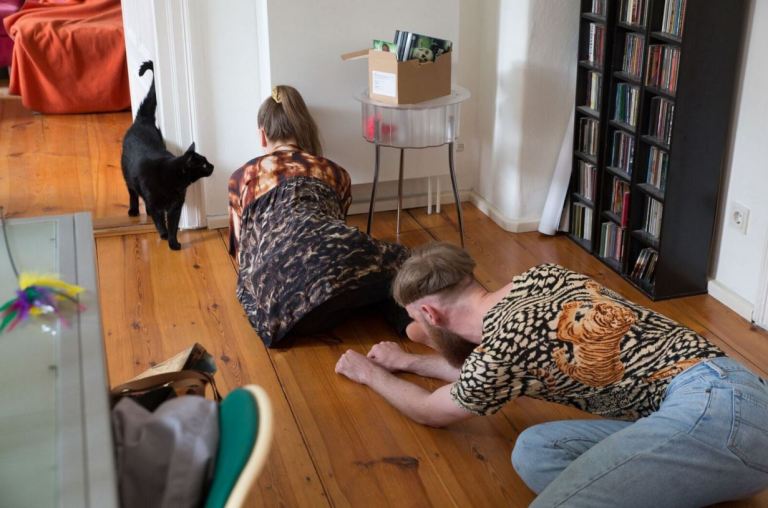 Here, they compete with a speck of dust for this cat’s attention.

And they don’t just do the same show for every client. Each performance is unique and tailored to the individual pet’s personality. As they explained in an interview with Metro in the UK, Alex and Krõõt first meet the pet and their owner in their home. There, they quiz the owner about “the pet’s quirks, his or her likes and dislikes, and their performance preferences, and then adapt the performance to the pet and the location.” 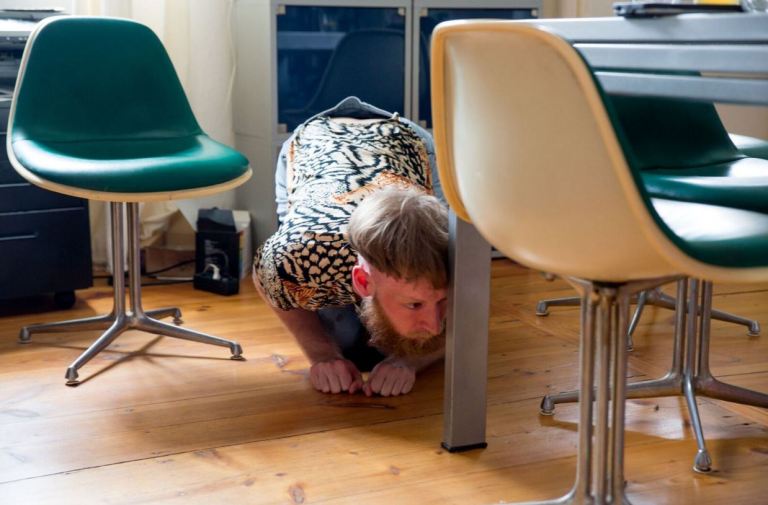 Now, we’re sure you have a lot of questions. Like, “How do pets react when Alex and Krõõt arrive?” Or, “Can animals even understand concepts like ‘theater’?” 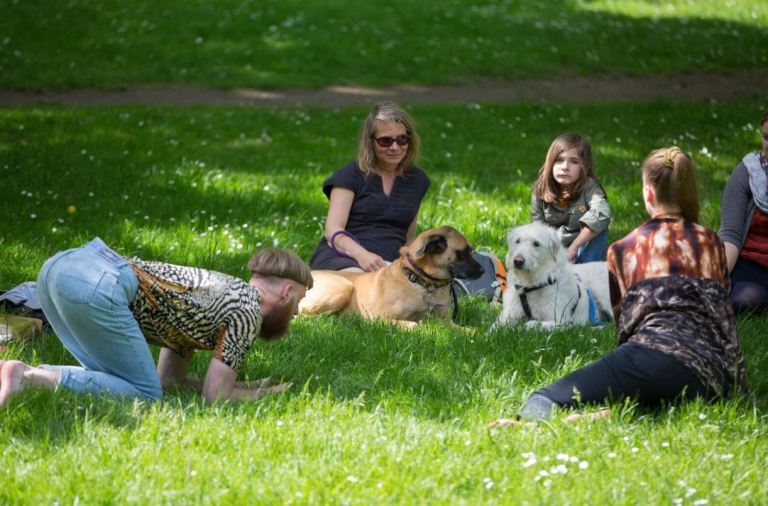 Another question you might have: “Did Alex and Krõõt’s high schools have a career counselor?”

Alex and Krõõt have answers. The dogs tend to react like…well, dogs. Again from their website: “The reactions vary a lot, from dogs focussing intently on ripping their toy apart and pretending we are not even there to enthusiastic play involving biting, licking, humping and barking.” 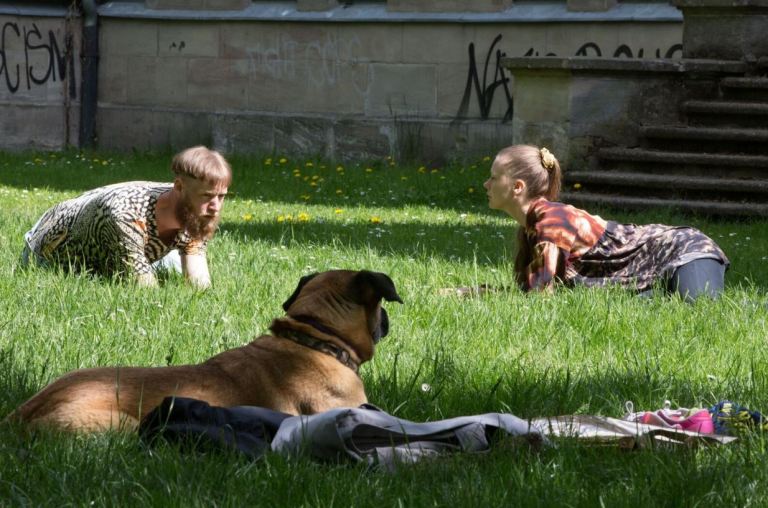 Krõõt is from Estonia. Alex is from the UK, and has the greatest bowl cut since Moe Howard of The Three Stooges.

Cats, on the other hand, react the way cats react to everything. “A typical cat always leaves the room as soon as the performance starts, and comes back after a few moments to follow us around the house, in some cases even to the door after the performances already finished.” 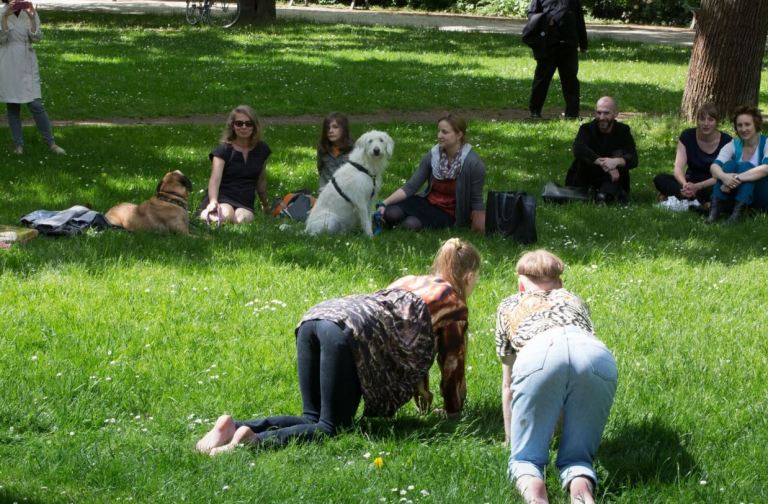 Pictured: a bunch of dogs who aren’t allowed to play in this park because they have to watch performance art.

Other pets like to get up close and personal with the performers. “We have over the past years become quite used to being sniffed or licked during the performances,” Alex and Krõõt told Metro. 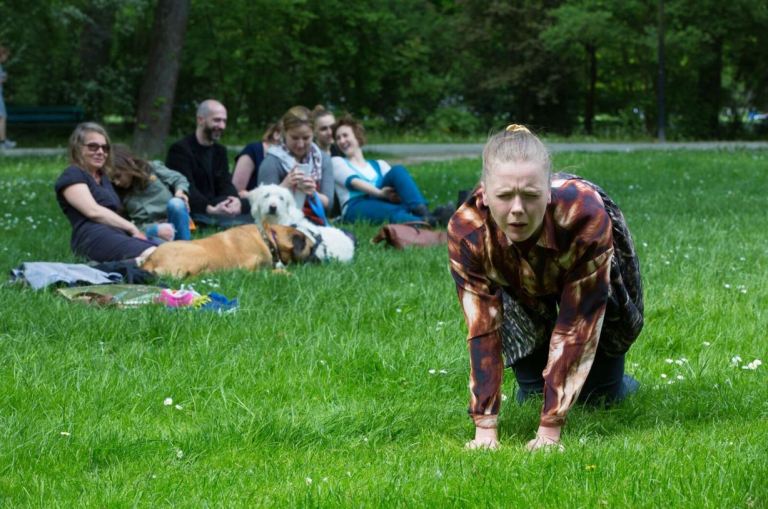 Pictured: Krõõt Juurak, who some view as the Meryl Streep of pretending to be a dog.

One time, things even got hot and heavy. While putting on a show for a brown poodle called Von Carli, Alex and Krõõt both got humped. But according to their research into dog behavior, the act wasn’t sexual, but rather a mixture of confusion and excitement.

“Really it was a compliment, a form of dog standing ovation,” they said. 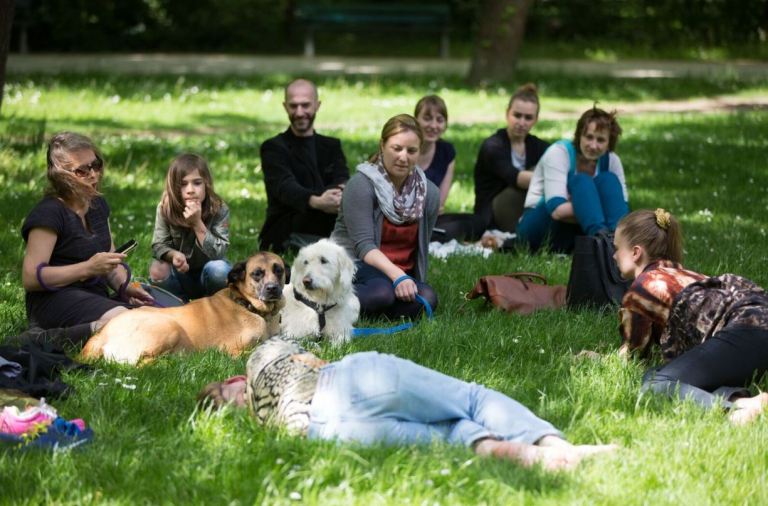 These dogs are thinking, “You couldn’t just take us to see Hamilton?”

But Alex and Krõõt insist that some pets really do enjoy the show. In what’s definitely not an example of wishful thinking, they remembered one dog who “seemed to tell the other dog off” for barking during the show, like when you shush someone for talking during a play. 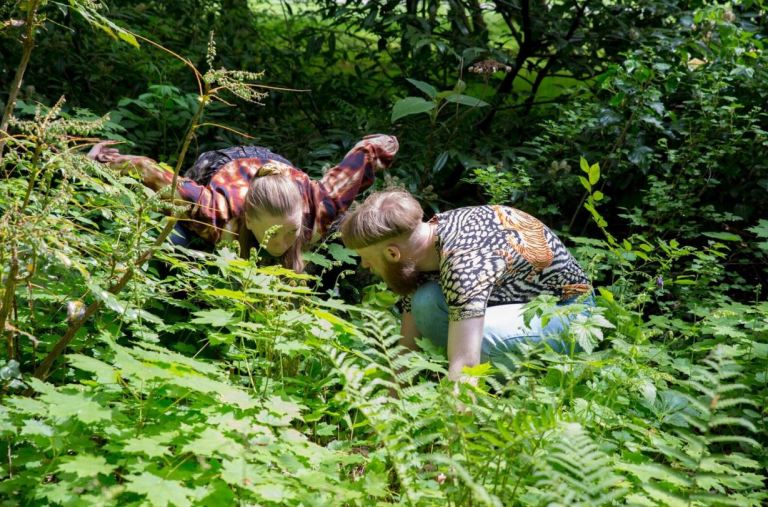 Poison ivy is a small price to pay for art.

If you’re blown away and want to hire Alex and Krõõt to cheer up your pet, unfortunately they’re limited to shows in Europe for now. They’re performed about 80 shows in Austria, Brussels, and the UK. 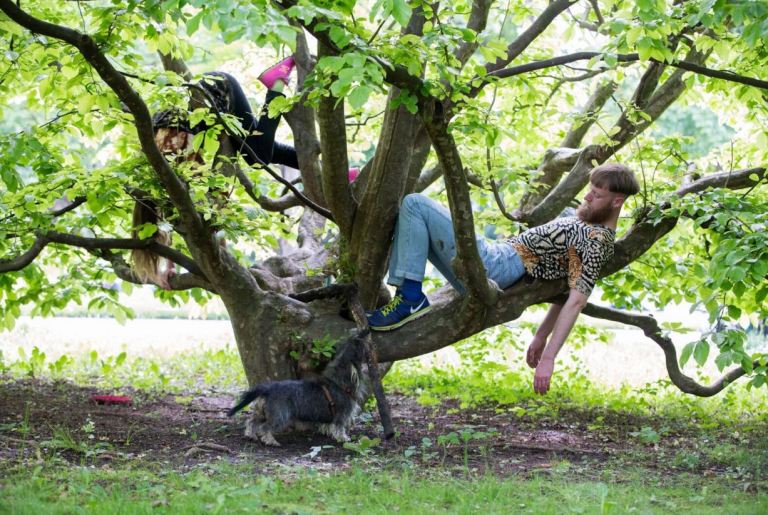 Pictured: an inconsiderate dog interrupting live theater to ask for a game of fetch.

Alex and Krõõt met in grad school in Amsterdam but now live and work in Vienna. So now, in addition to being the home of Mozart, Schubert, and Freud, Vienna can boast that it’s the birthplace of performance art for pets. 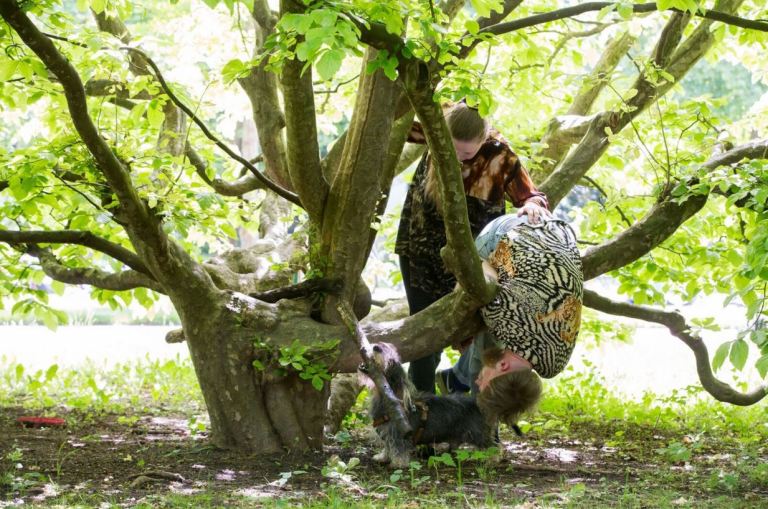 Some theater patrons are so rude!

They first got the idea for pet performance art while giving a presentation comparing different types of artists to different house pets. 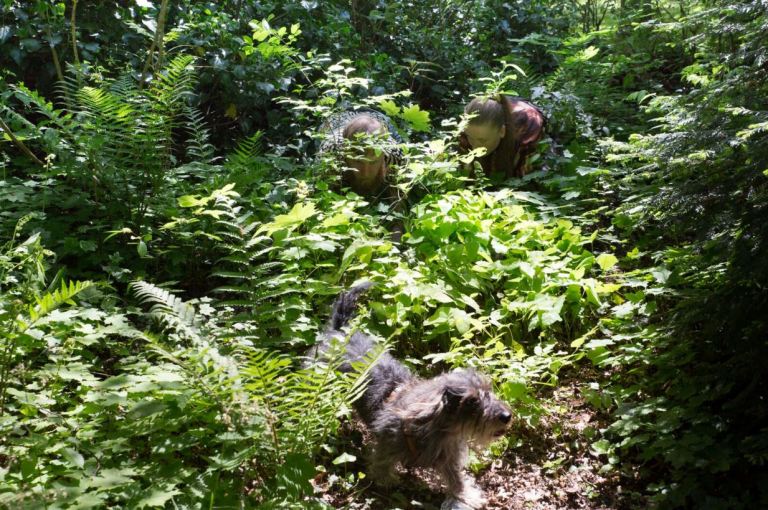 That’s when they realized that modern house pets don’t have the same responsibilities as pets of yesteryear, like catching mice or guarding the home, but are primarily used for companionship. Alex and Krõõt decided that house pets must suffer from boredom due to the monotony of their day-to-day lives. 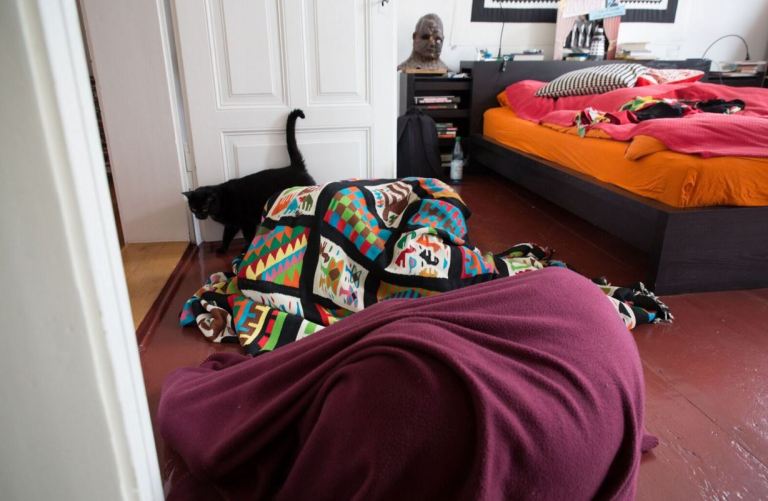 During their shows, Alex and Krõõt are also known to get under blankets and writhe around. Amazingly, it hasn’t gotten them kicked out of a home. (Yet.)

Once they had the idea, they teamed up with Vienna-based pet therapists Bina Lunzer and Petra Ott. 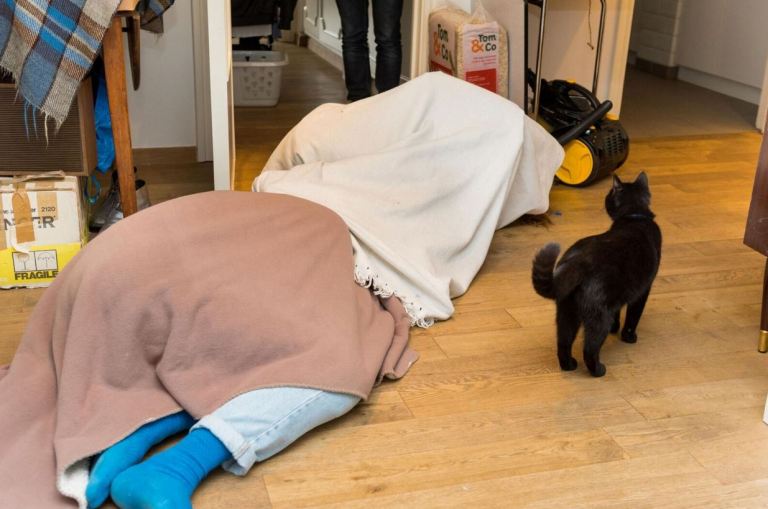 If this cat could talk, she would say “Get a room.”

In the end, we can’t say for sure if any of these pets have been entertained or not, but one thing’s for sure: Alex and Krõõt have entertained the hell out of us.

You can watch Alex and Krõõt in action, including all their animal noises and movements, in the video below. We heartily encourage it: