Teacher Asks Kindergarteners To Create Cook Book, And The Recipes Are Hilarious

Cooking is a skill that takes years to master. This is why your average kindergartener, who’s still learning how to tie their shoes, is most likely a terrible cook. So when you ask a group of five- and six-year-olds to write a cookbook, you can guess what would result–bizarre, nonsensical, and hilarious recipes.

Jordan Adams is a Texas-based joke writer, pizza enthusiast, and Twitter user. When his nephew Ethan’s kindergarten class wrote their own cookbook, Jordan had to share it with with his Twitter followers.

My nephews Ethan’s pre-k class made a cook book, and all the kids had to come up with all the recipes?? so much better than I could’ve imagined. pic.twitter.com/X5d0Sqzw5N

Ethan’s teacher asked her students to explain how to prepare their favorite foods, and she wrote down their responses word for word. Let’s take a closer look. 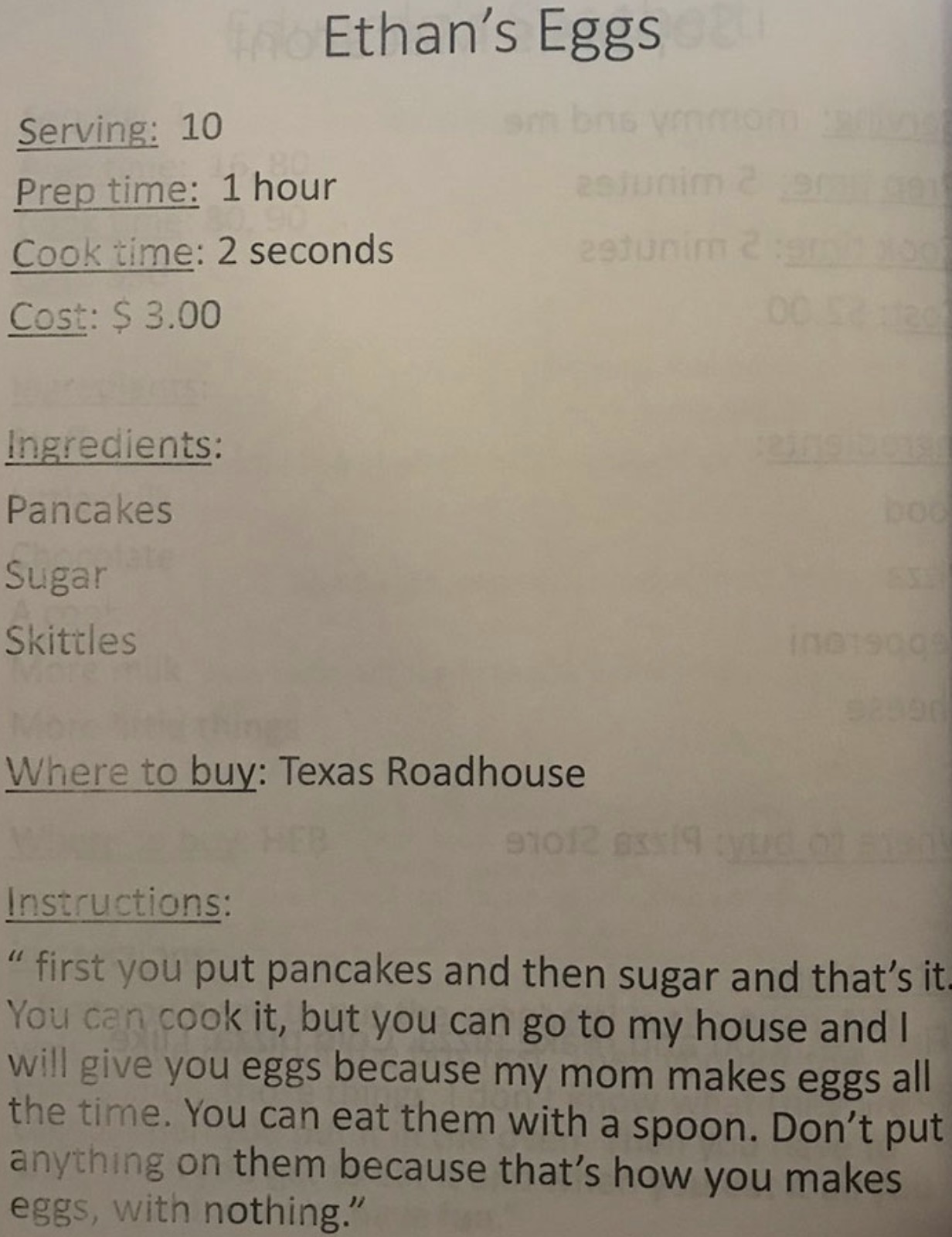 It would be an impressive act of cooking alchemy to to turn pancakes, sugar, and Skittles into eggs. While Ethan’s ingredients might be a bit inaccurate, he does seem to understand eggs’ most important quality as a dish: they’re easy to make. Maybe not so easy that they only need two seconds to cook, but you get the idea. Solid work, Ethan. 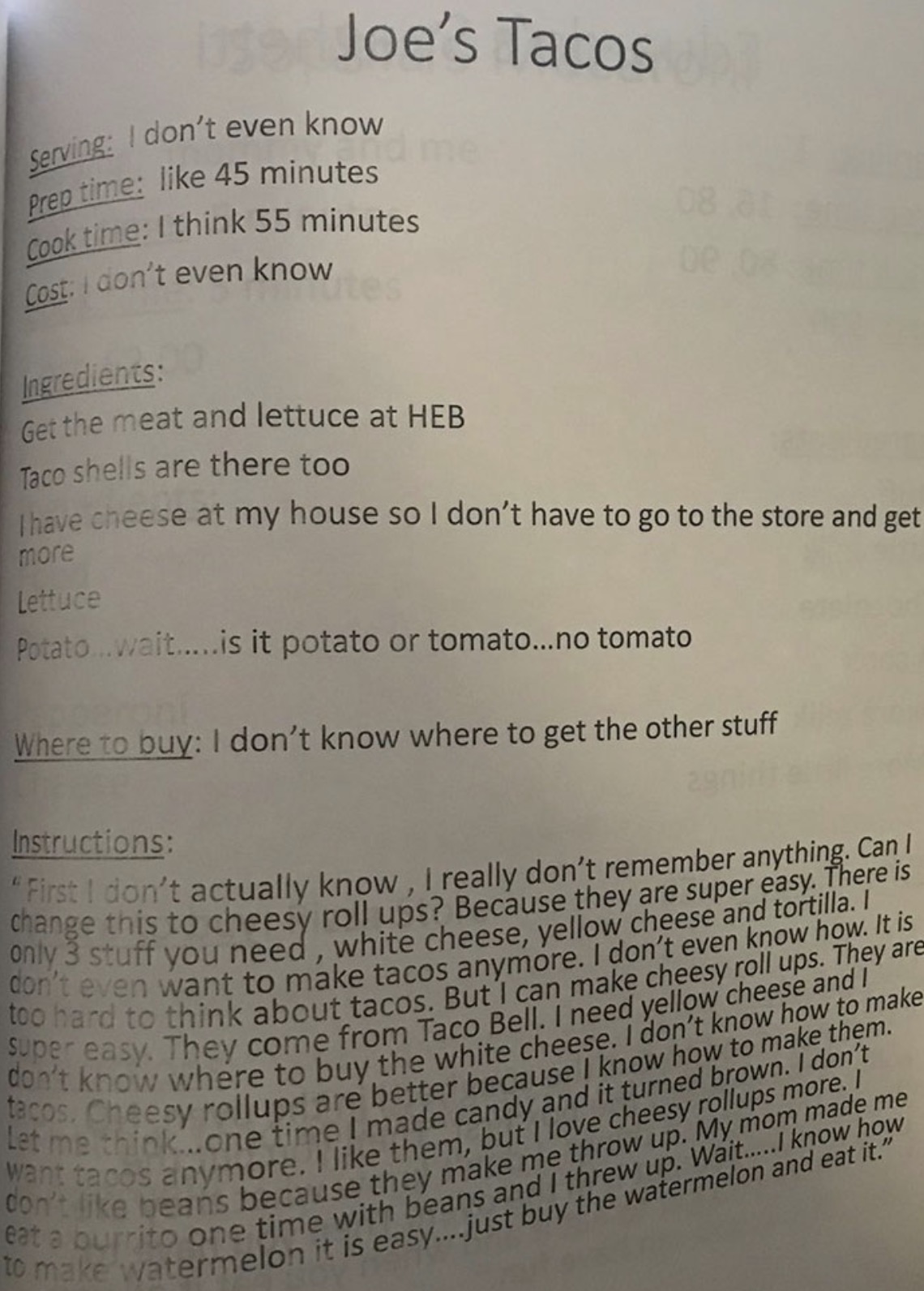 Joe is clearly a free-spirit in the kitchen, the sort of chef who goes by instinct, not by following a recipe to the letter. Details like cooking times and ingredients don’t need to be exact. You can even switch to an entirely different dish mid-cook, if you want to! “Brown candy” also sounds intriguing. Joe has all the makings of a future professional chef. 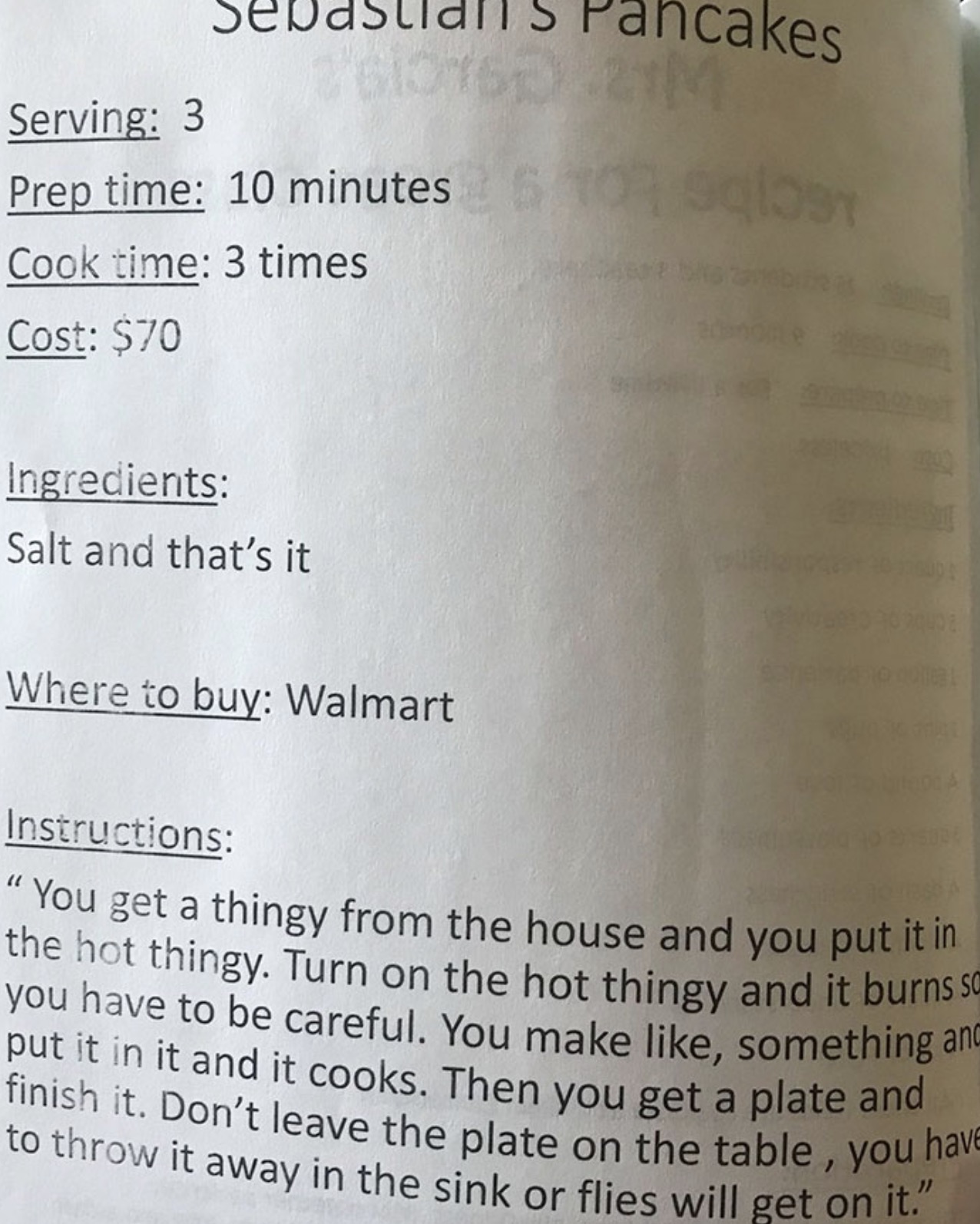 $7o pancakes made entirely out of salt? This kid should open up his own restaurant and become the Salt Bae of breakfast food. At the very least he needs his own Food Network show. Also, nice work reminding everyone to clear the table after eating, Sebastian. Clean-up is part of cooking, too. 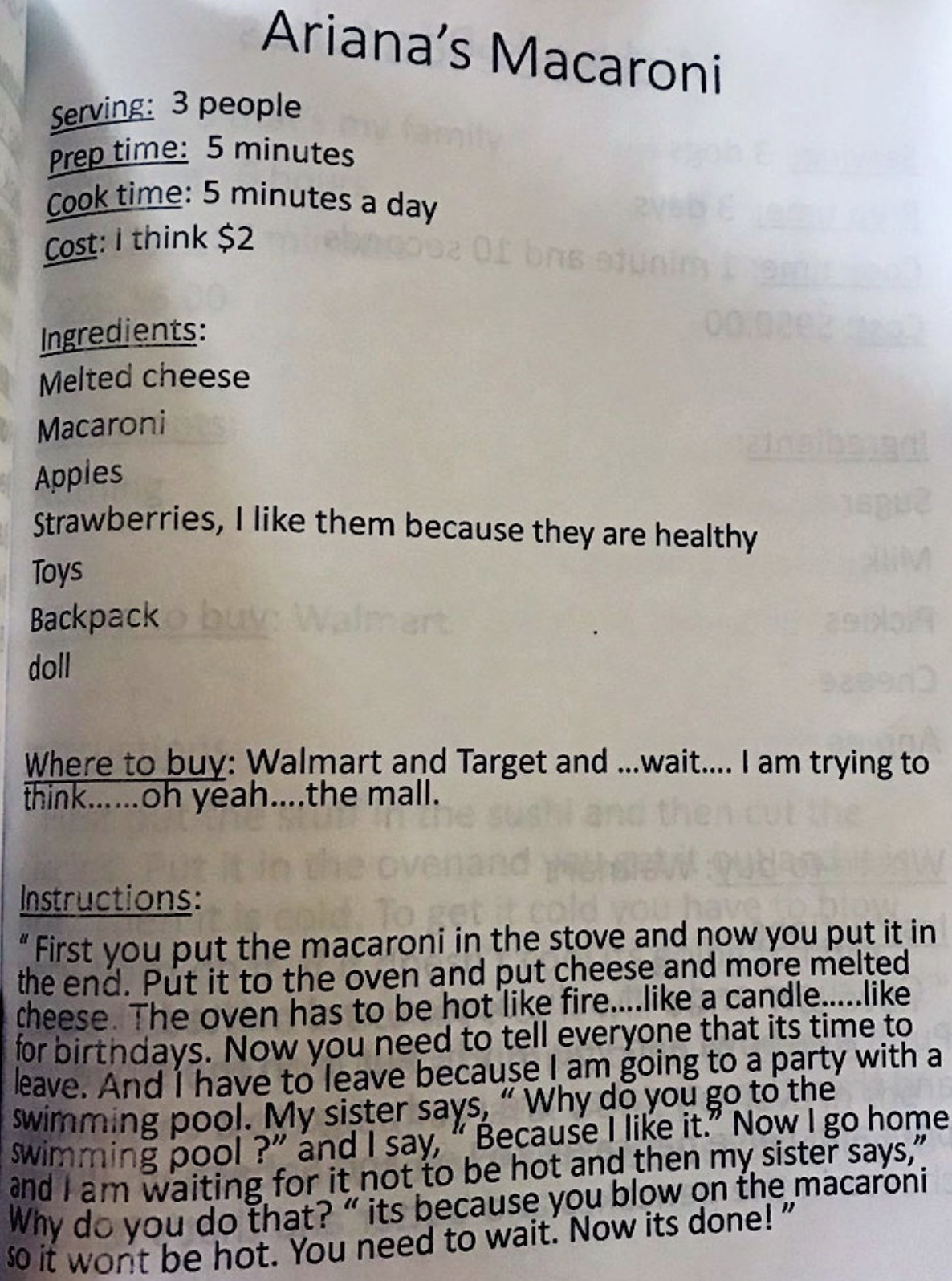 Creative! Macaroni and cheese that includes apples and strawberries sounds like the result a crazy Top Chef challenge that required chefs to combine four random ingredients. Could be delicious, could be disgusting! Then Ariana takes things one step further by including ingredients that are inedible. Top Chef should definitely make the contestants cook something with doll parts. Also, I now realize that every recipe should include a trip to the swimming pool. Thank you, Ariana.

As you can imagine, the kindergarten cookbook went massively viral, racking up over 70,000 retweets, 170,000 likes, and hundreds of responses.

It’s weird, but I can hear kids’ voices while reading the instructions and that just makes Ariana’s Macaroni so much better.

Some folks actually wanted to try the recipes.

Where can I buy this cookbook? ?? I think I want to make joes tacos they sound good ??

While some teachers wanted to try writing a cookbook with their classes.

I’m a prek teacher and I think I want to do this?

But most of all, people wanted more.

I will literally pay you real money for a full copy of one of these cookbooks, I’m not even slightly joking

Maybe one day we’ll all be able to read The Kindergarten Cookbook, but until then, these four recipes will have to do.