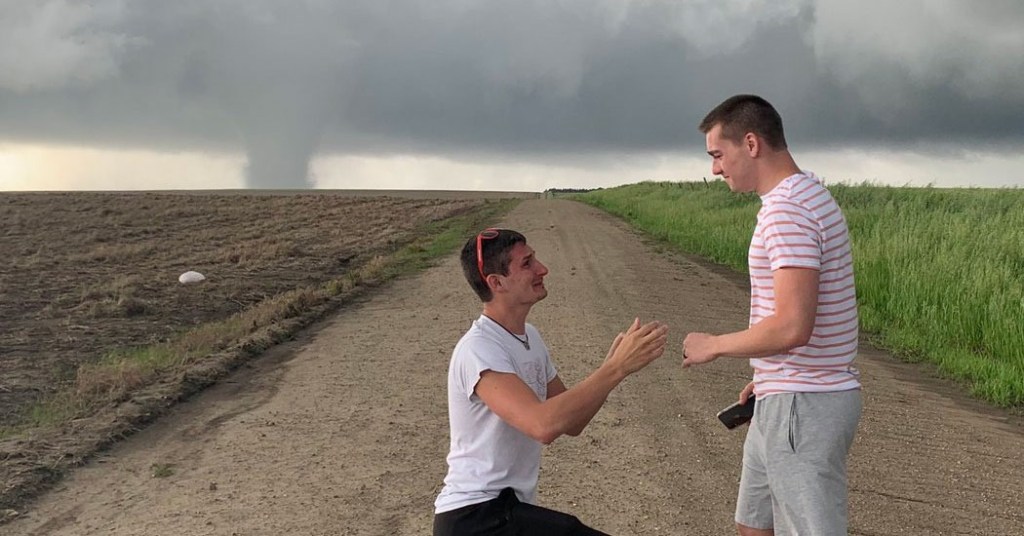 Storm Chaser Proposes To Boyfriend In Front Of An Actual Tornado

Asking someone to marry you is already one of the scariest moments in a person’s life. You’re about to make a lifelong commitment without nearly enough information to make such a decision. It’s terrifying!

But professional storm chaser Joey Krastel recently decided to make an already scary moment even more gut-wrenching by adding actual danger to the equation. In true storm chaser fashion, Joey popped the question in front of an actual tornado.

The 2 loves of my life pic.twitter.com/Cv4eviechZ

Joey is a meteorologist and risk analyst for the Maryland Emergency Manage Agency, but he’s been a storm lover for as long as he can remember. Ever since seeing his first tornado at age four, (and getting over his fear of them), he’s been obsessed with them.

“It was at that moment where I knew everything I wanted to do from then on out,” he told NBC News. “Every meteorologist has a weather story from when they were little that defined their path.”

Joey estimates that he’s chased over 70 storms in his career.

This absolute beast crossed directly in front of us yesterday – Tipton, KS pic.twitter.com/wXQ47V6OOU

Chris and Joey’s mutual love of extreme weather events brought them together. Before the couple met, they followed each other on social media. But one day Chris made his move, messaging Joey, “Hey, do you actually chase tornadoes?”

The tornado proposal wasn’t spontaneous–Joey has been planning it for a while. “It was always in the back of my mind to get engaged during storm chasing,” he said. “I felt like it would be this perfect way to seal the deal.”

And last Tuesday, Joey finally had his opportunity. That evening, a tornado touched down near Kansas City, injuring 15 people and prompting the Douglas County Office of Emergency Management to declare a “tornado emergency.” Thankfully, there were no fatalities.

Joey and Chris had travelled to the area and were chasing the tornado from Salinas to Tipton. It was a hectic day as you might imagine, so Joey had to seize the first opportunity. “It all just kind of came together and happened so quickly,” he said. “I was like ‘OK, this is it.'”

Joey got down on one knee, and Chris said yes.

The newly engaged couple didn’t have time to savor the moment, since the tornado was bearing down on them. “I called to my friends to get back in the car,” he said. “I was just so emotional just because it was my happiest place, being with him next to the storms.”

Joey and Chris’s engagement photo has deservedly gone viral, racking up over 10,000 likes on Twitter. But not everyone is happy about it. Some news sources slammed Joey and Chris for encouraging  a dumb Internet trend that’s seen people take selfies near tornadoes and other dangerous weather events just for social media attention.

And no, the average person shouldn’t go anywhere near a tornado for any reason. But Joey and Chris are professional storm chasers, well aware of the risks involved with their jobs.

Joey also doesn’t want you to follow his example, and stay far, far away from cyclones. “People need to listen to the warnings and listen to the National Weather Service and their local meteorologists,” he told Yahoo. “They know what they’re talking about and their only goal is to save you.”

Omg we landed and came home to an awesome little engagement party!! Thank you guys!!! pic.twitter.com/7eqWWkH3iw

Joey and Chris concluded their midwest tornado chasing trip with jaunts to Texas and Oklahoma, then returned home to an engagement party. They have yet to set a wedding date.

It’s normal to get apprehensive in the run-up to your wedding. But since Joey and Chris have already survived a deadly proposal, the rest of their wedding should be a piece of cake. We wish ’em the best!