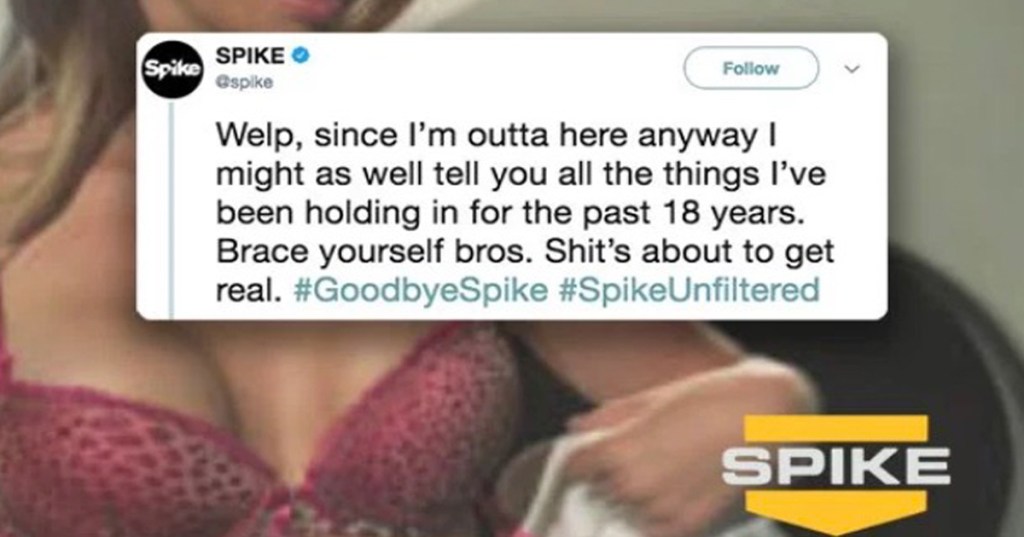 Since it debuted back in 2003, Spike TV has been a blight on the television landscape. The channel shamelessly targeted the young male demographic with a steady stream of aggressively bro-ey TV shows. And even though the network did sometimes offer more varied programming, it was never quite able to shed its fratboy image. That’s what happens when you unleash Manswers on the world.

For that reason, Spike has long been the go-to example for everything that’s wrong with the world. And today, now that Spike TV has officially died and been rebranded as Paramount Network, one Spike employee is admitting he feels the same away about the network we all do, with a Tweet storm taking potshots at the channel.

Maybe is a real collection of a disgruntled Spike employee’s years of pent-up frustration. Or maybe it’s just a viral stunt to gin up interest in the rebrand. But even if it is fictional, these complaints and revelations can’t be too far from the truth.

1. How the sausage gets made.

I was baked when I pitched 1000 Ways to Die. Those episodes are mostly based on my nightmares.

We had a show called The Joe Schmo Show. Apparently every decent show name was taken.

There’s a reason all our early shows were CSI, UFC, TNA, MXC, UTI. No one around here knew how to read.

4. Is that the writers’ room for Blue Mountain State?

I clogged up the 4th stall in the 7th floor men’s room over 30 times last year.

My favorite number is 329 because it’s the number of times COPS is on every night.

The “get more action” tagline was actually my personal mantra. I was in a 3 month dry spell.

I was extremely disappointed when Stripperella had no nudity. I aired that show solely based off the name and the potential for frontal. #GoodbyeSpike #SpikeUnfiltered

I honestly thought catch a contractor was a show about STDs.

When we greenlit TNA we thought we were buying something entirely different… but wrestling turned out to be ok.

I never thought rebranding would be one of the 1000 ways to die. I’m out. PEACE!