If you’ve ever been dismayed by your fellow humans’ lack of scientific literacy, maybe this article will cheer you up. Because people have ALWAYS believed crazy stuff masquerading as science. Just look at phrenology, which was the practice of diagnosing a person’s personality and mental abilities by…measuring their skull.

The practice of phrenology goes all the way back to 1796, when German medical student Franz Josef Gall began observing his fellow classmates and noticing relationships between their physical attributes and their scholastic achievements. For example, the really bright med students all had “prominent eyeballs.” (However, he was unable to develop a theory about why his fellow students never invited him to parties.)

Which brings us to the subject of today’s article, the 1902 self-help masterpiece, Vaught’s Practical Character Reader, by Louis Allen Vaught. Vaught’s book is meant to be a practical guide for how to read people based on the bumps on their noggins. The book was met with popular and critical acclaim. And all of it is wrong.

Well, not 100% of it. See, even though phrenology is total bunk, the first part of it, the part about the brain and the mind being linked? That part, at least, was right. But everything else? Fair game for ridicule.

1. Phrenology: It’s All About The Bumps 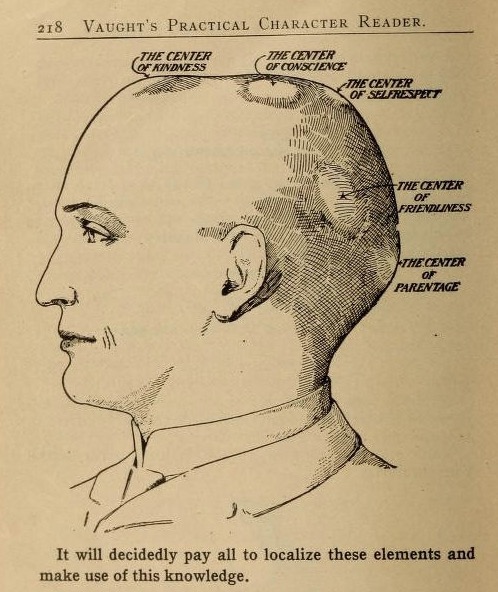 According to Vaugt, different parts of the head correspond to different aspects of your personality. So, if you want to know how friendly a person is, just look at the back of their head. Sounds simple, right? Well… 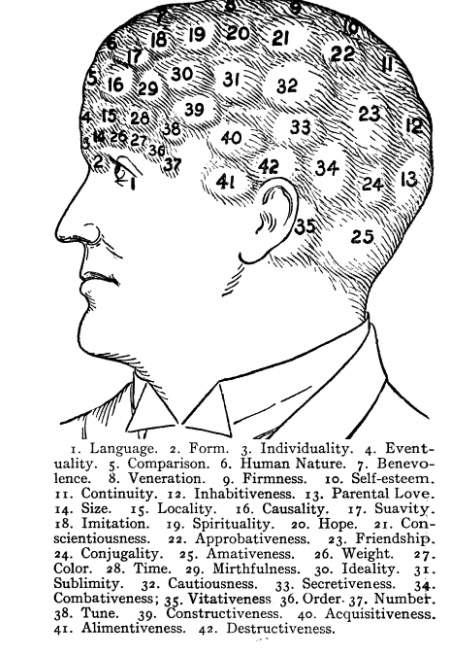 Phrenology is easy, folks! Just memorize the names of these 42 made up locations on the your head! Then you can say things like, “Whoa! You’ve got an awful zit right there on your Alimentiveness Center. Want me to pop it for you, Mr. President?”

3. The Head And The Body 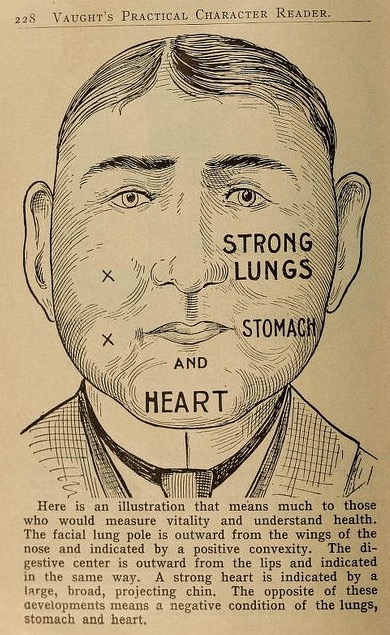 But that’s not all! The face/head can also tell us about a person’s physical attributes. Based on an examination of this man’s head, we can tell he has a strong heart, a strong stomach, strong lungs, and a complete inability to get a good haircut.

4. More Fun With The Head 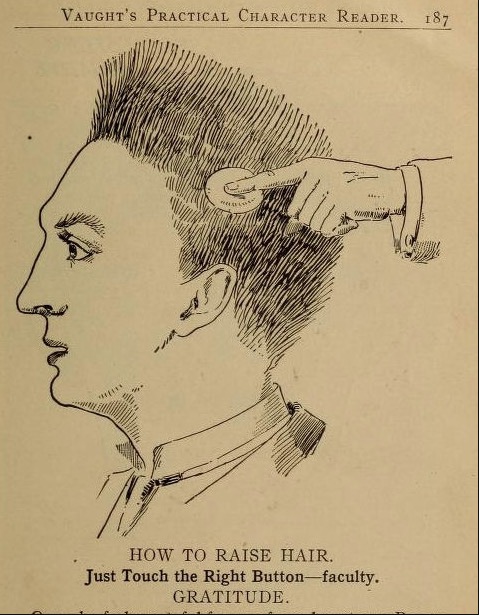 Hey, there’s a button on our heads that makes our hair stand up! And who says science isn’t fun?

If you don’t believe in the Hair Button, perform an experiment of your own. Go up to someone on the bus, touch them in the Hair Spot, and I guarantee you will get punched right in the Vitativeness Center. 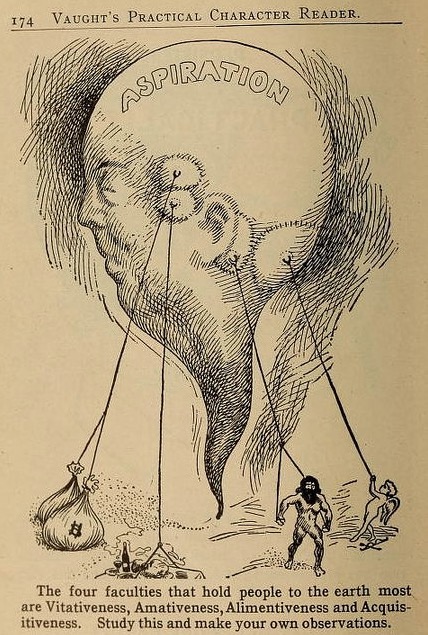 My observation is that Mr. Vaught is a fellow who enjoyed his LSD.

6. How To Pick A Husband 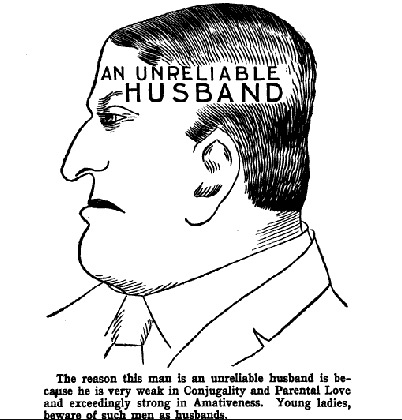 Vaught’s Practical Character Reader wasn’t just a primer on phrenology, it was also an early version of a self-help book, which is why it was originally called His Skull Bumps Are Just Not That Into You.

7. Two Roman Noses Is One Too Many 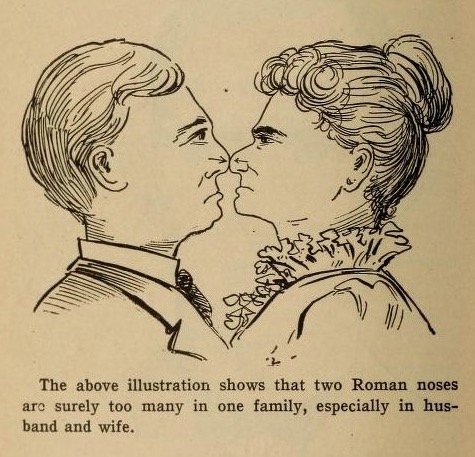 In this illustration, Mr. Vaught explains how a man and woman who both have “Roman noses” because that means…they’re related? Or it’s like if two Scorpios got married? I honestly have no idea.

But if it’s inbreeding, I think this couple is safe because they clearly have no idea how to have sex.

8. How To Spot A Bad Mother 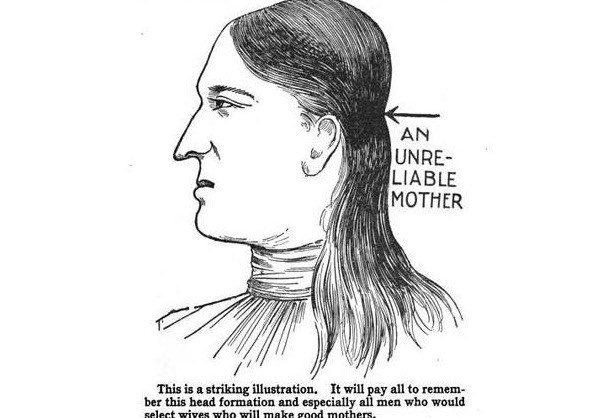 Fellas! Watch out for ladies who look like this! And if you have trouble remembering this shape, just take a map of Montana with you everywhere you go. 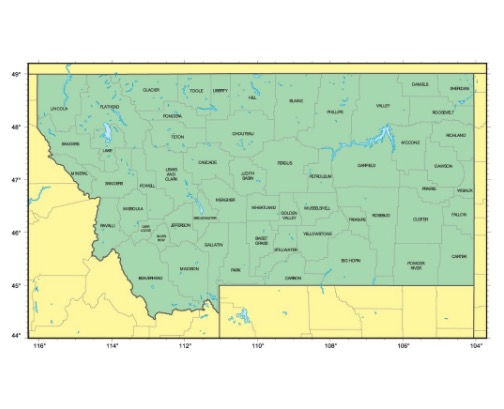 Photo Credit: Maps of the USA

9. This Dude Is Lazy 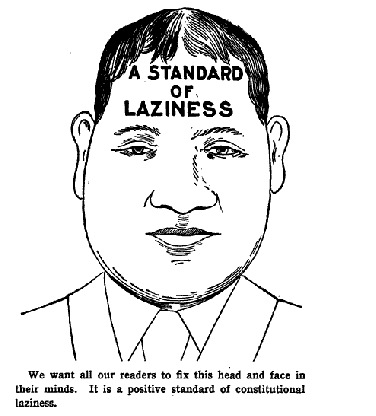 I’m pretty sure the guy in this drawing is just dude L.A. Voigt had a bad experience with.

L.A. VAUGHT: Oh, so you won’t re-shoe my horse ’til Tuesday? Let’s see how you like being the poster boy for laziness!

10. This Lady Has Lots Of Foot Problems 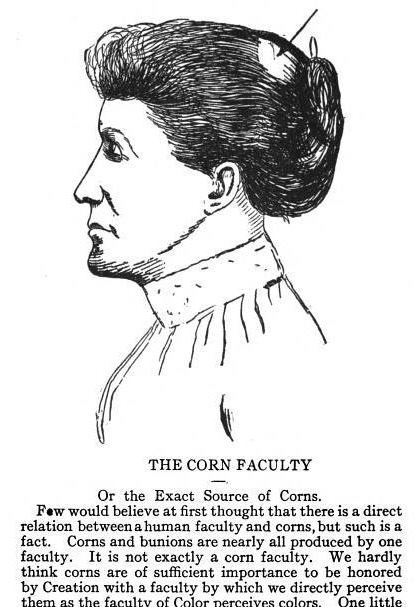 Vaught also believed that the head could determine who had regular foot problems. I’m starting to wonder why L.A. Vaught was ever allowed to have paper and ink. 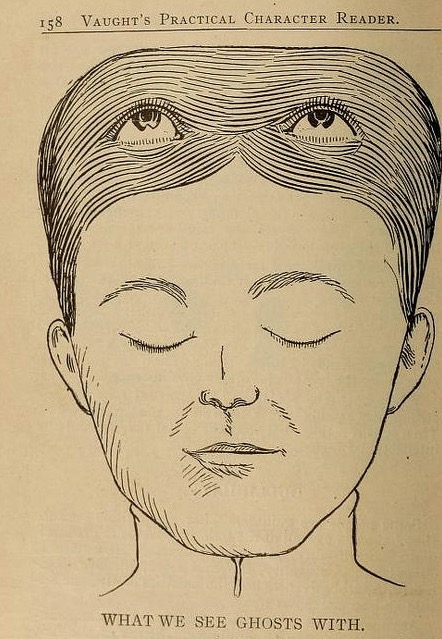 Why is he talking about ghosts? Because apparently in 1902, the process for writing books was a lot like the process for making a breakfast scramble: just throw in whatever the hell you want.

12. And Finally, Avoid This Type Of Head At All Costs 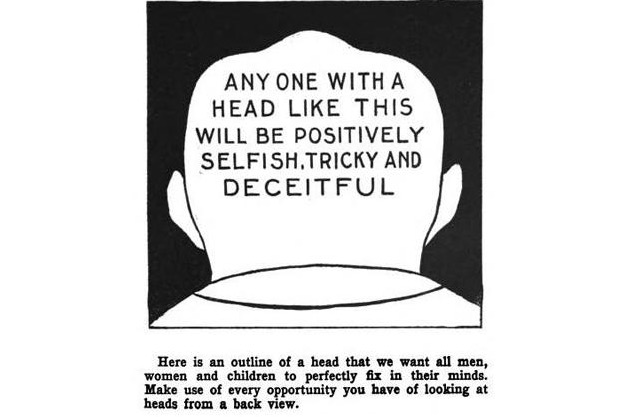 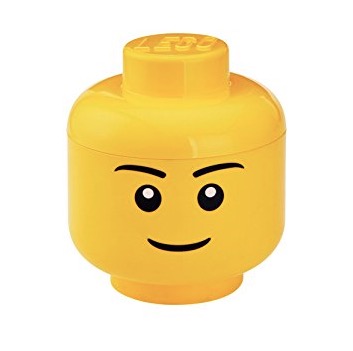 h/t: So Bad So Good and Mental Floss

15 Tweets About Farting You’ll Definitely Relate To
20 People Who Are Major League Jerks
14 Mean (And Funny) Farewell Cakes
15 Funny and Weird Memes Made From wikiHow Illustrations
Dad Trolls Relatives By Photoshopping His Daughter Into Dangerous Situations
15 Tweets That Sum up the Whole Foods Experience
We use cookies to offer you a better experience, analyze traffic, personalize content, and serve ads. Learn more