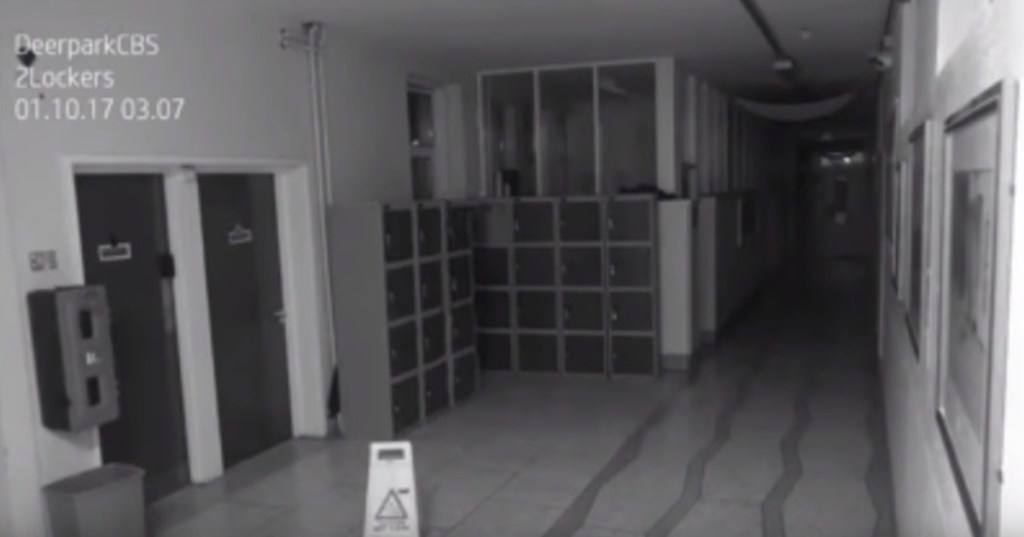 It’s tough enough to get through high school without being menaced the undead, but for one school in Ireland that’s exactly what they’re dealing with.

A security camera at Deerpark CBS, a secondary school in Cork, Ireland, appears to have recorded a video of a ghost stalking the halls. In the one-minute, 41 second video, no actual ghost appears, but many different objects appear to move on their own. Doors slam, lockers teeter back and forth, and even a “Floor Wet” sign gets kicked over.

But enough from me. Take a look for yourself:

Of course, there’s always a chance this video could be a fake. But Aaron Wolfe, the school’s vice principal insists it’s the real deal. As he told Unilaid, “If it’s a prank we don’t know how it was done.” he said. “Motion sensors were set off at this time, that’s how it was caught.”

But if that’s not enough proof for you, teachers also reported that when the video was taken, the hallway had been colder than usual. Seeing as that hallway was located in Ireland in October, I see no other explanation for why it would be so cold besides a ghost.

Oh, you’re still not convinced? Vice Principal Wolfe also says the area is well known among faculty and students for being creepy. One student claims to have heard crying coming from a nearby bathroom stall. Seriously, when has anyone ever cried in a high school? It’s never happened! Has to be a ghost.

But hey, even if it is a fake, it’s a convincing one, and it’s the perfect thing to get you in a spooky mood for Halloween season. Do you think the video is real, or a really good prank? Let us know in the comments!

And, if you are the ghost in question, tell us, why would you haunt a school? Why not haunt a cooler place, like Jay Z’s house, or the set of The Last Jedi? Those are much better haunting options if you’re a ghost.