There’s nothing inherently masculine or feminine about a skirt. It’s just a piece of cloth we wear around our midsections. We only associate them with women because that’s how skirts have been marketed and sold since they were invented in the 1960’s. But things easily could have easily gone a different way. In another universe, there’s another planet Earth where Esquire is putting together its men’s summer skirt guide right this second.

The 1960’s was the decade of the Sexual Revolution, and women and men were reevaluating their roles in society. But at the beginning of the decade, it was still unusual for a woman to wear anything other than a full dress in public. Representative Charlotte Reid sparked an uproar when she became the first woman to wear pants in Congress, and that was in 1969.

With attitudes about women and men changing, clearly there needed to be new types of clothing women and men could buy, and fashion designer Mary Quant provided them. She invented both hotpants and the miniskirt–named after her favorite car, the Mini Cooper. Both of these garments became symbols of the Sexual Revolution, and Quant specifically marketed them as a way for women to dress for themselves.

Meanwhile, a New York City clothing manufacturer was working on another version of the miniskirt. The company was the quite unfortunately named Dorcus Menswear. Its founder, Barney Dorcus, had gotten his start by introducing a new lightweight suit made from surplus military canvas–which was personally important to Barney, as he suffered from chronic body odor.

By the 1960’s, Barney’s son Raoul was in charge, and he was looking for a new signature clothing item. He landed on: The Dorcus He-Skirt. 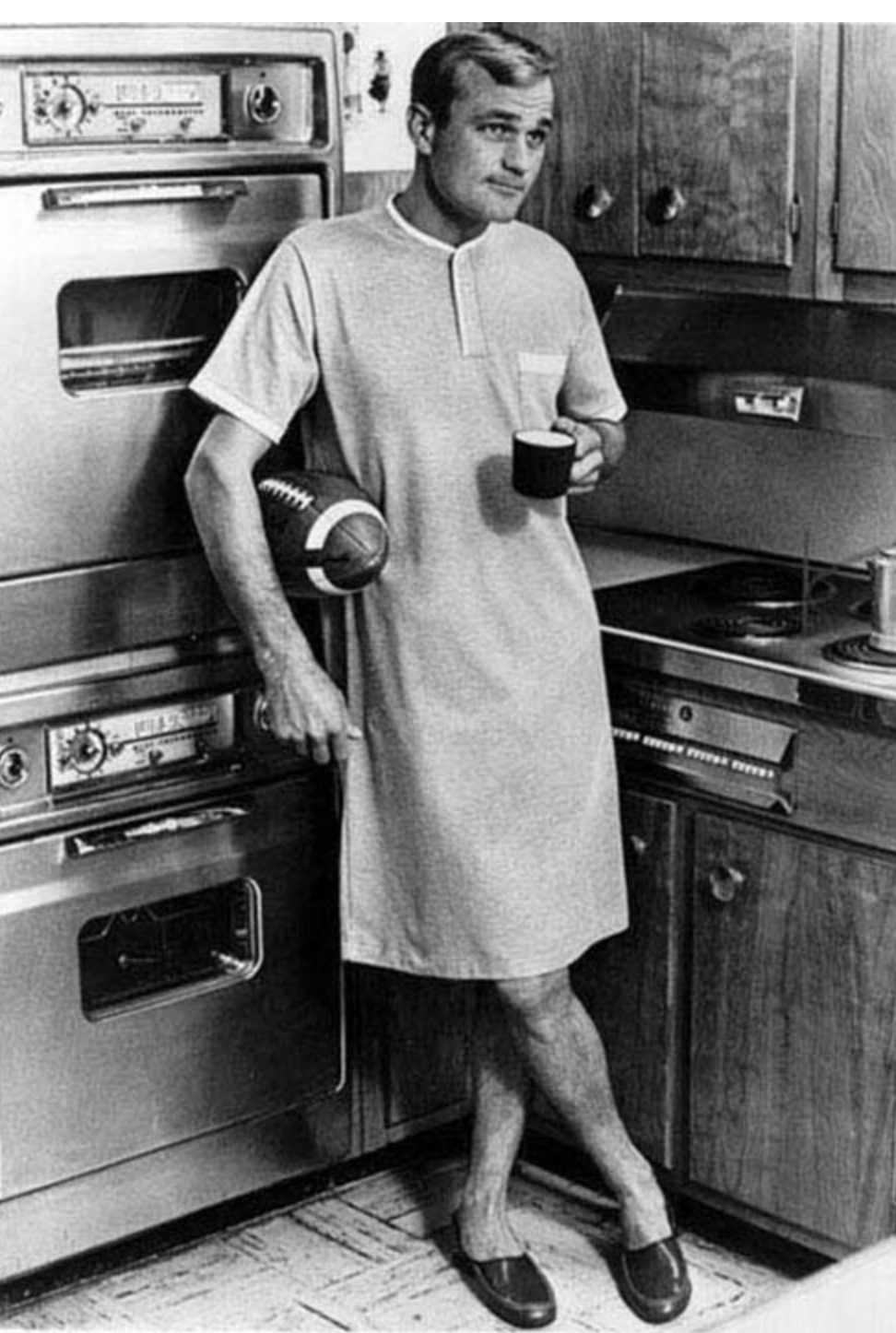 An internal memo from Dorcus reveals more of the company’s plans for the He-Skirt. From the wording, it’s clear the company knew they were facing an uphill battle. The memo suggests hiring a certain type of model for He-Skirt photoshoots: “Only men with large, hairy, developed legs, because in all probability they will be frequently chased by men wielding bats and clubs; models must be able to outrun their critics.” 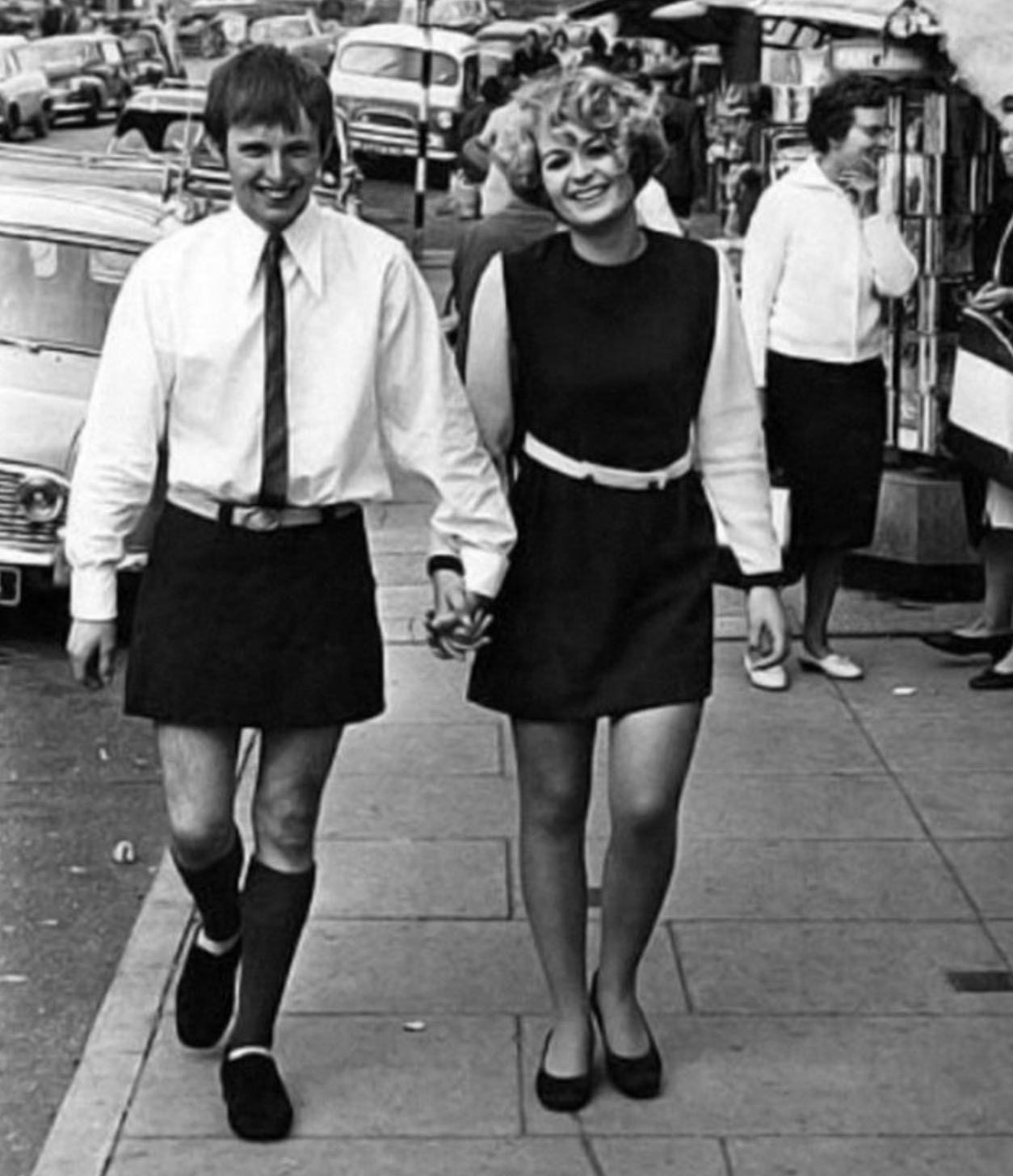 The He-Skirt even had its own jingle: 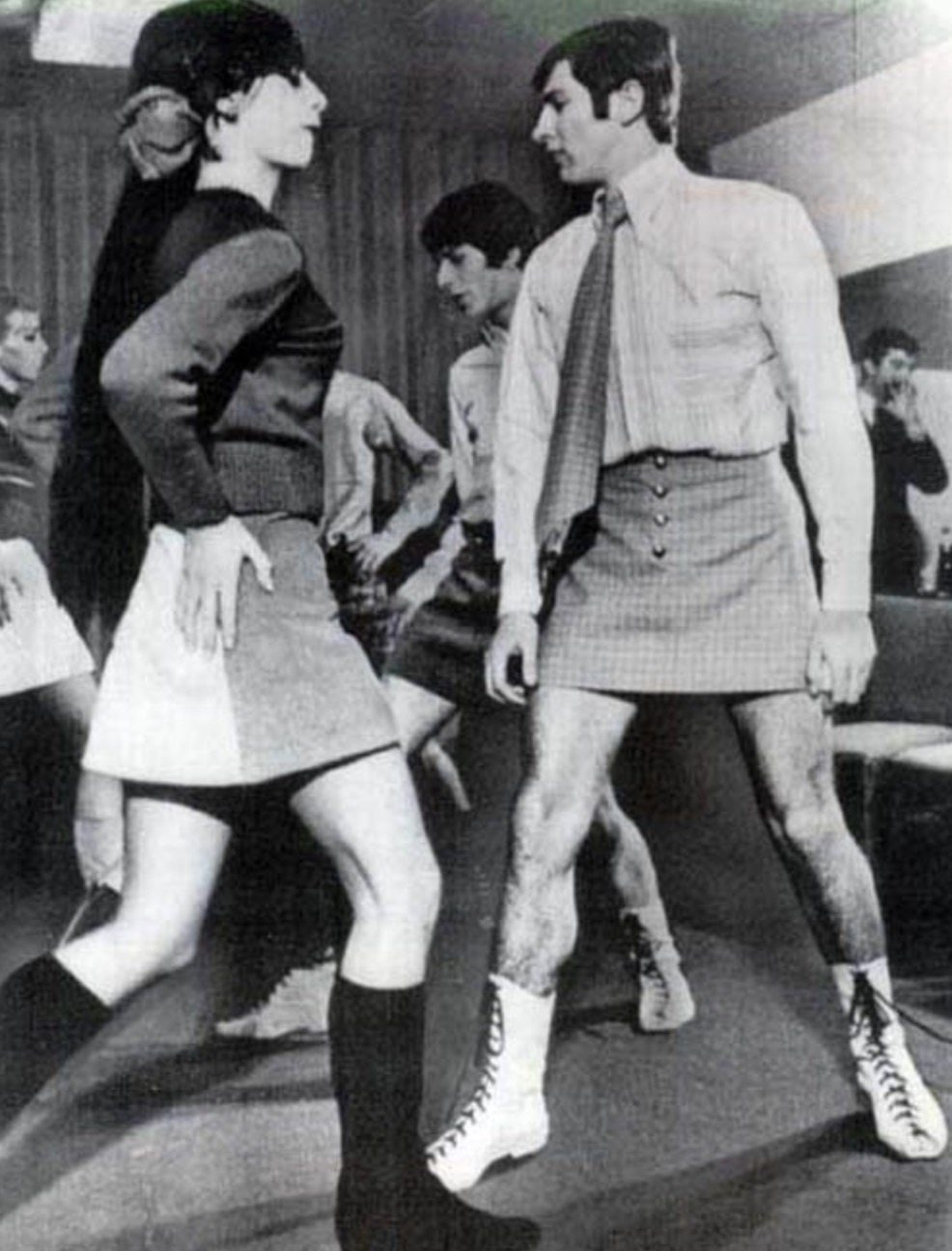 Sadly, the He-Skirt got no further than a memo. It faced so much internal resistance that someone “misplaced” most of the He-Skirt’s designs and photos. Raoul later said that a family friend took him aside and advised him the investors would “break his f–kin’ legs” if he put their money into skirts for men. Raoul would shelve the plans, and skirts for men as a concept would lie dormant for decades. 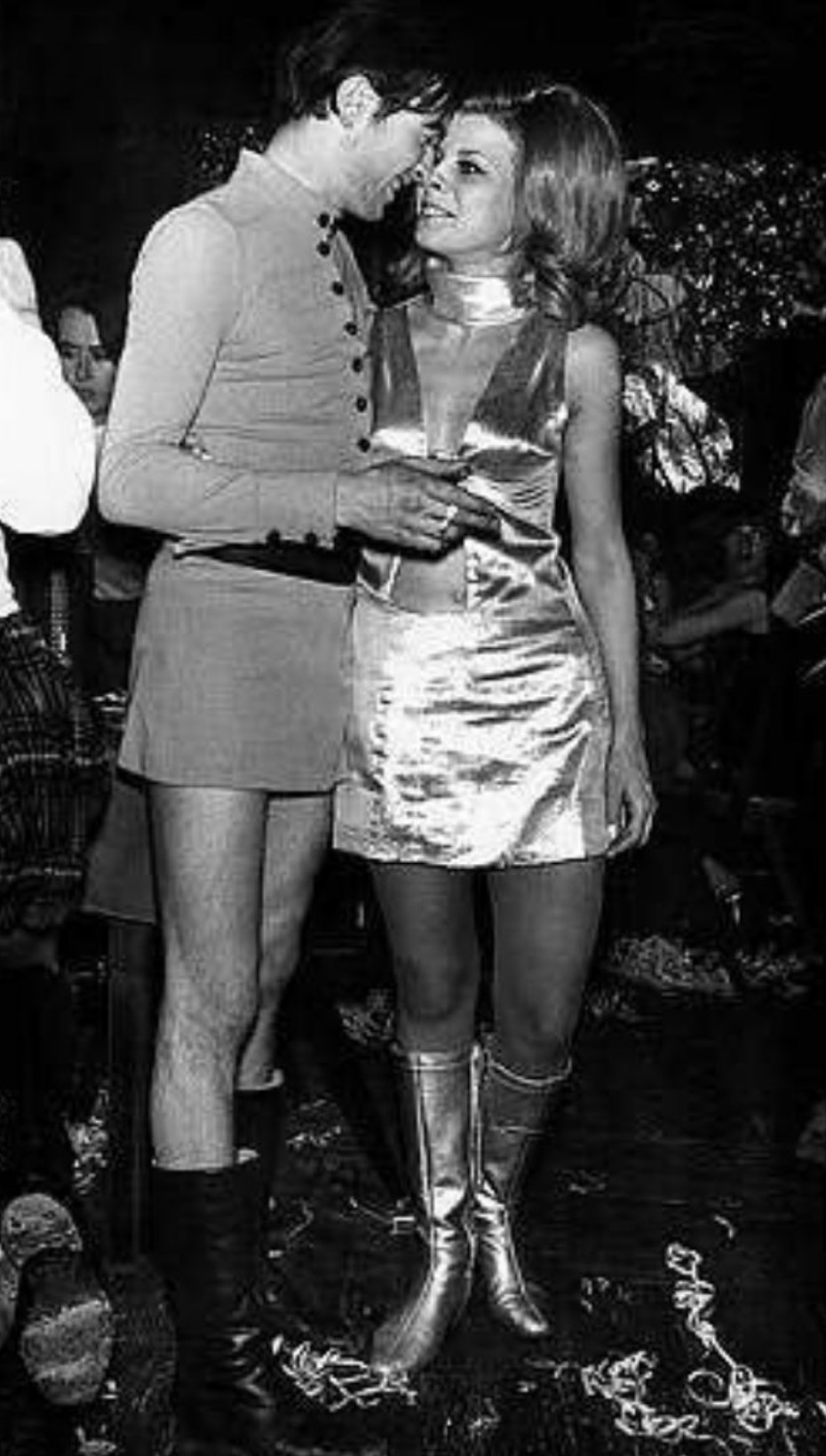 In many countries today, the idea of a man wearing a skirt remains controversial. But year by year, more and more guys are ditching pants and opting for skirts. The city of Poitiers, France, is home to an organization called Hommes in Jupe, (literally “Men in Skirts”), which fights for the right to wear skirts in public, and for the public’s respect for them to do so.

“We’re fighting against prejudice and cliches,” says Dominique Moreau, president of Hommes in Jupe. “Women fought for trousers; we’re doing the same with the skirt.” 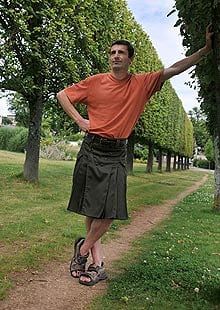 The fashion world is doing its part to encourage guys to wear skirts, too. Major fashion designers have been sending male-identifying models in skirts to the runway for years. This February, Artist Chella Man rocked a pea-green sequin pencil skirt at Vogue’s Opening Ceremony Fall 2o19. 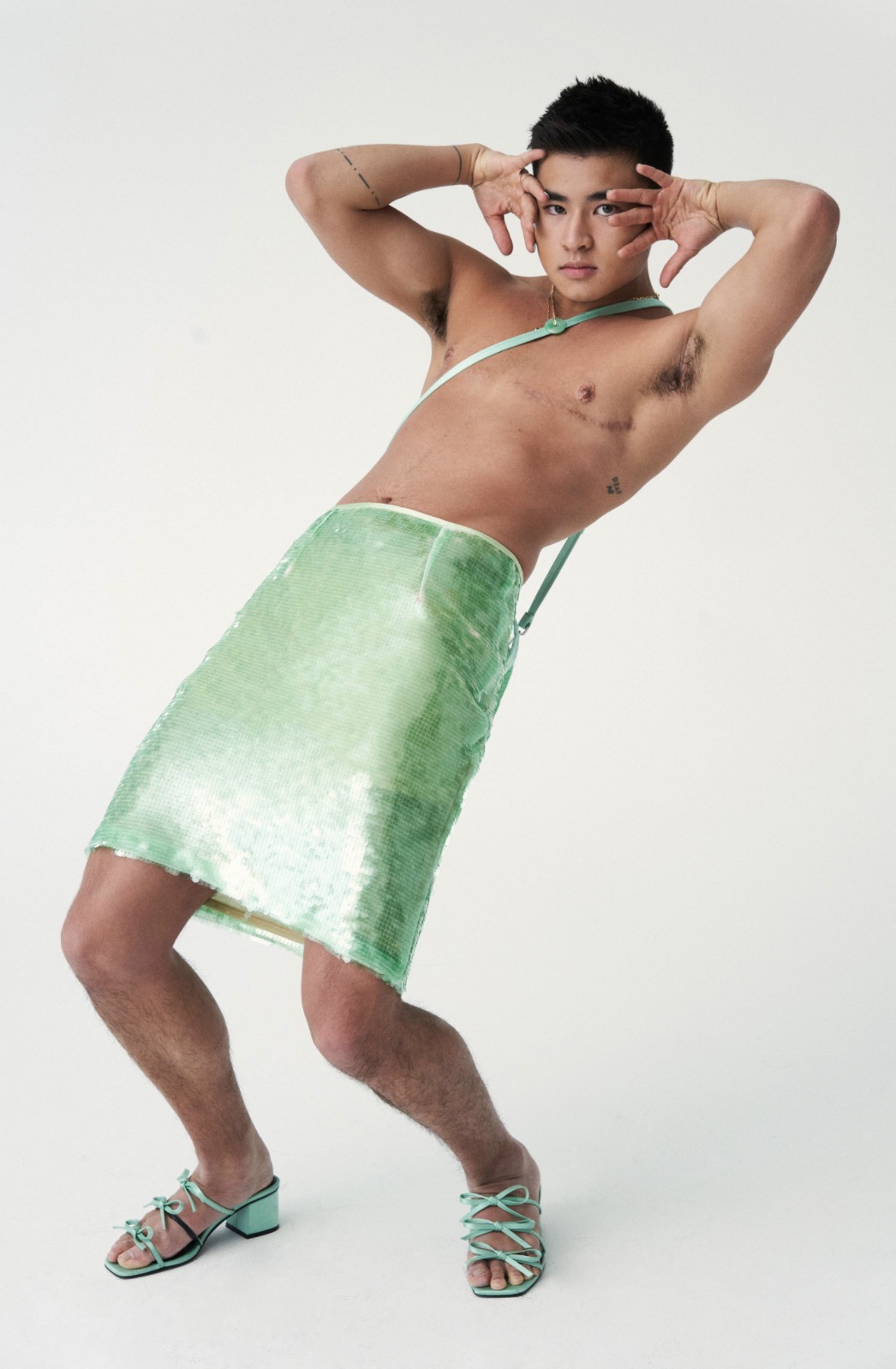 Today, most people still find men wearing a skirt to be shocking, but who knows? Maybe the miniskirt can be just as much of a game-changer for guys in 2019, 2020 and beyond, just like it was for women in the 1960’s.

And you can’t deny it: a skirt is way more breathable, especially in the summer. Don’t your boys deserve some fresh air for once?