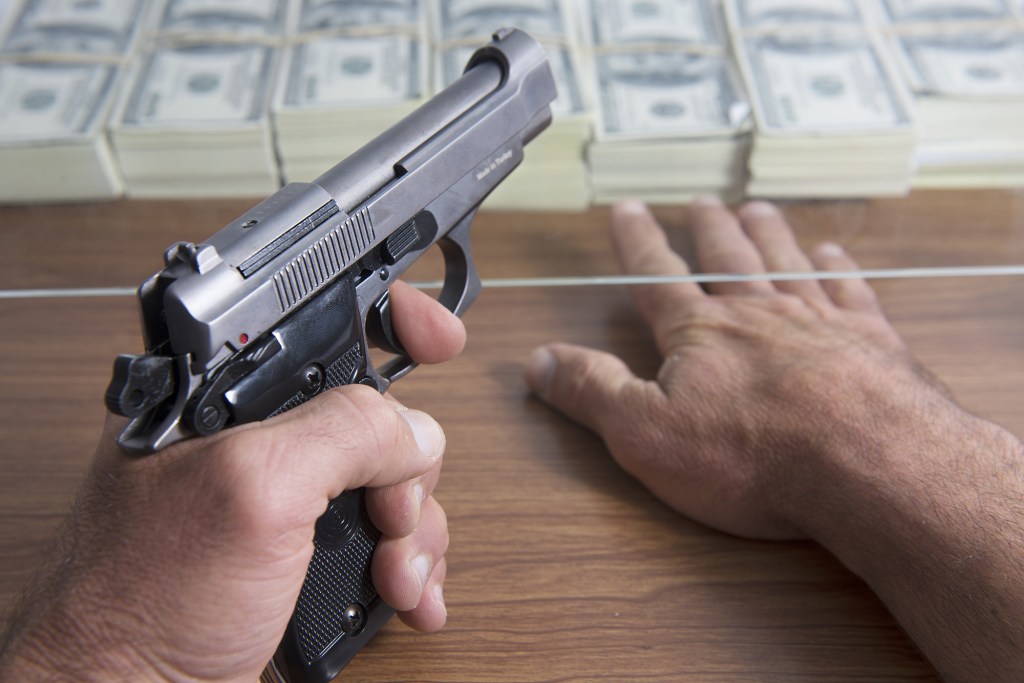 What is a “retired” bank robber, anyhow? Does that just mean you got out before you got caught?

Well, in the case of Reddit-user helloiamCLAY, who offered himself (or herself?) up for a popular AMA with tons of great stories, the answer is a bit complex:

In 2005-06, I studied and perfected the art of bank robbery. I never got caught…

…Bank robbery is the real American Dream. We make movies about it, and as long as innocent people aren’t hurt or killed, our society loves bank robbers.

Also, it seemed like a worthy challenge. I thought it would be quite an accomplishment if I could solve the puzzle and figure out how to get away with it…

…I still went to prison, however, because about five months after my last robbery I turned myself in and served three years and some change.

Apparently, people rob banks for lots of different reasons, but this cat did it for the challenge:

I think most first-timers do it out of desperation for their own personal financial problems, but career bank robbers — in my opinion — do it for the rush or the thrill rather than financial reasons…

…I researched for about five or six months prior to my first one. I studied mostly the things that people did to get caught, and I just tried to plan around those things.

It’s hard to know how people get away since those details rarely make it to the news, but studying how people get caught was incredibly helpful in knowing what to avoid.

Once I did my first bank, very little planning was needed for subsequent banks. I never really scoped out a particular location other than to make sure there was parking that was out of view from the bank.

But even this pro chickened out his/her first time:

It was scary the first time I tried, but I left and didn’t do it.

Though that obviously wasn’t the end of the story…

I returned the next day and wasn’t scared.

It’s not really something you can do if you’re afraid. Fear gets in the way of clear thinking.

I strapped a hammer to my leg under my pants just below my knee in case I needed to break out of a locked door or something, but I never used a gun or anything like that.

u/helloiamCLAY wasn’t big on putting on a show, and that paid off:

[I] walked in the bank and waited in line like a regular customer. Whichever teller was available to help me is the one I robbed.

I simply walked up to them when it was my turn to be helped, and I told them — usually via handwritten instructions on an envelope — to give me their $50s and $100s. There was no threat. I just told them what I wanted, and they complied.

This is how it works in America, because the amount of money a bank gives up ($5-$7k on average) per bank robbery is infinitely less than the amount of business they’d lose if shit got wild in a bank full of customers.

They just want to give you what you want and for you to get the hell out of their bank.

And after the heist?

I usually went to Chili’s or somewhere to eat and chill out.

All bad things must come to an end, as I’m sure somebody says somewhere, and this was no exception. When asked if the plan ever went awry:

Yes. The last one I did.

The teller freaked out as soon as I turned to leave the bank. She started screaming, “lock the doors, lock the doors,” but I ignored it and just kept walking like nothing was happening.

I got out before the doors were locked, but a guy walking into the bank seconds later already found them locked.

He was pissed, of course, because it wasn’t closing time, and he thought he had gotten there too late. He obviously didn’t realize the guy who had just walked out of the bank and past him had just robbed the bank.

And then super robber just… turned themselves in:

I always figured prison was in the cards for me — even before I was doing crime — so it made sense to turn myself in and get it over with, but most of all, I became a father and wanted to just do my time while my son was a baby instead of the cops accidentally figuring out who I was and taking me to jail when my son was older.

Prison was like church camp without the girls or weird counselors.

I was removed from everyone else’s life just as much as they were removed from mine. Mail became the only way I connected with my family and friends.

Prison is lonely and depressing, but it’s also a great place to really work on yourself, if that’s what you want to do. Most men and women waste that opportunity. Thankfully, I didn’t.

I played a lot of chess and read a lot of books. I also wrote a lot, of course. Mail is the highlight of anyone’s day in prison.

There are some pretty bad dudes there, but nobody really wants any trouble unless you just really fuck them over. There’s always trouble if you want it, but it’s pretty laid back most of the time.

You learn the way of life pretty quick in there if you’re smart.

You didn’t think I’d forgotten to tell you about how that teller got fired, did you?

It all started out with a simple question of the most memorable thing someone had said during the robbery:

One teller skimped out on me and didn’t give me all I had asked for, and I told her, “You can do better than that.”

She just shrugged — palms up like a little kid — and said, “That’s all I got.”

Pretty ballsy on her part.

But was that really all she had?

It wasn’t. She was being a really brave idiot. She also pocketed a $100 bill for herself.

Needless to say, she got fired.

How’d they find out about this?

When my lawyer first brought all my paperwork to me, I noticed that the amount was $100 off for that particular bank.

I told him I was 100% sure that they had the amount wrong.

…and they saw her take it.

18 Yard Signs That Went Above And Beyond