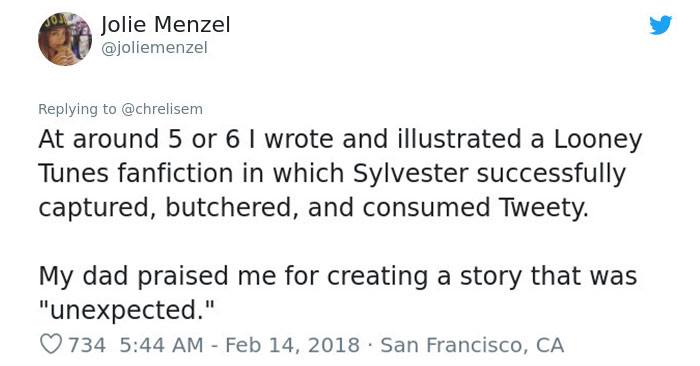 As adults, most of us can remember a moment in our childhoods that shaped who we are today. For example, one time my dad’s car got stuck in the snow and he had to leave my sister and I behind to get help. I was cold, but my sister was colder, and so I gave her my jacket. Even today, I can’t be comfortable if I know someone else is uncomfortable.

Or here’s another example. In middle school, we took a Greyhound to Toronto. As we were about to leave, I had to go to the bathroom. I could have gone at school, but I decided to wait ’til I got on the bus. To my horror, the bathroom was out of service, and I soiled myself in front of all my classmates. And that’s why I never trust bathrooms on public transportation. Both of these moments were equally formative in making me who I am today.

Recently, Twitter user @chrelisem asked her followers to share their own stories about formative experiences. She kicked things off with an example of her own:

What’s a childhood anecdote that says a lot about you?

Mine is that when I was 8 my friends and I went door to door selling homemade keychains so we could buy Bibles for our bullies.

My reasoning at the time was that if they read the Bible they would stop bullying me. I have since come to realize that in the hands of a bully the Bible can be as effective a weapon as any, but hey, my heart was in the right place.

Her followers replied with a number of stories of their own, and here are 15 of the most interesting. And be sure to tell us about your own formative experiences in the comments! (via Bored Panda.)

1. They always do the right thing. Even when it’s completely unnecessary.

I found $20 in can of tennis balls and took it to the police station to turn in. They were like… lol it’s yours.

2. This “Christmas” conspiracy could go all the way to the top!

When I was 5, I told my parents, “There isn’t a Santa Claus, is there.” Not a question – a conclusion.

They said, “Don’t tell anyone.”

That felt wrong – I had helpful info about a huge conspiracy! – so I told all our friends and made our family the scourge of the neighborhood.

At no point did I put stamps on the bills.

When I was a kid (super young, like 7 or 8) I was super into Egypt. For a few month period I thought it’d be smart to fall asleep with my arms crossed over my chest so if I died in my sleep I’d be easier to mummify, as I’d already be in the right position.

5. She never gives up, and never listens to the haters.

My 6th grade teacher told me that I shouldn’t sign up for choir again because I couldn’t sing. – In 7h grade (new teacher) I won first chair, first soprano all state. I proceeded to win more competitions. Ultimately I was awarded voice scholarships to attend university.

6. The squeaky wheel gets the promotion.

In preschool, I refused to nap because I wanted to read. The teachers then put me in charge of reading aloud as the rest of the kids were falling asleep. Win-win, really.

When I was in third grade, I think, I spent half the year telling my classmates about the summers I spent on a kibbutz in Israel. I also taught them Hebrew. Only, I’d never been to Israel, and I spoke zero Hebrew. All blew up on Parents’ Night. ?

8. She’s either an entrepreneur, or a shakedown artist.

My mom worked in a roller rink, so I practically lived there. When I was 7/8, I had regulars paying me to not annoy them while skating ($3 for one session, $5 for both). I spent all the money on video games and snacks. The night my mom caught me, I had $40 on me.

9. He never suffers fools gladly. Even in preschool.

I had a competition with my sister to see how many beads we could shove up our noses. I won, but had to go to the doctor on Xmas eve to have a bead removed with long, scary tweezers. Still, I won.

11. She’s got a sick sense of humor. And that’s wonderful!

At around 5 or 6 I wrote and illustrated a Looney Tunes fanfiction in which Sylvester successfully captured, butchered, and consumed Tweety.

My dad praised me for creating a story that was “unexpected.”

12. Sometimes you just need a change of scenery.

When I was around 6, I decided to run away and live in the woods. When my mom asked why I was packing a bag, I told her, and invited her to join me. Loved my parents, just wanted to try living in a hollow tree for a while, you know?

13. She’s not afraid of the truth. Nor is she afraid of sharing it.

My mom was very big on making sure I learned the factual, scientific reasons behind things because I went to a Catholic school. By kindergarten, I knew the general how-tos of the birds and the bees. And I shared this with my entire class. Sister Mary Was Not Pleased.

14. A future mortician, or horror novelist.

Seven year old me studied the corpses of small animals our cat left outside, and told my mom “I’ve noticed the eyes always go first.”

My neighbour & friend Louise wrapped my willy up in sellotape. We were five. My mum had to cut the tape off with scissors & I never felt embarrassed. She is still -thankfully – helping me resolve life issues.