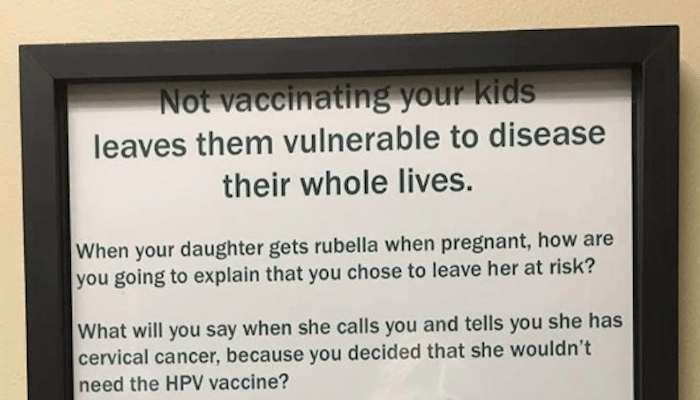 Pediatrician’s Sign Calls out Parents: ‘Not Vaccinating Your Kids Leaves Them Vulnerable’

How do you explain to your children that you’re the reason they are suffering from a life-altering disease?

That’s the question posed by a doctor’s sign that has quickly gone viral due to its powerful message about the importance of vaccinations. Sunni Mariah spotted the sign at her doctor’s office in Colorado and was so affected that she decided to upload it to Facebook.

The debate over whether or not to vaccinate children has been a hot-button issue as of late, with many parents deciding they’d rather not vaccinate their kids. But it’s important to remember the real-life consequences that come with such a serious decision.

The sign reminds parents that the decision to not vaccinate their kids leaves them exposed to dangerous diseases for their entire lives. It then asks them to look ahead to the future and think about how they will respond when their kids start asking questions:

When your daughter gets rubella when pregnant, how are you going to explain that you chose to leave her at risk? What will you say when she calls you and tells you she has cervical cancer, because you decided that she wouldn’t need the HPV vaccine? What do you tell your son when he breaks the news to you that he cannot have kids, thanks to the mumps that he got as a teenager? And what do you say when he gives influenza to his grandma? How do you explain that she won’t be coming home from hospital? Not ever.

Then, it brings it home with a final line that will send chills down every parent’s spine:

Do you tell them that you didn’t think these diseases were that serious? That you thought your organic, home-cooked food was enough to protect them? Do you say sorry?

There are real human lives at stake here… lives that will be lost if we let opinions trump hard, scientific evidence.

According to MSN, the sign was originally written by an Australian doctor named Rachel Heap. Heap works as an intensive care specialist and has come face-to-face with many diseases that could easily be prevented with vaccinations. Many of these cases end with the patient not making it out alive. She calls these patients her “ghosts.”

While working in a children’s ICU, Heap treated two babies who had been diagnosed with whooping cough. One died in the ICU and the other was sent home after six month with possible brain damage. “Those are two of my ghosts,” she says, “but I’ve got countless, endless other ones because people don’t count the adults. The 28-year-old guy who died of late complications of whooping cough. The people who’ve died of influenza – young, healthy people as well as the older and more frail. Name a vaccine-preventable disease, other than polio, and I’ve seen it directly.”

Due to the recent surge of anti-vaxxers, doctors all around the world like Dr. Heap are having to dedicate time and resources to re-educating the public. In fact, the American Academy of Pediatrics recently released a statement on the importance of vaccines. It reads:

Vaccines are safe. Vaccines are effective. Vaccines save lives. Vaccines have been part of the fabric of our society for decades and are the most significant medical innovation of our time. Claims that vaccines are linked to autism, or are unsafe when administered according to the recommended schedule, have been disproven by a robust body of medical literature. Delaying vaccines only leaves a child at risk of disease. Vaccines keep communities healthy, and protect some of the most vulnerable in our society, including the elderly, and children who are too young to be vaccinated or have compromised immune systems.

If you’d like to spread the pro-vaccination message, check out the Northern Rivers Vaccination Supporters. Heap founded the group in an effort to explain to parents the scientific evidence that supports vaccines. After everything she’s seen, Heap poses the question, “How can I not continue this fight?”