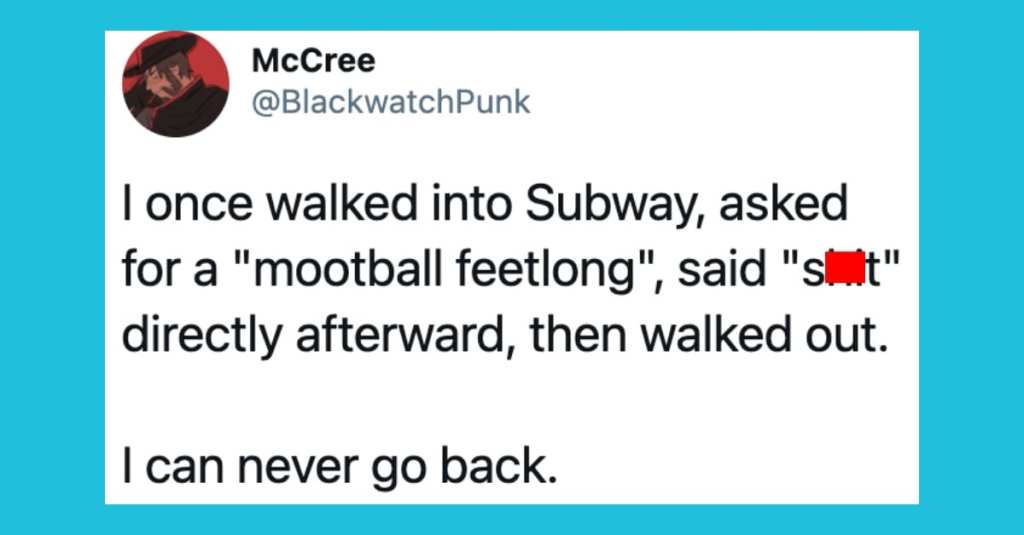 Life is filled with those awkward moments that make you want to bury your head in the sand…and you better be thankful that none of those moments end up on social media for the world to see!

But these folks are definitely not as lucky as we are…because their cringeworthy moments ended up online for all of us to LAUGH at…which is exactly what we’re about to do!

So, without further ado, we present really embarrassing moments that happened to random folks. Enjoy!

And we’re sorry you had to go through that…

I bet that was pretty uncomfortable.

3. You can never step foot in there again.

I once walked into Subway, asked for a "mootball feetlong", said "shit" directly afterward, then walked out.

I can never go back.

I’m gonna need to speak to your manager…

at Dick’s, it is a habit of mine to ask customers if they want their items in a bag after they check out.
today, a woman came up to the register with 2 kayaks to buy.
after ringing them up, i looked her dead in the eye and said “would you like these in a bag?”

5. This is so hilarious.

I wish it was on video!

I was at the airport and the TSA agent told me to scan my license face down, but I just heard “Scan your face down” so I put my face on the scanner and waited. I wish this was a joke but no, it happened and the TSA guy could not stop laughing and now I have to go into witsec. pic.twitter.com/PmXikadxTg

I blanked when I got to the counter at Starbucks and said “vodka soda” and she said “huh” and I said “huh” and then we stared at each other until I remembered I was there for coffee.

7. I know you’ve been cheating on me!

I often think about the time my ex thought I was cheating on him with a craft store pic.twitter.com/wPBsprSrLm

8. I want to know the background of this photo.

I CANT BELIEVE THIS JUST HAPPENED TO ME IM SCREAMING pic.twitter.com/TiDD8NoFi8

A doctor accidentally texted my girlfriend requiring medical assistance. She turned out to be useful. from screenshots

Well, that sure was wholesome.

Syd accidentally sent pics of her dress to the wrong number and this was their response ? pic.twitter.com/SWmcqSFiqh

11. A good way to start a conversation.

Talk about open for a surprise omfg pic.twitter.com/3Ydz7CwpEX

Looking for a job is the worst.

13. This guy needs to go into the Witness Protection Program.

That’s what I call a FAIL.

#fail #failtwitter
Him: Dude have you ever seen me do a back flip?
Me: Na you cant.
Him: Hold my beer

In the comments, share some of the most awkward things that you’ve ever experienced.