Monopoly Has A New ‘Millennial’ Edition, And Millennials Aren’t Happy

Monopoly is definitely a classic, one of the greatest board games of all time–I’m still amazed that Hasbro managed to make real-estate transactions absolutely riveting. But it’s also a product of its time. The game was first created in 1935, and it shows. Its mascot, Rich Uncle Pennybags, is a Gilded Age robber baron–already out of date, because the Gilded Age ended in 1901. The trains and cars are all clearly retro. And the properties, all based on real-life Atlantic City locations, might have been glamorous and exclusive when the game was published, but today are mostly suburbs and casinos.

Hasbro seems to know that old-school Monopoly feels, well, old. And they’ve periodically updated it for contemporary audiences. But the newest version is more painful than landing on Boardwalk after it has a hotel. It’s called Millennial Monopoly. Not only does it sounds like a boring-ass game that nobody would want to play, it’s also made everybody mad. 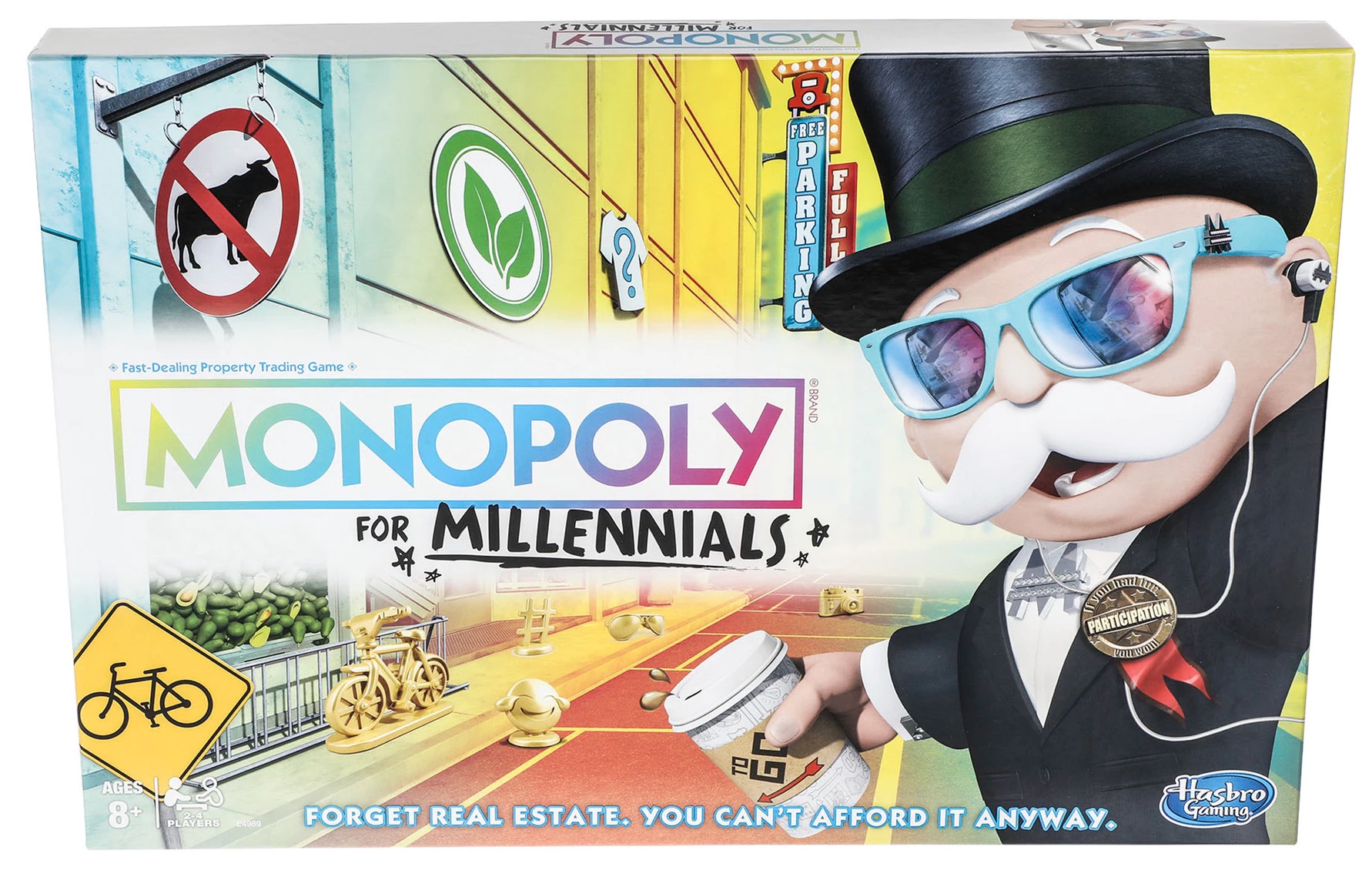 Oh boy! Right off the bat they’re KILLING it with the millennial jokes. Uncle Pennybags now has a participation ribbon–because millennials are so coddled, RIGHT?! He’s also got a latte, some earbuds, and…is that some sort of virtual reality headset instead of a monocle? I have no idea.

But the biggest change is to the gameplay itself. Check out the bottom of the box:

Photo Credit: WalmartHAHAHA! Because millennials are broke! Millennials playing a game where you buy property would be like like making a game for vegans where all you do is make sausage. HILARIOUS!

They’re correct that millennials aren’t real estate magnates–we buy houses at lower rates than Baby Boomers and Gen Xers. But what is Monopoly if about, if not buying property? Glad you asked… 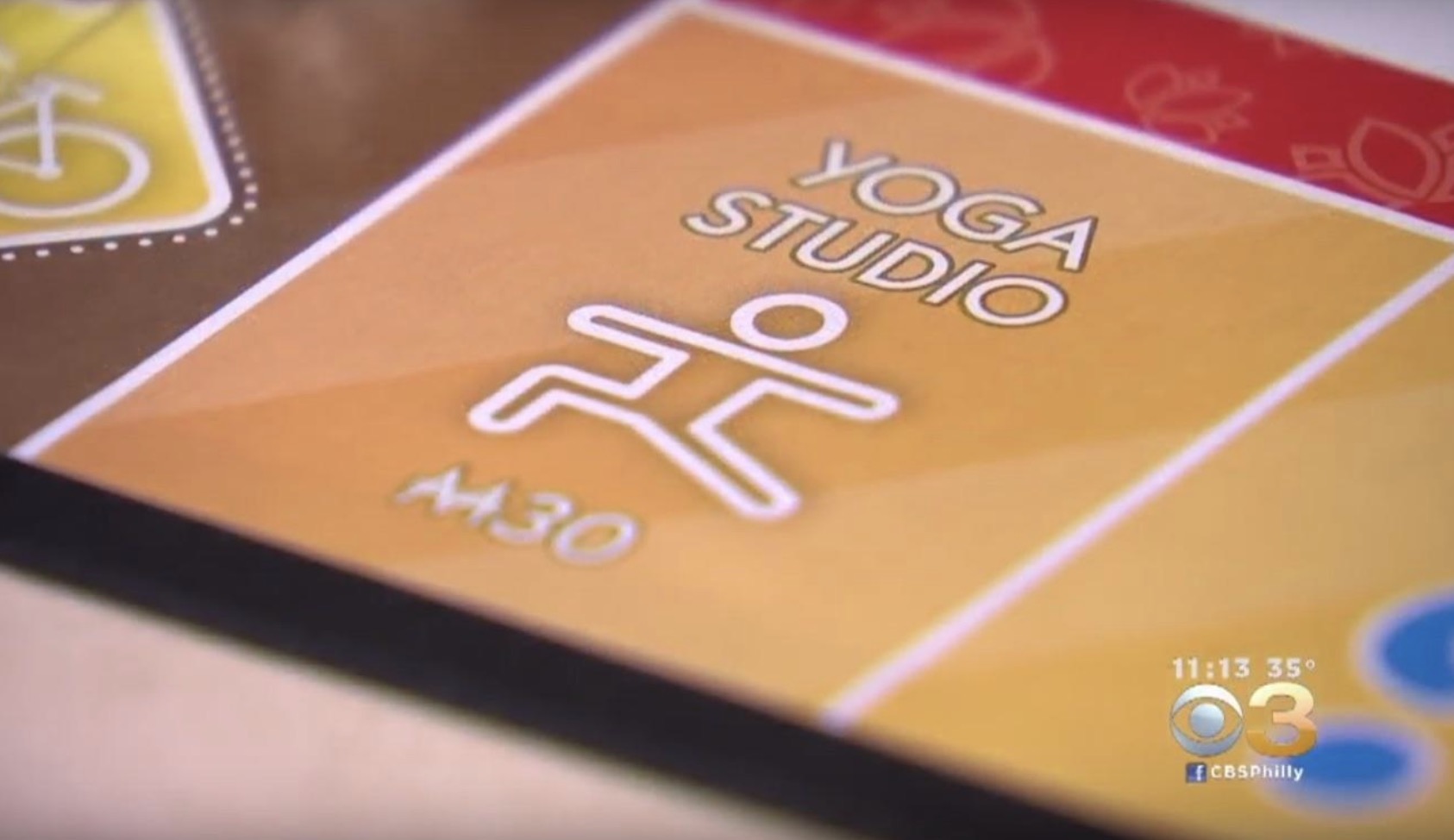 Instead of buying property, players now buy “experiences,” and you win when you get the most. Replacing the low-rent Mediterranean and Baltic Avenues are the undesirable “Parents’ Basement” and “Friend’s Couch.” Instead of the pricey Boardwalk and Park Place, Millennials can land on “3 Day Music Festival” or “Weeklong Meditation Retreat.” Gone are the big four railroads, replaced with “Bike Sharing” spaces. 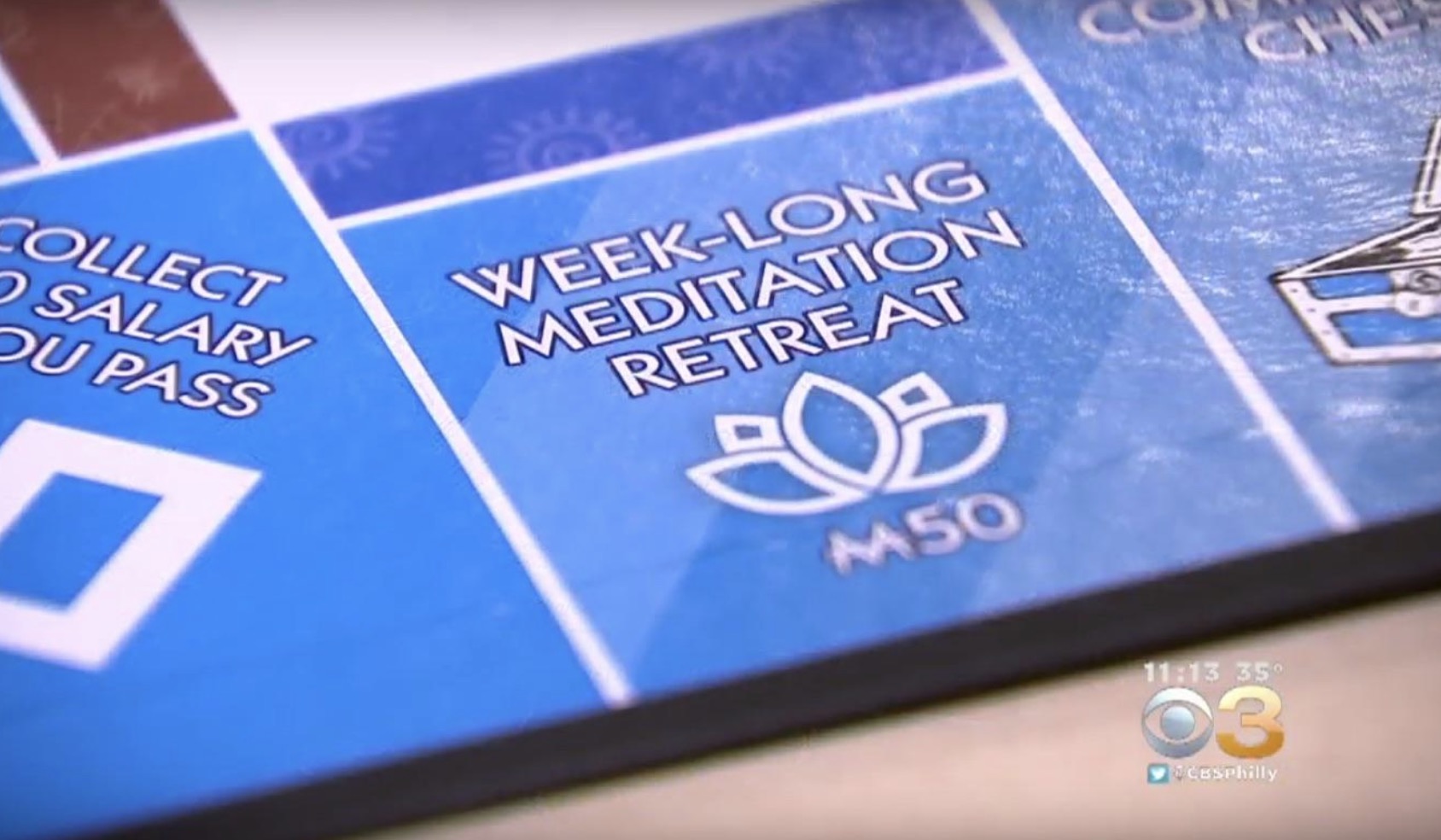 Millennial Monopoly also includes brand new player tokens. Instead of a Scottie dog or a battleship, here’s what you get:

So, from left to right there’s:

-a bike, because only millennials ride bikes.

-a…camera? Shouldn’t it be a smart phone? Who uses actual cameras any more?

-Some sort of top-hatted thing

-sunglasses, because only millennials wear sunglasses

-and finally, a laughing emoji, which is…a bit cocky on Hasbro’s part. 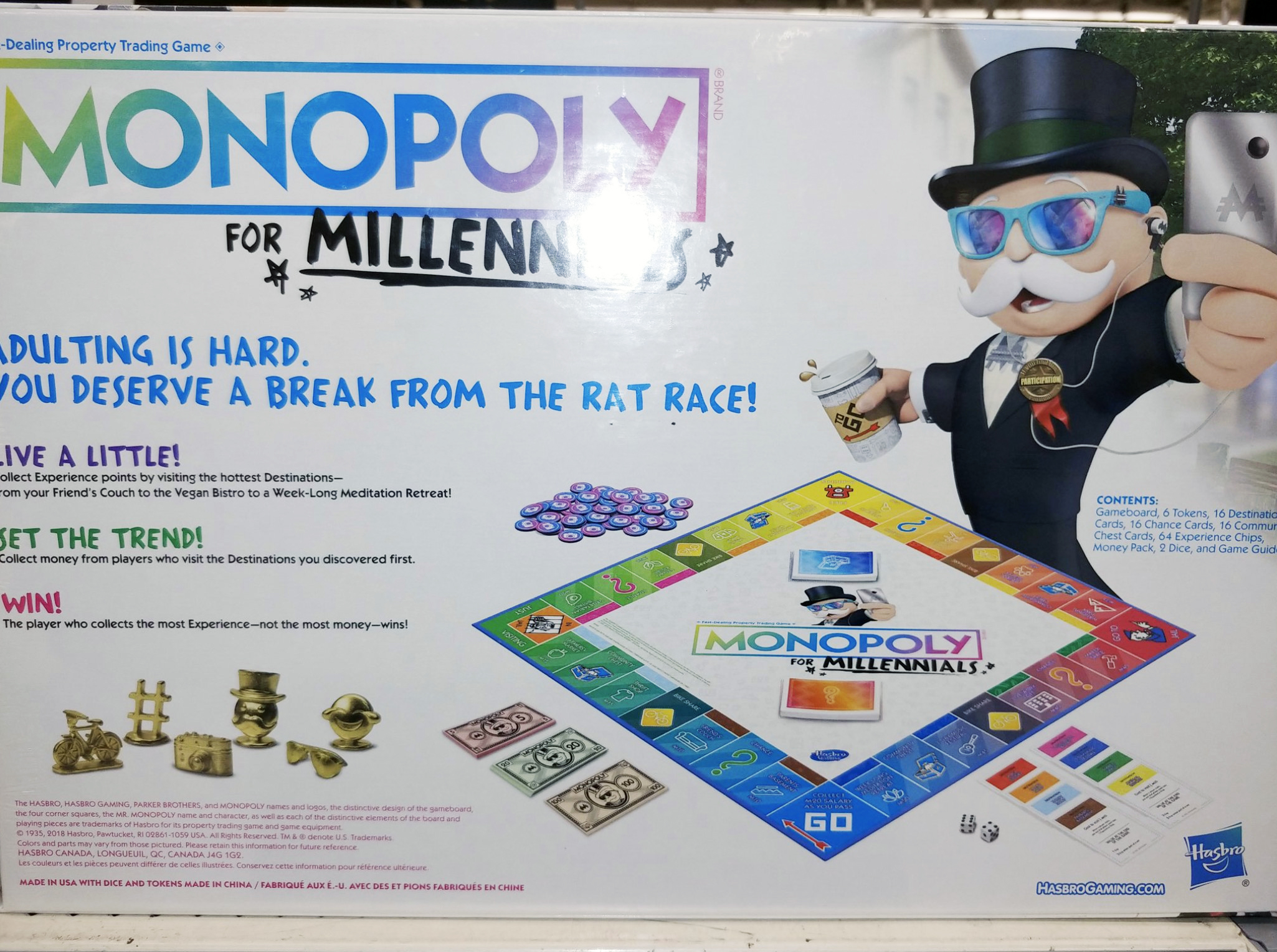 The weirdest thing, to me, isn’t what they changed, it’s what they kept the same. There’s still Chance and Community Chest. Couldn’t they come up with millennial versions of those? How about “LOL So Random” and “Kickstarter”? There’s still “Jail.” Why not “Student Loan Debt” or “Low Credit Rating”?

But above all, the problem is the game’s message. While the 1935 Monopoly might be deservedly criticized for glamorizing the relentless pursuit of wealth, at least it encouraged people to try to be successful. Millennial Monopoly tells you to literally just give up on your aspirations, because you won’t achieve them anyway. Yay. 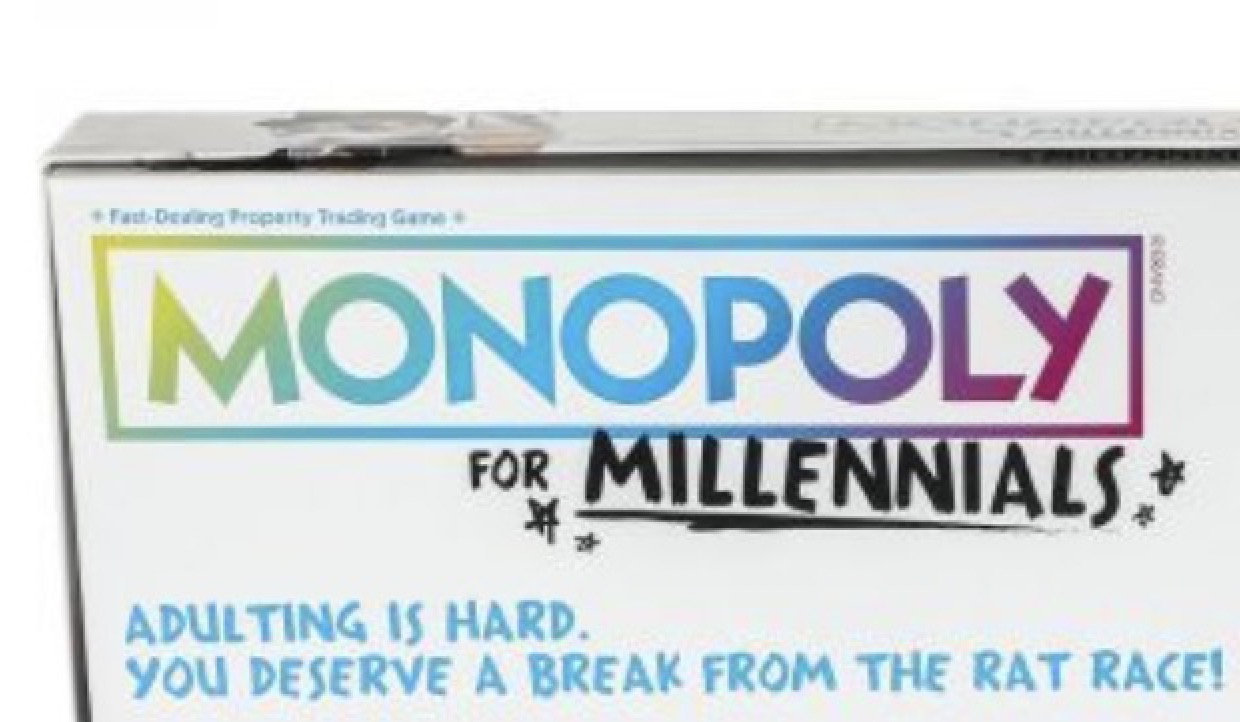 And how do you think millennials reacted to a game that’s both hacky and unfunny and openly contemptuous of them? Not well! People across social media gave the game a well-deserved dragging. 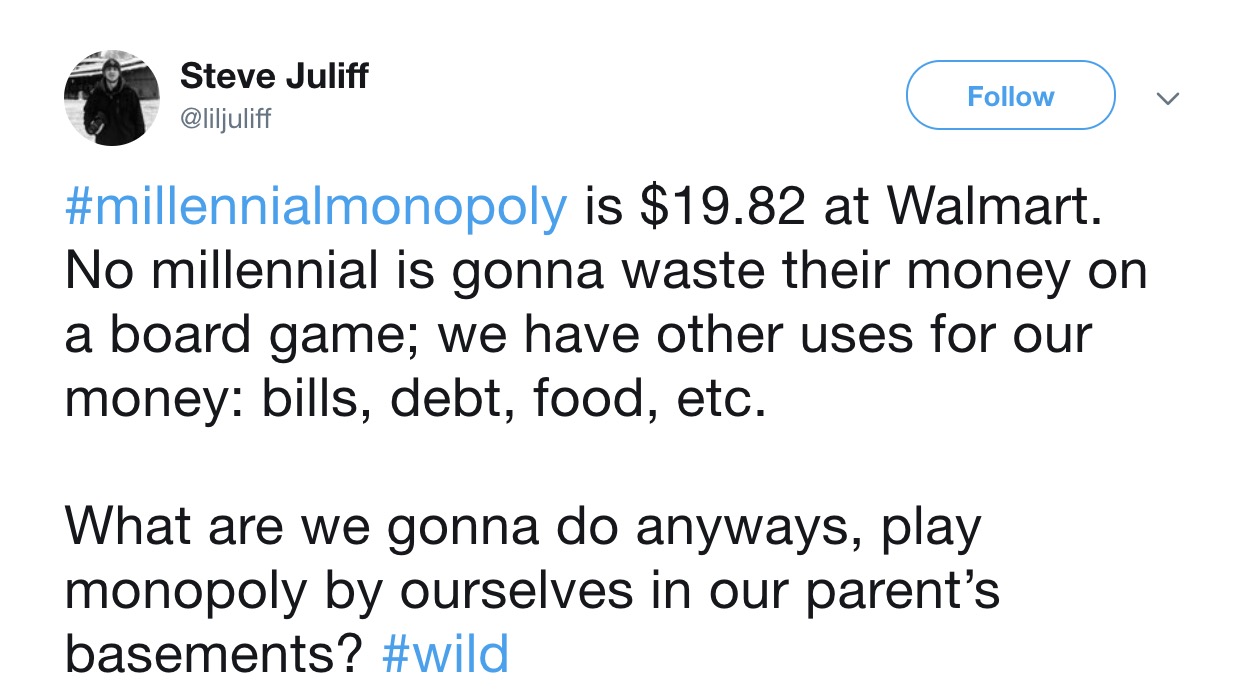 So great job, Hasbro. You managed to ruin a beloved bored game AND make an entire generation angry.

In an entirely unrelated note, who wants to invest in my new board game, Vegan Sausage Party?