Meet The Assquatch: A Taxidermy Creation Made From A Deer’s Butt

We’ve all seen a taxidermy deer head on someone’s wall. But have you ever thought about what happens to the rest of the deer? Sure, some of it gets turned into venison, but the remaining skin, fur, and bones would go to waste.

Unless they get turned into an Assquatch, that is. 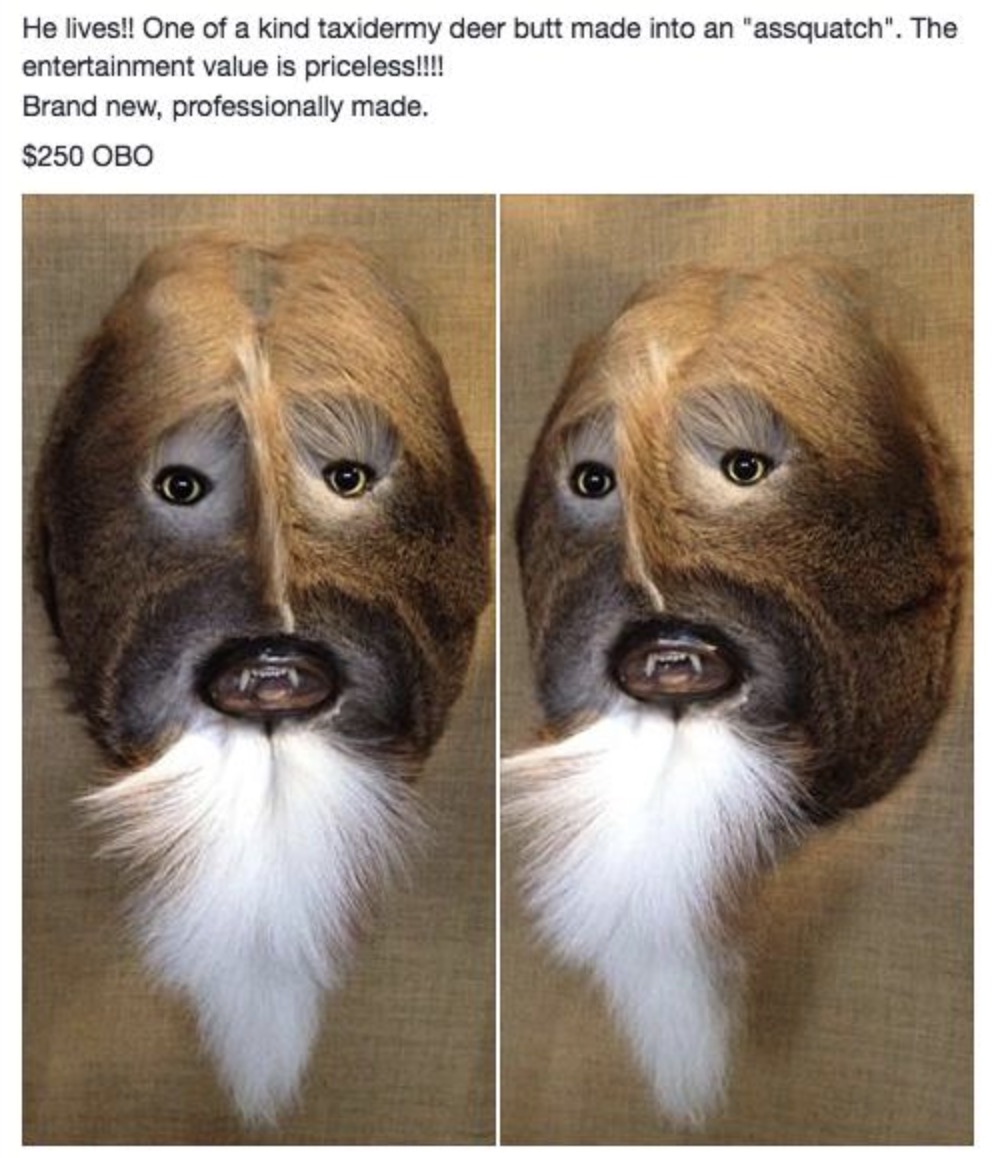 An “Assquatch” is a mounted deer’s butt that’s shaped to look like a face. Much like Sasquatch, the Assquatch is known by many different names. Some refer to them as “Swamp Boogers.” Others call them “Deer Butt Alien Heads.” Also like Sasquatch, the Assquatch can be elusive. They’re not often seen in people’s homes; they’re typically found at tattoo parlors or dive bars, where they serve as quirky conversation pieces. If you wanted to buy an Assquatch, you’d have to scour Craigslist and eBay, and be willing to pay a couple hundred bucks.

Assquatches come in all shapes and sizes, and there’s no standard form they have to take. They don’t even have to be made from deer parts. The only qualification is that it has to be a monster face, made from an animal’s butt.

Here’s an Assquatch made from the hindquarters of an Angora goat: 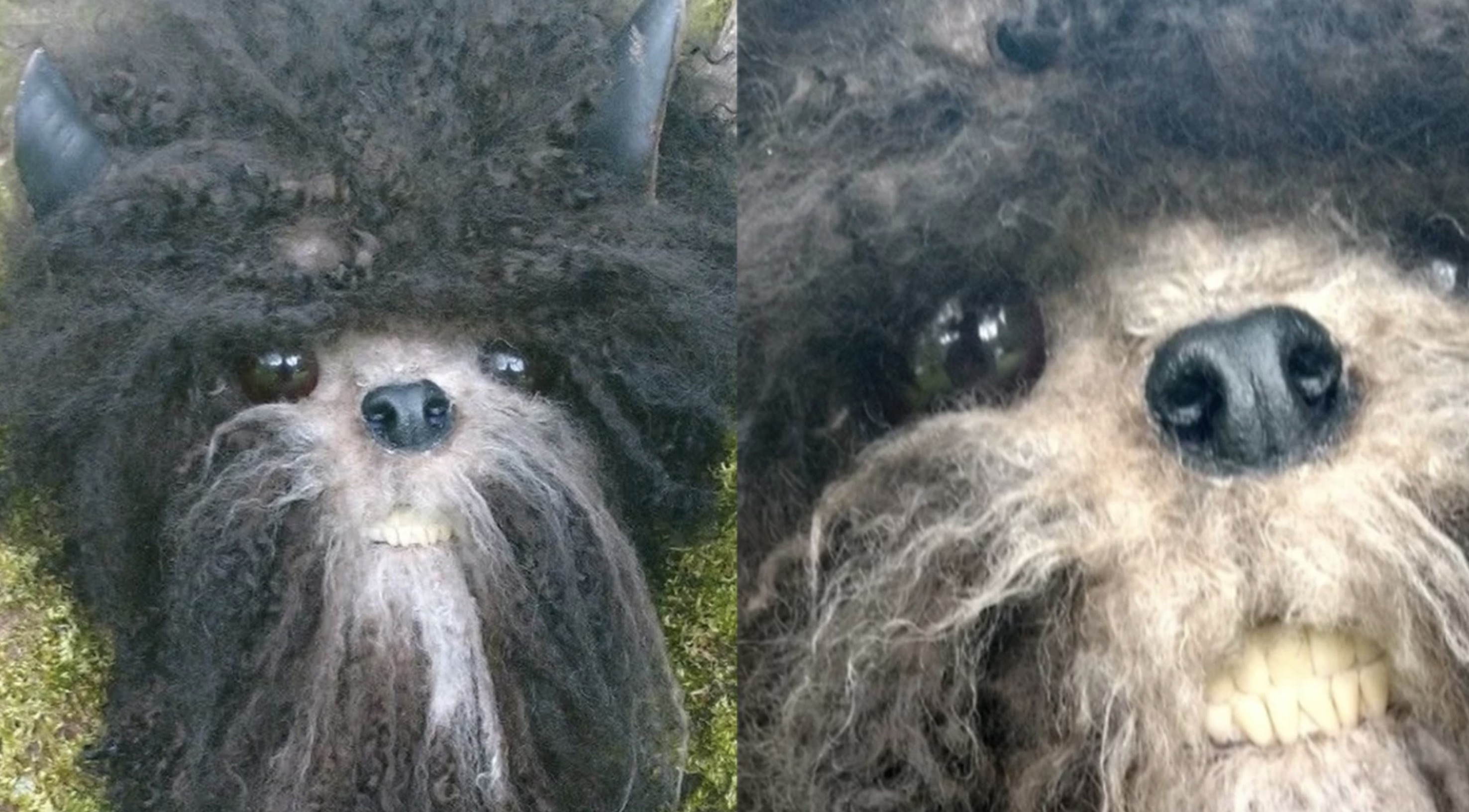 Assquatches belong to a taxidermy style called “gaff taxidermy.” That’s where taxidermists use real animal parts to make mythical animals. You’ve probably heard of a jackalope, a jackrabbit-antelope hybrid. Or the Fiji mermaid, which was created in 1822 when a bunch of sailors sewed a monkey’s body onto a fish tail. (Gotta entertain yourself during those long sea voyages somehow.) Ripley’s Believe It or Not has been featuring them for decades.

Vice recently looked into the world of Assquatches, and they spoke with taxidermist Rob Biracree, who runs Black Bears on Bath Salts. He explains that taxidermists create Assquatches and other gaff taxidermy pieces as a way to test their skills:

“Taxidermists, as a rule, hate to see parts of an animal go to waste. The front halves of deer are in high demand, but the junk in their trunks would routinely go to the dump if there wasn’t a creative outlet for them. I don’t know what visionary taxidermist invented the swamp booger; probably, like the creator of the first jackalope, they’ll be nameless but often-imitated.” 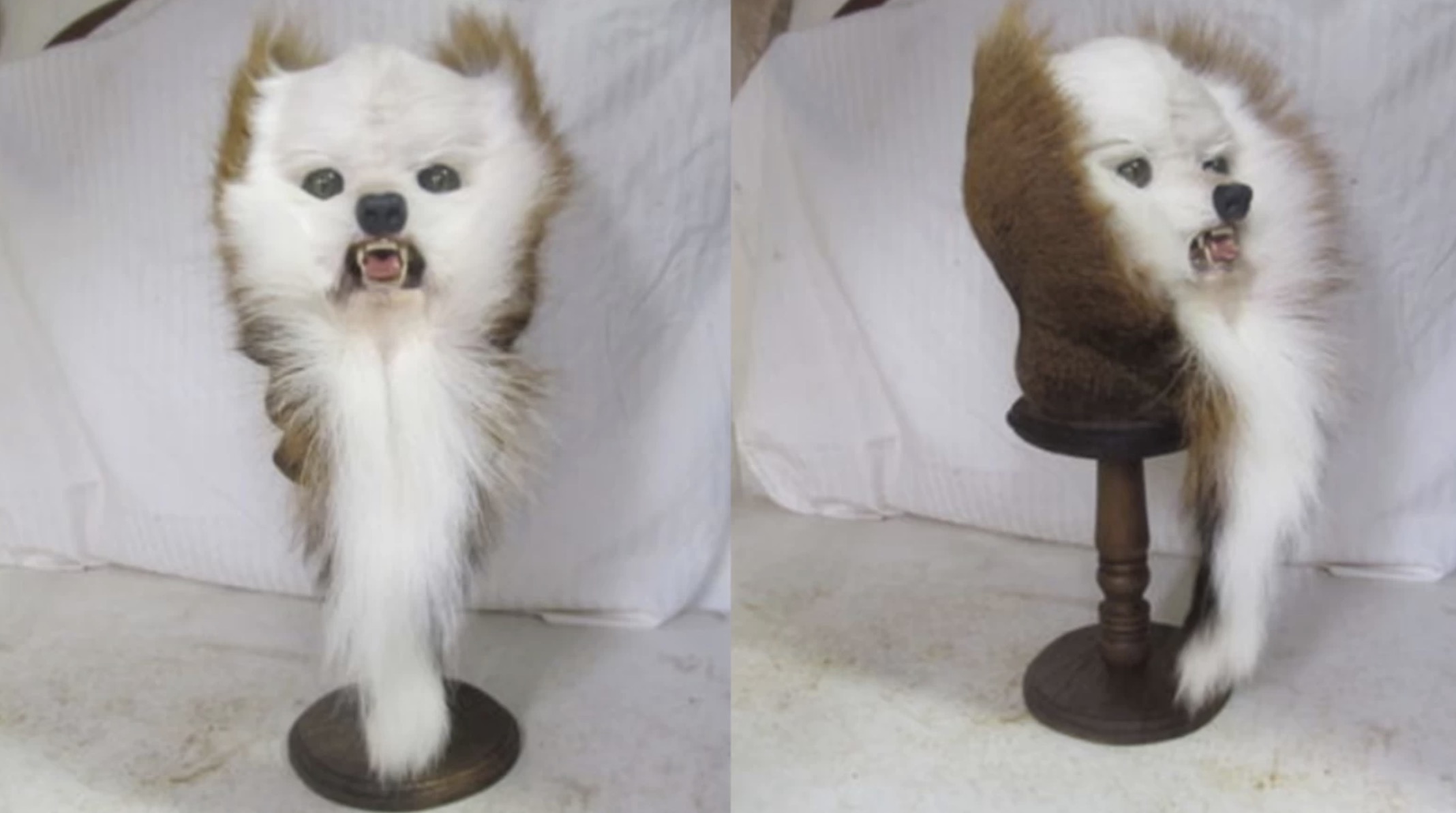 Like many works of art, an Assquatch looks simple to make. In reality, it’s anything but. (Butt?) Another Assquatch expert, Don Burleson, wrote comprehensive how-to guide on Assquatch-building back in 2006. (Which he published not on a personal blog, but on the website for his tech support business. Somehow that feels appropriate.)

Burleson, an Assquatch purist, recommends you start with a fresh deer carcass. Then you’ll need a styrofoam mannequin head, a sharp knife, and some glue.

Before you start skinning the deer, though, Burleson stresses the important of proper deer anus preparation, lest the deer’s innards spill out and ruin your Assquatch. 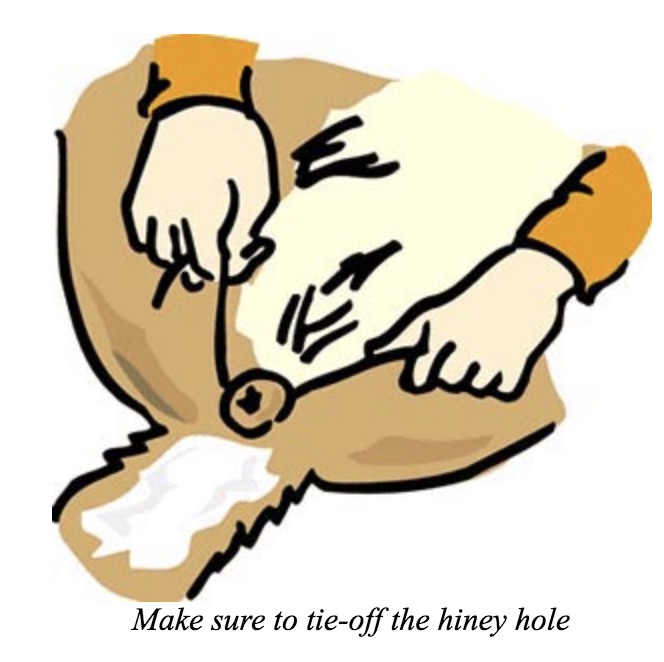 However, that’s just the beginning of deer butthole preparation. In most standard Assquatches, the deer’s anus will serve as the mouth. Unless you want your Assquatch to look like it just bit into a lemon, you’ll have to do some shaping and stretching.

Expect this part to be difficult! Stretching a deer’s b-hole into a smile or a frown is a skill possessed only by master Assquatch artisans. Or as Burleson puts it, “Many people say that the real red neck art is the shaping of the deer anus to look like a mouth. This is the true test of the artist’s loving hand.”

Once you’ve shaped the deer’s orifice into an acceptable mouth, you’ll need to add the eyes and any other features you desire, and then shape your mannequin head into a more realistic form.

Finally, it’s time for mounting. In these three photos you can see the deer’s rear transform into a majestic Assquatch:

But there’s a new wave of Assquatch-makers who don’t appreciate the craft of making Assquatches by hand. Some companies will sell you a pre-made heads, made from imitation chimpanzee skulls, wolf snouts, and reptile eyes–basically doing all the work for you.

This is why, Biracree explains, so many modern Assquatches all look the same. 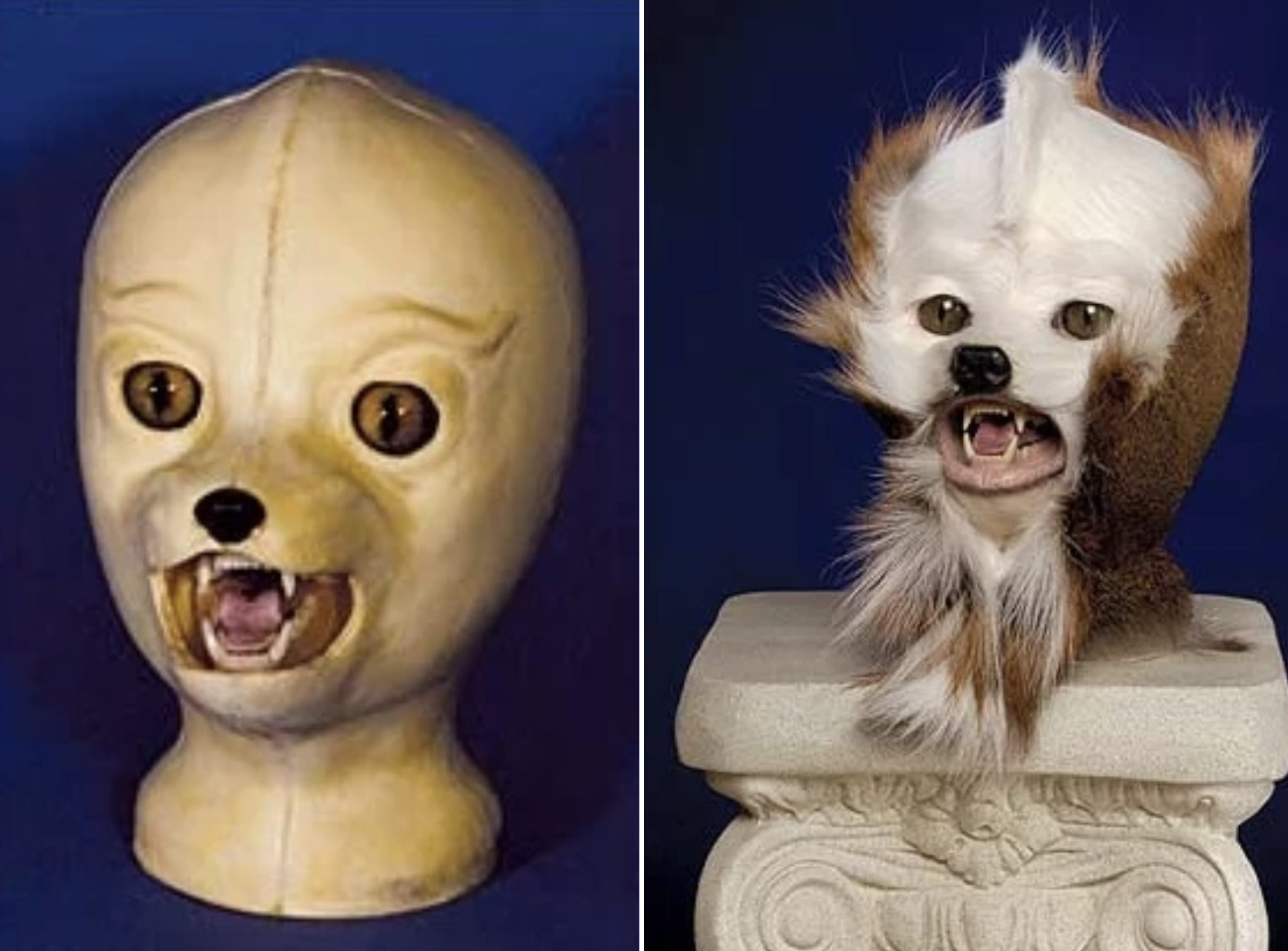 The Assquatch community is divided, and may very well tear itself apart. What’s needed is a visionary, someone who can rise up and lead these warring Asquatch factions.

We need a unifier. We need a Da Vinci of Deer Assholes.

20 Tweeters Share Their Hilarious Worst Summer Jobs
15 Funny Pub Signs That Are Getting the Drinkers Inside the Door
15 Poor Souls Who Are Having Really Bad Days
16 People Share Their Most Unexpected & Awkward Celebrity Encounters
Teachers Share Their Secrets They’d Never Tell Their Students
20 Tweets That Nerds Will Find Funny
We use cookies to offer you a better experience, analyze traffic, personalize content, and serve ads. Learn more