As we all learn in elementary school, the police are to be called only in the event of an emergency. They’re not supposed to be called to mediate the disputes that you’re too petty and immature to resolve yourself. In other words, you shouldn’t call the cops just because someone is being a jerk.

Unfortunately, two Kansans apparently skipped that day in school. And in response, their local police department deservedly roasted them for it.

The Kansas police department in question is the always hilarious Lawrence PD. We recently covered their social media prowess, and we even mentioned this incident, but it’s so good that it deserves an article all of its own. Buck up and get ready to roll your eyes! 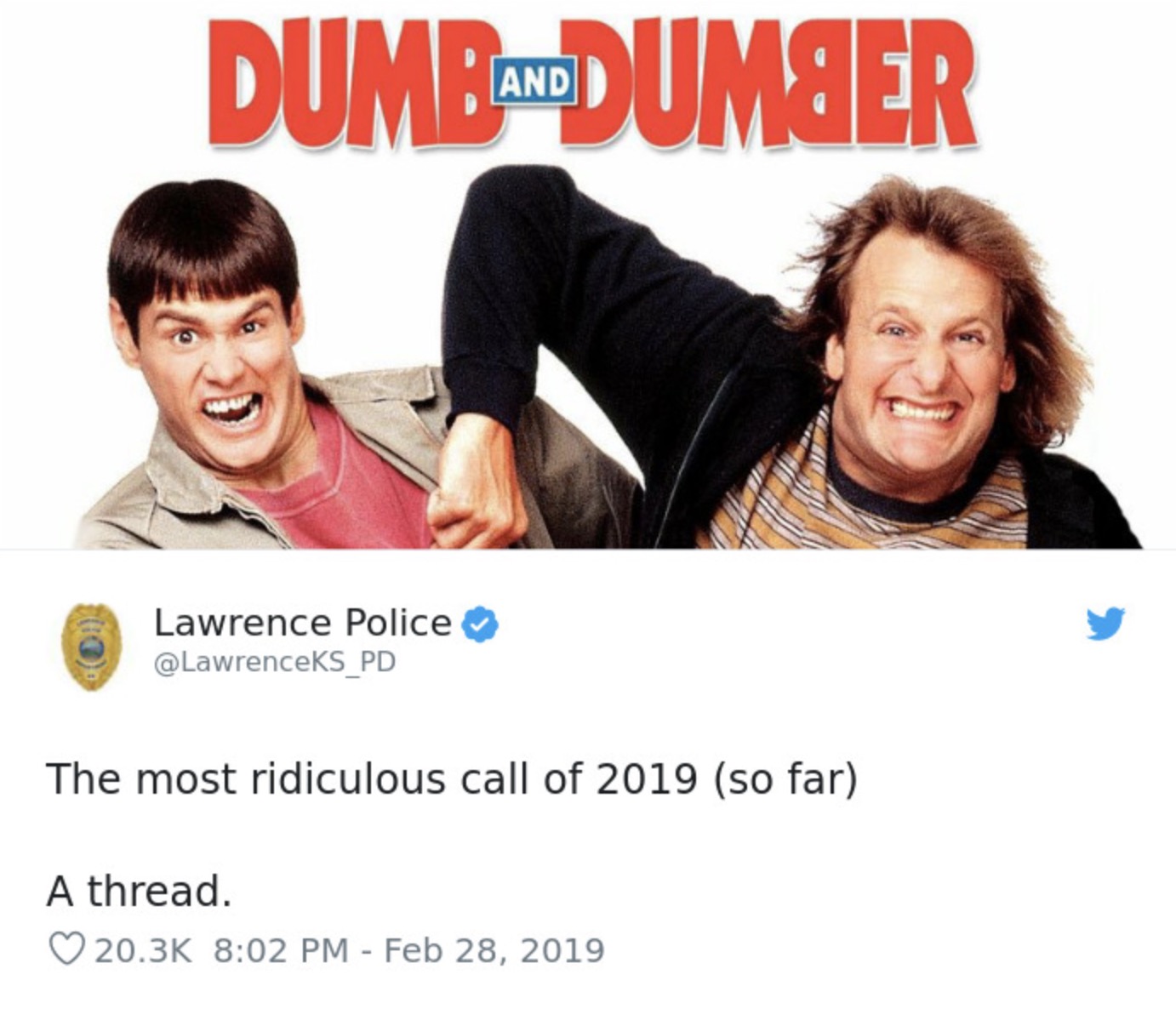 If you’re gonna invoke Harry and Lloyd, the patron saints of stupidity, you better be able to back it up. Lawrence PD quickly followed up to specify that the call concerned a “road rage” incident.

The dispute involved two drivers in a parking lot named “Karen” and “Chad” (not their real names). 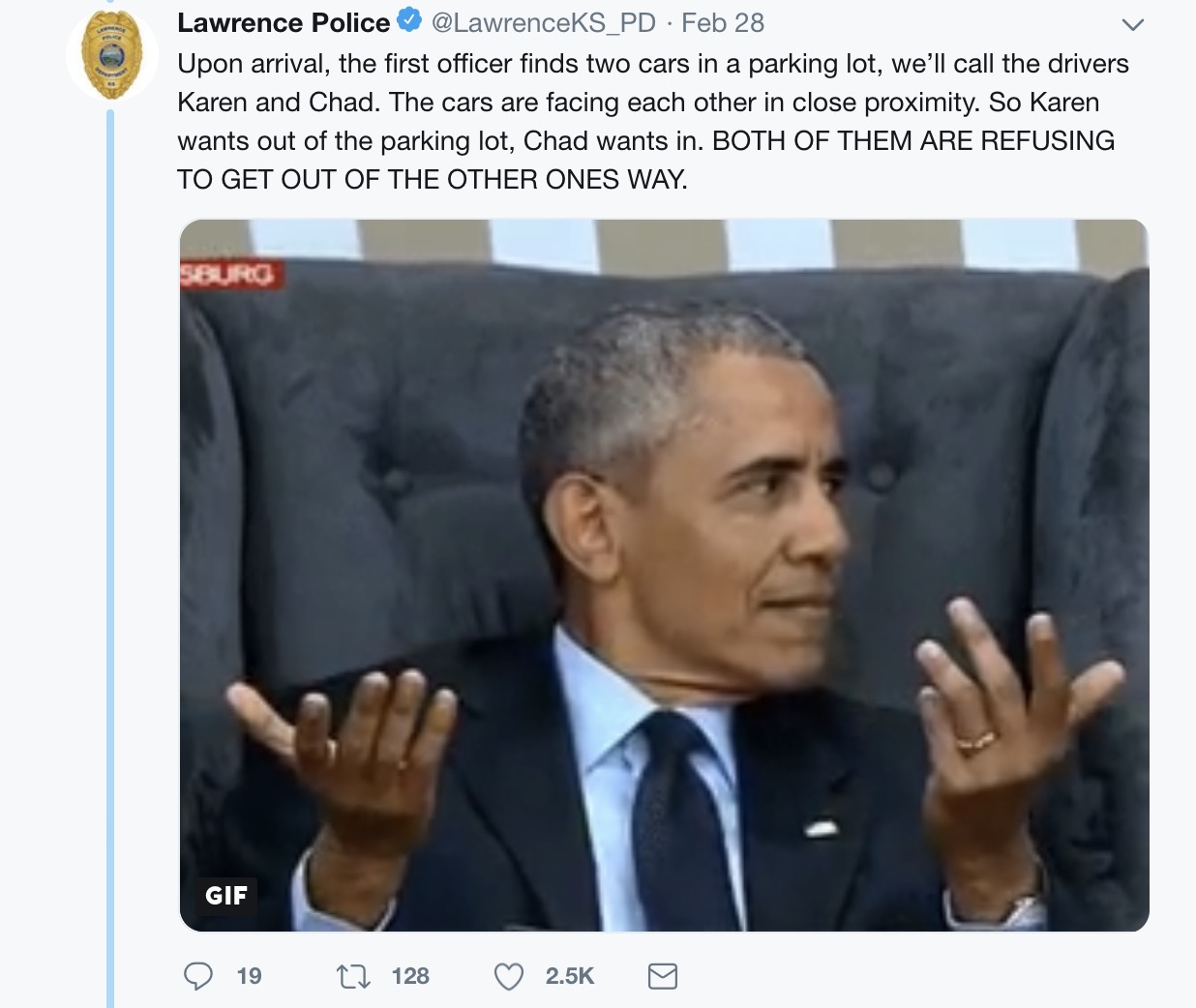 Note that Chad and Karen weren’t even fighting over a parking space. One of them didn’t even need the space. They were just fighting over who should back up their car first. So it’s like that one Seinfeld episode, but even dumber and pettier. It takes a lot to make George Costanza look like a sane person, but Chad and Karen did it!

A reasonable time to spend fighting over who should back up would be exactly zero minutes. But again, Chad and Karen aren’t reasonable. 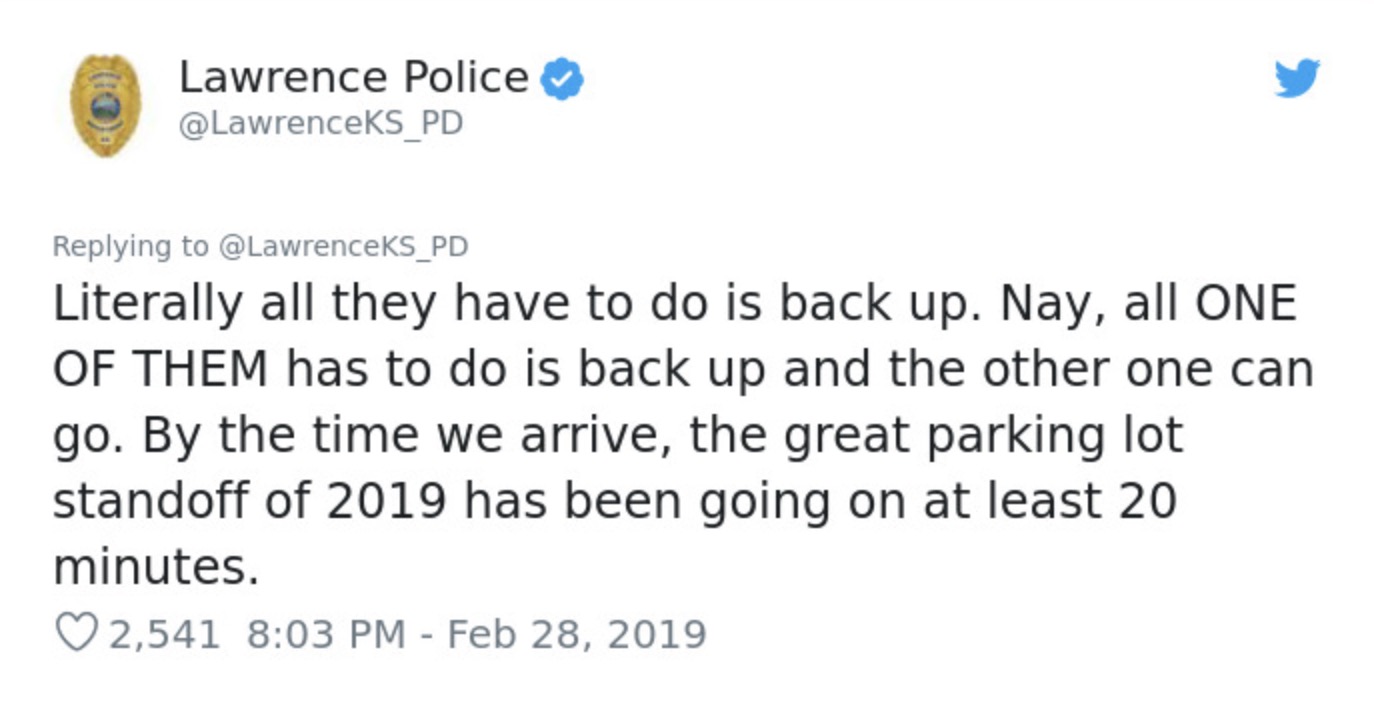 The police officers started with Chad, but he’d already dug in his heels. 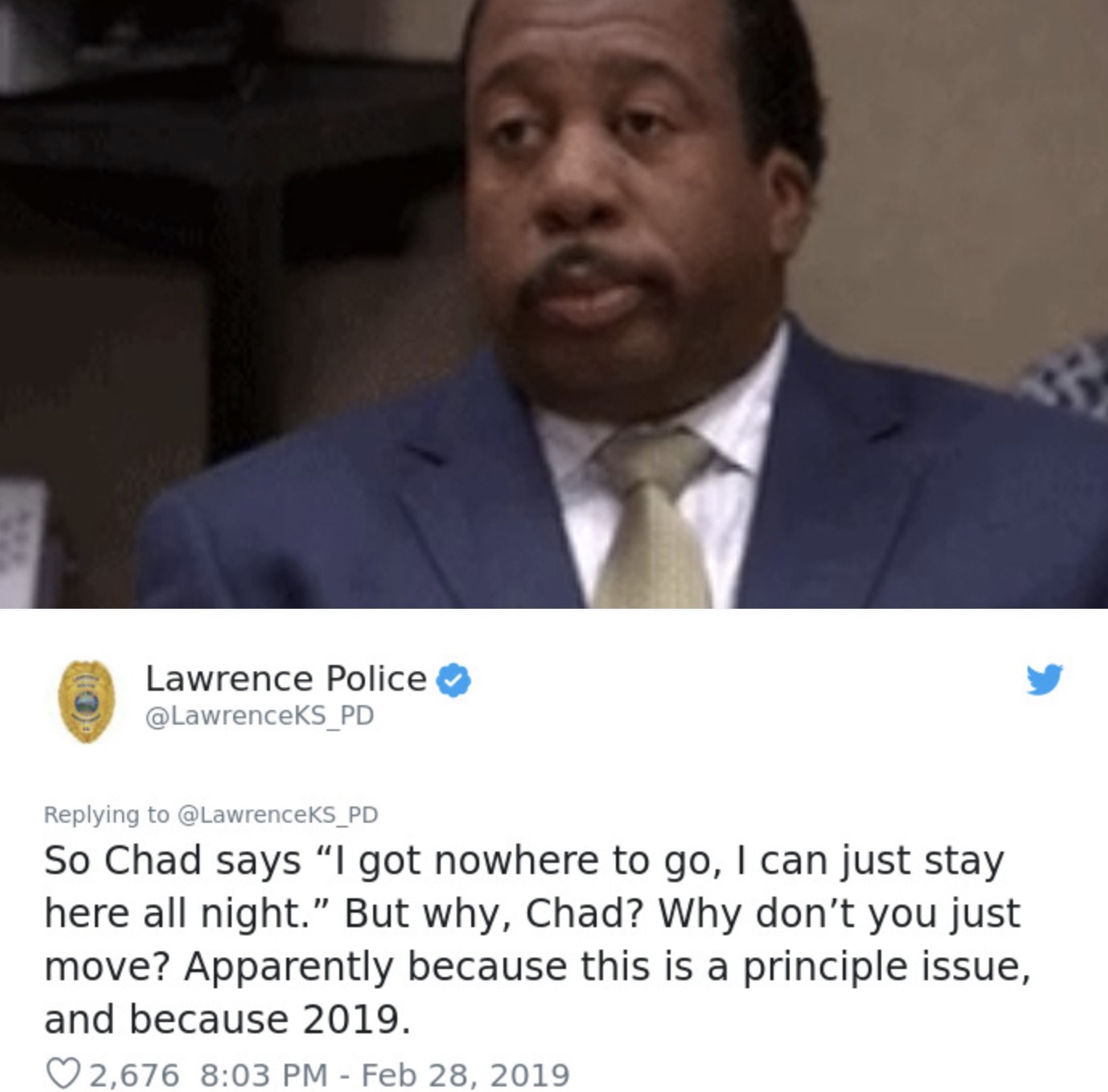 Then it was Karen’s turn to be stubborn. 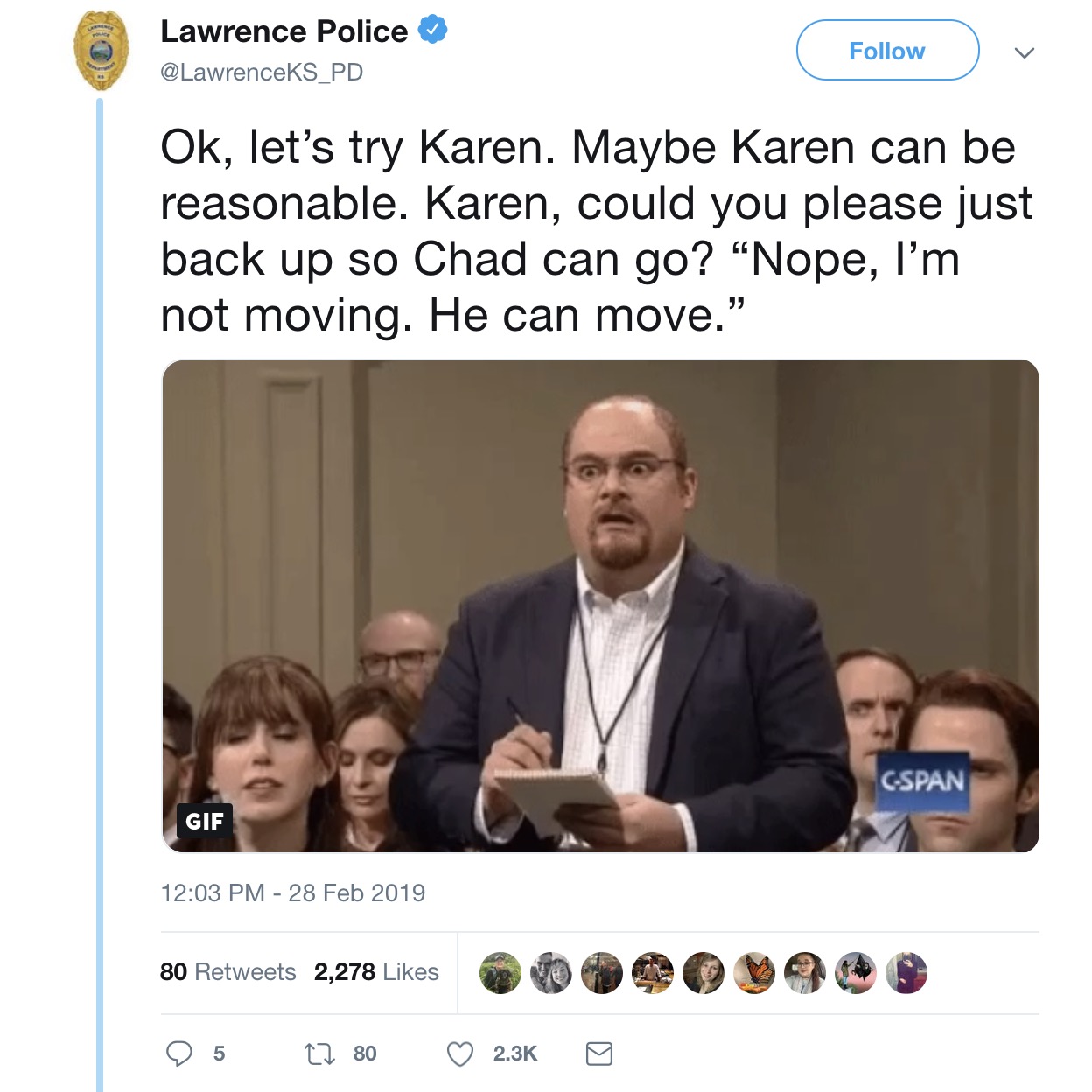 Karen tried to explain that she had a legitimate reason for backing up, but the cops weren’t buying it. 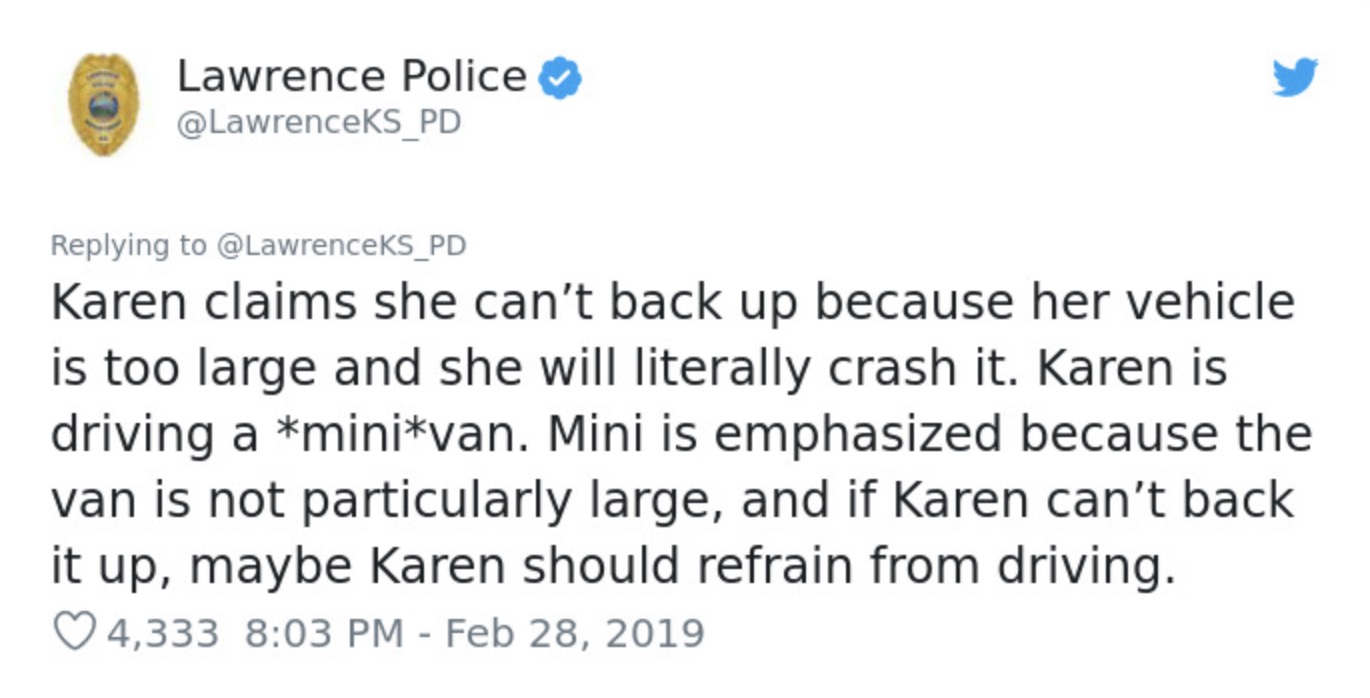 The cops then did the equivalent of bringing in their supervisor…unfortunately, the supervisor had way better things to do. (And hey, props to the Lawrence PD for poking a little fun at themselves!) 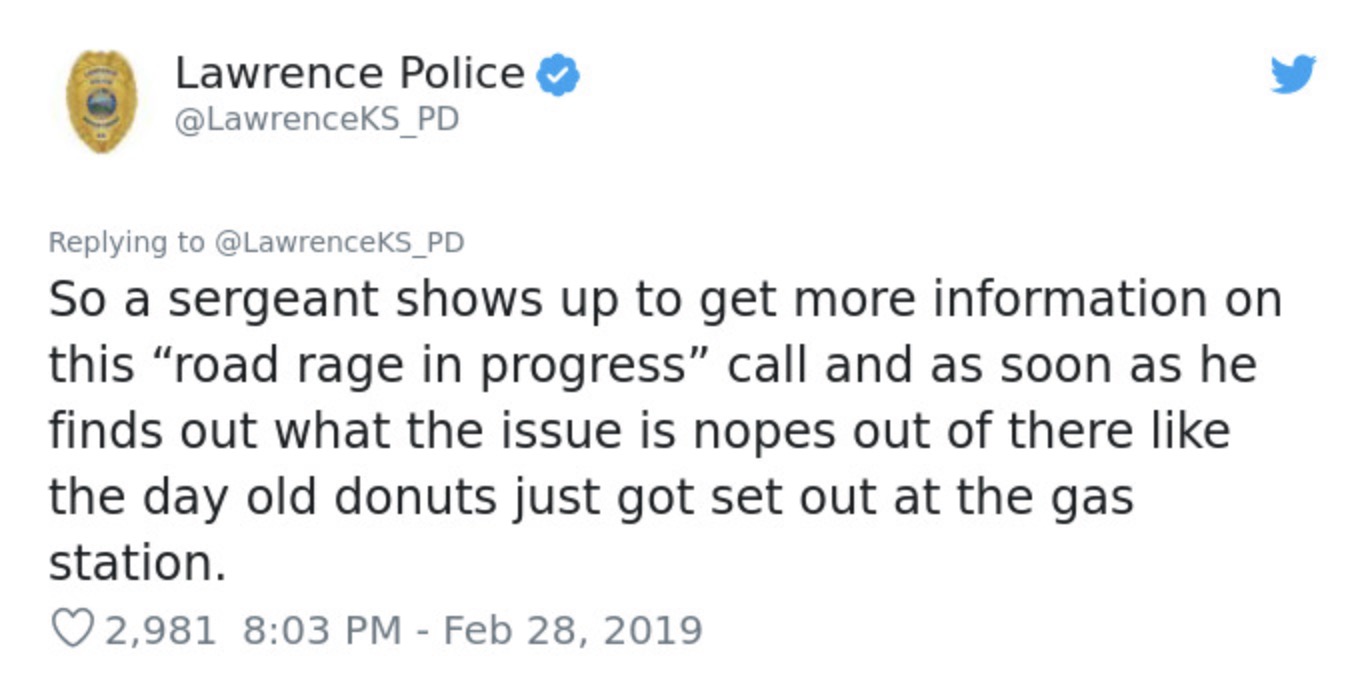 Even when being confronted with the fact that he was being an ass, Chad refused to budge. 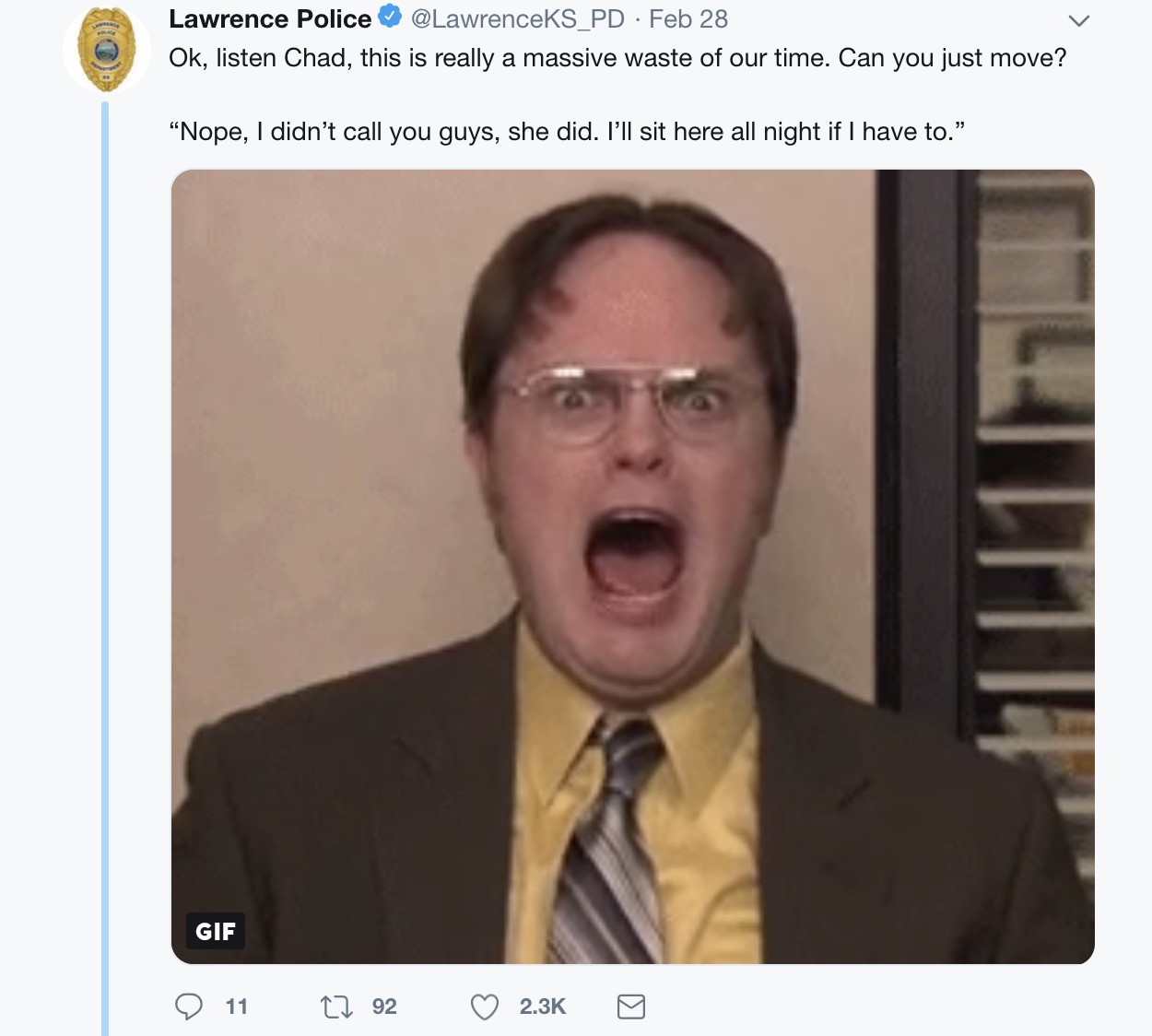 They tried again with Karen. Here’s her response, just in case you were starting to take her side. 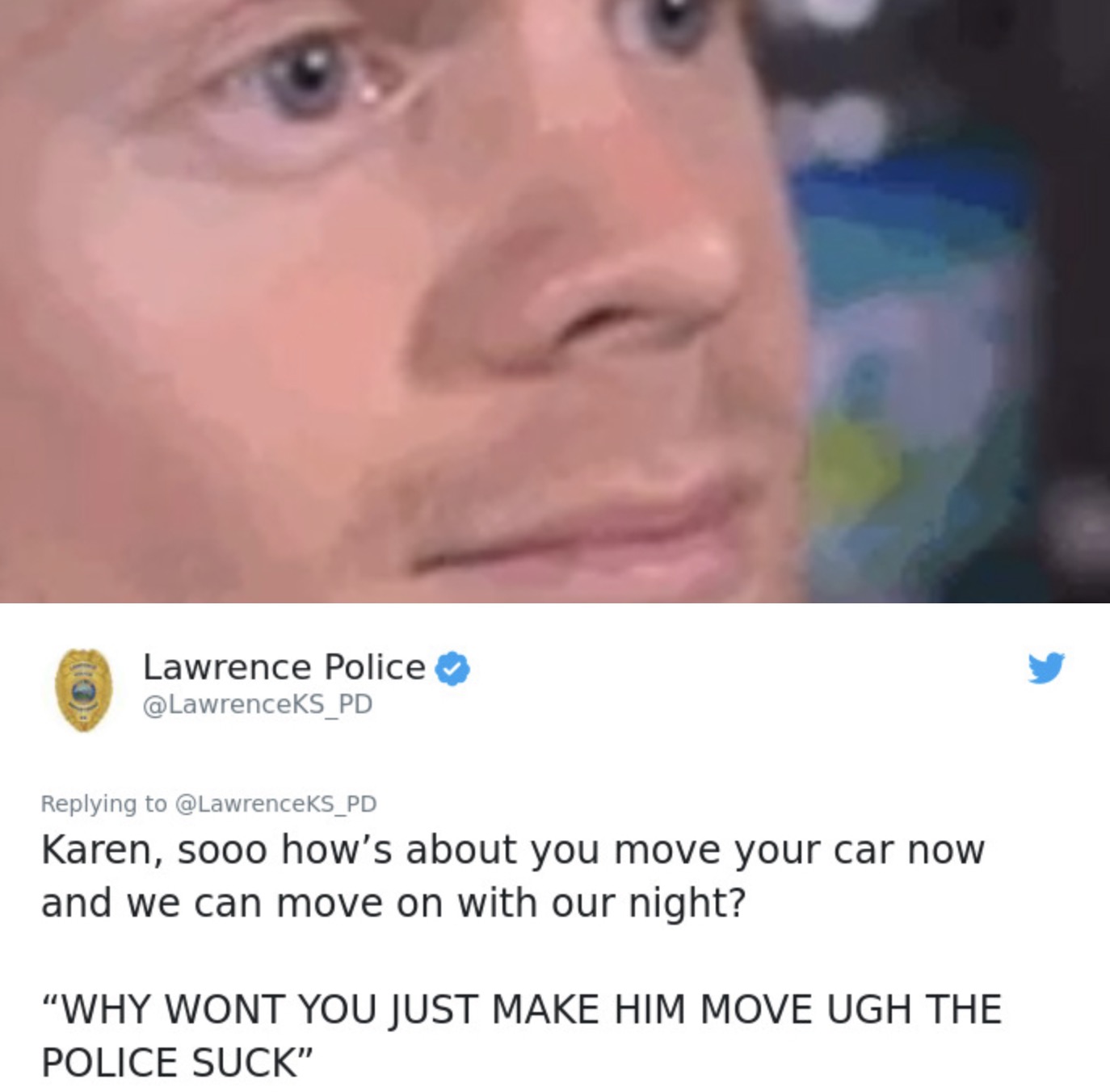 To me, the craziest part of the story is that one of these two drivers had already finished their shopping and was preparing to leave the parking lot. Who in the hell would voluntarily stay in a busy parking lot for one second longer than they have to? That’s weapons-grade spite.

Maybe that’s why the police decided the best move was to just give up. 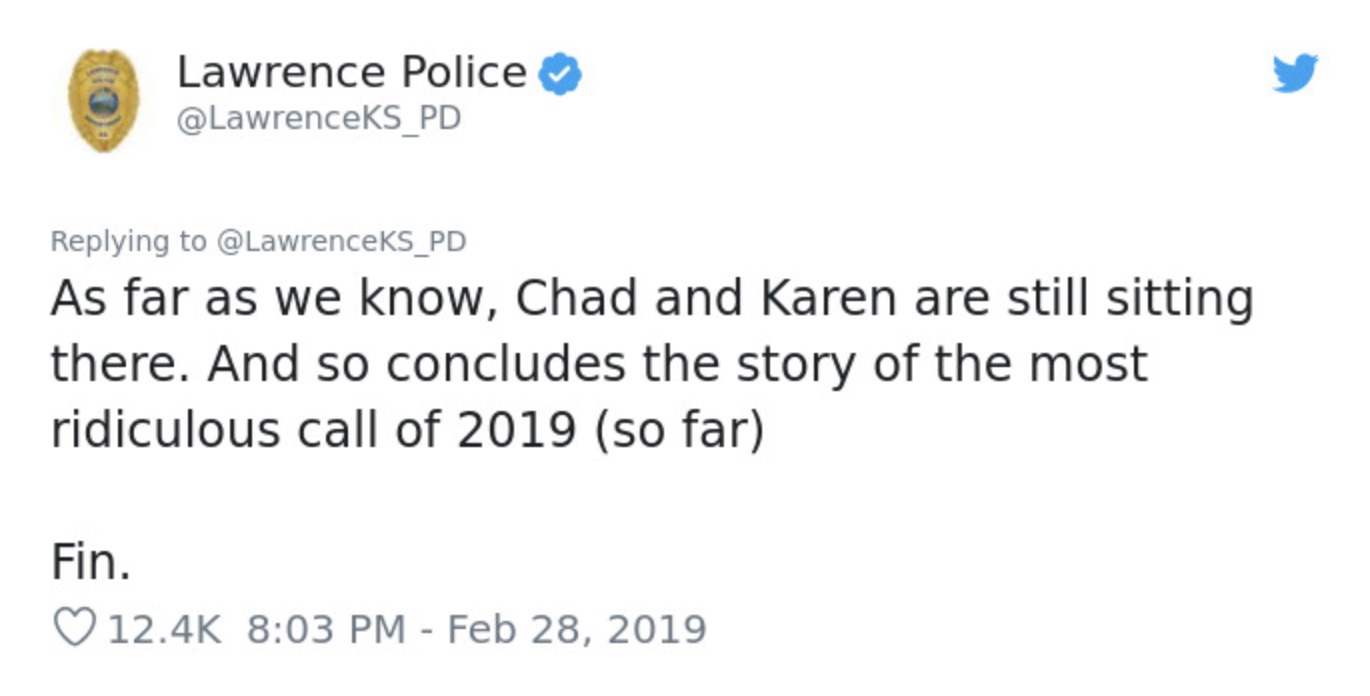 Days later, the Lawrence PD returned to the parking lot and confirmed that Chad and Karen were gone.

And that’s the end of the story. We don’t know whether Karen or Chad were the first one to cave. It’s possible they both stayed put in their cars ’til they passed out from dehydration and had to be hospitalized.

When reached for comment on this story, the ghost of 19th century German engineer Karl Benz said, “I wish I’d never invented the automobile. What a couple of arschlöchers.”

20 Tweets from Some Very Funny Women
11 Photos That Prove You Have No Idea How Food Grows
15 Hosts Dish on the Weirdest Thing a Guest Ever Did in Their Home
15 Wholesome Things That Happened in the Animal Kingdom This Year
Cat Burritos = Purritos!
This Belgian Guy Keeps Finding Hideously Ugly Houses
We use cookies to offer you a better experience, analyze traffic, personalize content, and serve ads. Learn more