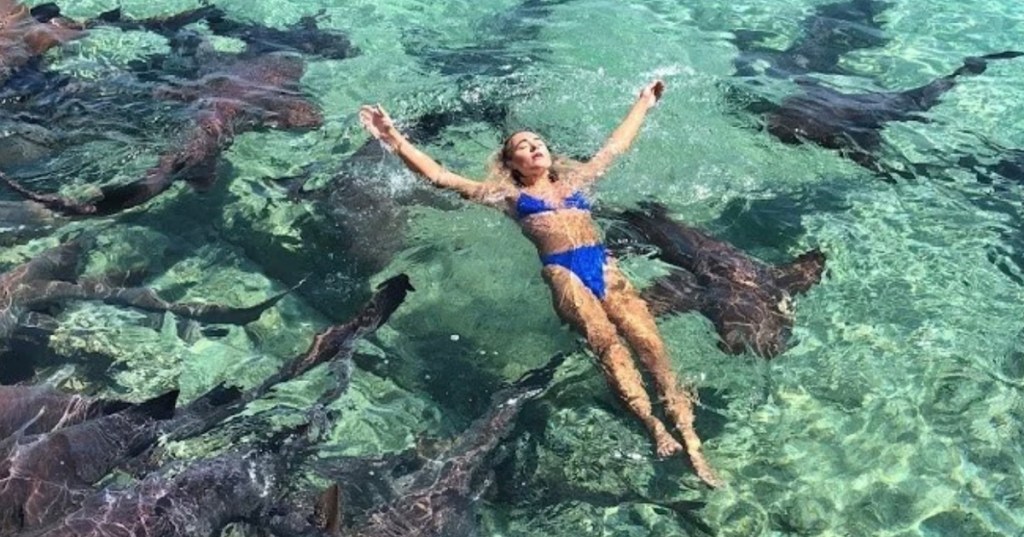 If you’re like me, and you’re deathly afraid of sharks, you should know that our fears are irrational. Sharks rarely bother humans–in 2017, there were only 155 shark attacks worldwide. Meanwhile, there were an estimated 4.5 million dog bites last year in the United States alone.

But just because a shark is unlikely to bite you, it’s still best to keep your distance. Just ask Katarina Zarutskie

She’s an Instagram model and a student at the University of Miami, where she’s studying international business and nursing. About a month ago, Zaturskie vacationed in the Bahamas with her boyfriend and his family. 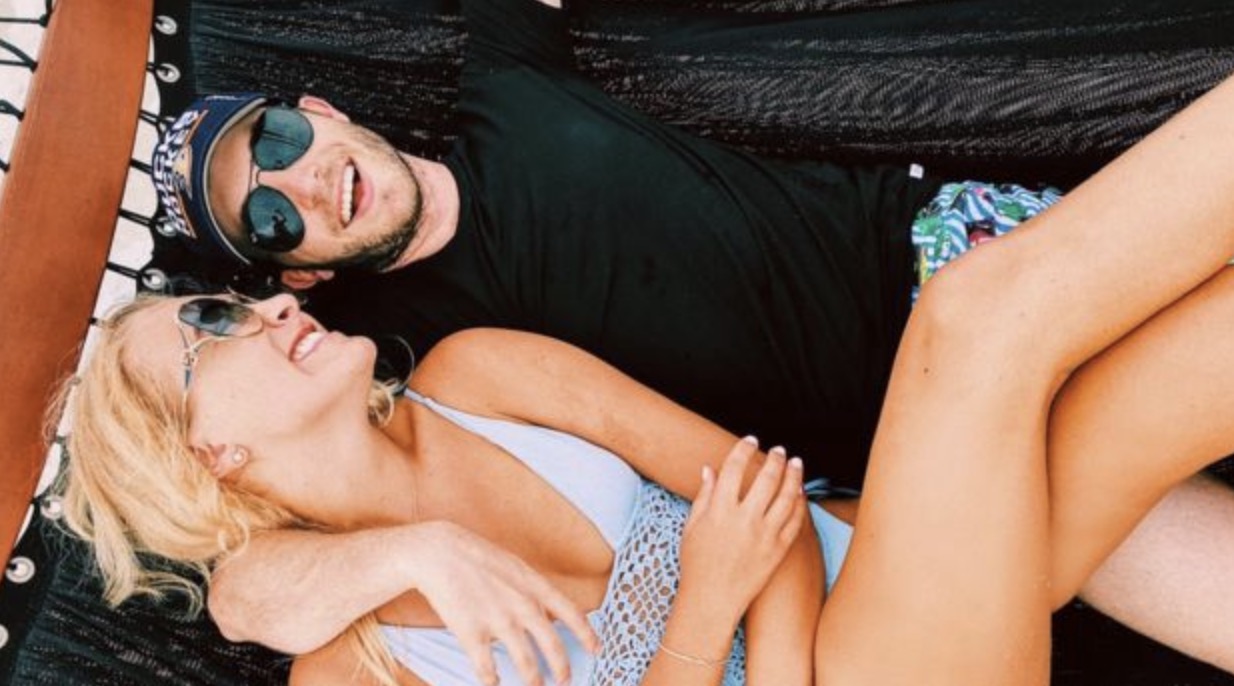 After having lunch on Staniel Cay, an island in the Exuma archipelago, Katarina noticed a group of people swimming and interacting with a school of nurse sharks.

Now, if you’re already going to hang out with a bunch of sharks, nurse sharks are some of the safest. They attack humans even less than other sharks do–there have been only 44 nurse shark attacks in the last few decades, and there has never been a fatal attack on record.

And as a California native who grew up swimming in ocean, Katarina thought she had nothing to worry about. “From my previous knowledge from surfing and scuba diving, I know nurse sharks are usually very safe,” she told the BBC. “I’ve seen countless photos of people with them on Instagram.”

Despite some misgivings from her boyfriend and his family, Katarina decided she wanted a shark photo. So, she got in the water and her boyfriend’s Dad began taking pictures. 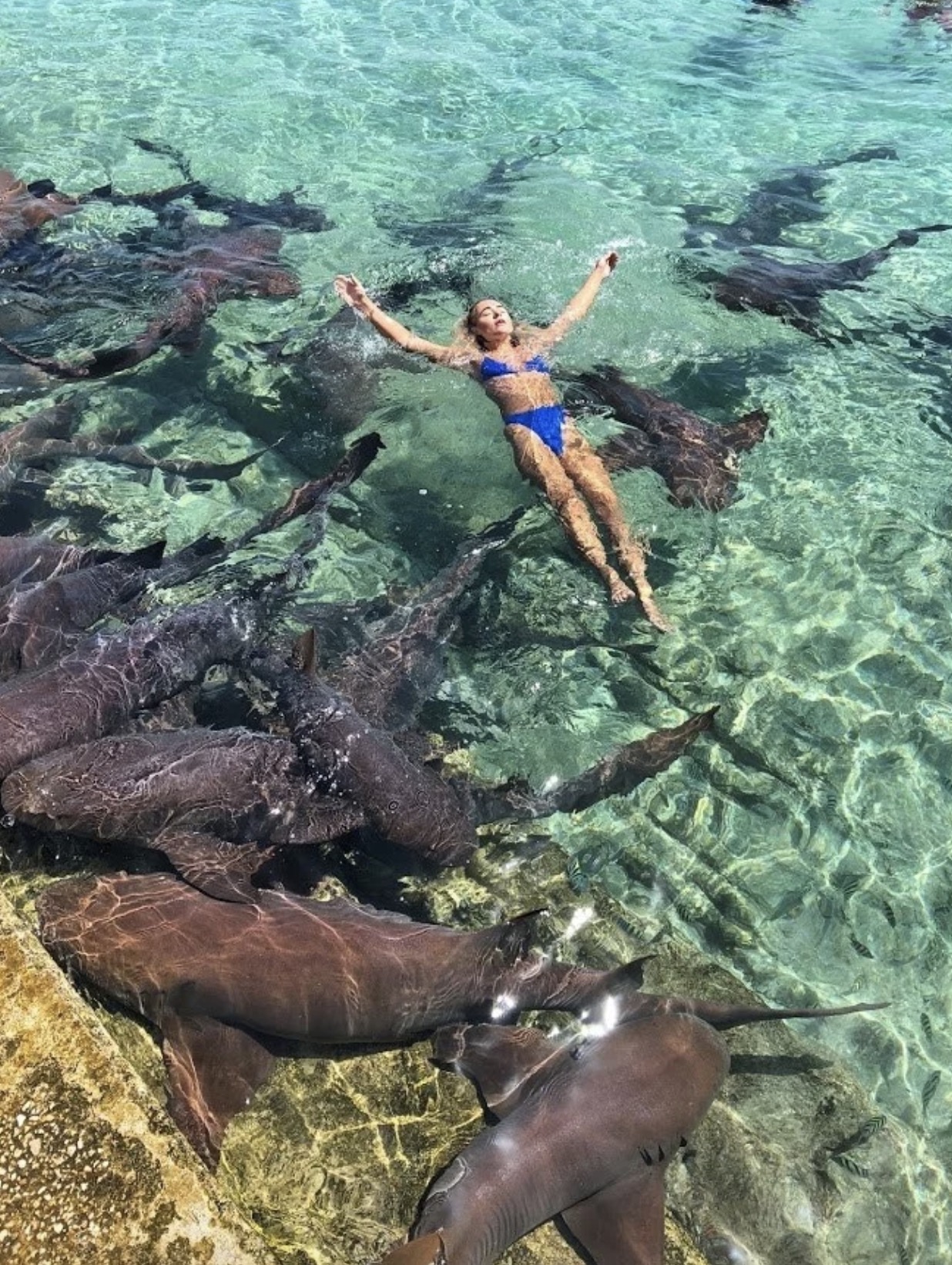 These particular sharks are a tourist attraction in Staniel Cay, and as Katrina posed, people gathered to watch. One local suggested she lie on her back and float while the sharks circled. She did, and that was when she felt a tug on her wrist.

Incredibly, her boyfriend’s Dad caught the exact moment on camera, providing us all with several weeks’ worth of nightmare fuel. 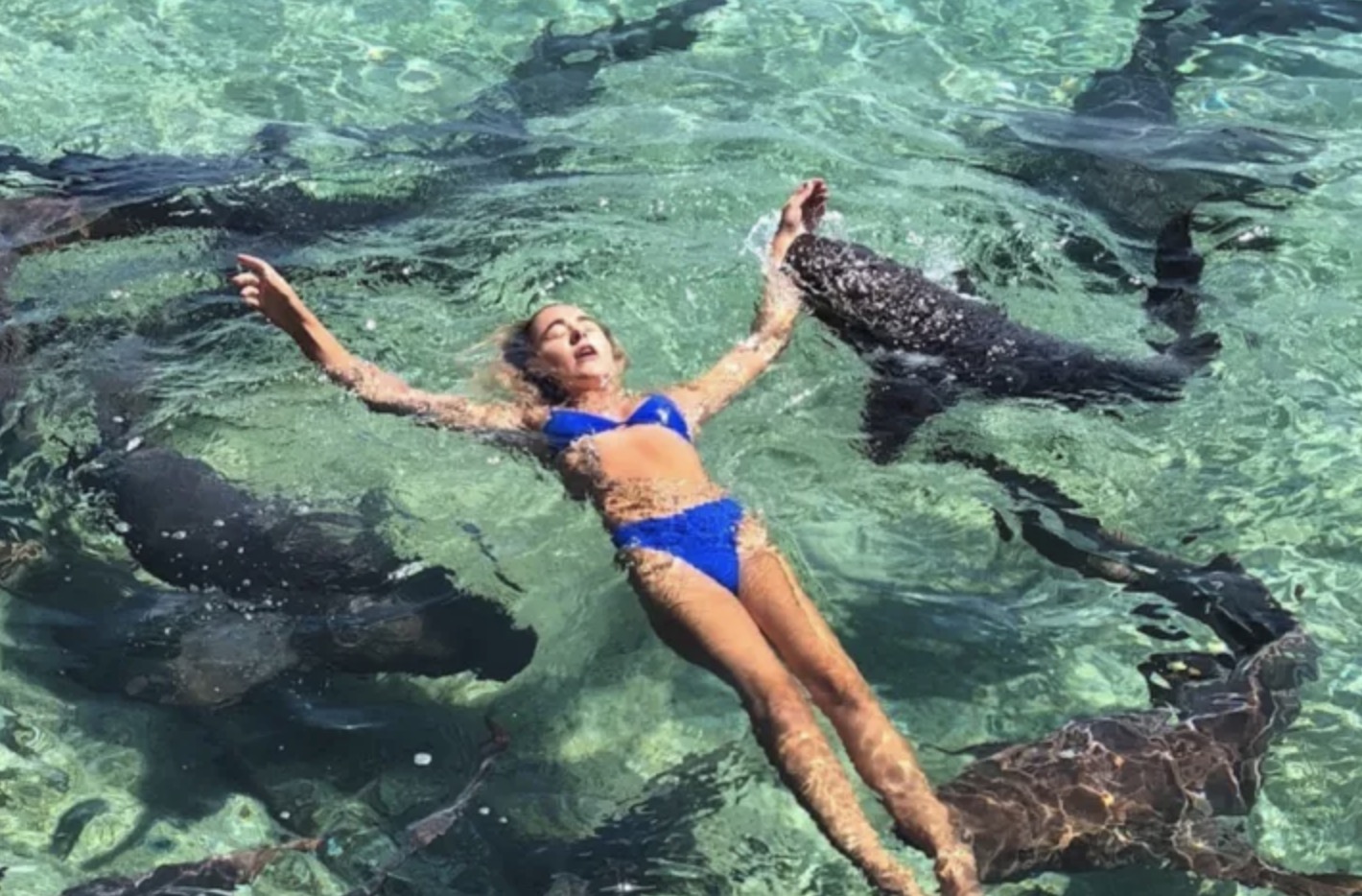 If you need to change your pants, hold off for a sec because we’re not done. As the horrified onlookers watched, the shark dragged her underwater and held her for several seconds. 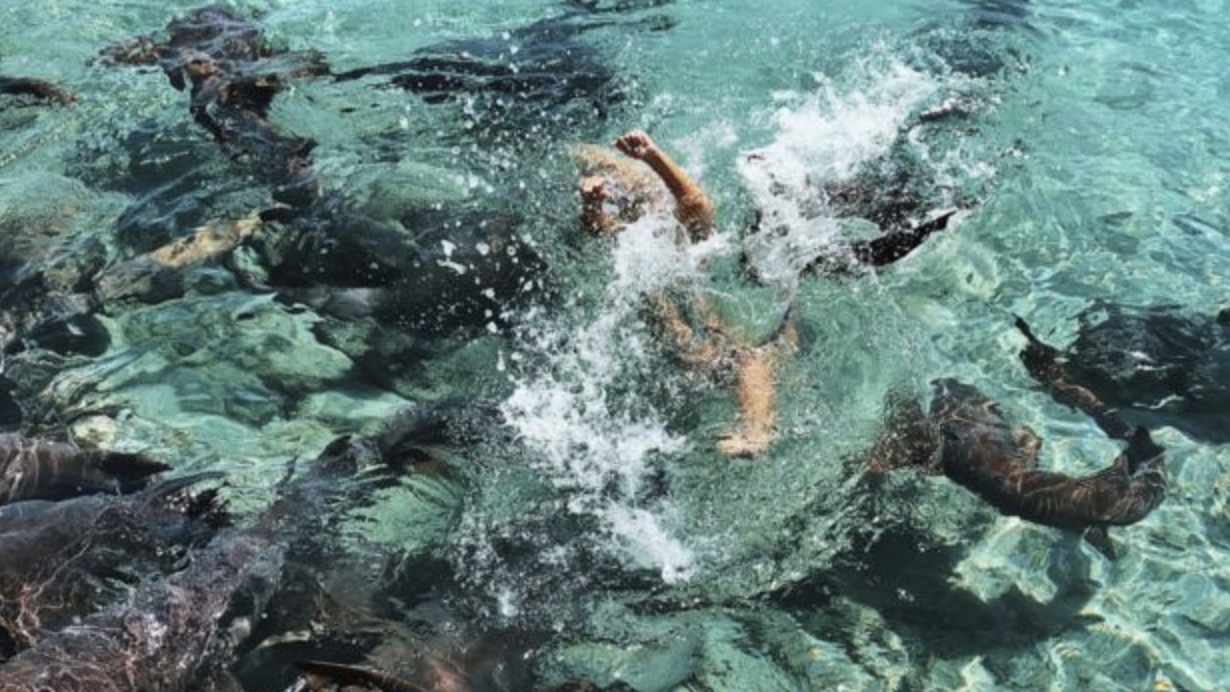 Finally, the shark let go and Katarina was able to stand. She wisely held her wounded wrist above the water so that her blood wouldn’t drive the sharks into a frenzy. 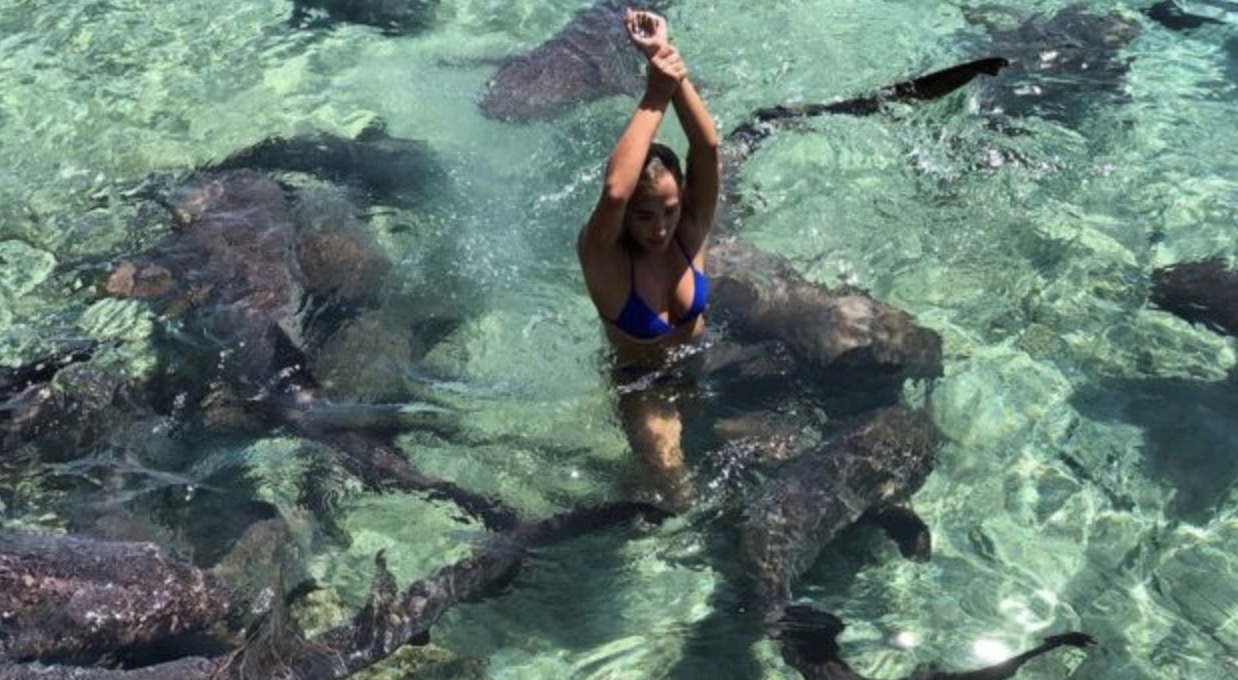 During the attack, Katarina managed not to struggle, which might have encouraged the shark to keep biting. “At that point your body has so much adrenaline going and you just have to get out of the situation, but I stayed extremely calm,” she said.

Katarina’s shark bite needed stitches and antibiotics. She was left with a gnarly scar, as well as some fragments of shark teeth still embedded in her arm. 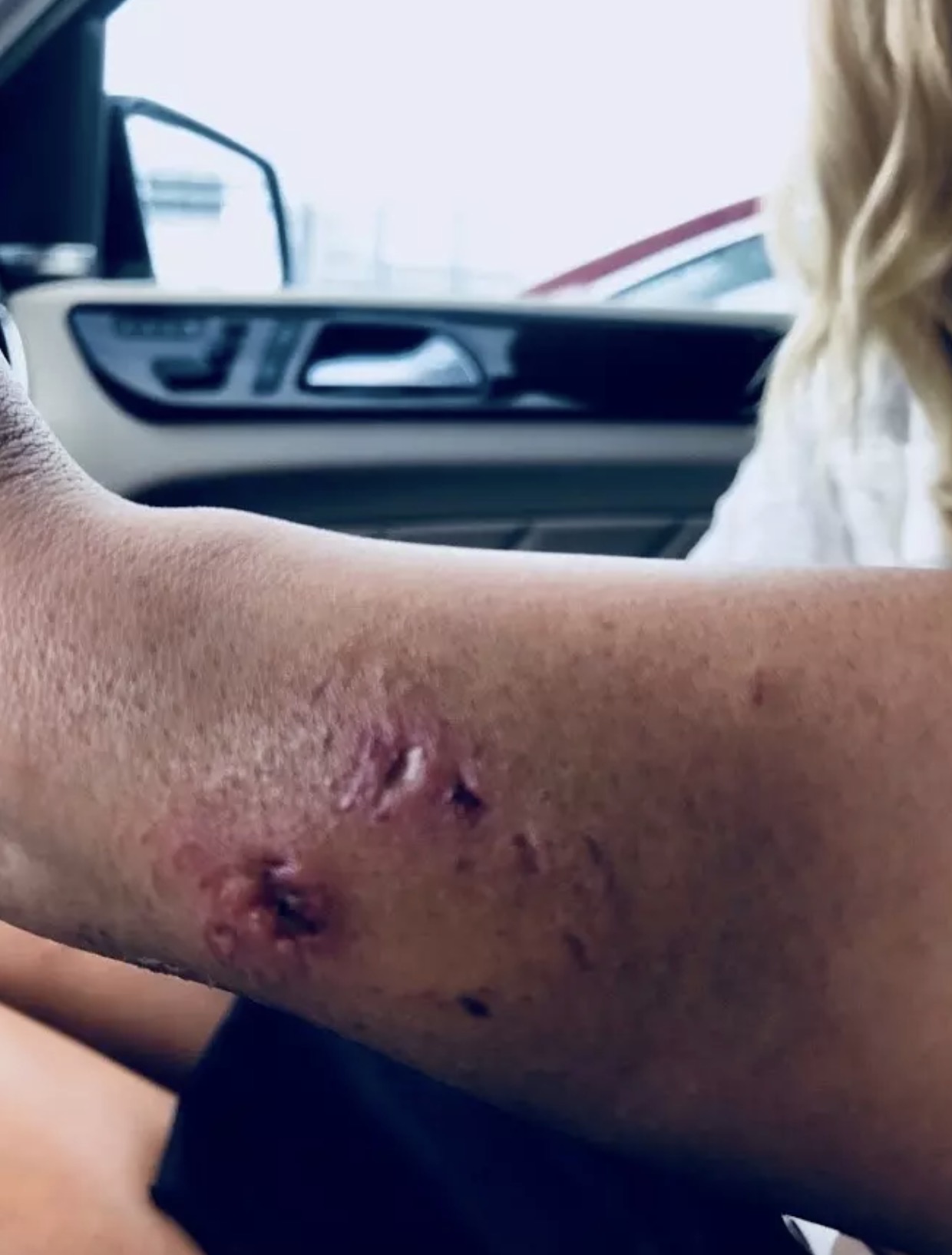 The worst part of this experience wasn’t the shark bite, it was the ensuing social media frenzy. Jerks flooded  Katrina’s social media page with negative and abusive comments, accusing her of taking the photos just to get Instagram famous–in fact, she didn’t upload them to her Instagram until journalists contacted her about the story.

“They took the information they wanted and really spun the story in a way that I’m a stupid blonde Instagram model,” she said. “But it’s the internet right? I guess you know you have to take it with a grain of salt and it comes with the territory.” 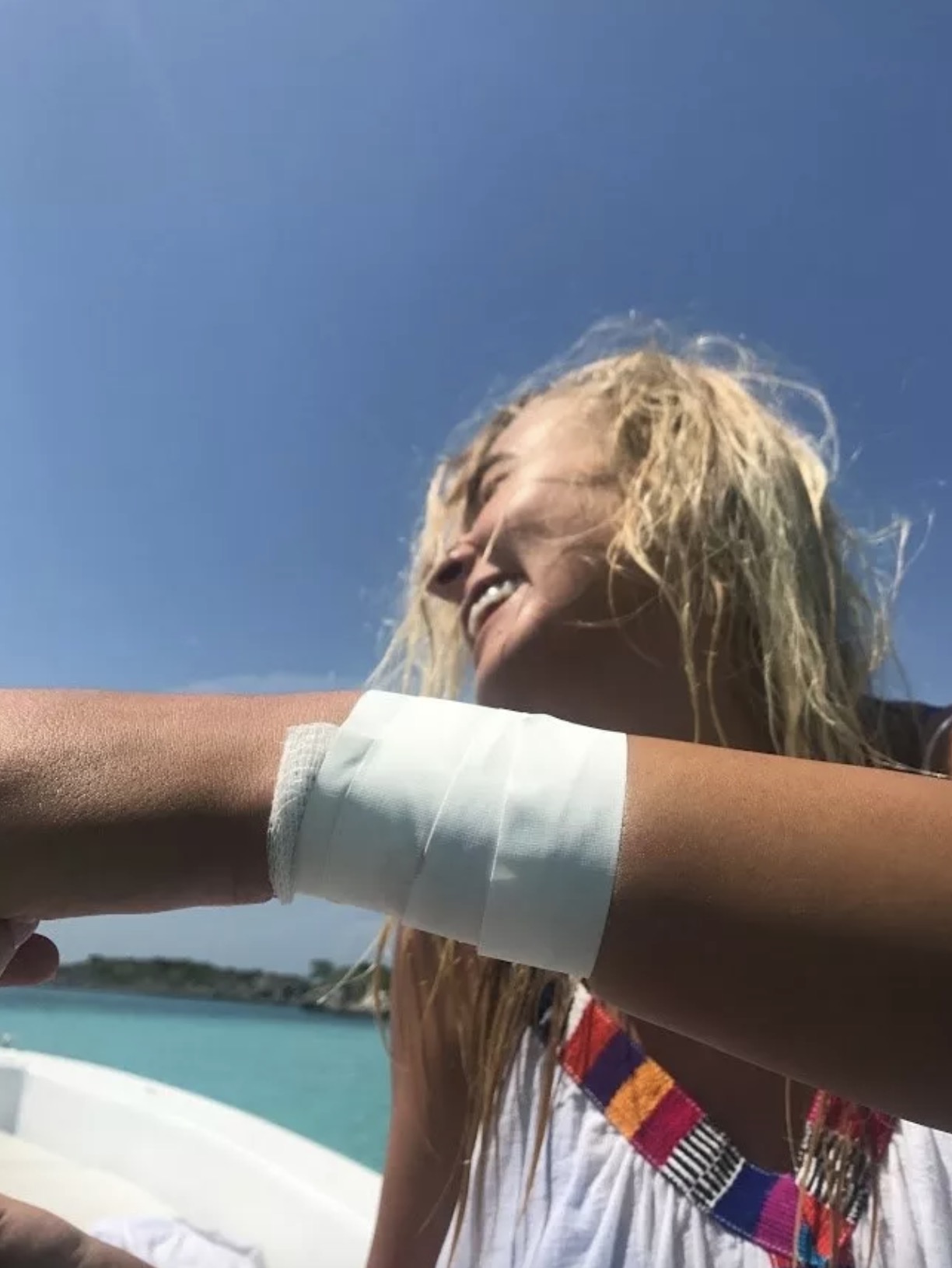 Despite the Internet jackassery, Katarina has stayed positive about the experience. She still loves the ocean, and she doesn’t want her experience to make people afraid of sharks. She doesn’t even blame this particular shark for the attack.

“He didn’t mean it: he’s a wild animal, and I think anyone that goes and swims with nurse sharks needs to realize it is an uncontrollable situation,” she said. “You can’t even predict how another human is going to react to situations, let alone an animal. I definitely will be thinking twice but it won’t be scaring me away!”

I, on the other hand, will be in bed cowering under the covers for the next several weeks.

h/t: Buzzfeed and The BBC