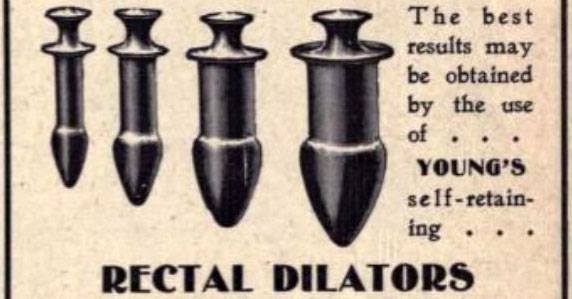 If You Were Constipated In The Early 1900’s, You Needed Dr. Young’s Rectal Dilator

OK, folks! Get ready to dominate your dinner party conversation this weekend, because you’re about to learn a whole lot about everyone’s favorite subject: constipation remedies! Your social calendar is about to fill right up…much like a constipated person fills up with undischarged fecal matter!

But in the late 19th and early 20th century, constipation remedies were a lot less gentle and a lot more…butt pluggy. Introducing: Dr. Young’s Rectal Dilators. 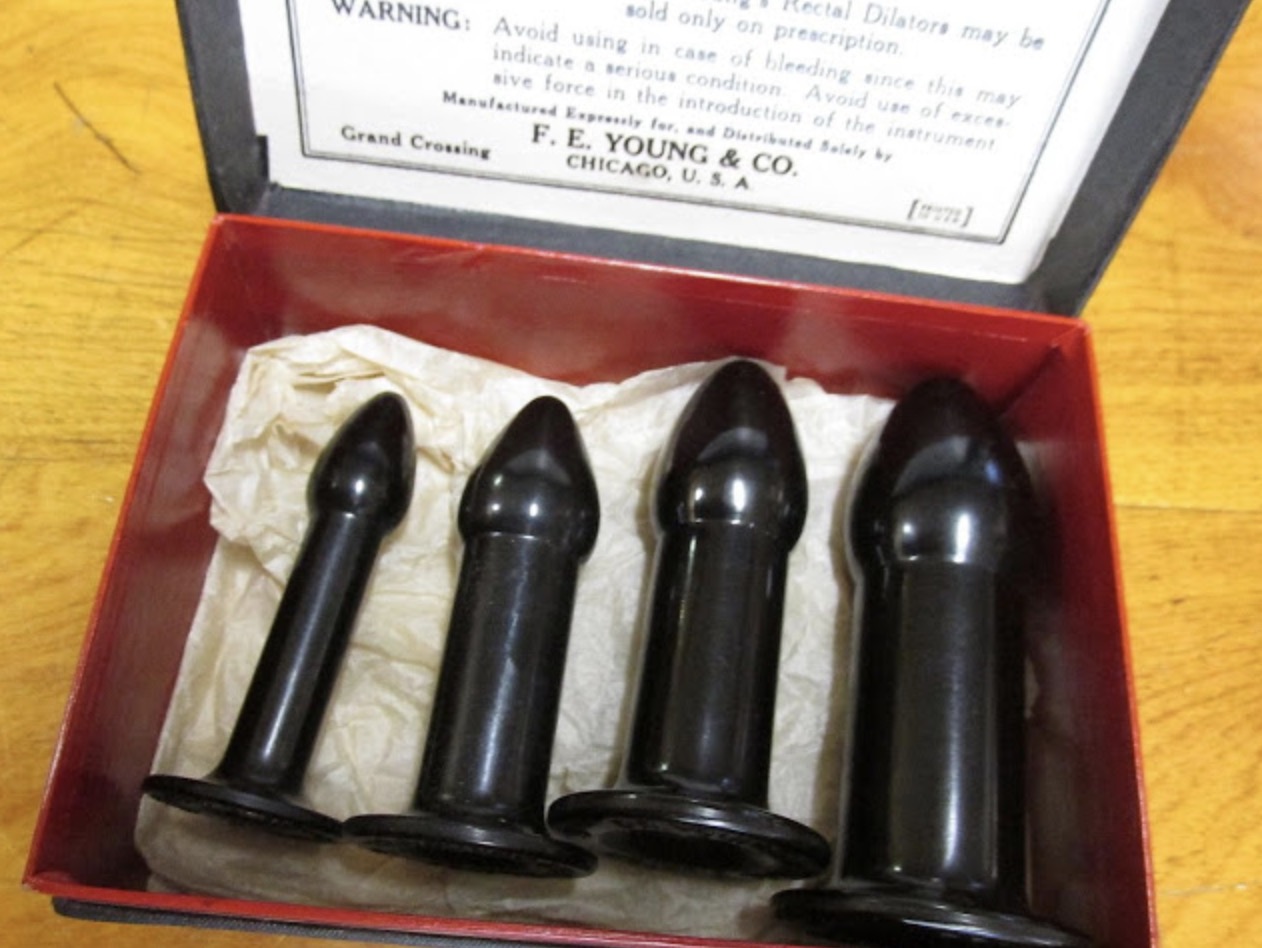 In late 1800’s America, more and more people were turning to patent medicines for relief. These were concoctions claiming to contain exotic ingredients and promising to cure almost any ailment–and since this was before the Food and Drug Administration existed, they could pretty much claim whatever they wanted.

In 1893, a physician and patent medicine inventor named Dr. F.E. Young began publishing A New Way, a monthly medical journal devoted to the treatment of chronic diseases. But (butt?) really, it was a place for inventors to advertise their new medical gadgets. This was where Dr. Young first introduced the world to his rectal dilator.

Originally, the rectal dilator wasn’t even marketed as a constipation remedy, but instead as a cure for…insanity. Dr. Young wrote that “Three-fourths of all the howling maniacs of the world” were curable “in a few weeks” time by the application of “orificial methods.”

Curing mental illness with butt plugs? Sure, why not! It’s not like the FDA was gonna shut you down. 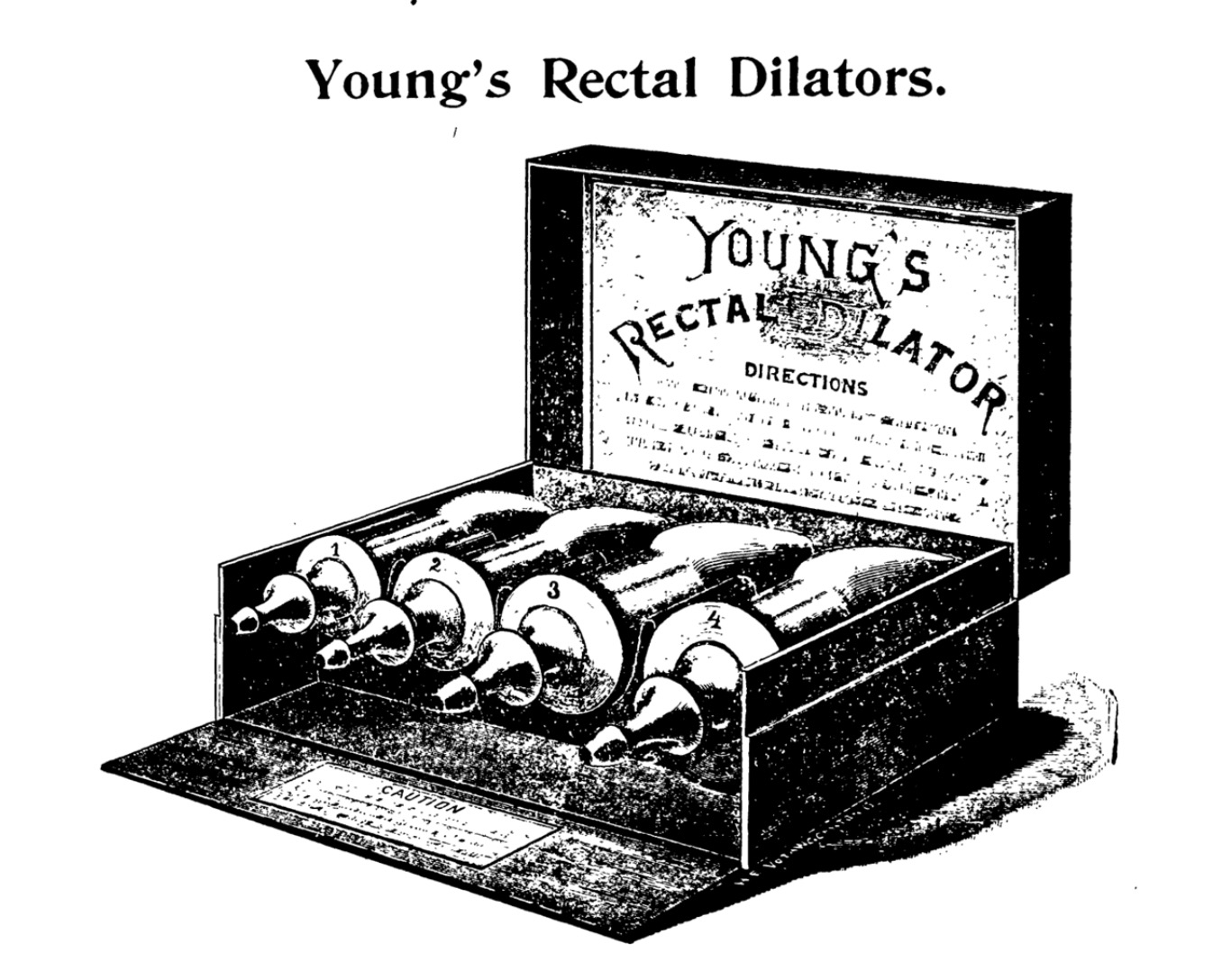 Each box included four rectal dilators, with lengths ranging from 2.5 to 3.5 inches long, and diameters from 0.75 to 1.25 inches wide–Dr. Young called the largest dilator “The Bulb.” He also sold an infant-sized version, and a dilator with a hollow tube for “venting gas.” The dilators were made from black rubber and sold for $4. ($111.66 in 2019 dollars). But if you wanted to pamper yourself, you could get an aluminum set for $5. ($137.59 today.)

According to Dr. Young, “Many patients fainted at the sight of them.”

Nonetheless, Dr. Young claimed that, “Every normal adult of average size should be able in time to insert the largest size without discomfort.” Helpfully, you could also buy a package of “Dr. Young’s Piloment,” which was basically lube. 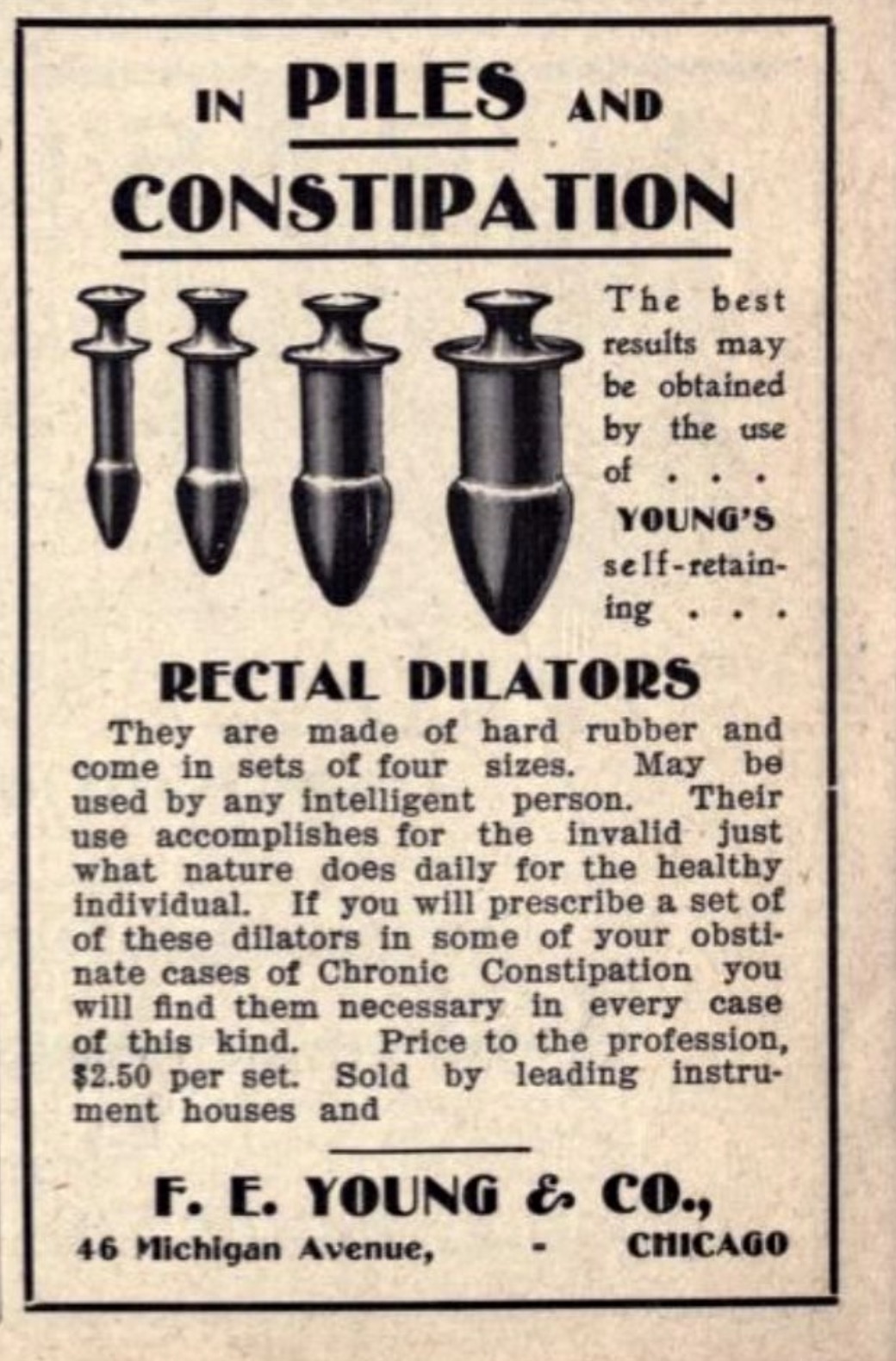 Twelve years later, the rectal dilator was being touted as a constipation remedy. In a 1905 advertisement, Dr. Young and co. pushed their rectal dilators as a cure for piles and constipation. “Do not neglect to use your Dilators,” the ad said. “It is advisable to use occasionally as a precautionary measure. You need have no fear of using them too much.”

To be clear, it’s not that rectal dilators themselves are quackery. Similar versions to Dr. Young’s dilators are still in use today for rectal examinations and constipation relief. 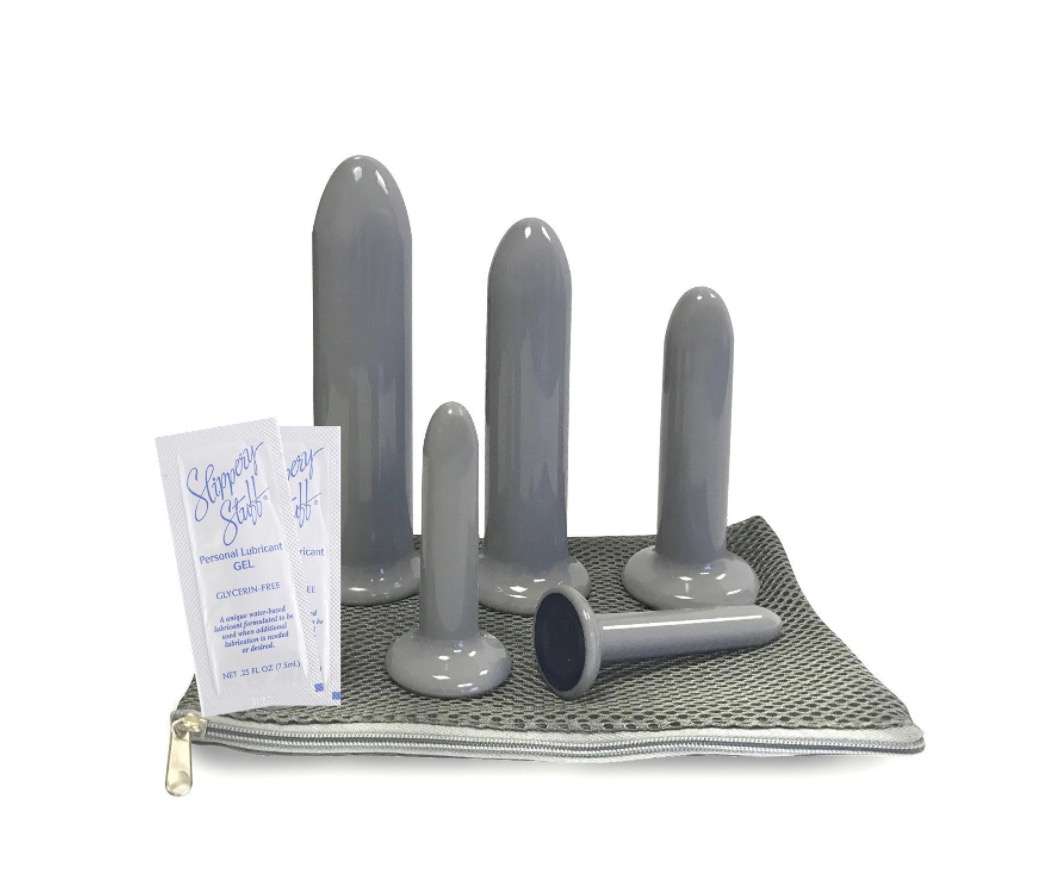 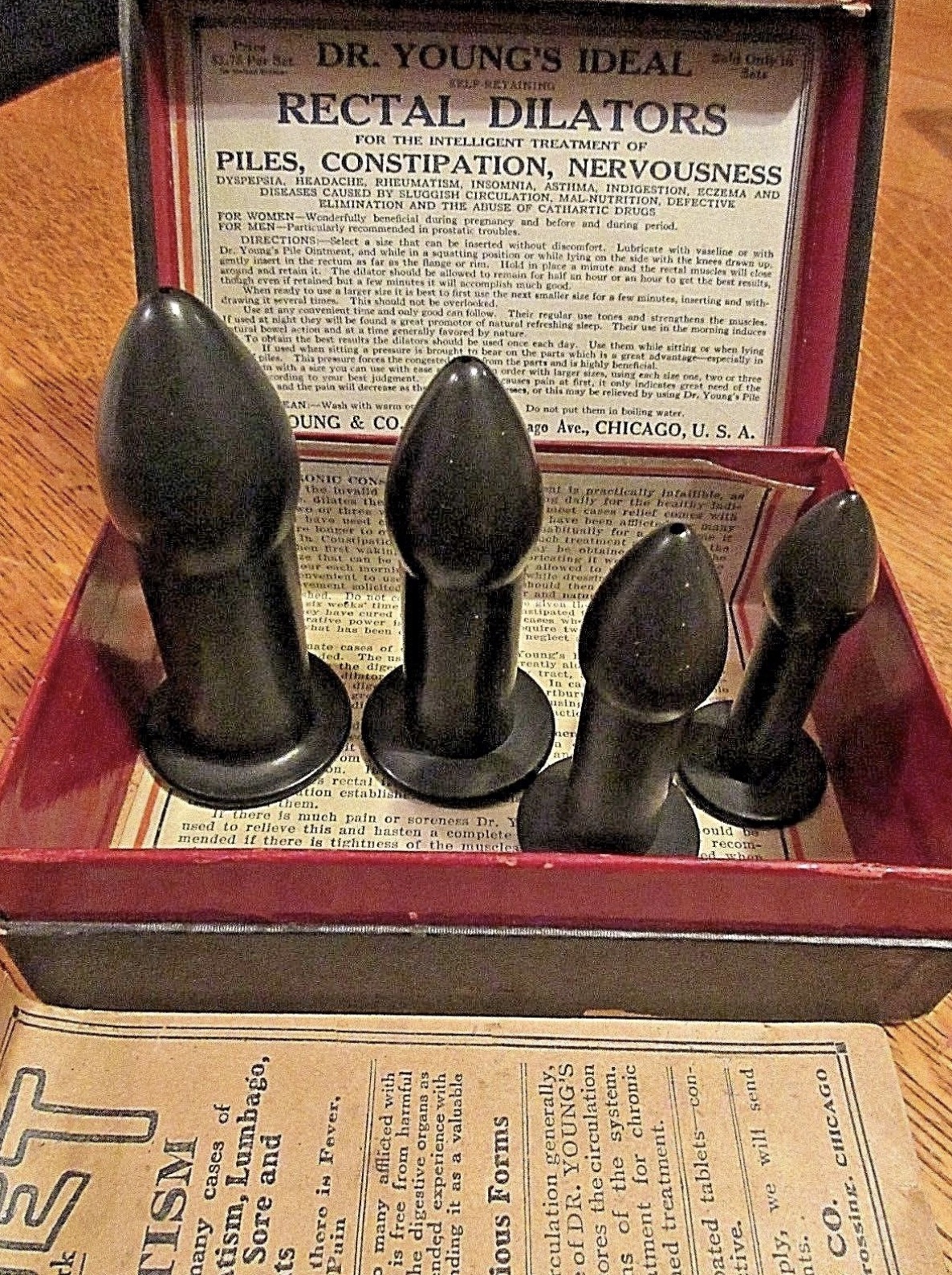 Photo Credit: Vintage EverydayTangent, but, all of this is super weird, but to me the weirdest detail is the use of the word “Ideal.” What does Dr. Young’s Less-Than-Ideal Rectal Dilator look like? Is it shaped like a question mark? Or covered in sandpaper? Is it just a rotting pumpkin filled with wasps? I don’t wanna know.  Tangent over.

Fortunately for Dr. Young and his Miracle Universal Butt Plug, the law did not cover the sale of medical devices, so he was allowed to continue selling them. 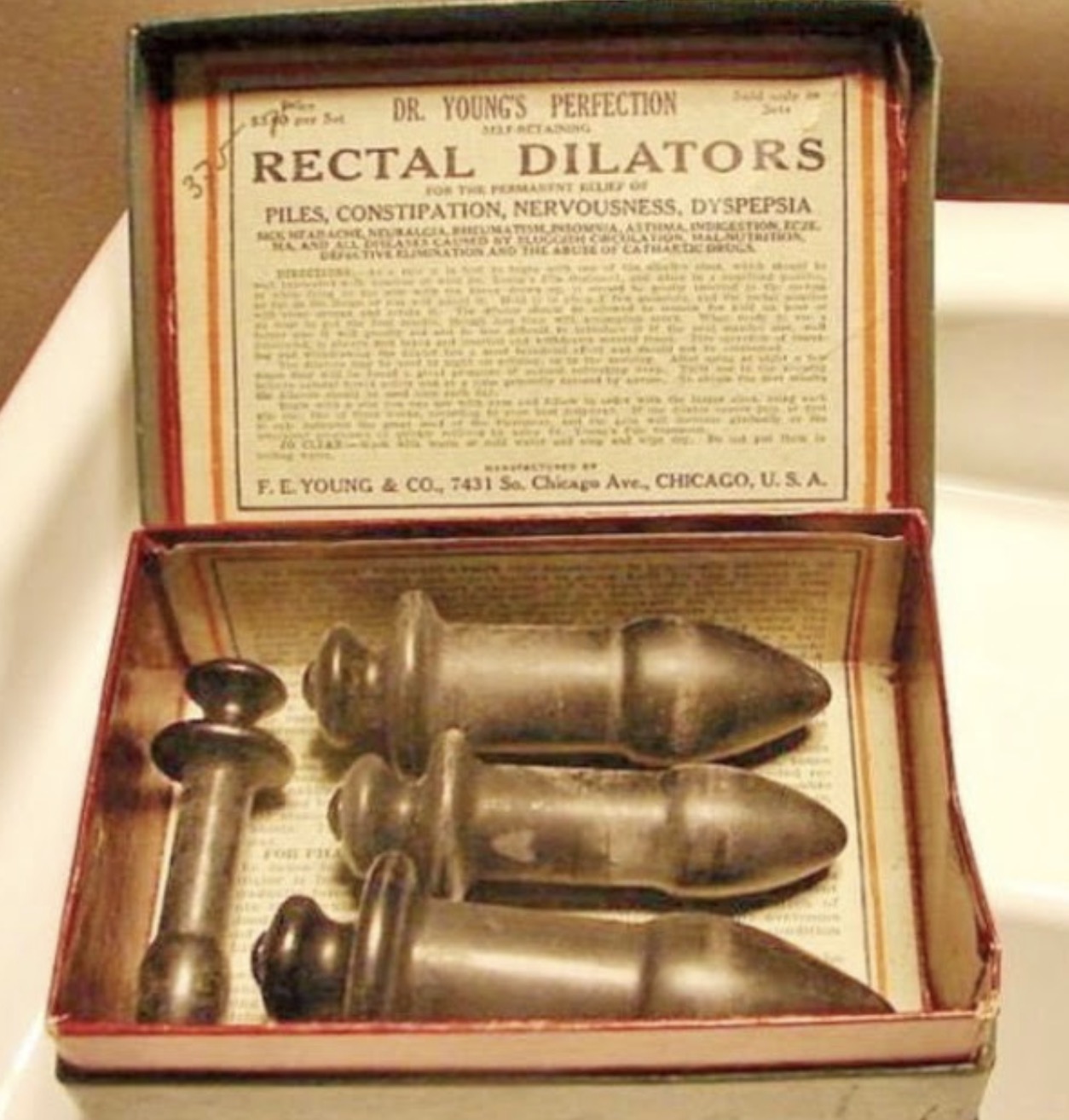 Things didn’t change until Congress passed the Federal Food, Drug, and Cosmetic Act in 1938. This law allowed the FDA to oversee the safety of foods and drugs as well as cosmetics and medical devices. Under the new rules, Dr. Young’s rectal dilator was deemed “Dangerous to health when used with the frequency and duration prescribed, recommended or suggested in the labeling.”

Finally, in 1940, the US Attorney for the Southern District of New York seized a literal truckload of butt plugs. Authorities recovered 67 sets of dilators and 83 packages of Dr. Young’s Piloment, and ordered them to be destroyed.

It was all over. 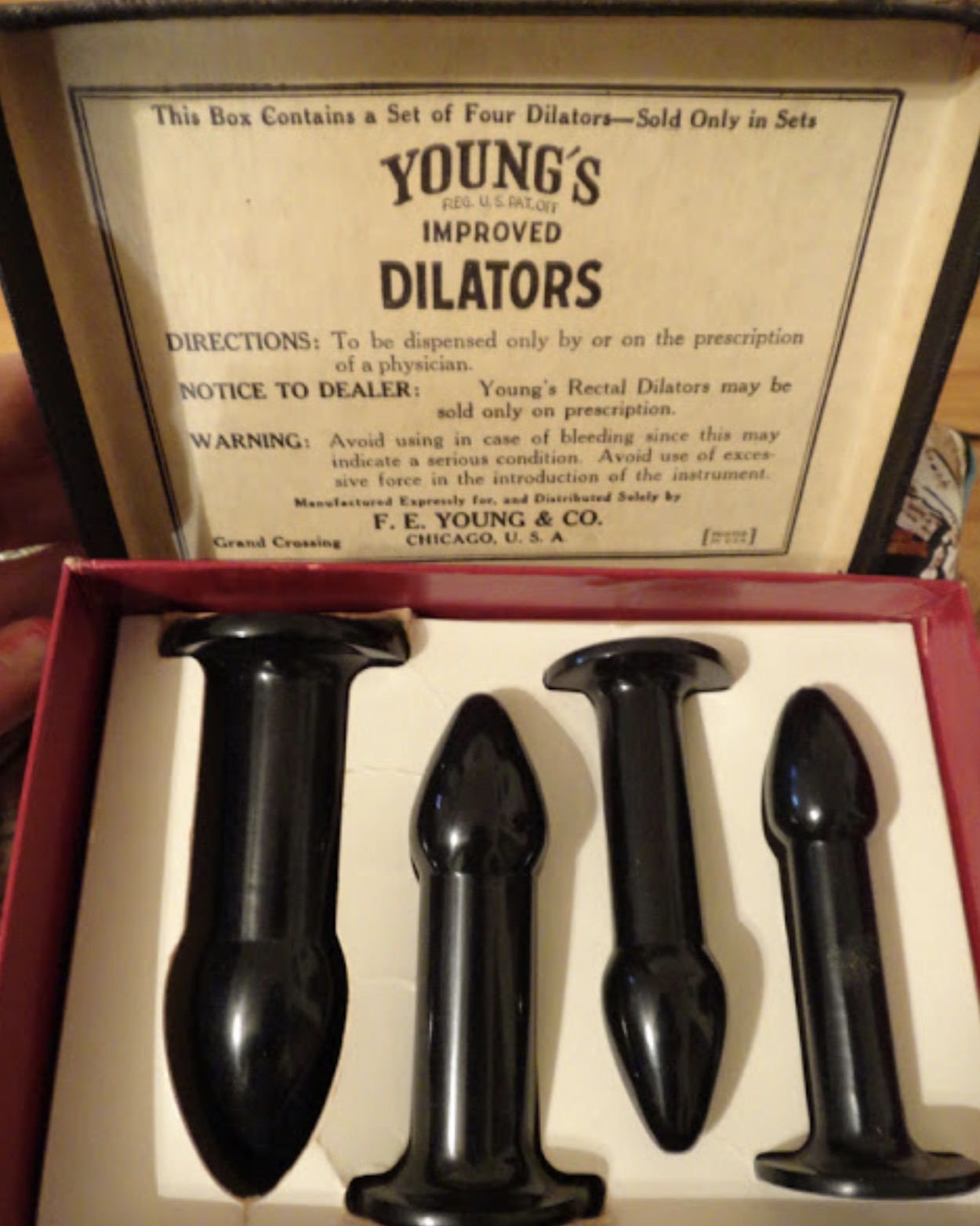 By midcentury, constipation remedies began to be less invasive and more holistic. Denis Parsons Burkitt, a surgeon and missionary, studied the people of Uganda in the 1950’s and 60’s, and concluded that a diet high in dietary fiber was the key to health. By the 70’s, doctors around the world were prescribing bran and other fiber-heavy foods to treat constipation. In the years since, medical science has come up with more and more constipation remedies, and it’s estimated that the market for them will be $22.93 billion by 2025.

Being constipated is no fun, but at least we have options. So the next time you want to complain about how awful 2019 is, remember: it could be a lot worse. You could be treating your constipation with butt plugs, instead of using your butt plug for fun. Like the Lord intended.