How a 12-Year-Old Girl Became a New Feminist Hero

How many times in the past couple of years has something online or in the news made your blood boil with feminist rage? I’m guessing more than a couple, and if you’re like me, you usually handle it by venting to your partner or spewing anger into the useless void of the internet.

But not Julianne Speyer, a 12-year-old Girl Scout from Ohio. She saw something that made her angry, and did what she could think of to change it, with a letter directed toward the people who made it happen.

It all began at her town’s local 4th of July parade, when the announcer introduced the Boy Scouts and the Girl Scouts differently – the boys were touted as the “future leaders of America,” while the girls were “just having fun.” Even though the announcer might not have been being intentionally sexist with his remarks, Julianne was listening – and so were the others in attendance. 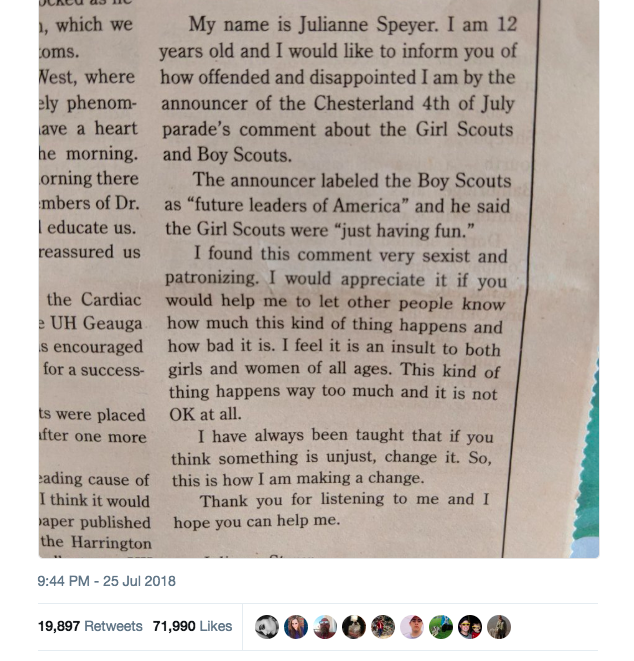 She felt that she couldn’t let it go without comment, and since none of the adults were stepping up to make an eloquent, public protest, young Julianne wrote a practically perfect letter to the editor and sent it to her local paper.

They printed it (yay, journalists!), and since then, she’s become something of a feminist hero and inspiration around the country (and the internet). Here’s the full text of the letter:

“The announcer labeled the Boy Scouts the ‘future leaders of America and he said the Girl Scouts were ‘just having fun.’ I found this comment very sexist and patronizing. I would appreciate it if you would help me to let other people know how much this kind of things happens and bad it is. I feel it is an insult to women and girls of all ages. This kind of thing happens way too much, and it is not OK at all.

Julianne said she wrote the letter after talking to her fellow Girl Scouts, who came to the consensus that the characterization of them and their organization at the parade simply wasn’t fair – and it wasn’t. Women are proving every day that they are the future – and current – leaders of America, but unless we continue to remind young girls of that fact, their dreams and confidence may begin to erode.

That said, Julianne and her fellow Scouts don’t seem to need reminding. Instead, they’re leading the charge, to the pride and fist-pumping of card-carrying feminists everywhere.

So the next time you see or hear something that doesn’t feel right, channel your inner 12-year-old girl and do your best with what you have to make the changes you want to see in the world.