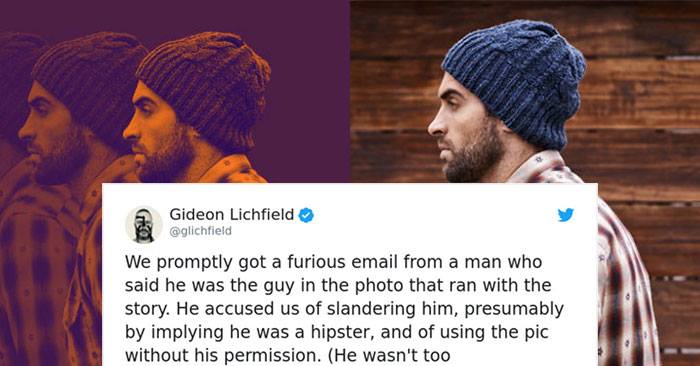 Hipster Complains After Website Uses His Photo To Say All Hipsters Look Alike, Then Realizes It’s A Different Hipster

If you asked ten people to picture a hipster, they’d all probably come up with the same thing: flannel shirt, skinny jeans, Civil War-era facial hair, and an overall attitude of superiority over everyone else. And sure, that’s a stereotype, but recently, the scientific journal MIT Technology Review published a paper attempting to prove that all hipsters do look alike. Based on one hipster’s response, the paper seems right on the money. 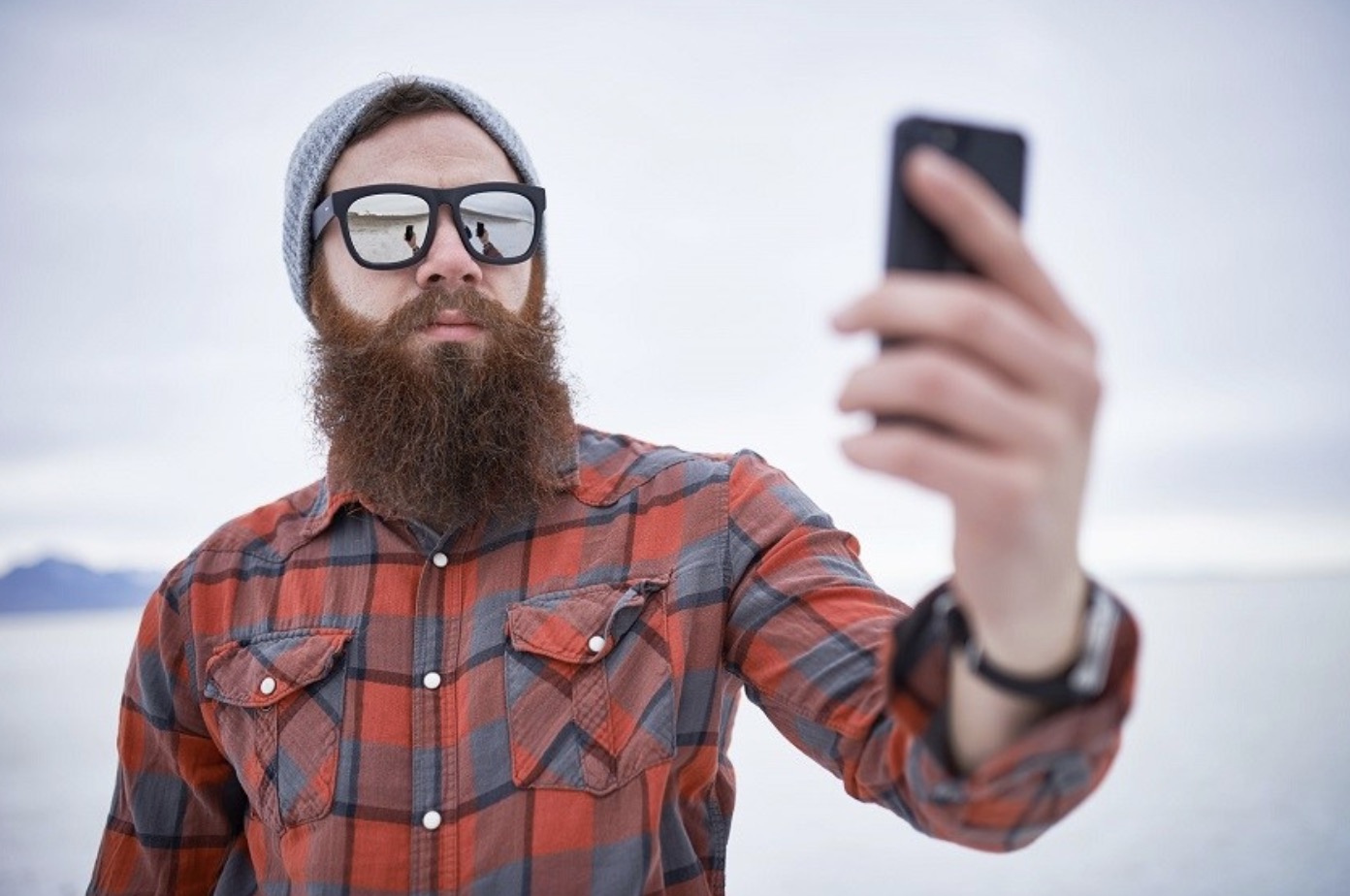 The paper, written by Brandeis University associate professor of mathematics Jonathan Toubol, is called “The Hipster Effect: When Anti-Conformists All Look The Same.” We’ve all probably noticed that even though hipsters claim to be non-conformist, they still all look really similar. In the paper, Toubol uses a mathematical model to investigate how and why hipsters become “synchronized” with each other.

Gideon Lichfield, MIT Technology Review‘s editor-in-chief, described the paper to NPR: “What the study found essentially was that when a group of people decide to be different, to do something nonconforming, there comes a point when they all end up adopting the same behavior or the same style.”

I didn’t know you could use math to answer that question, but then again my math skills peaked at long division. Here’s a bunch of diagrams that you and I definitely don’t understand. 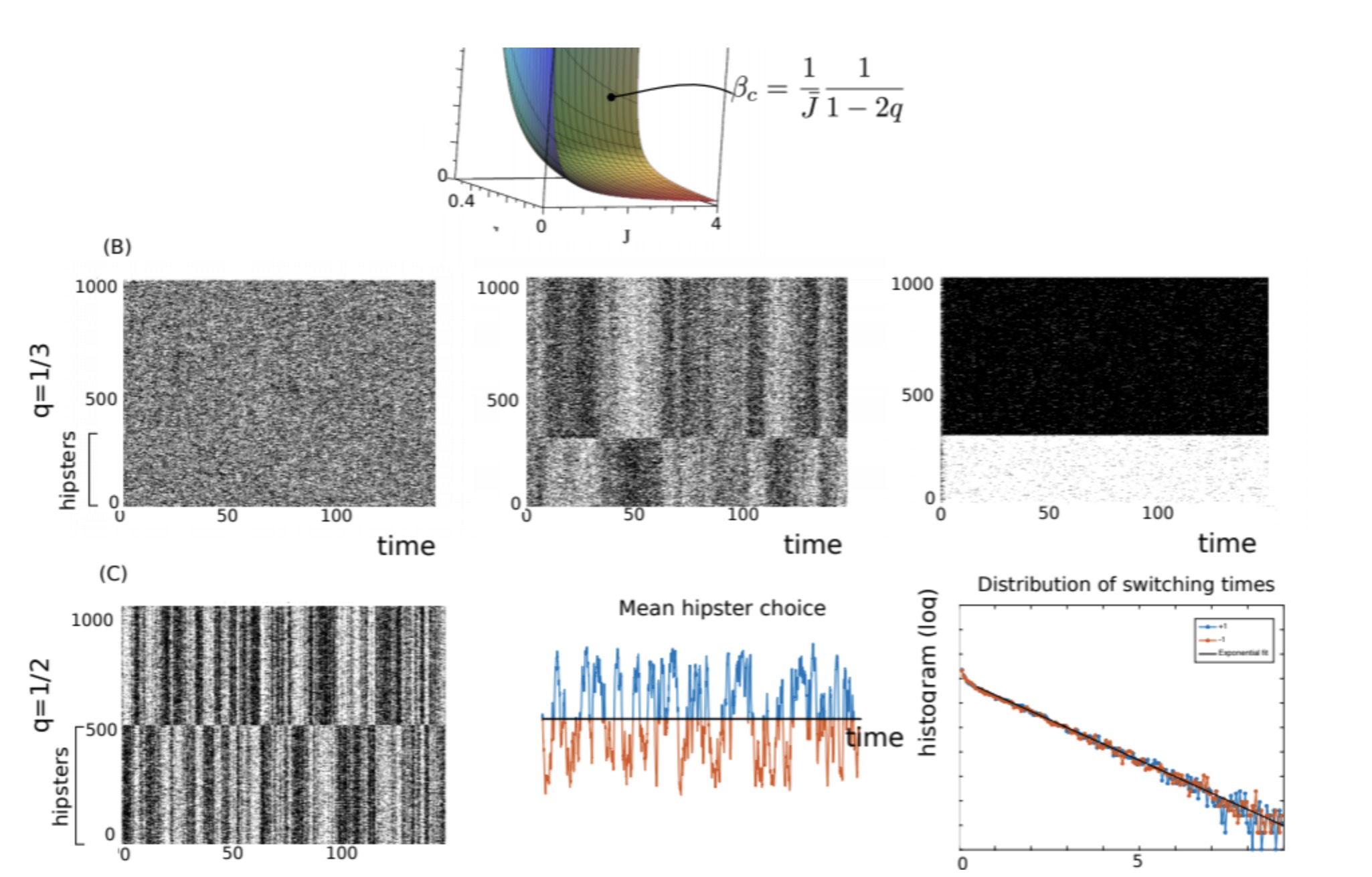 Now here’s the funny part. When the paper was published, it was accompanied by a Getty Images stock photo of a bearded man in flannel–the platonic idea of hipsterdom.

Almost immediately, MIT Technology Review received an email from a gentleman claiming to be the hipster in the photo. And he wasn’t too happy with being labeled as such. Like everyone does in 2019, he even threatened to sue. Here is the email. Try not to let your eyes roll too hard:

“You used a heavily edited Getty image of me for your recent bit of click-bait about why hipsters all look the same. It’s a poorly written and insulting article and somewhat ironically about five years too late to be as desperately relevant as it is attempting to be. By using a tired cultural trope to try to spruce up an otherwise disturbing study. Your lack of basic journalistic ethics and both the manner in which you reported this uncredited nonsense and the slanderous unnecessary use of my picture without permission demands a response and I am of course pursuing legal action.”

In response, Lichfield did the responsible thing and checked with Getty. 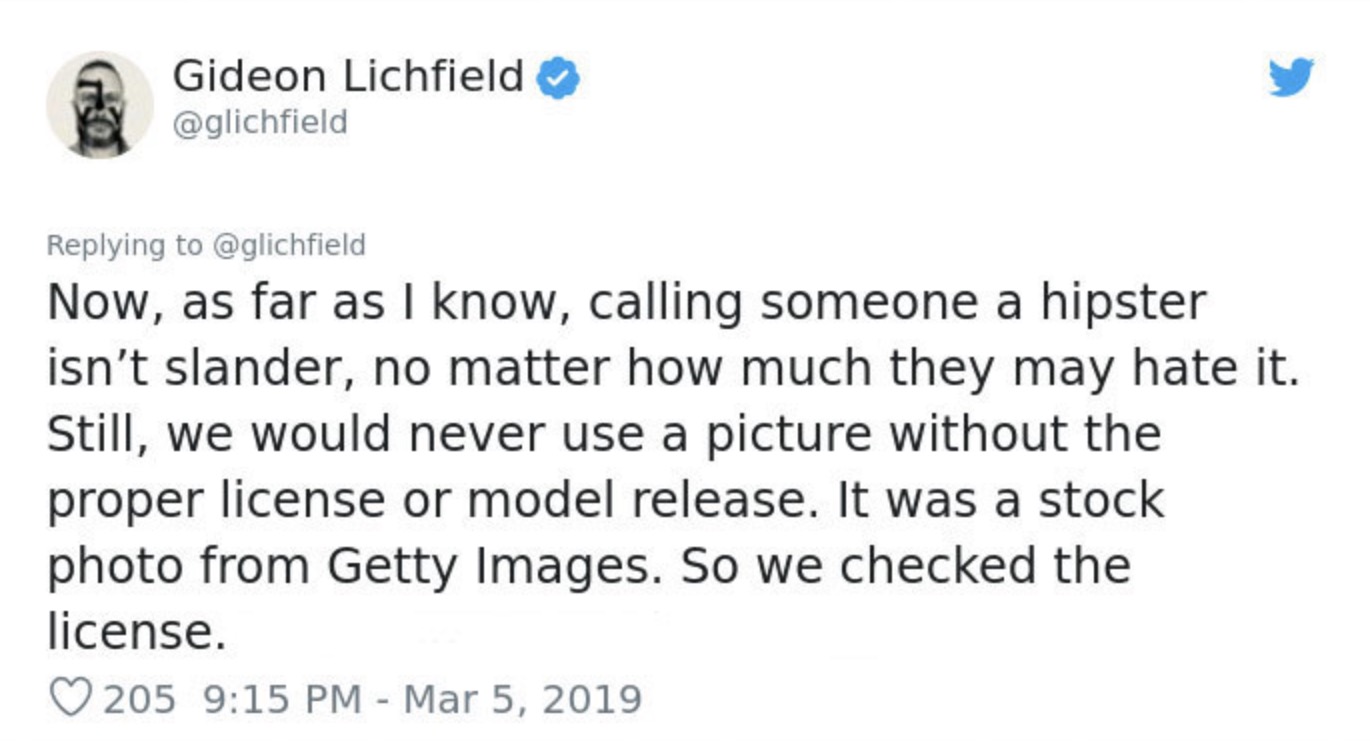 Not only did Lichfield confirm that the photo was licensed properly–meaning, even if the email did come from the hipster in question, MIT still had the right to use it with their article–but the email’s author was not the man in the photo.

After learning the truth, the man backed down:

“Wow, I stand corrected I guess. I and multiple family members, and a childhood friend pointed it out to me, thought it was a mildly photo-shopped picture of me. I even have a very similar hat and shirt, though in full color I can see it’s not the same. Thank you for getting back to me and resolving the issue.”

And that was that. But in case your irony detector is faulty today, Lichfield neatly summed it up. 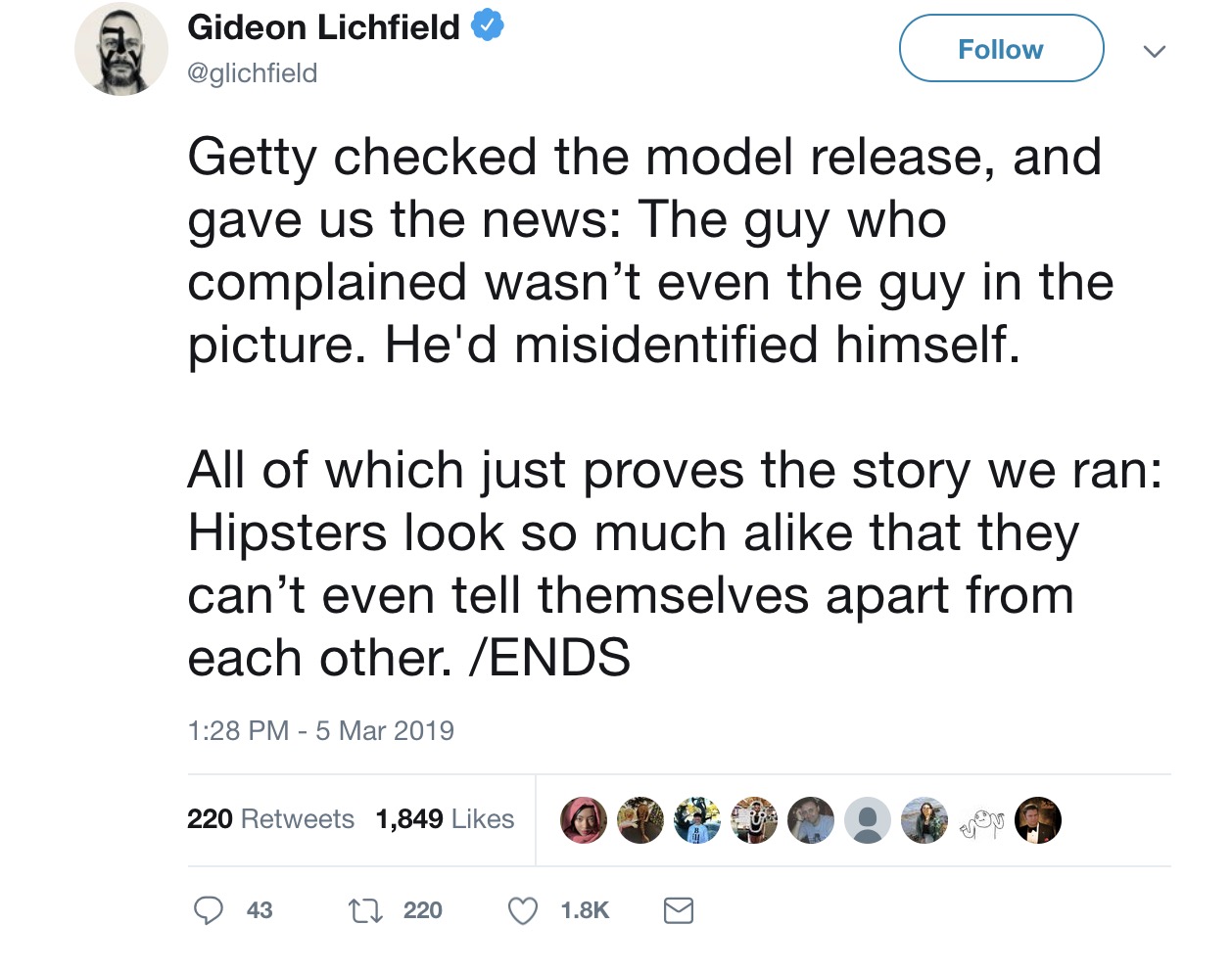 Brutal! Is there anything tastier than when a self-righteous person makes a complaint without the facts to back it up? Yes: when that person is a PBR-toting hipster.

People on social media were delighted to hear about the hipster’s own-goal of an email. Many pointed out how this is basically a joke come to life:

Conformist non-conformity is nothing new.

The Germans should invent a word for what just happened. 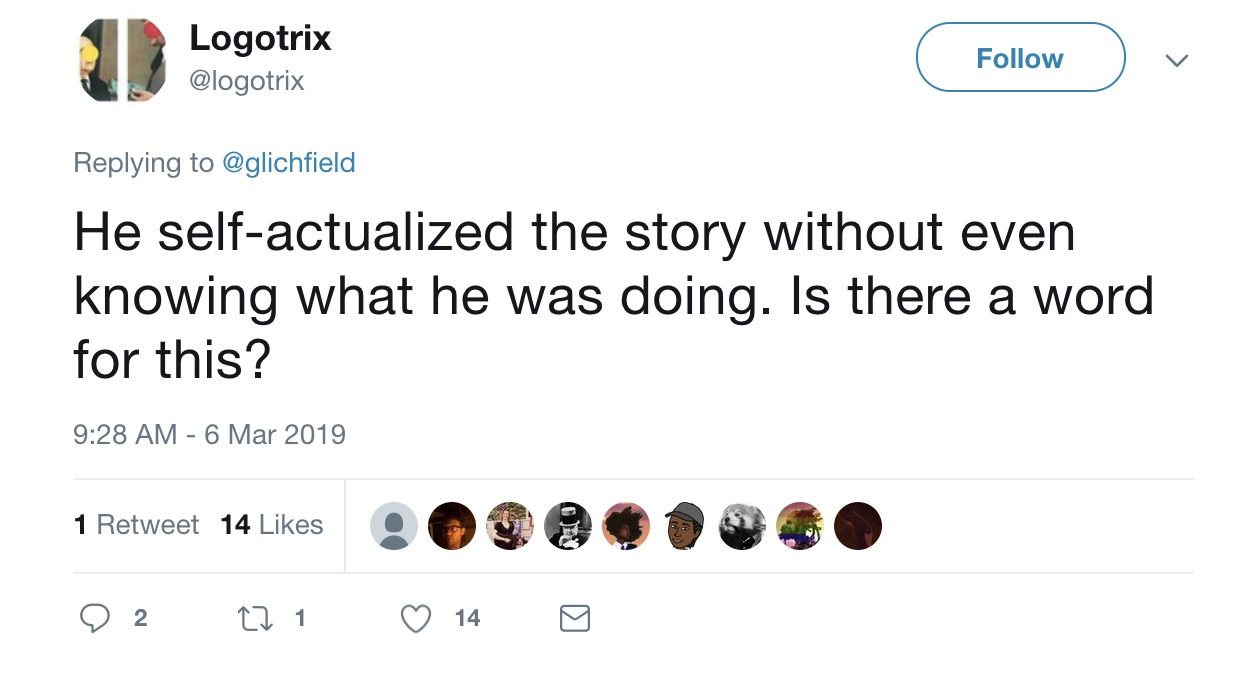 So there you have it, hipsters: definitive proof that your non-conformity is in fact the opposite. The only thing to do now is refuse to conform with your fellow non-conformists. Trade in your flannels for Brooks Brothers, start listening to Pearl Jam, and for god’s sake, try a microbrew. You just might like it.