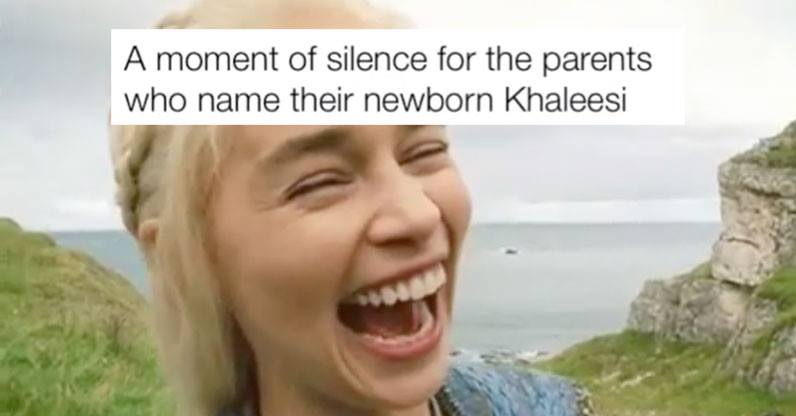 WARNING: this article discusses major plot points from Game of Thrones season 8 episode 5, which aired last Sunday. If you still haven’t seen it, beware! There be spoilers ahead!

For the past seven and a half seasons, Game of Thrones fans have been rooting for Daenerys Targaryen, the exiled Mother of Dragons who has long been working to retake the Iron Throne and bring peace to Westeros. For most of the series, Dany has been easy to root for. She’s overcome considerable adversity. She’s risen from being the wife of a warlord to being one of the most powerful people in the world. And she did it all while (mostly) being a decent human being.

Until Sunday night. Dany had finally attacked King’s Landing. Her last living dragon had just destroyed basically all of her enemies’ defenses. Nothing was stopping Dany from taking the Iron Throne. But before she did, she decided to massacre thousands of innocent civilians.

It was a shocking moment, and it’s still being hotly debated across the Internet. But probably nobody was more shocked than parents who have been naming their daughter after the now-Mad Queen since the show debuted.

Pretty much immediately, the memes started.

All those parents who named their daughters Daenerys and Khalessi after this episode:#gameofthrones pic.twitter.com/bEuhBhuNOf

Parents naming their children after Game of Thrones characters is more common than you might think. According to the Social Security Administration, 4,500 babies born in 2018 were named after GoT characters–and there are probably more than that, because the SSA only publishes information on names given to five or more babies. There’s probably at least one baby Qhorin Halfhand out there somewhere right now.

So, how do these parents feel about their daughter’s namesake suddenly going full supervillain? This week, various online publications have been reaching out to these parents, and they’ve got some answers.

The Cut caught up with Katherine Acosta, who’s the mother of one-year-old Khaleesi. Not only does she still stand by her daughter’s name, she also thinks Daenerys’s actions were justified.

“I’m still behind her. Even after last night’s episode, I’m still rooting for her. I don’t think she did anything wrong. I think she did what she had to do. She gave many options. She tells you, ‘Are you gonna bend the knee, or are you not?’ So I don’t know why everybody’s acting surprised. She’s done this before. If you betray her, you don’t bend the knee, look what happens.

I would argue that this is exactly why people are so upset. The army defending King’s Landing had already surrendered, aka bent the knee, before Daenerys decided to roast them all. But then again, I didn’t name my baby after Dany, so I don’t have much skin in the game.

Buzzfeed spoke with several parents of Khaleesis. They weren’t fazed by Daenerys’s dark turn, either. Channy, the mother to an 11-month-old Khaleesi, had no problem with Dany’s decision. “She’s going for what she wants,” she wrote.

Nikki Soto, mom to Khaleesi Lila, chose the name “Khaleesi” because it means “Queen,” and she still stand by both the name and the character. “What girl hasn’t overreacted when they see their whole world crumbling around them?” she said. “I feel for her. I’m just bummed Jon and her have to be related. I wanted them to live happily ever after.”

It’s true what they say: one person’s war crime is another person’s “overreaction.”

Over at Vulture, parents had mixed feelings about it. Hector Morales named his daughter Daenerys, and he doesn’t agree with Dany’s decision. “When I saw the dragon burning innocent civilians and houses with no restraint, I was sad. This is not the character I fell in love with.”

At the same time, this is his daughter we’re talking about, and Hector is still attached to her name. “I have very fond memories because of that name, because of how attached I have been to this series.” Like the time he felt his unborn daughter kick just as one of the characters said Dany’s name.

Everyone: Targaryens are all mad but Dany isn’t there’s no way

Finally, the folks over at The Ringer caught up with a few parents who named their children “Khaleesi” or “Daenerys” years ago. This presents a trickier challenge, because their kids are now old enough to, if not watch Game of Thrones, at least understand who their namesake is.

Danny and Amanda Cisneros are the parents of six-year-old Daenerys. They’ve mostly kept their daughter in the dark about what happens on the show. For example, they haven’t told their daughter that two of Dany’s three dragons are now dead, which has often been cited as a reason why she immolated King’s Landing. “We went into GameStop the other day and she saw the Night King on Viserion, and she was like, ‘Oh, that’s my dragon.’ And I was like, ‘Yeah, he borrowed it.’

When little Daenerys is old enough for Game of Thrones, Danny and Amanda hope to use it as a teachable moment. “It might be a good opportunity as well, to show how even good deeds can go astray with bad decisions.”

On the other hand, Dre Campbell took the honest approach with his six-year-old daughter, Khaleesi.

“I said that she used her dragon to kill a lot of innocent people,” he said. “Khaleesi was like, ‘Wow. Oh, that’s kind of scary.’ And I was like, ‘Yeah. That’s not you, though.’”

In the end, none of the parents admitted to regretting their daughters’ names, at least not publicly. Many named their daughters after Daenerys because they wanted them to have the same qualities as Dany once did–strength, courage, tenacity, and justice. Even though Dany may have abandoned those qualities, they still want their daughters to have them.

But still, if any of these parents are feeling regret right now, they could always change their daughter’s name to Hodor. Poor sweet Hodor wouldn’t hurt a fly.