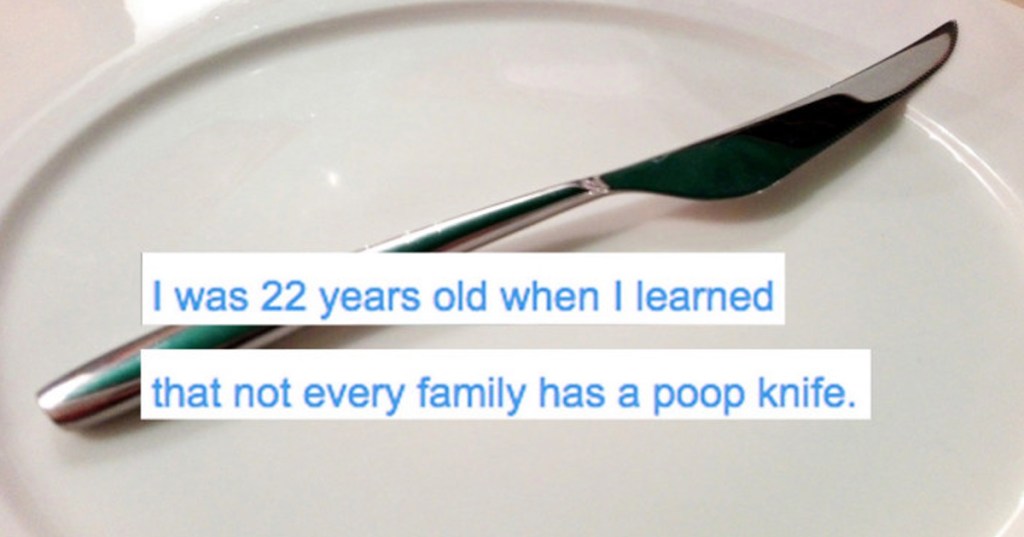 Disclaimer: yeah, you already clicked on a link that said “Poop knife,” but even so, this story is definitely NOT for the fecally squeamish. Turn back now if you want to avoid emotional scars.

Still with us? I warned you.

This story, like all nightmares, comes from Reddit, specifically the r/confession thread, where the appropriately named LearnedButt posted it with the following title:

You know that feeling you get on the Internet when you see something utterly repulsive but you KNOW you’re still going to click on it? There should be a word for that feeling. Maybe the Germans have one already.

How?! How is this happening to them?! I can understand once in a while, but all the time?! Are they a family of competitive eaters?! Do they have Thanksgiving dinner every day of the year?! And most importantly, when is this family getting their own show on Bravo?

Nope. Not at all. Not even close.

“And that’s why I have been banned from every local Walgreens.”

But how did our innocent and naive hero learn the truth about poop knives? The best way to learn anything: with public humiliation!

That part is how you know for sure this story came from Reddit.

Dear Miss Manners: Is it OK to have one poop knife in my household, or should I buy another poop knife for when company is over? Can’t figure out the etiquette on this one.

When your WEED DEALER is judging you…

So, when’s the divorce?

To wrap up his story, LearnedButt addressed an issue many of us probably had when we heard his story.

You know you’ve made it in the world when you’re a multi-poop-knife household.

But that’s not quite the end of the story, as much as I might wish it were. After LearnedButt posted his tale, a few of his fellow Redditors chimed in to say…THEIR FAMILIES HAD A VERSION OF THE POOP KNIFE, TOO!

But for my money the worst exchange on the whole thread was this one:

I am going to move to the desert and live as a hermit for the rest of my days.