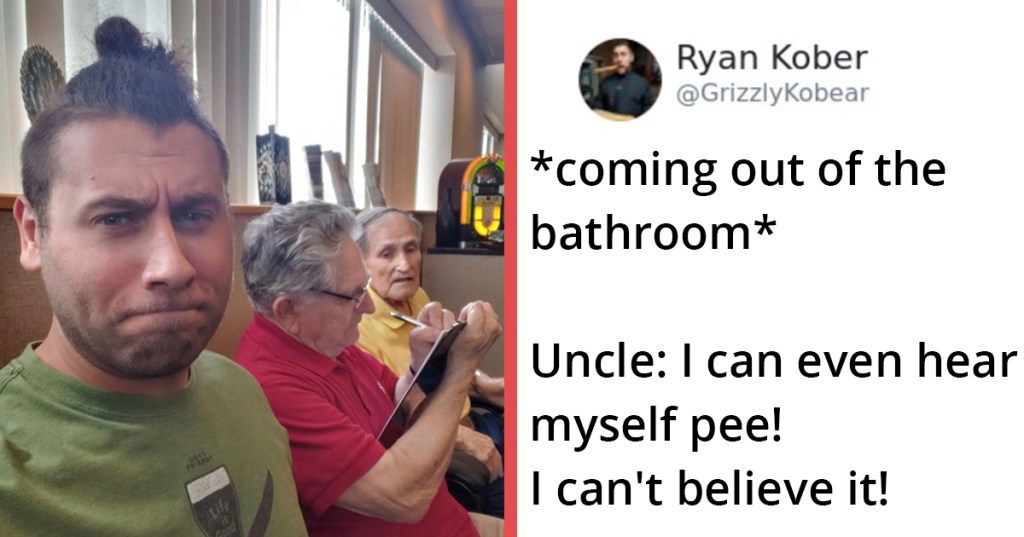 Losing any of our five senses is no joke. Our senses are fundamentally necessary for us to interpret the world, and losing them has a profound effect on every aspect of our lives. When gone untreated, hearing loss has been linked to depression in seniors.

But that doesn’t mean that hearing loss can’t have its funny side. Recently, when grandson Ryan Kober took his grandfather and great uncle to get their hearing aids adjusted, he documented their misadventures on his Twitter feed.

Ryan told Bored Panda that his grandfather and great-uncle, who are brothers originally from Malta, tend to be stubborn when it comes to their hearing aids. “They normally refuse to get anything done about it, even though the whole family has wanted them to get their hearing aids taken care of for a while now.” On top of that, as brothers, they tend to squabble–which their hearing difficulties only make worse.

Ryan finally managed to get his grandpa and great-uncle to visit the doctor. Before they even arrived, things went downhill.

I’m bringing my grandpa and great uncle to get their hearing aids checked.
*they enter my car*
Uncle: See, I can hear you just fine, I don’t need to go.
Me: I didn’t say anything.
Uncle: What?
Grandpa: Yes, I’m fine, thank you.

Upon arrival, Ryan shared a waiting room selfie that pretty much sums up the experience:

Then it was time for grandpa’s hearing test. The tricky thing with hearing tests is that sometimes, they can turn into a singalong.

*doctor is giving my uncle a hearing test*
Grandpa: *LOUD HUMMING*
Me: Grandpa stop humming
Grandpa: YOU CAN HEAR THAT?

And sometimes, singalongs are contagious. Which only added to the confusion.

The doctor is out of the room and they are both humming very loudly in unison. I keep laughing and they keep thinking I’m talking to them.

When you’ve got a song in your heart, you just gotta let it out.

With the musical portion of the doctor’s visit concluded, it was time for Ryan’s great uncle’s turn. The doctor gave his hearing aid a tune-up, and was a game-changer.

Now my uncle can hear himself so well he’s whispering because he was so used to not hearing his own voice for so many years.

A whole new world of sounds opened up!

*coming out of the bathroom*
Uncle: I can even hear myself pee! I can’t believe it!

With both of their hearing aids adjusted, everyone returned home happy.

After Ryan’s Tweets went viral, the Internet fell in love with the hard-of-hearing siblings.

People were taken with Ryan’s devotion as a grandson and nephew.

Now that their hearing-aids are fixed, we wish Ryan’s grandpa and great-uncle many more years of clear communication. Even if that might make things a bit less funny around the house.