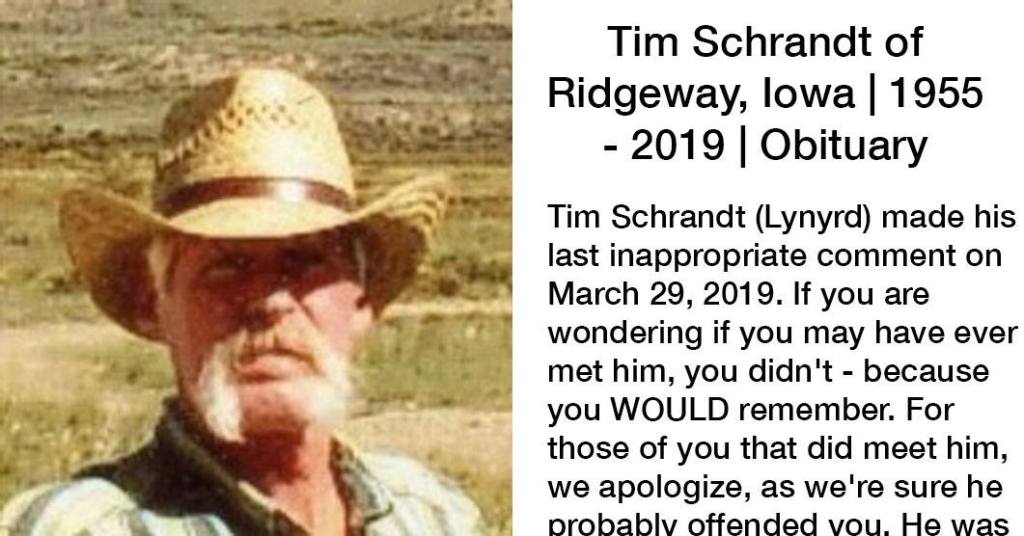 Guy Gets The Last Laugh With Brutally Honest Obituary

Most obituaries sound the same. An obituary is a summary of a person’s life, and it’s usually written by a loved one in a state of mourning, so it’s almost always going to be written in a formal, loving tone.

But an obituary is also a tribute to the dead person. And for some people, a restrained obituary just doesn’t cut it. So when it came time to write up the obituary for Tim Schrandt of Ridgeway, Iowa, his family knew that it could only be written one way: irreverently, and not afraid to pull any punches. Just like Tim was. 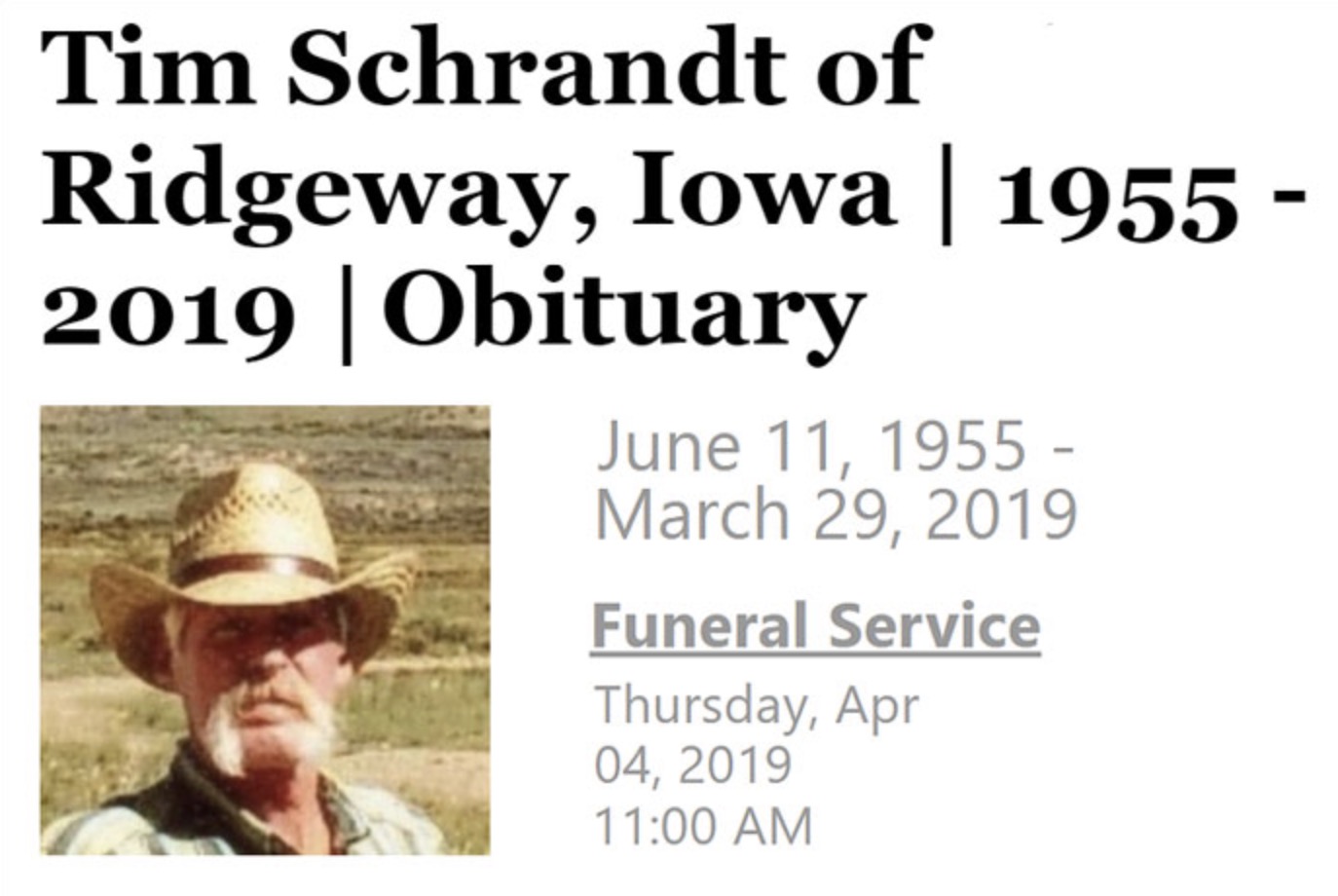 The obituary starts off with the typical announcements about Tim’s funeral.

“A funeral service will be held at 11:00 a.m., Thursday, April 4, 2019 at the St. Wenceslaus Catholic Church in Spillville with Deacon Pat Malanaphy presiding, burial will be in the church cemetery with full military rites.

And then the writer starts in on Tim. Right away, you get a sense of what Tim was like as a person: a crotchety old dude who never held back.

“Tim Schrandt (Lynyrd) made his last inappropriate comment on March 29, 2019. If you are wondering if you may have ever met him, you didn’t -because you WOULD remember. For those of you that did meet him, we apologize, as we’re sure he probably offended you. He was world renowned for not holding back and telling it like it is.”

Some people just seem like they were born in the wrong era. Tim was definitely one of those.

“Tim was born to William (Bill) Schrandt and Mary (Schrandt) Manning on June 11,1955 – 100 years too late. Given Tim’s demeanor he would have been the perfect weathered cowboy in the old west or rough and tough pioneer, or maybe he just should have been Amish.”

The obit moves on to Tim’s early life. From a young age, he was already showing signs of a rebellious streak.

“Tim was the 4th of 8 kids, the bottom rung of the top tier (the big kids). Instead of taking his place on that rung, listening to the older kids and doing as he was told by his older siblings, he decided to anoint himself “king” of the 4 little kids. Tim spent his childhood and early adulthood ordering them around and in general, tormenting them. He was a great orator, (not like Shakespeare, but more like Yogi Berra), as he always had something to say, and always had to get in the last word.”

“His position as ‘king’ and orator was challenged by the nuns at St. Wenceslaus school in Spillville. He may have met his match. We’re not saying the nuns won, but they put up a good fight, we mean literally – he got into a fist-a-cuff with a nun. In fairness, she probably started it. You didn’t take a swing at Tim and not expect one back.

Tim’s fondness for authority (his own – not others) followed him to South Winneshiek High School in Calmar and later into the Army. This provided for many interesting episodes and stories, detentions and demotions, and a few “run ins” with the law, not just locally, but globally.”

One last shout out to the coworkers!

“Tim worked at Camcar/Stanley Black and Decker in Decorah as a tool and die maker for 30 plus years. Tim worked with many friends and ‘a bunch of morons.’ His words, not ours. Well not exactly his, words because that would have included a bunch of swear words.“

Discussing what to do with the dead person’s possessions could be seen as crass and materialistic. Which is why Tim’s obituary does exactly that.

“Tim leaves behind a hell of a lot of stuff that his family doesn’t know what to do with. So, if you are looking for a Virgin Mary in a bathtub shrine (you Catholics know what we’re talking about) you should wait the appropriate amount of time and get in touch with them.

Tomorrow would be fine.”

Tim left behind a big family and many friends. Amid all the jokes, it’s clear they loved him.

“In addition to his stuff he leaves behind two great boys who he was extremely proud of, Cody (Jenny) Schrandt and Josh (Lydia) Schrandt were the product of his marriage to Crystal Hilmer. He will be missed by his two granddaughters that he adored and taught to cuss, Peyton and MacKenna. Also left to keep the stories alive (but damn, there won”t be any new material) are his mother Mary Manning and siblings Mike (Rita Dixon) Schrandt, Marty (Clint) Berg, Becky Schrandt-Miles, Bill (Grease) Schrandt, Pam (Rick) Barnes, Peter (Sandra) Schrandt and many nieces, nephews and cousins that wanted to hang out near him, because you just knew he was going to say or do something good. It’s not that he was such a great storyteller, it’s that he WAS the story!”

To his siblings amazement he was actually able to snag a good woman, Cheryl Murray, and hold on to her for the past 13 years, and as far as we know restraints were not used. Tim also created great memories and stories for Cheryl’s kids Alex (Christina) Murray and Samantha (Evan) Luedking and grandkids Tatum and Grace.”

Tim’s always gonna be Tim–even in the afterlife.

“He will be having a reunion with his infant daughter Ashley, his brother Duke, his dad Bill Schrandt, many aunts and uncles and a handful of cousins that passed before him. Tim was in charge of getting the beer and ice for our family reunions, so they will be happy to see him.”

Lots of obituaries say positive things about the deceased, and it’s easy to lean on the cliches. For Tim, that just wasn’t gonna cut it.

“A common line in obituaries is “He never met a stranger”, in Tim’s case he never met a rule he couldn’t break, a boundary he couldn’t push, a line he couldn’t cross and a story he couldn’t stretch. Another common obituary phrase is “He’d give the shirt off his back”, well Tim was prepared to do that, and he could do it quickly, because he always wore his shirts unbuttoned ¾ the way down. Tim was anything but common!”

Despite his crusty exterior, cutting remarks and stubbornness, there is actual evidence that he was a loving, giving and caring person. That evidence is the deep sorrow and pain in our hearts that his family feels from his passing.

Tim even managed to be funny about some of life’s most difficult subjects, illness and dying.

“Tim led a good life and had a peaceful death – but the transition was a bitch. And for the record, he did not lose his battle with cancer. When he died, the cancer died, so technically it was a tie! He was ready to meet his Maker, we’re just not sure ‘The Maker’ is ready to meet Tim.

Finally, many grieving families will set up a donation page to raise money for a cause the deceased felt strongly about. In Tim’s case, his biggest concern was for the brewery that would be losing its most loyal customer.

“We are considering establishing a Go-Fund-Me account for G. Heileman Brewing Co., the brewers of Old Style beer, as we anticipate they are about to experience significant hardship as a result of the loss of Tim”s business. Keep them in your thoughts.”