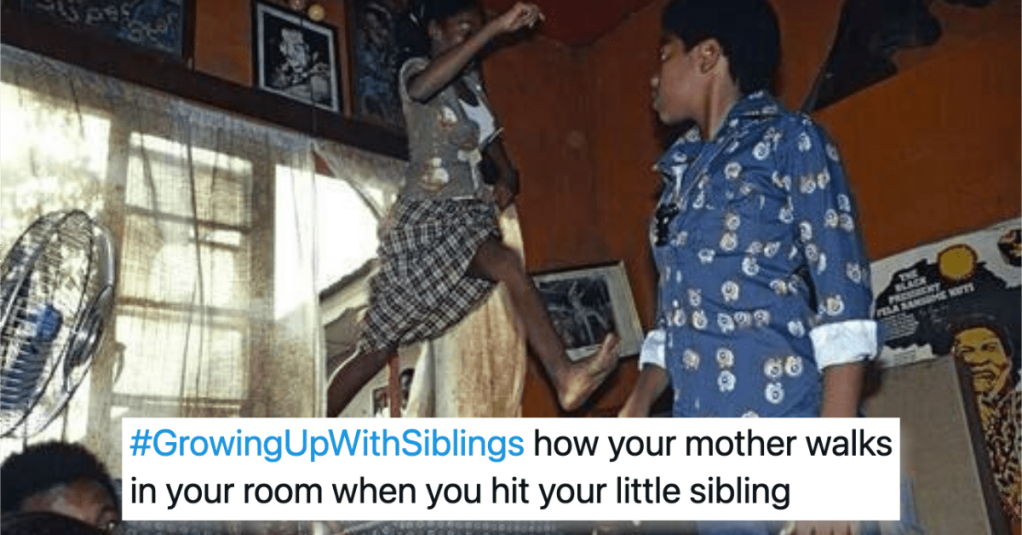 Funny Tweets About the Reality of Having Siblings

If you grew up in a house with a few kids in it (or more), you know what was going on behind those doors.

Alliances were formed, people argued and fought with each other, occasionally a soft drink was thrown in someone’s face during dinner.

It was a great time!

And underneath it all was one simple thing: LOVE. A very complicated and unique kind of love, but yes, it was still love.

Let’s look at some funny tweets about what it’s like to have siblings. And tell us if you think any of this looks familiar…

2. You’re going to need a lot of strength for this.

Sometimes, you just get pushed to the limit.

me trying to stop myself from killing my younger sibling pic.twitter.com/4YAZzPsY5f

3. That was resolved quickly.

Don’t forget about the names of the pets, too.

5. Funny how that works.

6. Put it all down in your little book.

#GrowingUpWithSiblings collecting receipts against them for when you need something pic.twitter.com/Ck12D0CouL

7. Good thing they’re not yelling at me.

#growingupwithsiblings when ur brother/sister is getting shouted at by ur parents & ur just there like pic.twitter.com/kFzeChD6aL

The trash can is literally two feet away.

#GrowingUpWithSiblings walking into the pantry, opening something and seeing this pic.twitter.com/4cVoLCVi7A

If you get caught in there again, you’re gonna be in trouble.

#GrowingUpWithSiblings Going through their stuff and hearing them coming up the stairs pic.twitter.com/9KyWDZZgN4

He hit me first!

#GrowingUpWithSiblings how your mother walks in your room when you hit your little sibling pic.twitter.com/Yq9ruTVvUj

12. Both of these look very familiar…

Say hi to your siblings for us!

#GrowingUpWithsiblings
when they suddenly start being nice to you pic.twitter.com/GWGgOFbOVZ

Do you have some sibling rivalry going on in your life?

If the answer is YES, tell us some funny stories in the comments.

We can’t wait to hear from you. Thanks!