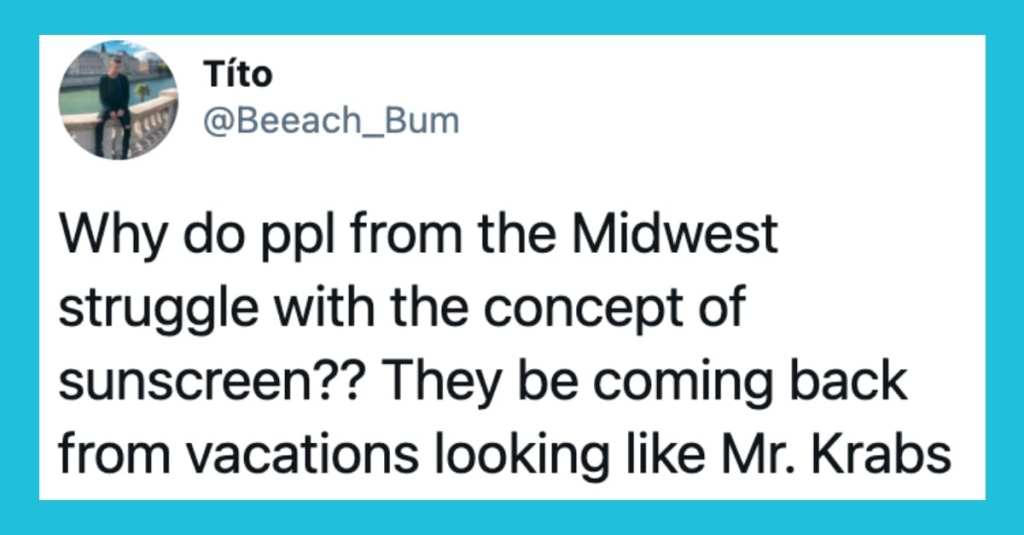 Funny Tweets About Midwestern Folks That Are Right on the Money

I no longer live in the Midwest, but I still have fond memories of spending a lot of my time growing up in Illinois and Kansas. There’s just something special and unique about that part of the country.

And, who knows, I might end up back there someday…you just never know…

If you’re from there, you know exactly what I’m talking about.

So let’s quit with the chit-chat and celebrate the Midwest, shall we? Enjoy!

I’ve seen it myself many, many times…

Why do ppl from the Midwest struggle with the concept of sunscreen?? They be coming back from vacations looking like Mr. Krabs

Don’t try to figure it out. It’ll drive you crazy.

3. Bacon is life in the Midwest.

And don’t you forget it!

It’s the guiding light for everyone.

You gotta get on board with this one!

Why does everyone in the Midwest have a pair of roller skates? Someone buy me a pair

6. It’s a staple of every household.

Brings back a lot of memories.

This clock is in every Midwestern
home pic.twitter.com/y4Cpyr1m3P

So don’t try to hurry us!

WHY DOES EVERYONE WALK SO SLOW IN THE MIDWEST

No explanation for that one.

Why do people in the Midwest pronounce the L in egg yolk!?..weird..

Midwest goodbyes are 45 minutes of continued conversation while your hand is on the doorknob in the tiny entrance area and hugs and kisses have already been given.

Even if it’s a five-hour flight.

Nothing to worry about!

Midwest culture is hearing the tornado sirens going off, checking the news station, and still not going into a basement or shelter area until you hear a tornado knocking on your door asking for some sugar.

You don’t even need a jacket.

Hey o! Those are great!

We could all use a little bit of laughter right now, don’t you think?

And now it’s your turn, amigos.

In the comments, share some more funny Midwestern observations with us. We’d love to hear from you!