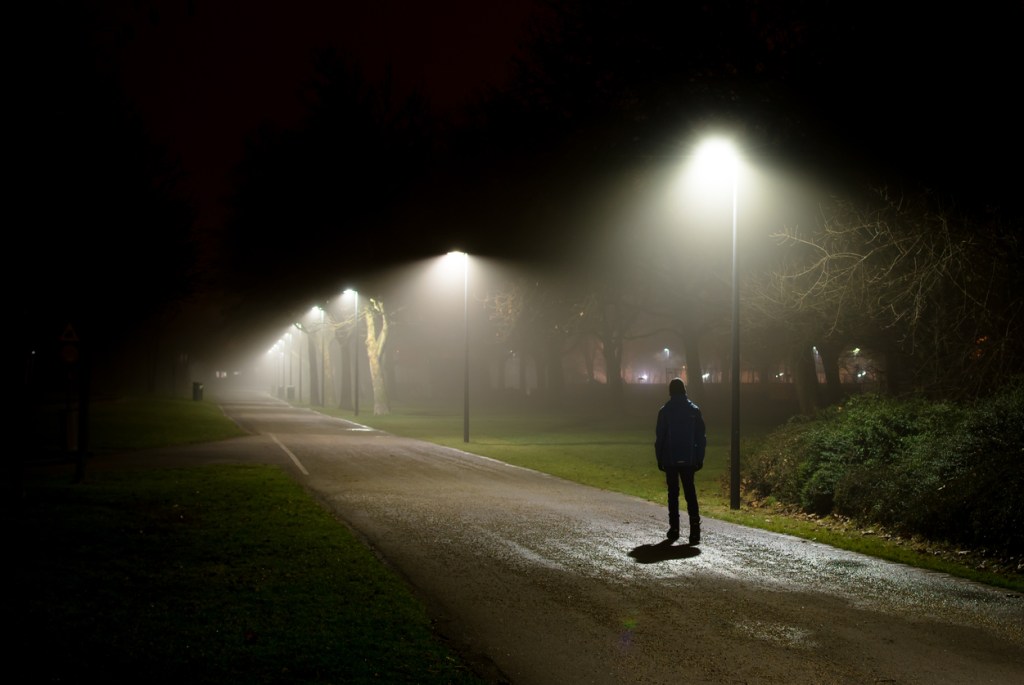 Did you ever see something so freaky, so terrifying, that no one believed you? Something that made you just up and leave as fast as you possibly could?

#1. Lions And Tigers And Bears, Oh My

“I spent a lot of time in the woods building forts as a kid with friends. Saw a bear once and a mountain lion on more than one occasion. I was in central Illinois and both are supposed to be no longer in the area and haven’t been for some time.”

“I was watching a meteor shower and saw a “meteor” take a sharp 90 degree turn.”

“My brother and I were in San Francisco for a vacation and were planning to go explore Chinatown. As you may or may not know, there are usually very prominent Chinese mob presence in large American Chinatowns. Now getting to the story: Me and the bro are strolling through Chinatown, having a great time, when we both happen to look down this small alley. And I shit you not, there were two Chinese men in suits holding another man who looked beaten up. One of them opened a door to a building and the other pushed the man inside and closed it. They proceeded to leave. Being intrigued as fuck, we stayed around for awhile, and about 5 minutes later 2 men walked out, 1 carrying a large duffel bag, the other putting away a handgun into his jacket. We called the police and reported a murder in Chinatown and quickly left. 1 day later, we got a call from the police asking a few more questions and they said thank you and hung up.”

“Another car with the same license plate as mine.”

#5. Creeper in the Window

“I was spending the night at my Father’s house, (same one I grew up in), and was sleeping in my old room. I was dead asleep, when a noise from outside in our carport woke me up. I thought someone might be breaking into my car. I got up went to the window that looks out at our porch and front door. I pulled the drapes back and peered thru the mini-blinds. Now I am a retired Deputy and not much ever fazes or startles me, but when I put my face to the window to get a good look outside, SH#T, someone was looking right back at me. Our eyes were locked on each other. It did in fact raise the hairs on the back of my neck. The eyes reflected and glowed, I saw the outline of the guys face. I could not move. Was thinking of a lot of things in a short time, like how did this guy know I was there looking out the window and also if he saw me too. After about was felt like minutes, my brain woke up. The adrenaline kicked in after jumping out of a deep sleep. I realized I was looking at my own reflection in the window. Could not stop laughing, “what a dork!”.”

“I used to take a shortcut through a field to get to work (I live in Ireland) anyway lying in the middle of this field was a dead penguin.”

“Alright so I’m coming back from Daytona beach (for those of you who live around I’m taking 415) alone, its around 2 am. Im the only one on the road. Im also starting to get bored. When the fuck out of nowhere I see a dog standing in the road. I literally stop within feet of him. I lower my radio and i hear him just barking over and over. I can still remember the pattern. Well I’m tapping the horn so he can gtfo out of the way. When I hear a knock on my passenger window. It made me jump and let out a whimper that scared me even more. I look back and my brake light illuminates what looked like 7-10 people crowding my car. I NOPED the fuck outta there, whipping around the dog. When i got home i thought what my night coulda been. Or if it was just my imagination. Looking back i don’t even remember what the dog looked like.”

#8. “It looked like a coyote but was walking on its hind legs…”

“I went camping when I was 17 with my friends and the ROTC instructor from our school. The guy was 53 and the biggest badass I have ever met, tough as nails. Well, we are coming back from town and driving down this long dirt road in the mountains. My friends and I were in the back of his truck and he slammed on the breaks. We look over the top of the cab and this animal was walking across the road. It looked like a coyote but was walking on its hind legs. After it crossed, it let out this god awful screeching sound. When we got to the camp site, the ROTC guy made us pack up and leave. He has been all over the place with the army and has seen some crazy shit, but whatever we saw scared him to his core.”

“There’s a “haunted house” in my hometown that everyone in high school goes to get scared. Anyways onetime my best friend and I went up there and as we were walking towards it the side door flew open and a man shaped figure ran out. As it got to the edge of the yard it got on all fours and ran out into the desert. I never will go there again.”

“Went to a movie and the projector broke. Me and my friends left and I had a flash of a car accident in my brain. I told them jokingly. 10 minutes later we were T-boned by a drunk driver. Still barely believe it myself. But it is true.”

“Ok, while fishing off a dock in Florida, I saw a massive, whale-like fish swim under the dock. It was brown-ish and I’d say about 25 feet long, with a tail parallel to it’s body (like a whale), propelling itself along slowly. No one in my family believed me, and I looked up a list of large fish common to the area and couldn’t find one that even came close to matching what I’d seen. I was about 11 at the time.”

“I once had a dream in 4th grade that I woke up from bed, got dressed, and continued on with my day in the dream, and then saw a black van zooming towards me and then I woke up. Same exact small events happen in the real day, and a black van zooms past me right as I was going to cross the street. This affected me throughout the 4th grade, and I barely talked to anyone. I was too amazed and horrified about the theory that I just died and “respawned” like in a video game. I still freak out when I think about it.”

“I was once being driven back home from a fair type thing at an old castle by some family friends. I remember us driving through a village that was full of mannequins. Like a woman pushing a pram, a worker fixing a telephone line, milkman, postman knocking on doors. 100s of them, all fixed, motionless, and quiet as anything. We passed through it in a few minutes, but I remember nobody really talking about it, and when I asked them about it a few years later, they said they didn’t remember. I think it may have had something to do with military testing/simulation, as there was a base not too far from where we were, but it has freaked me out to this day.”

“When I was in the third grade I had a best friend named Austin Turner. He was always there for me as I was bullied a lot through the third grade. Anyway, he was new to our school that year and him and I hit it off, talking about the same stuff, etc. We ate lunch together and were the only two people that sat with each other. He was an odd kid for sure, as in he was quiet and seemed to only talk to me. He had a very distinct laugh that just made me happy. Anyway, at the end of my third grade year he told me he was moving to Florida. I gave him my home phone number and told him to call me if he was lonely. One day in the middle of my fourth grade year my mom answered the phone and said it was for me. Austin was there and said that he was enjoying his new school and made a couple of friends and all that. We said goodbye, and the next day I redialed his number to call him back. A woman picked up the phone. Thinking it was Austin’s mom, I asked to speak to Austin. She said there was no one by that name there. I asked if she was Mrs. Turner and she said yes. Confused, I asked for Austin again and asked if she was Austin’s mom. She said that she didn’t have a son and wanted to know who I was. I told her that I was from my town, Cynthiana and she said very seriously “we just moved from there, me and my husband. How did you get our new number already?” I apologized, hung up the phone and never called back or have heard from Austin not his family again.”