Sometimes, a well-known artist decides to shake things up and try something completely different than what they’re known for. Think Bryan Cranston transitioning from goofy comedic characters to Walter White. And when it works, it’s a truly impressive accomplishment.

But more often, these would-be groundbreaking projects are total flops, and today’s article is about an example of the latter.

It was 1939. A few years earlier, Theodore Geisel aka Dr. Seuss had published his first children’s books, The 500 Hats of Bartholomew Cubbins and And to Think That I Saw It on Mulberry Street. Vanguard Press was Dr. Seuss’s first book publisher, but in 1939 he switched to Random House. One condition of this switch that Dr. Seuss got Random House to let him do one book for adults.

That adult book was The Seven Lady Godivas. In it, Dr. Seuss tells the story of the seven Godiva sisters, all of whom appear naked throughout the book. Their father has just died in a horse accident, and the sisters vow to not marry until they have each learned a valuable lesson about the nature of horses.

If that sounds bizarre to you, know that Dr. Seuss probably felt the same way. He later said, “I attempted to draw the sexiest babes I could, but they came out looking absurd.” Even better, on the very last page of the book, Dr. Seuss pays tribute to his Random House publisher, Bennett Cerf…by putting his name on a bucket of sap, implying that Cerf was being too nice in allowing the book to be published. The book was a total flop and only got reissued in 1987 because Dr. Seuss’s other books were so successful.

The book is mostly forgotten, but luckily for you, I’m going to take you through the whole thing RIGHT NOW! 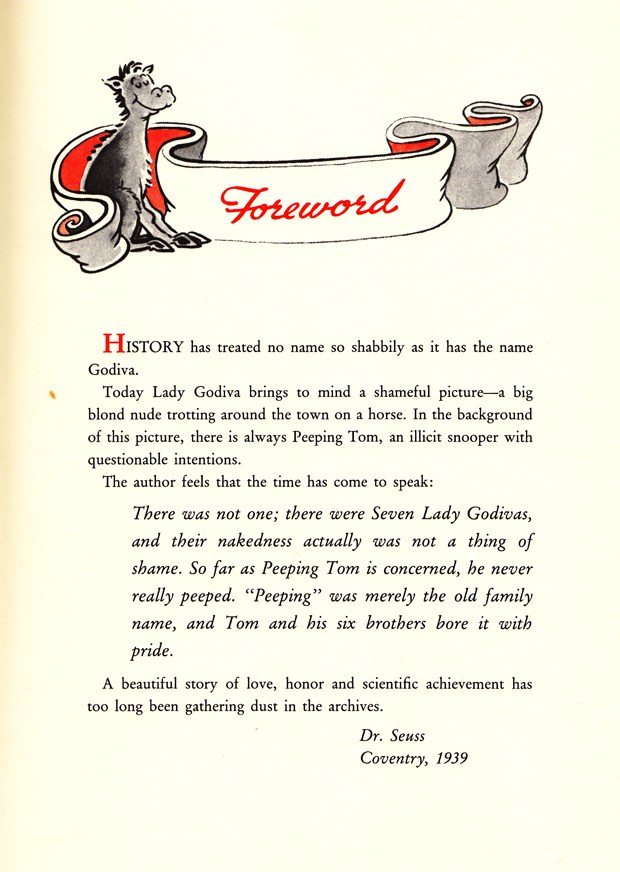 Well this is interesting. I always thought “reboots” of beloved characters were something that only started happening in the 2010’s. Not so! Maybe this is going to be a dark, gritty version of Lady Godiva, kinda like Christopher Nolan’s Batman. 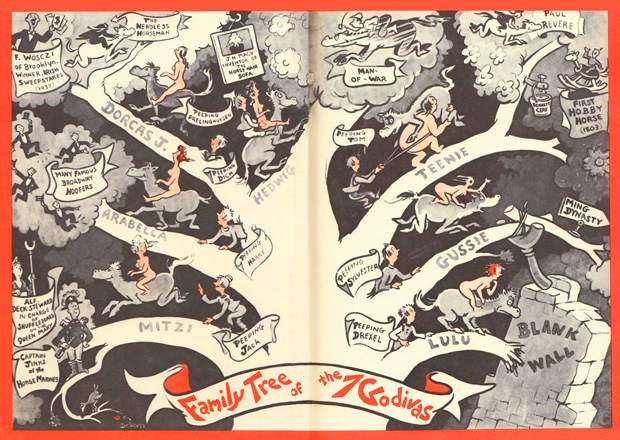 Right now you may be thinking “Wait, there were SEVEN Lady Godivas???? I thought there was just one!” And you’re correct! The “real” Lady Godiva was a 13th century countess who stripped naked and rose through town on horseback to protest her husband’s refusal to raise taxes.

This family tree is the most Dr. Seuss thing ever, and it’s why he had the nickname “Guy Who Doesn’t Need LSD Because His Brain Already Does That For Him.” 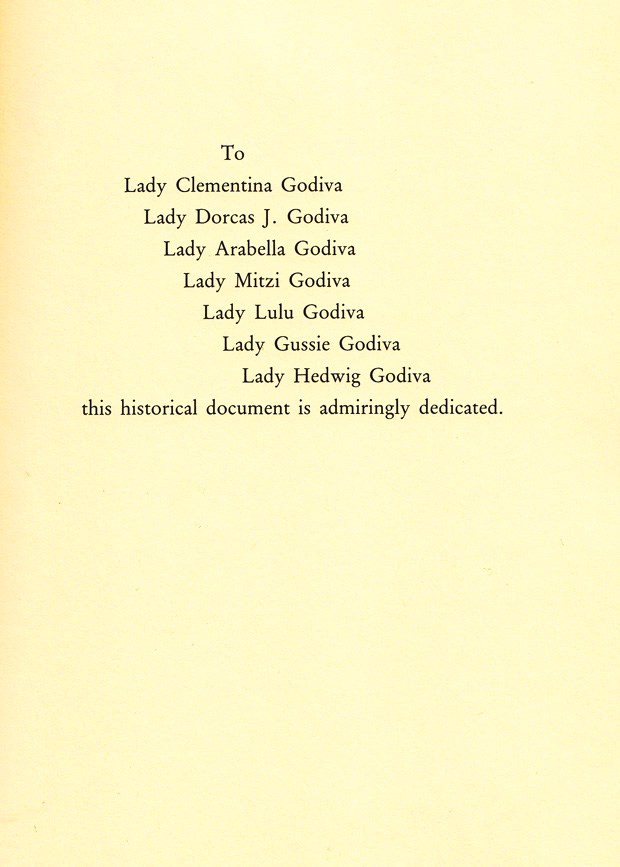 And here are the names of the seven Godiva sisters. It might seem like most of these names are pretty clunky, but the book takes place in 1066. That’s a good couple centuries before acceptable girls’ names were invented. 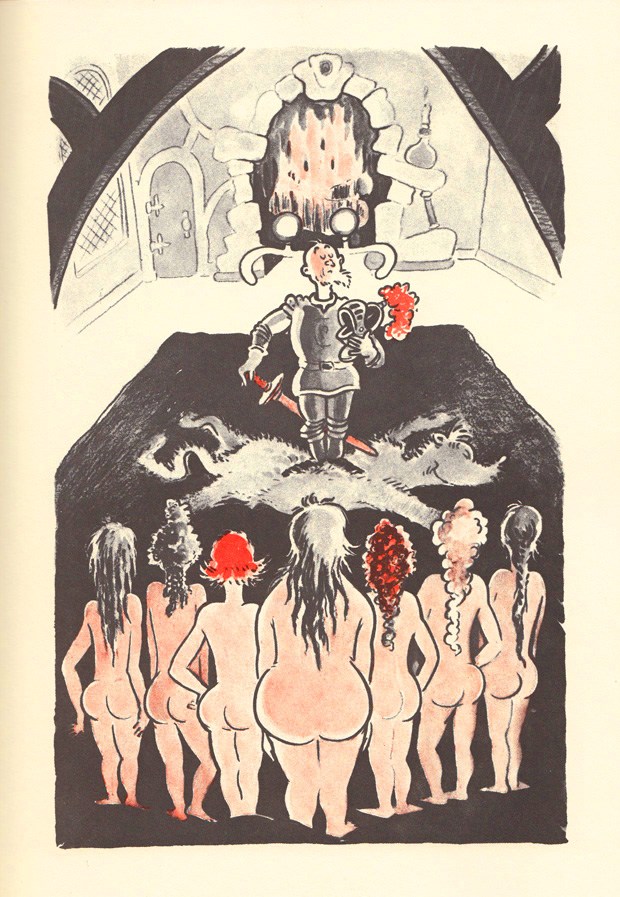 And now the book begins. Lord Godiva, the girls’ father, is about to leave on horseback for the Battle of Hastings. The girls are horrified, not because he’s going to battle, but because he’s about to ride on a horse. You see, at this time horses were a misunderstood and dangerous mode of transportation, much like Segways are today.

What’s weird to me is how Clementina Godiva (aka the one in the middle), doesn’t have a butt crack. What, was it OK to show butt crack in 1939 as long as it was at an angle? 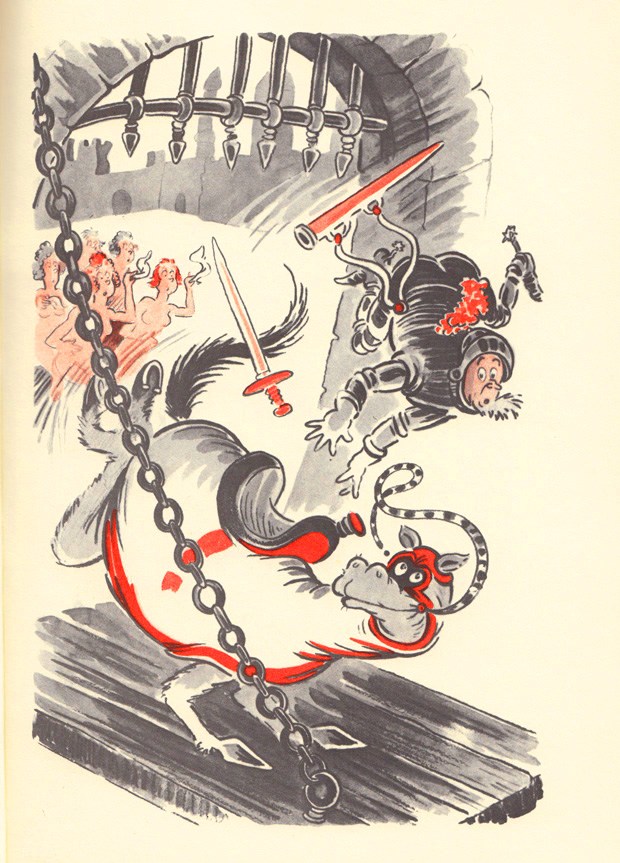 Aaaaaaand mere seconds after leaving the castle, Dad’s horse throws him, and he dies.

If you think this is sad, and not SUPER embarrassing, picture this scenario. It’s 2017, and your father just pulled out of the driveway, crashed his van into the mailbox, and his car somehow exploded. You would say, “That wasn’t my dad. I was adopted.” 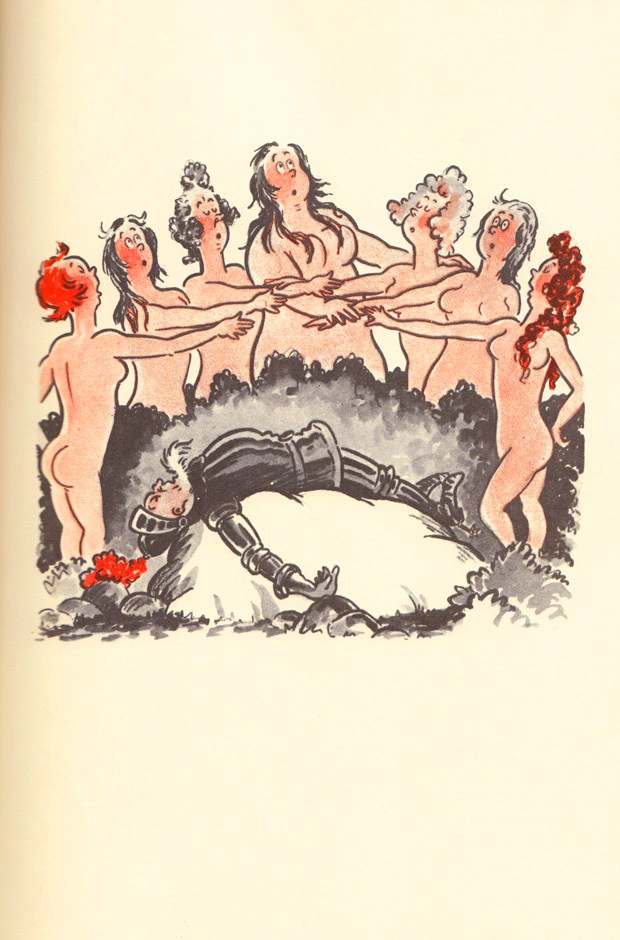 “Sorry, Dad. I wanted to buy you a real coffin, but Gussie and Dorcas said we could just put you on a rock. They don’t love you as much as I do.”

Anyway, while burying Dad, all seven sisters simultaneously have the same realization: this wouldn’t have happened if more was known about horses! They lock hands and swear a vow: “I swear that I shall not wed until I have brought to the light of this world some new and worthy Horse Truth, of benefit to man.”

Clementina, the oldest Godiva sister, gets a blank book and chains it to the horse stables for each sister to fill with horse knowledge. For the rest of the book, the sisters have a series of horse-related adventures that each lead to the creation of a popular phrase like, “Don’t look a gift horse in the mouth.” 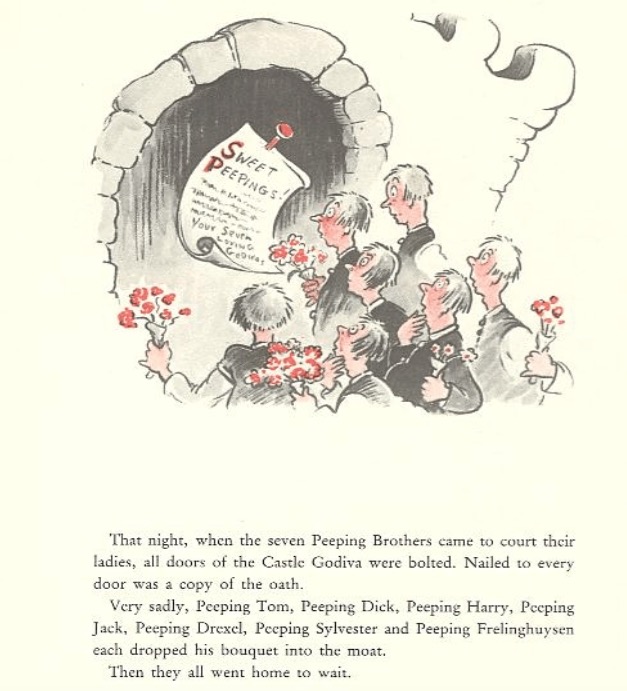 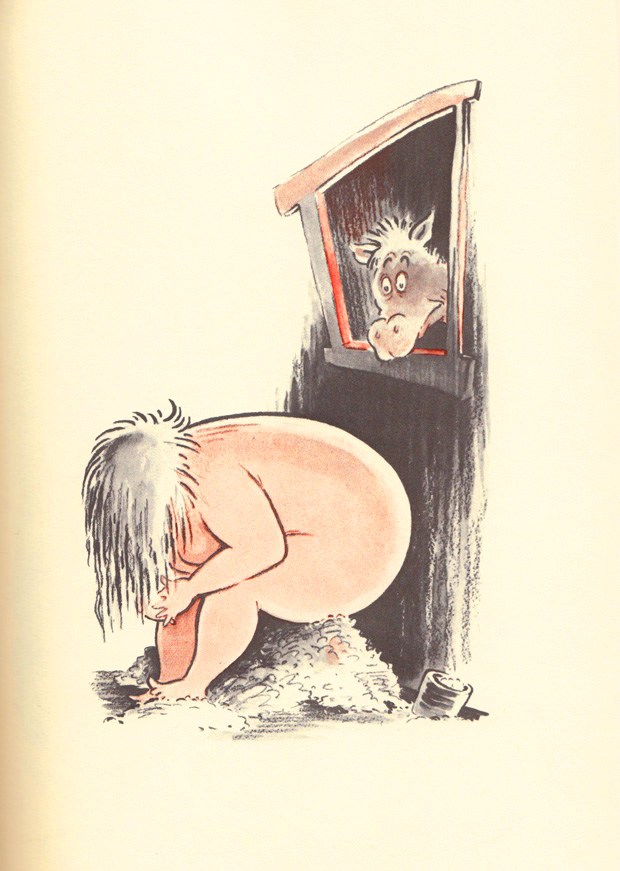 OK! We’re ready to start learning about horses, and right away we run into problems. Six of the sisters go off to ride horses, but Clementina, aka “Teenie,” is left out because, get this, she’s too fat to ride a horse. That’s literally what the book says. Remember, this was written in 1939, when our national past-times were baseball and fat shaming 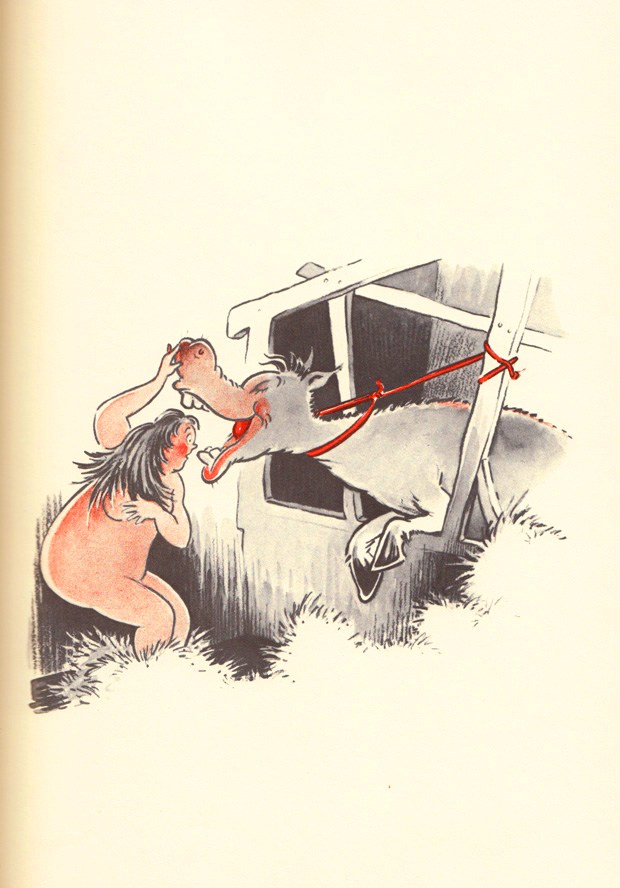 So what does Teenie do? While hanging around the barn, she notices one of the horses yawning a lot, so she looks in its mouth, and the horse bites her nose right off.

I TOLD YOU THIS WASN’T A BOOK FOR CHILDREN! (Sabbath rules.)

And this is how the phrase “Don’t look a gift horse in the mouth” was coined. (The gift part comes in because the horse was a gift from some uncle of theirs, and it doesn’t factor into the story.)

We’re only one lesson in and we’ve already had a horrible disfigurement. But actually Teenie is thrilled because at least now she can have sex. 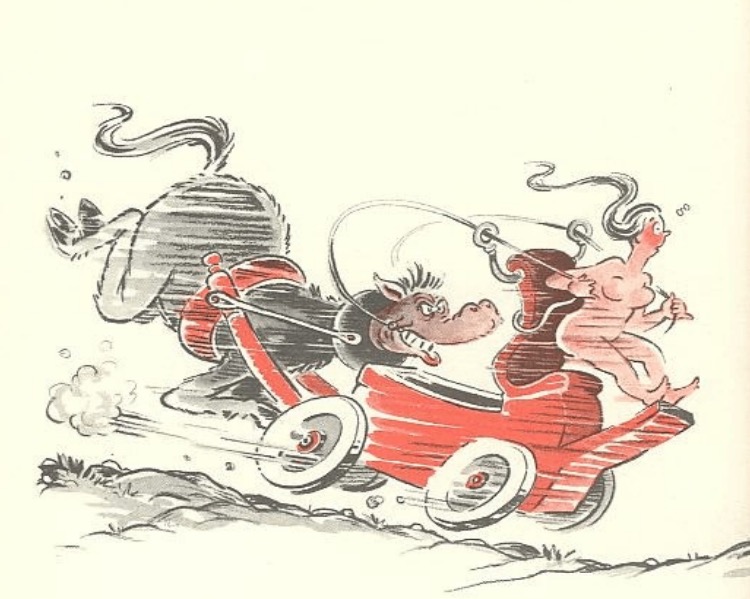 Dorcas is up next. She watches a horse pull a cart through the town and thinks, “Hey, what if the cart were in front of the horse instead?”

So, she literally puts a cart in front of the horse, and as you can see, the horse hates it. The horse gets so mad that he purposely crashes into a tree and kills himself to escape his living nightmare of a life.

I wish I were kidding.

And if you think that’s enough animal torture for one book, just read on to the next lesson! 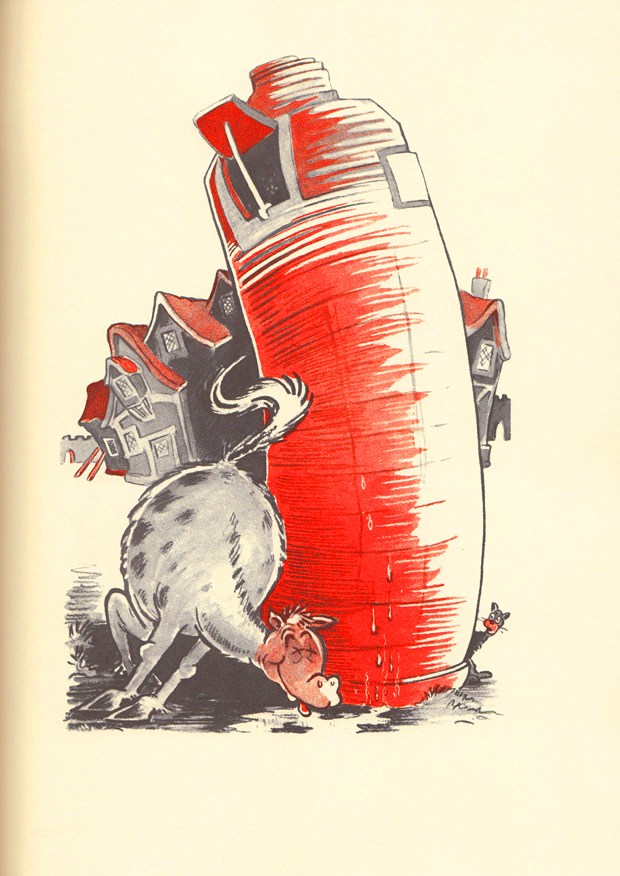 Why is the horse drunk? Because Arabella Godiva, the third sister, has been working him so hard that it literally drives him to drink.

No, really, just look at this page from the book: 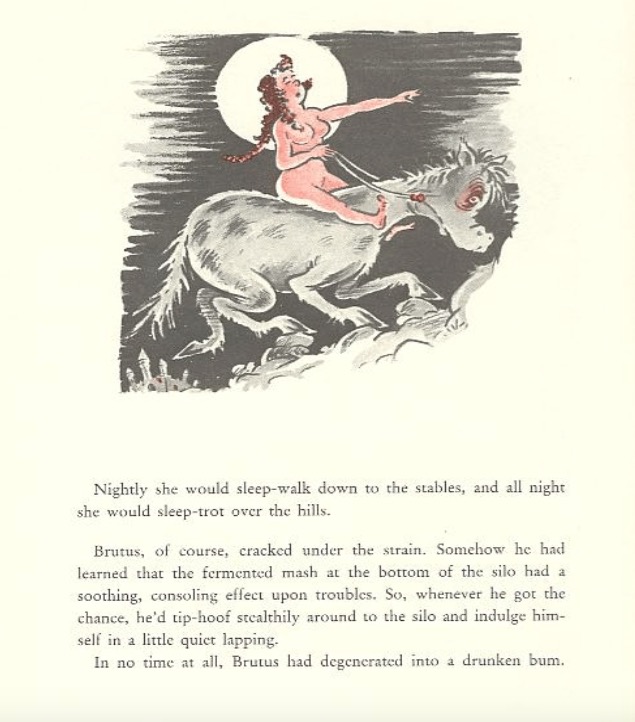 I feel so bad for Brutus!

Now, what lesson could we learn from this, hm?

12. Horse Lesson #3: You Can Lead A Horse To Water But You Can’t Make Him Drink 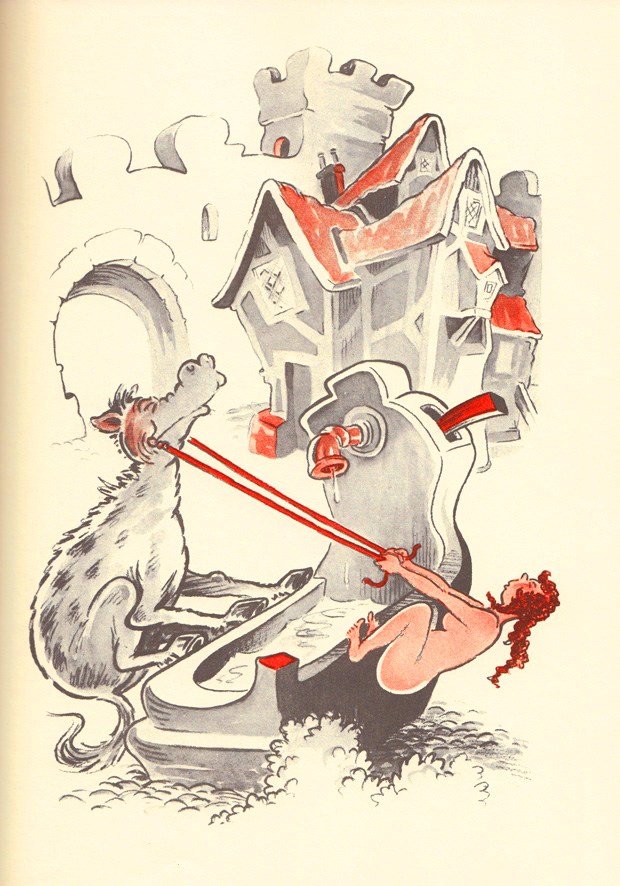 Wait, what?! The only acceptable lesson Arabella can learn here is “Don’t be so mean to your horse that he becomes an alcoholic.” But no! Once Arabella learns about her horse’s problem drinking, her solution is not to change her own behavior, but to try to get him to switch to water. But the problem is, Brutus has gotten so used to booze that he won’t even touch the water. 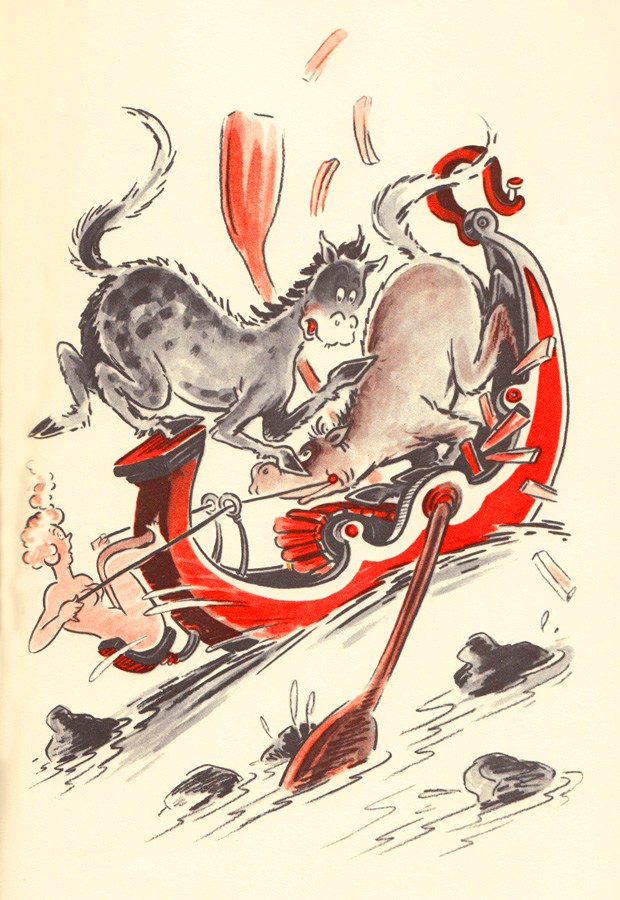 The fourth Godiva sister, Mitzi, gets a letter from her fiancee Peeping Jack, asking for an update. Jack is also a sailor, and this gets Mitzi thinking about the concept of “sea horses.” From this, she starts to wonder what would happen if you put horses on boats. She builds some sort of boat treadmill for horses, but surprise surprise it sinks. 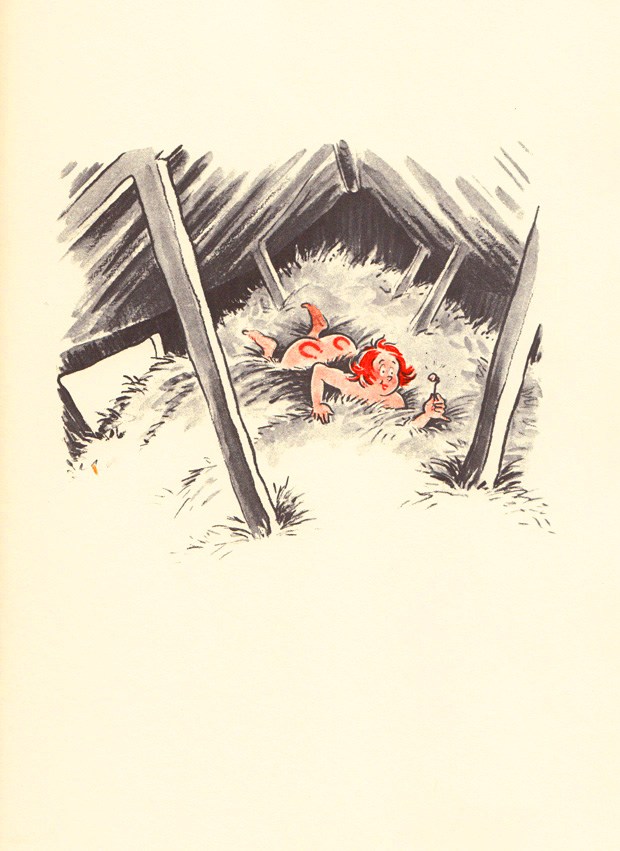 Just l0ok at the illustration on this one and tell me what you think it means. My first thought was, “Finding a needle in a haystack isn’t so hard if you let a horse feel you up first.”

The truth is so much worse.

In Lulu Godiva’s chapter, she immediately gets kicked by a horse and send flying into a haystack, where she lands on a missing diamond pin from her fiancee Peeping Drexel. Her conclusion from this experience is inexplicably that “horse shoes are lucky.”

Yep, that’s it. Not even a horse saying like the other ones. I get the feeling this is where Dr. Seuss realized that seven was too many sisters for this book.

15. No, The Worst Godiva Sister Is Hedwig 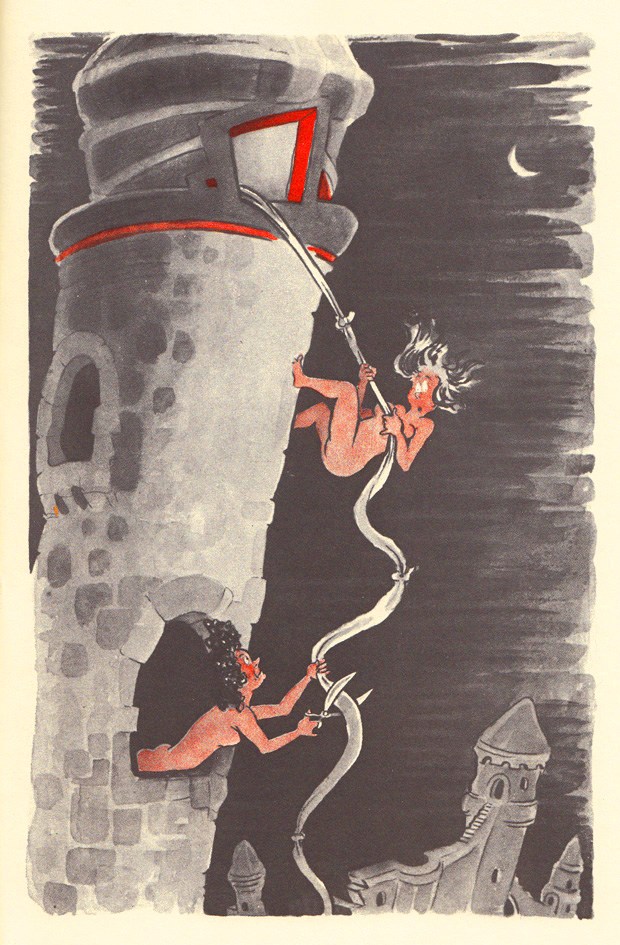 Now it’s ten years since Lord Godiva died, and Gussie Godiva is so desperate to get laid that she decides to sneak out of the castle and visit her fiancee Peeping Sylvester for medieval Netflix & Chill.

Unfortunately for Gussie, her sister Hedwig catches her and makes her go back to her room. No sex until you’re done with your horse lesson!

Hedwig might be the most evil villain in Western literature.

But anyway, to placate her jerkwad sister, Gussie gives us the most half-assed lesson in the whole book… 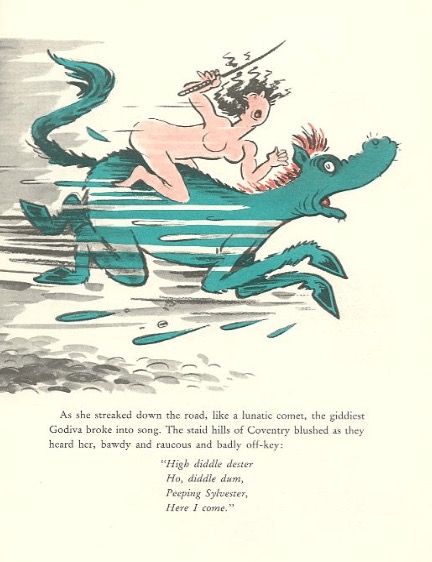 I’m sure you did, Gussie!

This page is right after Gussie, in response to Helga’s awful cockblocking, paints her horse green and rides off to Sylvester’s place.

You know what, I’m going to ahead and revise Horse Lesson #6: If you haven’t had sex for many years, you’ll do anything to get laid, even paint a horse.

And now we’re down to the final Godiva sister, Hedwig…

17. Horse Lesson #7: Don’t Lock The Barn Door After The Horse Has Already Been Stolen 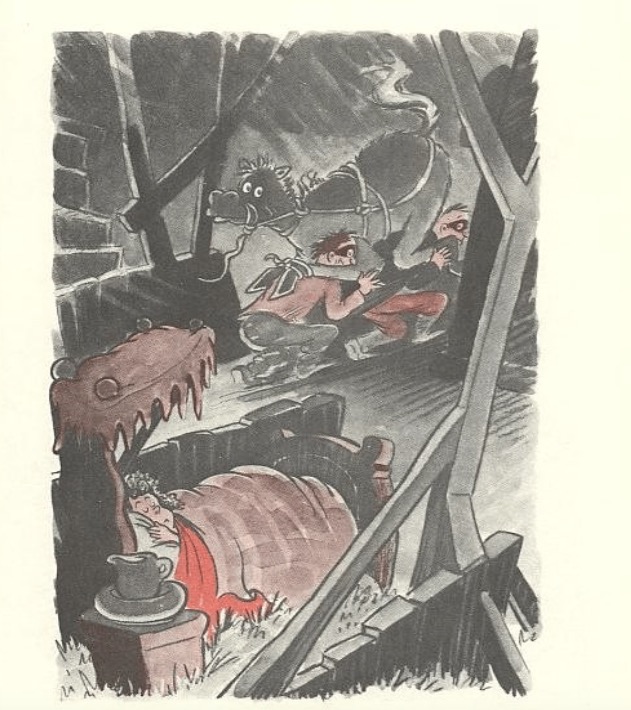 The one word to sum up Hedwig is “dedicated.” The book has another time jump, and this time Hedwig is 70 years old. (But drawn the same way as when she was in her 20’s.) She and her fiancee Peeping Frelinghuysen are STILL unmarried, STILL have not had sex, and Hedwig is down to one surviving horse, Parsival.

Parsival gets deathly sick, so Hedwig must nurse him back to healthy. Which, despite limited veterinary skills, she does! Yay!

And then that night, while Hedwig is asleep, horse thieves break in and take the horse. So what does she do? 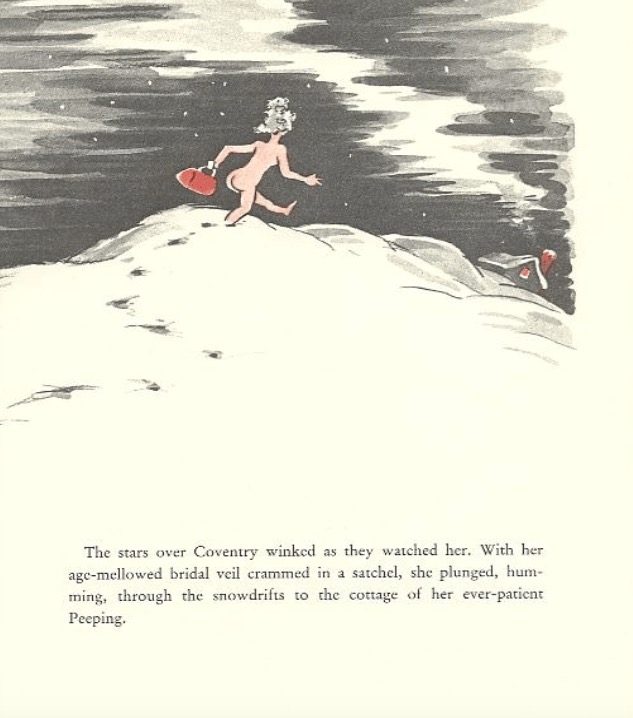 She bails. Because if you’ve just wasted 50 years not learning about horses, you’ll walk miles through the snow in your bare feet just to get some of that D.

You Can Now Buy A Chocolate Mold Of Your Lover’s Anus. I Repeat, Your Lover’s Anus.
These Millennial Merit Badges Are 100% True…And Hilarious
16 Bizarre Works Of Manscaping
15 People Share Their Worst Wedding Fails
These 15 People Were Hell-Bent on Revenge
17 Things That Really Did Not Age Well