Peppa Pig is a cultural juggernaut. The UK-based children’s show, which follows a talking pig and her animal friends, has been airing since 2004 and it’s been a hit on both sides of the Atlantic. Peppa is so successful, she’s even affecting the way our children talk. According to parents around the US, their little Peppa fans have begun speaking with a British accent, all thanks to the show.

Lots of parents have noticed “The Peppa Effect,” but Janet Manley over at Romper gave the phenomenon wider attention a few weeks ago. When Manley’s daughter was 20 months old, the family flew to Australia for a trip. Manley’s daughter binged several Peppa episodes during the 21-hour flight, and by the time they landed, she was speaking “Peppa English.” Two years later, she still refers to Manley as “Mummy,” and finishes her sentences with a snort. 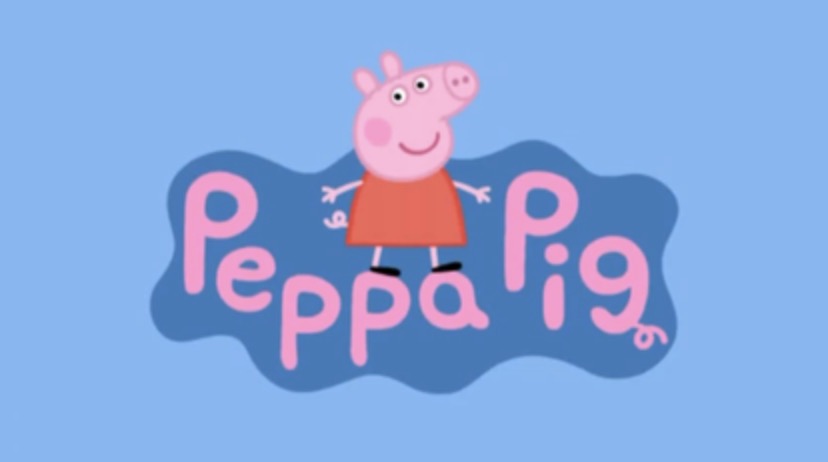 S0, is an entire generation of American children going to grow up speaking like a cartoon British pig? Not exactly. Since the story first broke, linguists have stepped in to clarify things. While it’s true that a child’s accent does develop at around 20 months old–the age of your average Peppa viewer–it’s not going to come from a TV show. “Typically, you would develop the accent of the community around you,” says Dr Susannah Levi, an associate professor of communicative sciences and disorders at New York University. “You will learn the dialect that’s around you, which is learned by interactions, not by watching.”

American kids aren’t going to have permanent British accents from watching TV. It’s much more likely that kids are simply mimicking Peppa’s accent, because they like it. “Kids at that age are certainly aware of those types of differences and can mimic them, too,” said Dr Lisa Davidson, a professor and chair of linguistics at New York University.

“The Peppa Effect” might not be permanent, but it’s very noticeable. Since Manley’s piece went viral, parents around the country have been sharing examples of their children’s adorable British-isms. 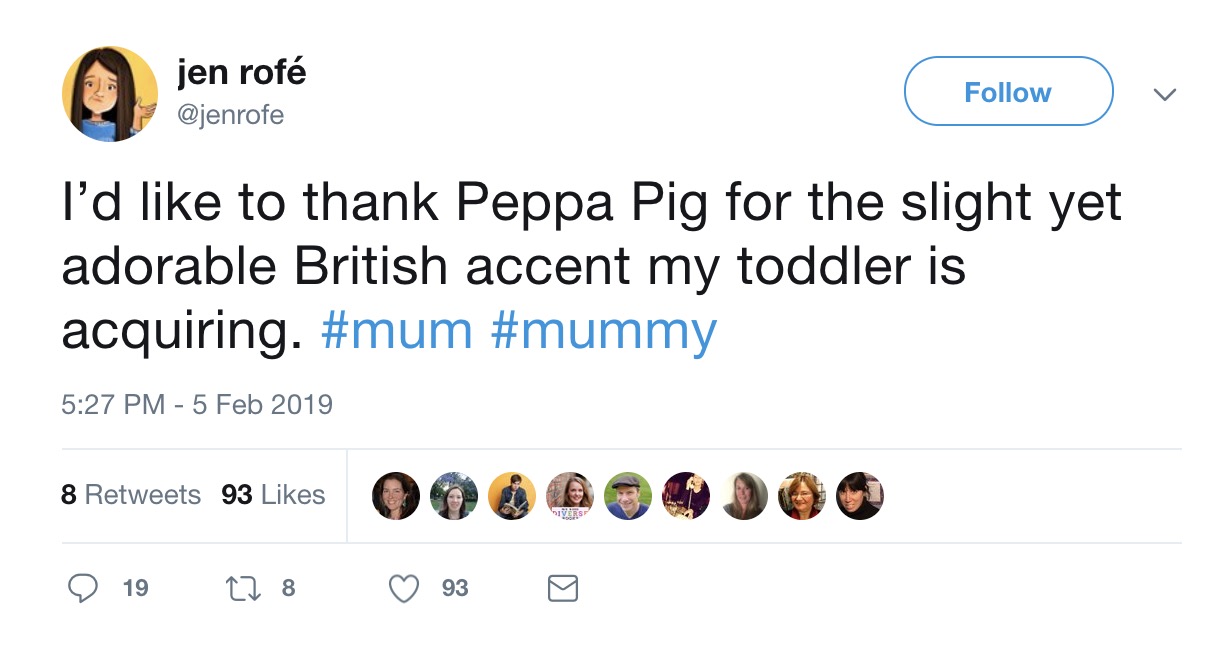 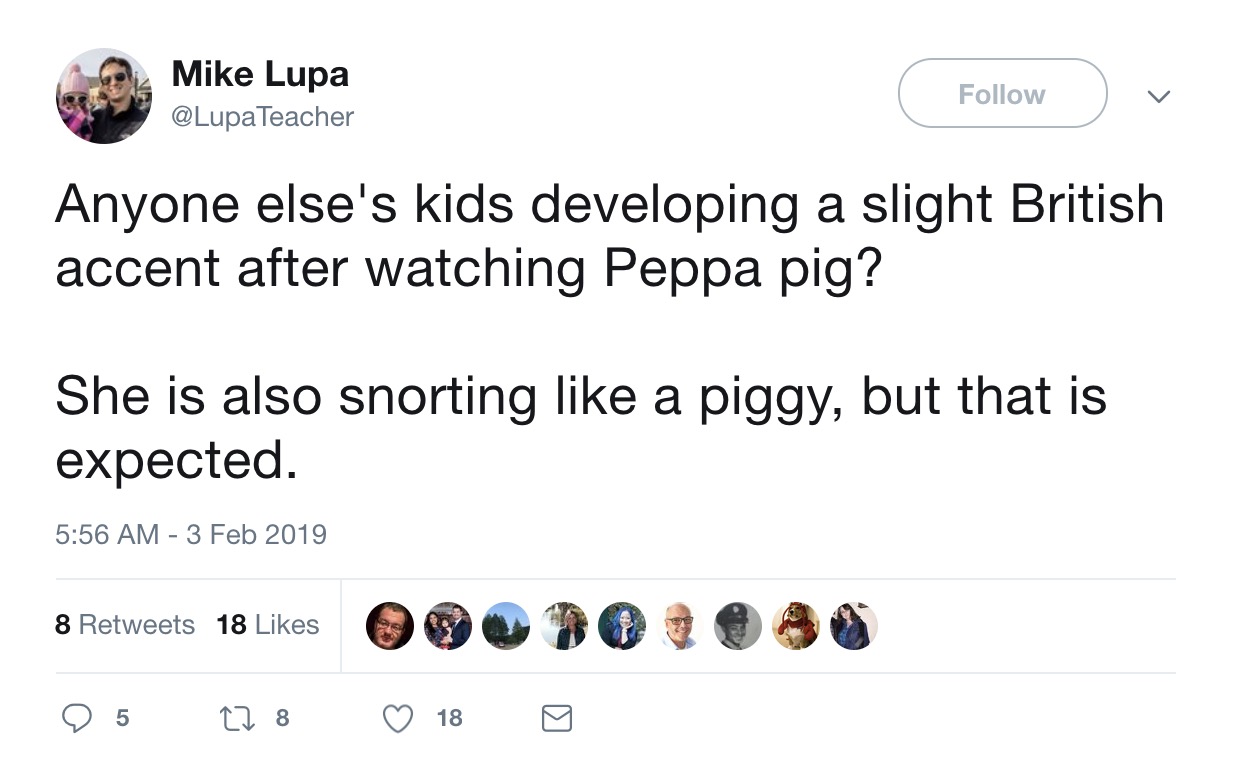 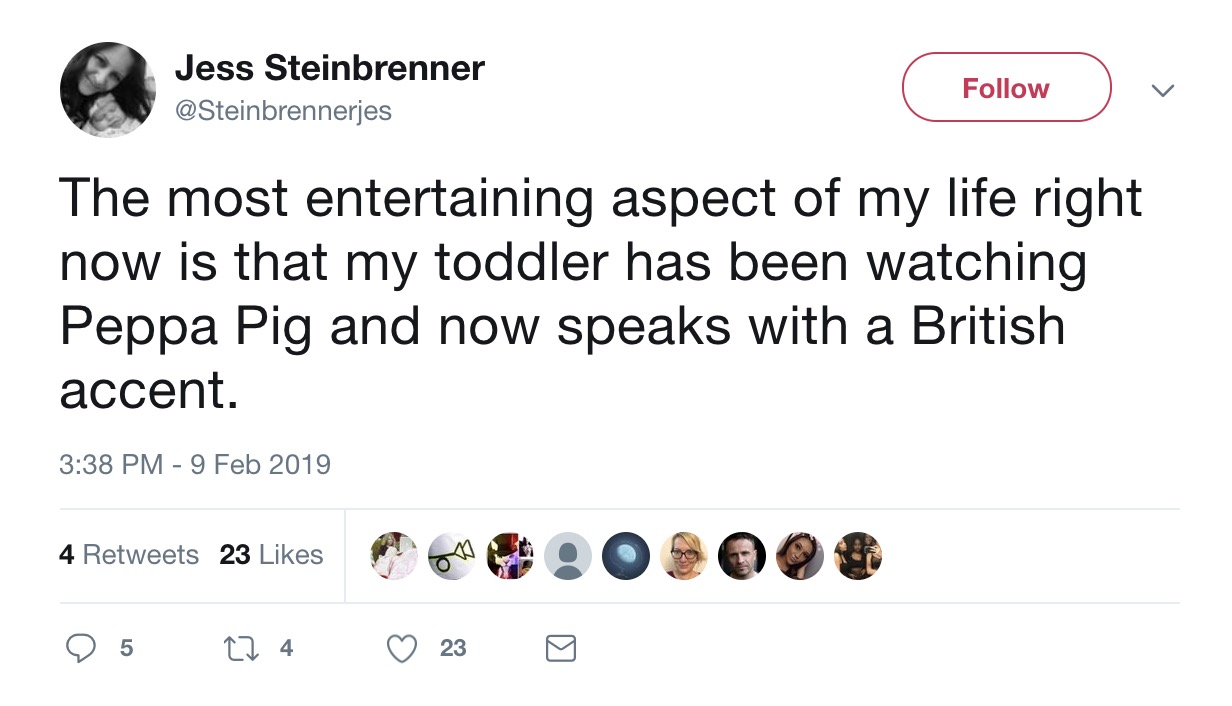 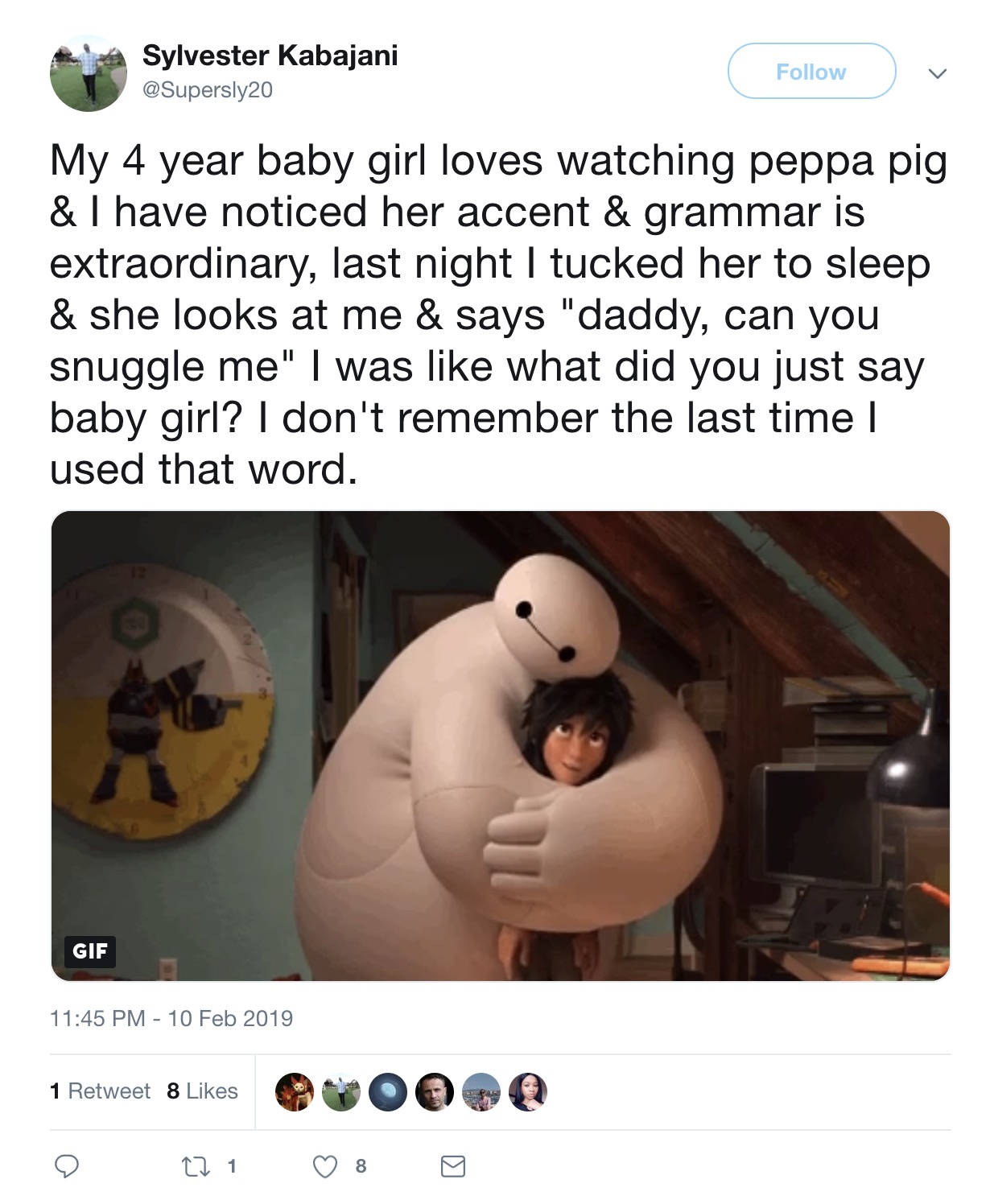 Some parents were less amused with the development and more concerned that their kiddo might be getting too much screen time. 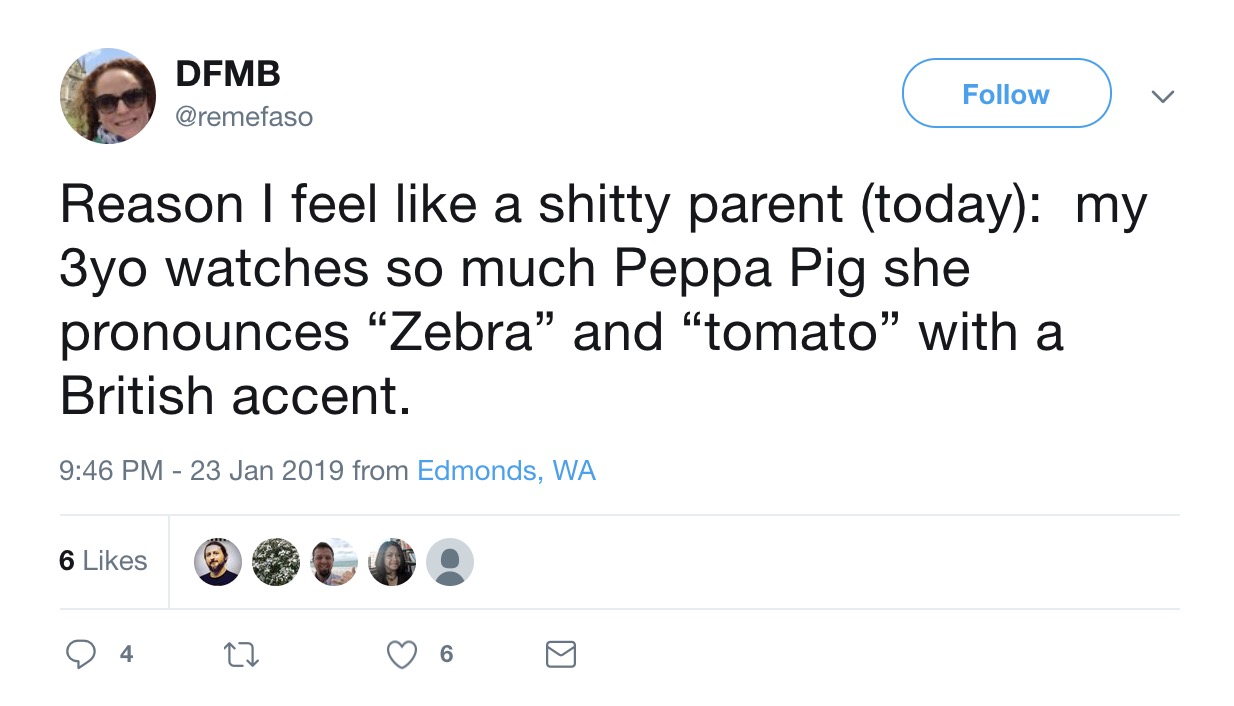 Other parents are actively seeking out The Peppa Effect. 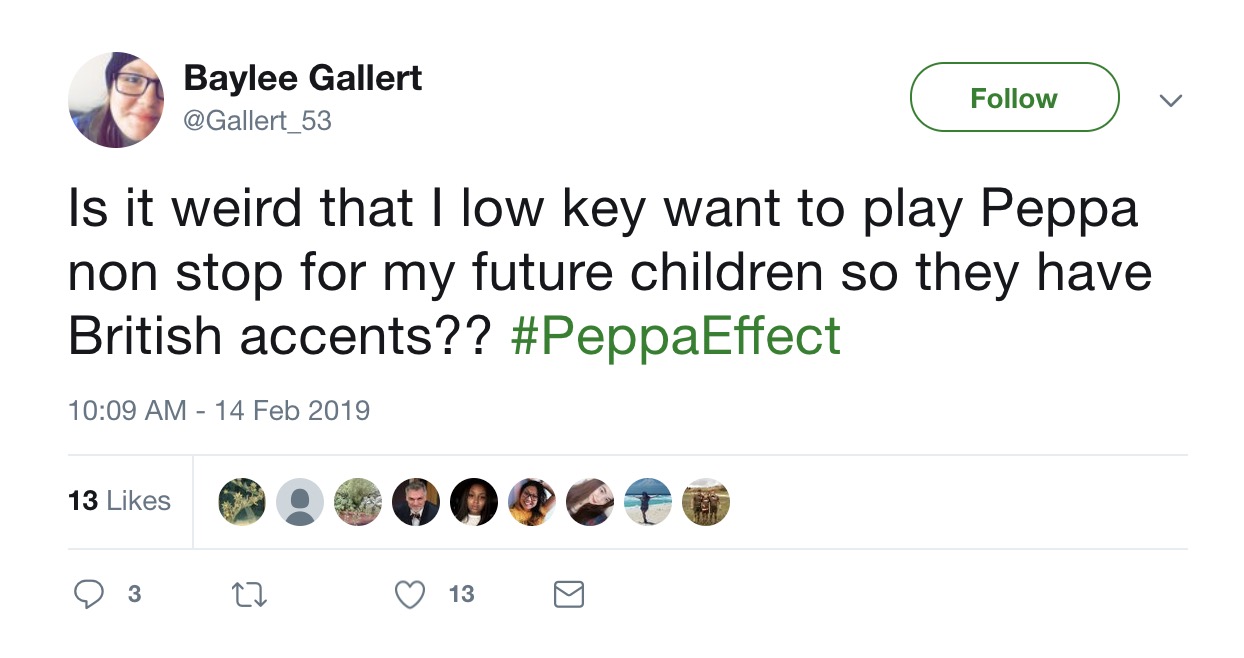 This phenomenon isn’t limited to Peppa Pig, either. Lots of British children’s entertainment can have this effect. 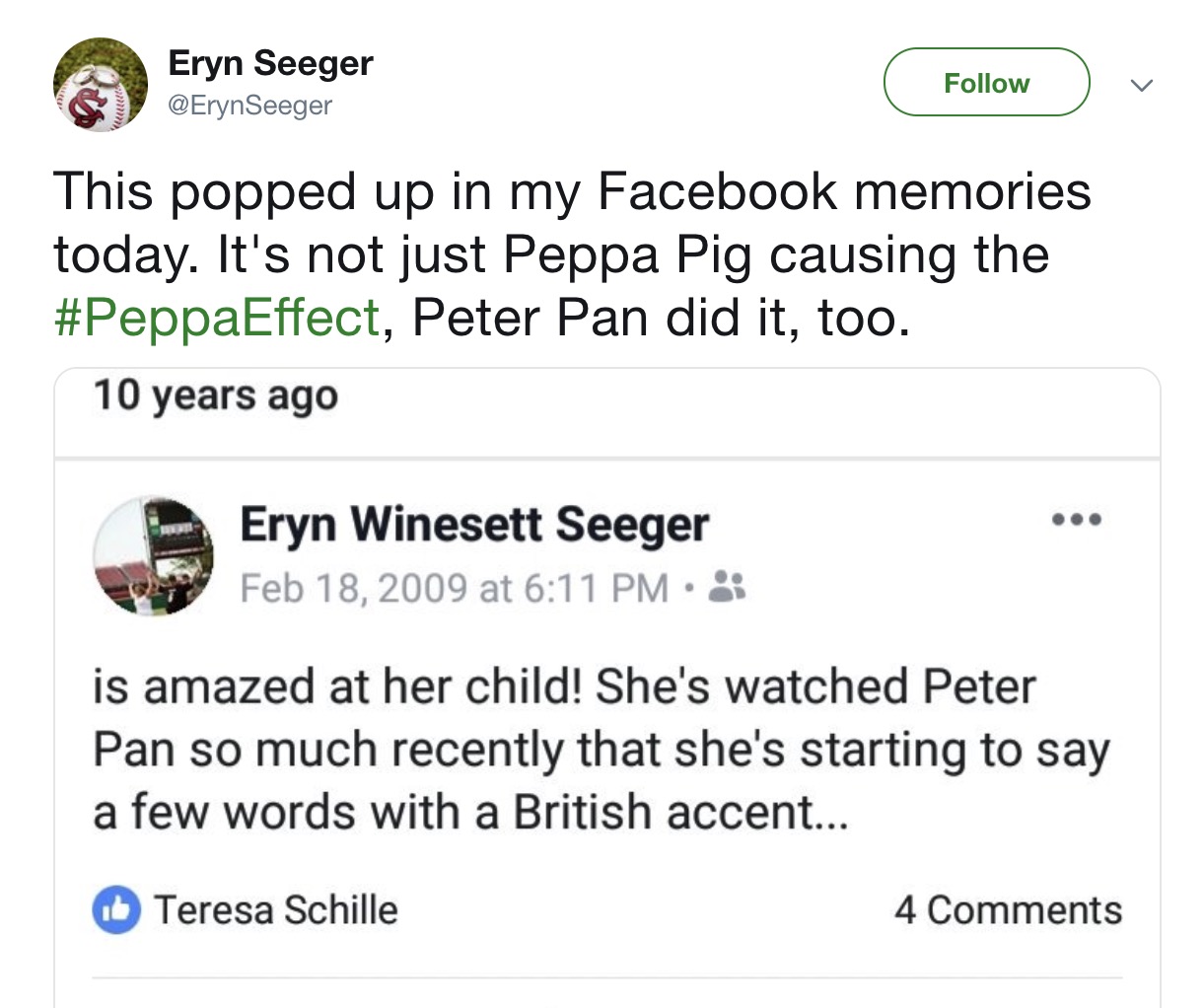 But hey, if you’re sick of hearing Peppa English from your little one, you can always try this solution. 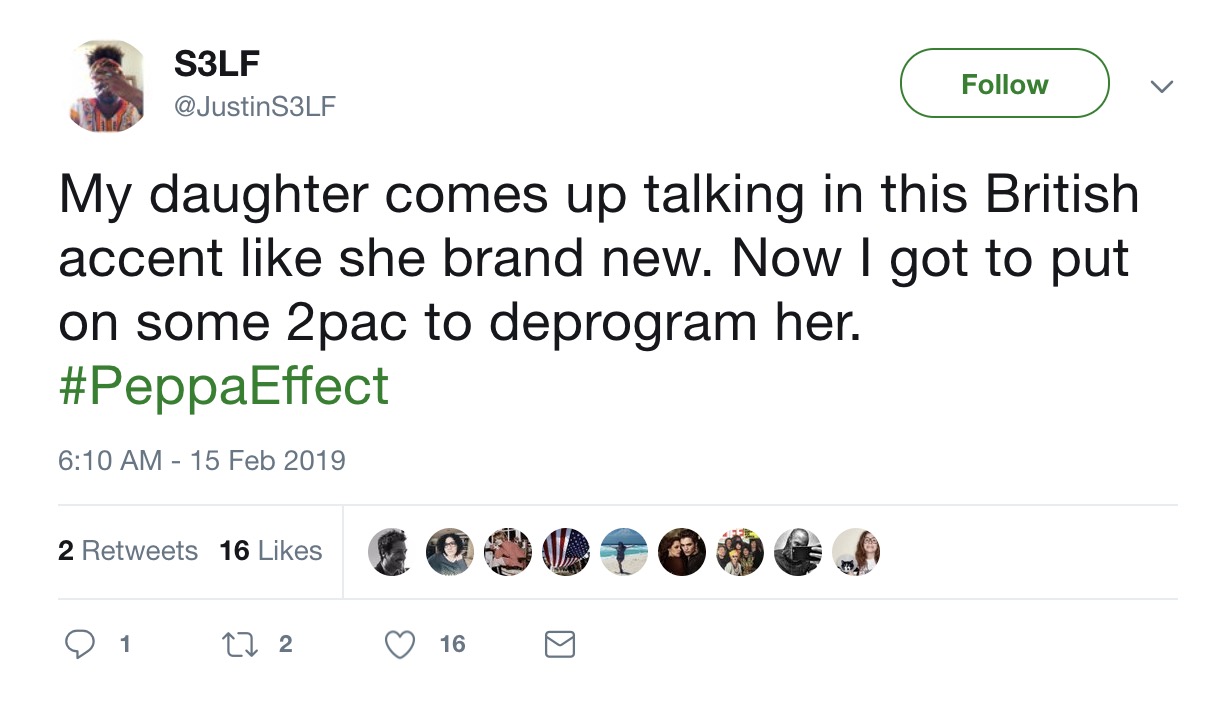 Hopefully the folks at Kidz Bop are working on an album of Tupac covers to combat this problem. They’re our only hope.