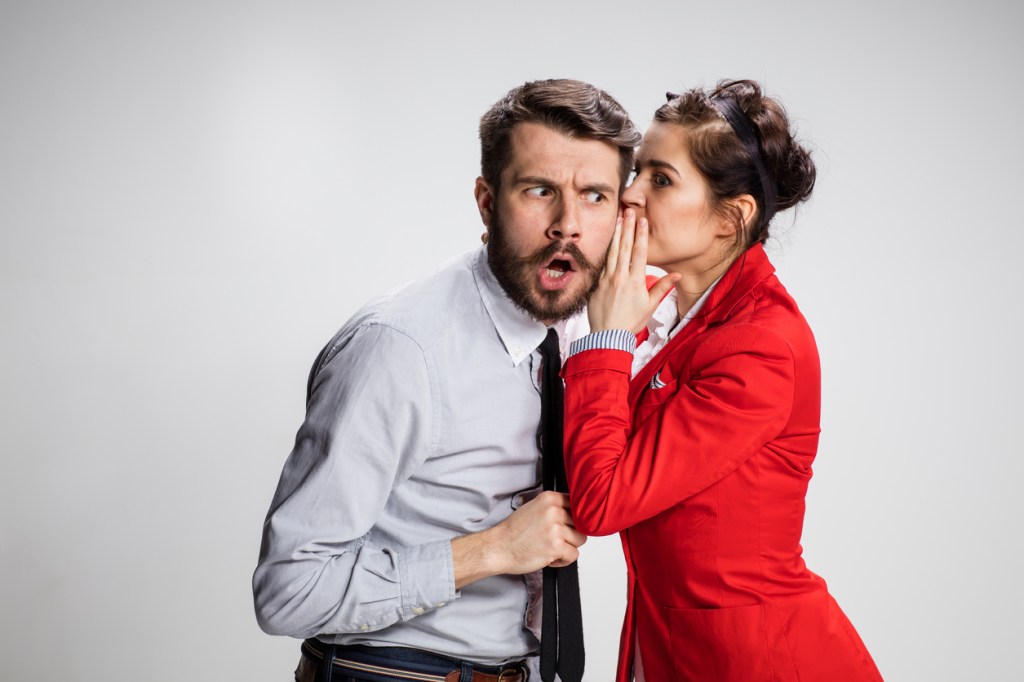 Young man telling gossips to his woman colleague at the office. Intrigues and wasting time concept

15 Confessions So Crazy They Could Only Be Shared Anonymously

We’ve all go secrets, some worse than others. Sometimes, those secrets are so bad that there’s no one you feel comfortable telling them to. And that really sucks because secrets naturally want to get out. It’s not healthy to walk around with too much on your chest.

And that’s where the Internet comes in. With very little effort and virtually no consequences, someone with a terrible secret can pour their heart out on a forum like Reddit. And posting totally feels cathartic, even if it doesn’t really change the situation. Sometimes, though, that’s enough.

I’ve discovered I’m polyamorous and cannot be happy with just him. I have no plans to cheat on him. I just want to run. I did. And now I don’t know where to go. We just bought a house. i’m planning to sleep in the car and live off gift cards until I figure out what to do. I at least have my laptop. I am so f*cked.

I am in the national guard and after two years I have had it. I plan on failing my test so I can finally get out and resume my life. I was never big into military and was suckered in in high school by free college. I would much rather work harder at my other job Which I enjoy very much and get to smoke weed when I want Then be surrounded by people I would otherwise choose not to hang around with. I am not on here looking for your judgment I just needed to tell someone because my friends and family wouldn’t understand. I know life will be more of a challenge with a general discharge instead of Honorable, but I will face it because I do have a strong work ethic though many will think I just wanted to get high all the time.

I had sex with my best friend, who happens to be my ex. It was fun. Did it a few times. Then he did some stuff with another girl (we’re both single so it’s totally ok). Now I can’t stand the idea of him touching me. Weirdest thing is I want him…like BADLY and he wants me too(just physically of course), but the idea of him touching me just makes me think of what he did (yes i know it’s illogical, he was in all his rights), and it just makes me want to cry. It doesn’t make sense. It’s completely illogical. I think it’s really pathetic and stupid of me but whenever I think of maybe doing it with him again I kinda just feel repulsed by myself… It is so idiotic I hate myself more than anything. Basically, my confession is that im an idiot.

I saw a 15-year old’s tits at a party last night. She was yelling “I’m a slut, I’m a slut!” and she flashed me, then tried to have sex with me. I couldn’t help but notice that they were really nice and now I feel like a pervert.

I’ve recovered psychically from anorexia, for about a year now, and since, I’ve gained 100 pounds. I went from 120 to 220 because like so many girls, I developed a binge eating disorder, and I began purging. But, contrary to popular belief… purging can’t get all the calories out, and when I noticed I started gaining, I just lost all hope. And now, and the peak of my highest weight, I am completely disgusted with myself. I want to be able to diet the healthy weight, and lose weight properly, but now every time I see any food, or it touches my lips. I become so disgusted with myself. I have to cover the mirrors in my bathroom when I shower because my body makes me want to cry.

6. “I’m terrified of exposing myself”

I have a large labia and because of that I’m afraid of being with anyone else. I’ve never been with a man, but the way I look is holding me back. I’ve only been with girls. I know that there’s been men on reddit saying that they don’t care what it looks like, but I’m terrified of exposing myself to someone and seeing a surprised or disgusted look on their face. I want to get surgery to make it more attractive.

I didn’t notice it until it was pointed out to me by my boyfriend and my housemates that Charlie fancies me. It didn’t bother me at first because it seemed easy enough to handle, I would just ignore it, and it would go away after a while. My little brother used to do this with a lot of my friends; it rarely lasted longer than 3-4 weeks.

The problem is that over time I’ve noticed I like Charlie too.

At first I thought it was maternal, his parents don’t give a sh*t about him and I felt sorry for him, I’d take him home with me if I could.

But now I can’t stop thinking about him, I can’t sleep, I can’t eat, and everyday my boyfriend seems less and less appealing. The best relationship of my life is deteriorating because I’m falling for a child… 7 years younger than me.

The total balance of my three bank accounts is less than a dollar. Everyone thinks I have it together, but I lost my job and am about to get slammed with legal fees over a crime I didn’t commit.

9. “I’m a horrible and pathetic human being that is chained to a life of self-pitty and lowliness”

I feel inevitably incapable of even holding a 10 second conversation with the extremely beautiful girls at my school. Hell, I don’t feel incapable, I know I am. I look at certain girls and in my mind they are literally goddesses. The epitome of beauty and bodily perfection. But they are not for me, no. I am destined to seek out the socially awkward and very unattractive girls that will have sex with me after just talking to them twice over Facebook. I say hey, they say hi, ask each other “whats up” and we both reply “bored lol” then we start the foreplay and talk about how we can make each other “unbored”. I talk to these girls in secrecy, I don’t let any of my few real friends know. I fantasize about being alone with these type of girls and how they would let me do anything to them, how I would have sex with them. I’m a horrible and pathetic human being that is chained to a life of self-pitty and lowliness. The only reason I haven’t killed myself is because my parents don’t own a pistol, it’s hard to shoot yourself with a rifle. And because I may not be able to talk to the beautiful girls, but the sex with the ugly girls isn’t bad. Most of them are so desperate and horny that they get extremely wet and even let me cum inside them. It feels amazing. This is all I live for. My interests make me look kind of like a deep guy with a good knowledge of philosophy. But deep down I am shallow and inferior.

Well, beginning of the school year, we decided that we were a bit too fat for our liking. We’re about 5’10 (me) and 5’8 (her). So we started “The Diet”…which we had done before, but we kind of forgot about it after a while. Well we were serious and stuck to it. I was 160, she was 140. At first, her goal weight was 120, mine 120 too. Basically The Diet entails that we stay under our BMR…way under…around 500 kcals a day. There’s some misc. rules, such as hardly any carbs, lot’s of protein, minimal fats, vitamins. At first we knew the consequences…now we’ve seemed to have forgotten them, each day, she says “there’s no visible consequences, it’s worth it” and I nod and agree. I went from 160 to 148 in just 3 weeks of restricting. I’ve been doing it for a long time, but I’ve been yo-yoing. The Diet seems to bring out my binging side, and once I binge I can’t stop for days. I’m at 153 right now, and honestly plan on being 110 by summer. She does too, but she’s 112 right now. And it’s taking a toll on her health. She’s passed out and hit her head and had to get stitches. She’s cold all the time, her immune system is depleted. And, even though that’s happening to her, I can’t help but be jealous. I see her, and I see skinny. Thigh gap, flat stomach. But it’s not enough The Diet mentality makes it so it’s never enough. She still sees fat.

Well it is a complicated story but the gist of it is that I took video of my best friend’s girlfriend naked, but that isn’t even the half of it. That girl who I videotaped naked happen to be the sister of my girlfriend of three and a half years. This was years ago but it took almost two years to come out into the open. My (ex) best friend told everyone I knew what I had done. I lost all of my friends and am now alone and depressed. I was forgiven half a year later by the (ex) best friend, but this stupid choice by me has cost me so much. I’m all alone in a new city afraid my past will follow me the rest of my days.

I know it’s just hormones and lust, but it hurts sometimes to know that I might have made the wrong choice and that can never be changed. Please note that I do love my boyfriend, I really do. I just can’t get over this stupid attraction to his best friend. ?

I lost my virginity to my first girlfriend when I was 19. I didn’t want to have sex yet, but she was 17 and threatened to tell her dad and have me arrested for statutory if I didn’t go along.

I told my next girlfriend, when I was 24, that I was a virgin, and have been pretending that lie ever since.

There’s not really a whole lot to say. I’ve been fantasizing about my gf’s sister. I don’t know if it’s the taboo nature of it that turns me on or if it’s that she appears to have a great set of breasts. Sometimes, when I’m alone, I go to her facebook and jerk off to her photos, especially the bathing suit shots. We’re all going on a tropical vacation in a few months, and I’d really like to try to get the group interested in a nude beach (we’ve just joked about it so far). It’s probably a terrible idea, but I can’t help myself.

15. “Someone must have spiked my drink”

I went to a party with my best friend last Friday, as a favor to her. I don’t normally go to these things, but she asked me to go as part of her Christmas present. I wasn’t drinking, but I think someone must have spiked my drink, because I blacked out and woke up alone, without my underpants. My friend got mad and left without me because the guy she had a crush on was hitting on me. I had to walk 3 miles without a coat until I made it somewhere I recognized and I could get someone to pick me up.

I don’t know what to do, because I was sexually abused by my stepfather as a child, and I don’t want to put my family through this again. I’m a wreck, and have been since it happened.