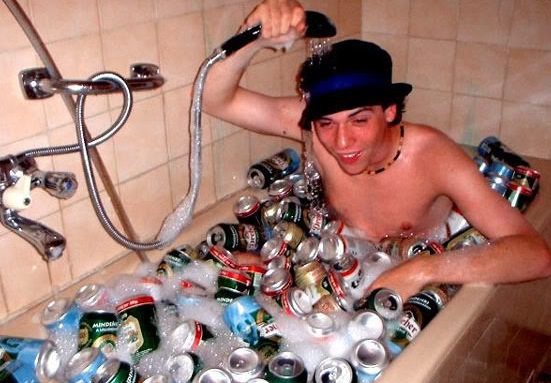 I think it’s a bit overrated, but plenty of folks LOVE the debauched revelry of December 31-January 1. And I have to admit, some of these tales from AskReddit users about the best drunken stories they remember from New Year’s past sound pretty frickin fun:

Coming home from the party last night, we stopped for pizza. The super drunk guy in front of us in line told us he paid for our pizza. He made a big deal out of it, but then fumbled the machine and almost forgot his card and dropped his pizza box on the floor.

We asked the cashier if he had paid for our pizza. She double-checked and said, “Actually, he… didn’t even pay for his own pizza.” We paid for it.

He fell down and spilled a can of Dr Pepper all over the floor. Then he dropped his phone on the floor and said, “oh no, my phone is in Dr Pepper!” Then he looked around and exclaimed, “oh no I’M in Dr Pepper!”

Also, plot twist, this is actually about me and I wrote in the third person so I didn’t sound like such an idiot.

A guy I’d never met named Tony kept asking all the female party goers if they knew what his name was spelled backwards. Then would slur out ” y not” my wife thought it was funny and creepy at the same time.

We asked our friend how drunk he was. He responded, “Twice!”

Our one drunk buddy tried to shoot a firework while holding it in his mouth. I don’t think he’ll be trying that again.

He tightened it too hard so the firework never flew. Instead, it exploded right on top of him. He ended up with his face completely black from the powder and some pretty nasty burns.

Two policemen were standing next to us when this happened. They told him it was the stupidest thing they had seen all year (and yes we were still in 2016).

There were a few singles at my New Year’s Eve party. They were joking about just all kissing each other, when my buddy suddenly offered to kiss all of them.

When asked how he’s going to accomplish that he manages to slur out the words “Midnight is a whole minute, and I get around.”

I live in Texas and have a friend who moved here from Scotland a few years ago. Ever since she moved here she consistently has faked an “American” accent to fit in.

Last night she got so drunk she forgot about her American accent and started swearing loudly in the thickest Scottish accent for an hour or so.

We were partying on the beach, and this one guy couldn’t find anywhere to hide his bag. So he just tossed it into the ocean and yelled, “Nobody can steal my beer now!”

“STOP TELLING ME WHAT TO DO, I HAVE NEVER DIED BEFORE.” Delivered by a friend who got kicked out of two clubs and wanted to keep partying.

I think I might have been that person. I woke up this morning and saw a photo of people stacking boxes on my head. It was impressive how tall it was and that I didn’t wake up as a result.

12. I gotta get me some of those shoes

The brother of the host came to party with us. After half a bottle of schnapps, he told us that his shoes are fireproof up to 1600 Celsius. Of course no one believed him, so he stepped in the campfire and stood in there for 10 minutes. Thankfully, he was right.

I saw a guy peeing in the middle of a busy road, flipping off the cars driving by. It was 9 PM.

I was DD and my friend had to puke, so we pulled over and he threw up in the street/sidewalk.

I was looking for cops because I wasn’t sure of the legality of him throwing up in the street regarding littering laws or whatever, and small town cops in Delaware can be sort of prickly. He was finishing up when a cop rolled by.

He drove past us and didn’t stop, but then he turned around and drove past again. He went down the street and around a corner so I assumed we were safe.

I drove down the street and shortly after the cop rolls up and pulls us over. I’m sober so I’m not too worried but when he walks up to the car he has a bottle of water in his hand and asks, “hey do you guys need this?” looking at my friend slumped over in the back seat.

We all laugh and thank him and he lets us go on our way. I know he was doing his due diligence making sure I wasn’t drunk but he was cool as hell about the whole thing.

He swapped clothes with his girlfriend, and stripped on the living room table for fake $100’s from the game of monopoly us sober people were playing.

My best friend went over to the keg to get some beer. He pumped the keg and proceeded to spray beer all over his phone which he thought was a cup.

I was so stunned I didn’t say anything for like 10 seconds and when I did he looked at me like I was stupid then looked back at his phone and threw it across the room.

17. He was just trying to help

A really drunk guy took the giant bowl of noodle salad and started trying to feed everyone with it. He would walk up to people and put a spoon in their mouth. He also tried selling his scarf because he owed some guy money.

On our way home after the party we got pulled over by a cop for taking too wide of a turn. It was raining pretty hard and our driver wasn’t super familiar with the area.

This is when the drunk jerk laying across the back seat starts panicking and screaming, saying he knows we are getting pulled over because he wasn’t wearing a seatbelt.

Long story short: cops don’t appreciate it when they can tell someone’s freaking out in the back of a car they’re walking up to. Luckily, he was a cool guy, ended up giving our DD a sobriety check and sending us on our way.

We apologized for the actions of the drunk guy but it was pretty late and the cop just seemed glad we had a sober DD. But I don’t recommend reaching through an open car window to try to grab at a cop, even if you’re just trying to stumble through a drunken apology.

Me and my friend made gummy worms with booze in them. At one point, someone found some tongs to pick up the worms with, and fed one to one of the girls at the party. He said he felt like a momma bird.

In my drunken wisdom, i decided I wanted a momma bird too and proceeded to flap my arms like a bird and squawk. I was immediately rewarded with a delicious worm.

Cue about 10 people then squawking and flapping their arms in unison as we were being fed spiked gummy worms by a drunk man with tongs.

What a time to be alive.

He started taking selfies with his selfie-stick. Inside a fridge at 7/11.

My friend was hosting a party, and got pretty tipsy. As the night wore on, he changed his shirt 9 times, took 3 showers, attempted to drink a shot and spilled it all over himself, then tried to take another shot (someone stopped him because he was pretty far gone).

He also kept grabbing more wristwatches from his room as the night carried on. By midnight, he was wearing 5 or 6.

When I left, he was laying on the floor soaked in booze with his headphones on, not plugged in to anything.

This weird Guy showed up and refused to touch or be touched by anyone (hand shakes etc.). Then he got really drunk and someone caught him crapping in a flower pot.

His name was grant and he claimed to have been an F16 stunt pilot for various films, but another guy at the party knew him and said he’s a plumber.