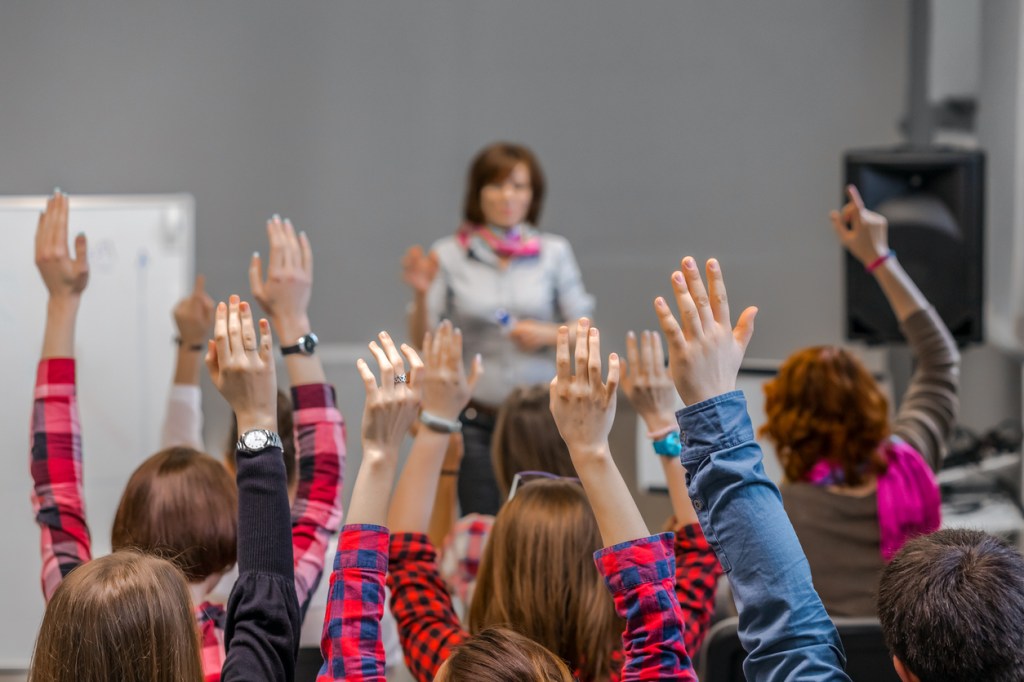 I still remember my finest moment in high school. A teacher who was annoyed with me said, “If I hear another peep out of you, you’re gonna be in trouble.”

The classroom erupted in laughter. I was a LEGEND (for 5 seconds). It’s been downhill ever since.

Take a look at 21 of the best sarcastic responses that students and teachers shared on AskReddit.

I had a teacher tell a classmate “no drinks in class.” He got up from his seat, picked up the teachers drink, and deposited in the garbage with his drink. She sent him to the office.

Back when I taught first grade, we were doing a writing assignment about Thanksgiving. The kids had to draw a picture of their family celebrating Thanksgiving, and then write about it. One little girl drew the table and chairs, and that was all. I knew she just didn’t feel like doing the work, so I tried to prompt her. I asked where the food and her family were, and she snapped right back with, “They’re washing the dishes.” Had to give her credit for coming up with a logical argument for not doing the work!

A kid in my math class would sleep on his desk. One day the teacher called on him to answer a problem on the chalk board. He woke up, solved the problem on the board with zero difficulty, and then just went back to sleep.

The teacher repeated the same thing a few times with similar results, and then just let him sleep the rest of the year.

This really shy kid that doesn’t really speak much was getting picked on by this mean girl when the teacher tells her, “Be nice to him, he might be your boss someday.”

Without missing a beat he replies, “No thanks, I don’t want to be a pimp when I grow up.”

My history teacher would spend half the class making jokes directed at the students. One student in particular always took the jokes on the chin and never really made any comebacks.

Eventually, the teacher called him out and jokingly lectured him about standing up for himself. He ended his rant with “You’ve gotta be a man. You’ve gotta be like me.”

We had a teacher that would always threaten to phone our home if we were misbehaving, but she promptly stopped after this:

Teacher: “What would your mother say if I called home right now?”

Student: “She would say hello.”

I’m not a teacher, but I had a friend in school who was always pretty dramatic. She actually did have IBS though. So we’re in this teacher’s class and she keeps asking to use the bathroom.

The teacher says no and my friend’s like, “I have IBS though!” and the teacher is like, “Tell me what those initials mean and I will let you go.”

So she screams “IT MEANS I HAVE TO CRAP” and takes off out of the room.

In high school one of my teachers was having a disagreement with a student. I can’t remember what it was about but finally the teacher ask him if she wanted her to call his mother. The student replies, “Do it then. My mama will agree with me too.”

The teacher then asks him to leave her class. He goes, “You know what I’m gonna call my mom for you.”

He then whips out his cell phone and calls his mom on speaker. “Hey, ma, this teacher want to talk to you.”

The whole class just lost it.

9. Kid from the back

Well this one was during coaching classes for entrance exams.

The math teacher reduced a given problem to a simpler form and challenged the students, “So this expression doesn’t fit any of the given standard forms for us to find the particular integral. So what do you propose we do?”

A kid from the back shouted, “The next question.”

Anyway, one day, after a long week, I sat down to lunch with my class and say to a child (we’ll call him Tommy), “Boy, Tommy. I’m really tired today.”

Without skipping a beat, he swallows his Mac-n-cheese, looks me right in the eyes and says, “Hi, Really Tired. I’m Tommy.”

That was the day I knew I had taught him all I could.

Took my class to an art gallery. As we waited for our tour to begin we played on the small playground near the door. A prep school kid in a uniform approached two of my boys and said, “I bet I’m smarter than you are!” I watched to make sure no blood was drawn – my students can hold their own pretty much anywhere and they don’t accept insults casually.

But they were cool. “No you’re not. Are you in Grade 2?” The boy said he was and one of my boys said, “So then we’re all grade 2. So we are all grade 2 smart.’ He went back to climbing the monkey bars.

But the prep school kid continued. “I know I’m smarter. Let’s do some math and I’ll prove it.”

The toughest kid in my room looked this guy square in the eye and said, “Well, I’m smart enough not to do math when I’m having fun on a playground.”

In HS our Functions and Relations teacher would always start to say something, forget it and say, “I lost my train of thought.”

Well one day a buddy of mine replies, “It’s okay sir, there were no important passengers onboard.”

He then spontaneously came up with a rap song called “Don’t Do That” and his friends started making beats. I was no longer mad.

Student in my Spanish class was sleeping, like always. Teacher finally got tired of it and tried to embarrass him by waking him up and yell at him in Spanish.

The student responded with, “I’m back here minding my own business, not causing any sort of distractions at all, and you decide to stop everyone’s learning by trying to make me look stupid. We all know I have no idea what you’re saying, so please stop disrupting the class and let me go back to not bothering anyone.”

She never said another word to him.

Let me point out that I’m female since people will assume I’m a guy. I taught in an inner city school. We were talking about prime numbers so I would have kids give me a number and we’d work out if the number was a prime number on the board. One kid wasn’t paying attention so me being a young teacher I thought I’d catch him off guard and call on him. It went something along the lines of,

“I need your number.”

“Play it cool, girl. We can talk after class.”

The whole room lost it and I turned red from embarrassment. They then laughed at how red I got.

Our teacher was teaching us about the States of Matter, solid, liquid, and gas.

He was talking about how a solid you can break into littler pieces, but how you can’t do the same to liquids or gases! So I blurt out, “But you can break wind.”

I still talk to that teacher and he says that was the best part of his teaching career. This was in 6th grade.

My math teacher said: “If you don’t understand, ask me. There are no stupid questions.”

Where a guy in my class quickly responded: “Is that so? Do you cut your toe nails with a chainsaw?”

Not a teacher, but this happened in an upper level French class where you can only speak French. If you speak English, the teacher scolds you in French.

My friend walked in a few minutes late for a quiz, and wasn’t allowed to take it. My friend looked at the teacher and said (in English), “That’s BS.”

The teacher looked back angrily and said (also in English), “What did you just say?”

He got kicked out of the class.

One of my classes is fun in that we give each other hard times, but all in good fun and accomplish a lot. A girl starts giggling uncontrollably for no reason, and she’s a bit of an airhead so I asked her if she saw something shiny and if that entertained her.

Another boy jumps in and says, “Yeah Mister, your head”

I’m going bald. I wanted to pretend to be mad but it was just too damn funny.

I’m a diving coach and I have 4 divers I’m responsible for so I don’t usually get swimmers contact info. We were on our way to a meet and one of the swimmers was not on the bus. I said, “Who has [redacted]’s number?”

So obviously I got mad. “This is your teammate and not one of you girls has her phone number to text her?” So one of my divers chimed in, “Why don’t you coach?”

I said, “I have 4 divers, I don’t need another 30 high school girls numbers in my phone.”

She replied, “Hahaha, you wish!”

Easily the best burn of my coaching career.

Tangentially related: Smart-aleck response from teacher on behalf of the student.

Had a student that came back a couple of weeks out of class, counselor let the teachers know that his father had passed and he was having a rough time. I pulled him aside after class one day, told him not to worry about any of the work he missed, “Focus on getting caught up in your other classes, I’ll make things work out here.” (I was his 10th grade English teacher, we had already taken the End of Year Exam, as far as the State was concerned he was done, and that was good enough for me. Kid was straight A’s until his dad passed.)

Cut to a few weeks later, I’m called into the counselor’s office for a meeting with the student’s other teachers. I double check and he’s been doing great in class, and work I’ve assigned has been turned in on time (even though I told him he didn’t have to.) So I have no idea what’s going on. Come to find out his other teachers weren’t as lenient on the make up work as I was. He had gotten behind in all his other classes and had stayed behind, now he was in danger of failing everything but my class, he’d have to repeat the year save for English. Counselor asks me what I did to help the student.

“Oh, well I told him not to worry about anything he missed, and that as far as I was concerned he was already caught up and he could do his best in class going forward.”

One of the other teachers bawked, “I don’t see why we needed Mr. HexedDragon’s input, he just let the kid skip out on work! That’s not helpful!”

I replied, “The kids Dad just died, you really think the last six weeks worth of history matters to him in the slightest?”

The counselor smiled and pointed at me. “I invited Mr. HexedDragon because I knew he would say some things I’m not allowed to say.”