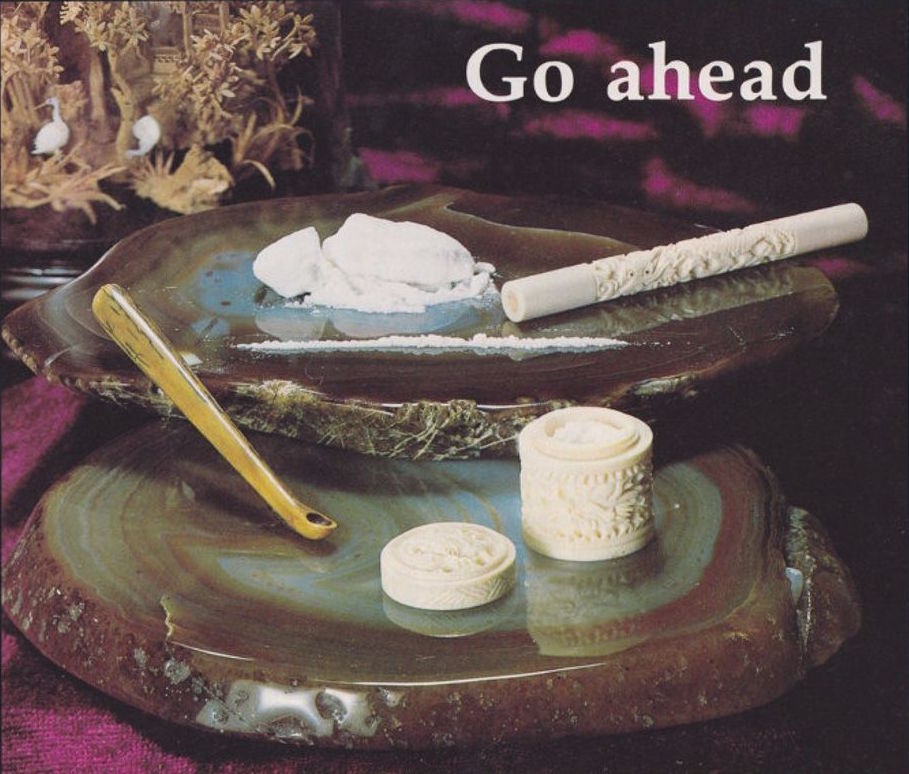 As cocaine became more and more popular as a recreational drug in the 70’s, a cottage industry of related paraphernalia sprouted up along with it. This was the heyday of coke spoons, coke mirrors, and even fancy testing equipment to determine your cocaine’s purity. And drug magazines like High Times and Head were full of ads for it all.

If you’re wondering how in the hell this is allowed in the first place, you might be surprised to hear that ads for drug paraphernalia are legal most places in the U.S. (except in a couple states). But why do we still see plenty of ads for marijuana paraphernalia today, and almost none for coke gear? Let’s turn to LA-based advertising consultant David Wilfert, who runs the website The World’s Best Ever. “Since culture as a whole had not seen the effects of cocaine addiction, ‘snow’ was being marketed alongside grass in equal measure,” Wilfert told Buzzfeed. “Although there is noticeable decline in this as we get later into the ’70s and early ’80s.”

Wilfert dug up these ads from old magazines, and it’s thanks to him that we can revisit the Golden Age of cocaine Advertising.

Mannitol, if you weren’t aware, is used to cut cocaine, and “Mannite Conoscenti” is an Italy-based mannitol brand. If you look at the fine print, the ad goes on and on about how their product is “perfectly safe,” which is about as reassuring as using a picture of a lady with a gun.

Can an object be “elegant” while also being used to cut rails? Did Socrates ever get around to solving that one?

“And tomorrow night we’re predicting no sleep, with a 100% chance of terrible life decisions.”

I like how there’s a budget-friendly sterling silver version AND a 14 carat silver version. It’s always good to have something to strive for. 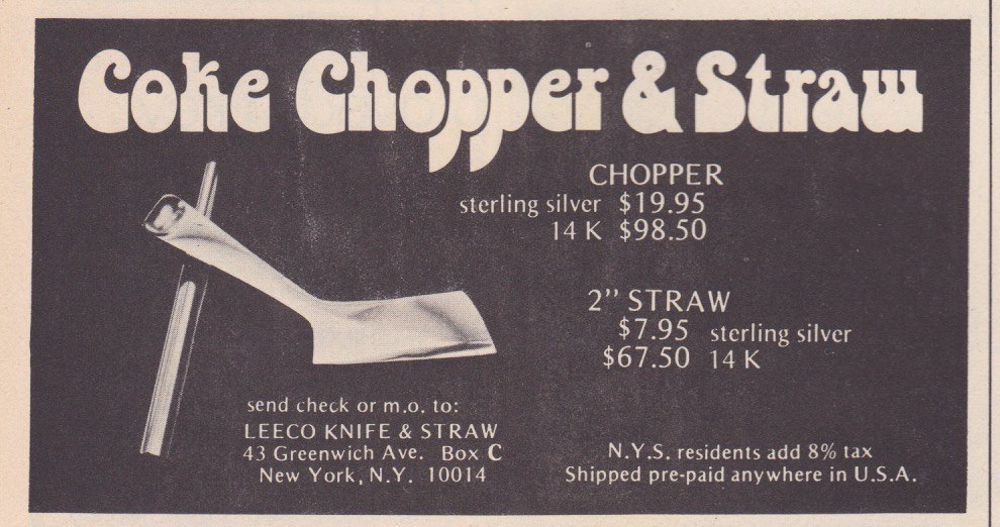 One of my biggest pet peeves is when my cocaine is lumpy. Wait, I’m thinking of mashed potatoes.

The company that makes this bottle is called “Klimax.” If you look at this ad for longer than ten seconds, you will contract Herpes.

Ooh, an umlaut over the “O” in Cokesnuff! So sophisticated! So European!

Also, who does a bump of coke and then thinks, “This is OK but I really wish it were menthol flavored?”

They also double as Monopoly pieces.

One day you’ll be able to subscribe to Cocaine Aficionado, but until then this will have to do.

“The most startling snow invention since the nose!” It’s almost like they were on cocaine when they wrote this ad.

This is probably still available today at Spencer Gifts.

“Nose doucher” are two words I never thought I’d put next to each other.

Doing coke off a mirror is so yesterday. Everyone who’s anyone does it off a chunk of Brazilian agate.

They’re selling this as a “keepsake.” Because who wouldn’t want to pass on their stash kit to the grandkids?

That’s right, this is a portable device to test the quality of the cocaine you’re thinking about buying. Unfortunately it doesn’t come with a gun to shoot the dealer who tried to sell you two grams of baking soda.

Cocaine and fish puns go together like cocaine and cocaine! And more cocaine! And I SWEAR TO GOD IF I DON’T GET MORE COCAINE RIGHT NOW I’M GOING TO LOSE IT!