We all probably got sent to detention at least once in our school careers. I was by no means a troublemaker but I definitely got busted for tardiness and forgetting (aka blowing off) my homework a few times. Happens to the best of us.

But there are a rare few students who manage to elevate their disruptiveness to a level that’s almost like performance art. These kids are so good at screwing with the teacher, Tom Green would be jealous.

Below are 17 of the craziest reasons students got detention. Looking through them almost makes me with I could pull a Billy Madison and repeat school just so I’d get another crack at detention infamy. ‘Til then I’ll just have to live vicariously through these heroes.

1. For revealing his true identity. 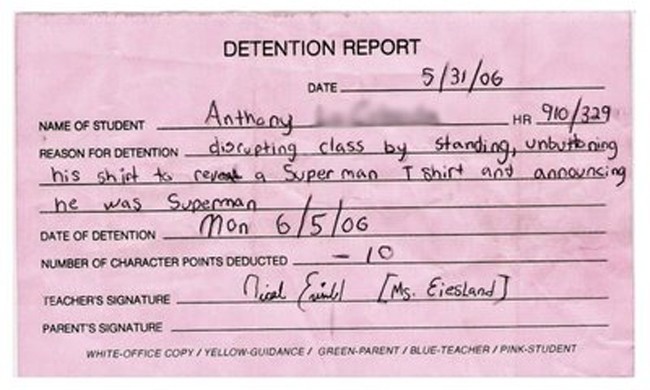 “Disrupting class by standing, unbuttoning his shirt to reveal a Superman t-shirt and announcing he was Superman.”

2. For being a Belieber, and standing up for what he Beliebes in. 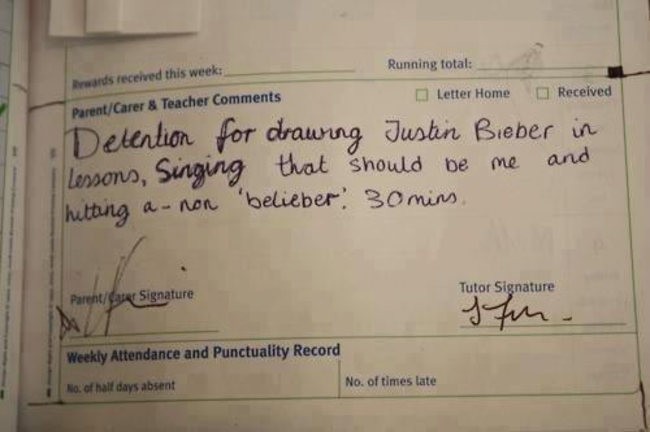 “Detention for drawing Justin Bieber in lessons, singing ‘That should be me,’ and hitting a non-Belieber. 30 mins.” 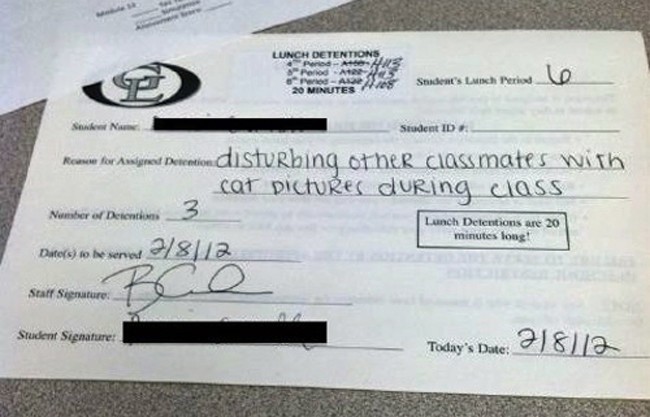 “Disturbing other classmates with cat pictures during class.” 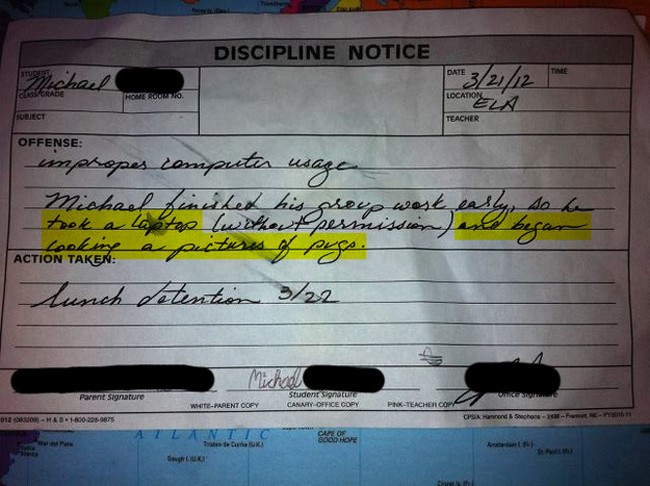 “Took a laptop and began looking at pictures of pugs.”

5. For disrespecting both the teacher AND the hottest toy of the 90’s. 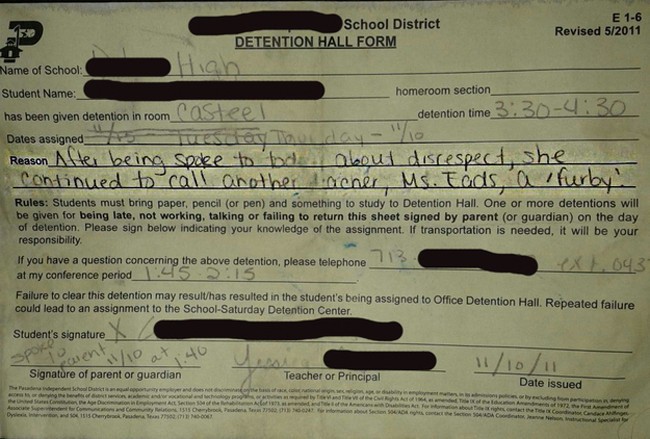 “After being spoken to about disrespect, she continued to call another teacher a “Furby.”

6. For being Michael Scott. 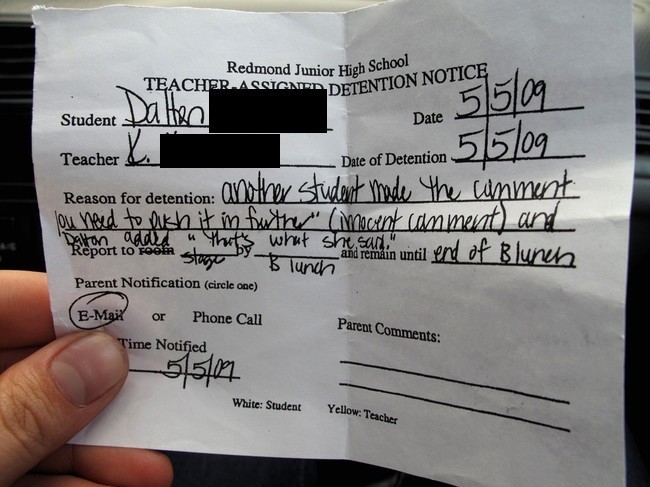 “Another student made the comment, ‘You need to push it in further,’ (innocent comment), and Dalton added ‘That’s what she said.'”

7. For sacrificing herself for the greater good. 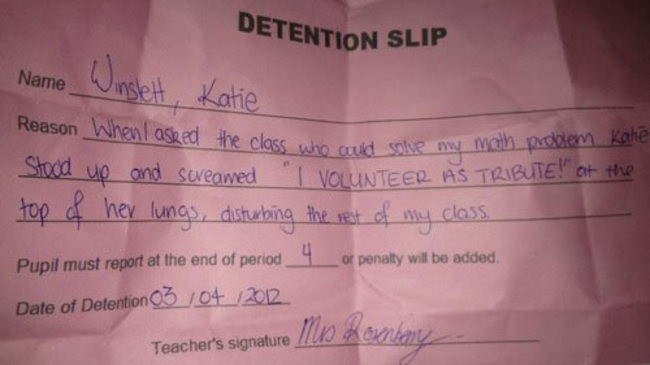 “When I asked the class who could solve my math problem, Katie stood up and screamed, ‘I VOLUNTEER AS TRIBUTE!’ at the top of her lungs, disturbing the rest of my class.”

8. For being too status-conscious. 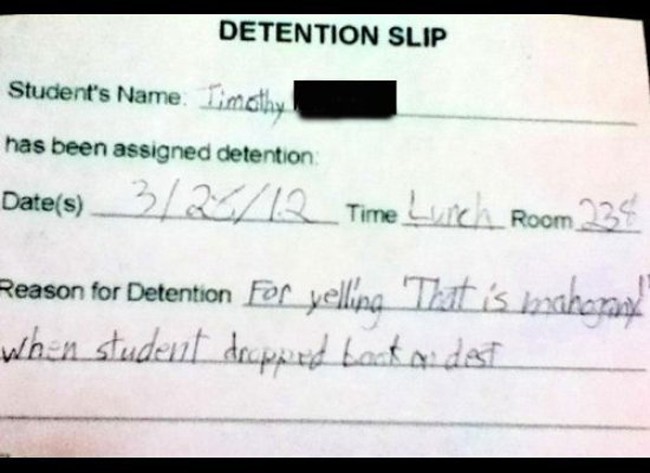 “For yelling ‘That is mahogany!’ when student dropped book on desk.” 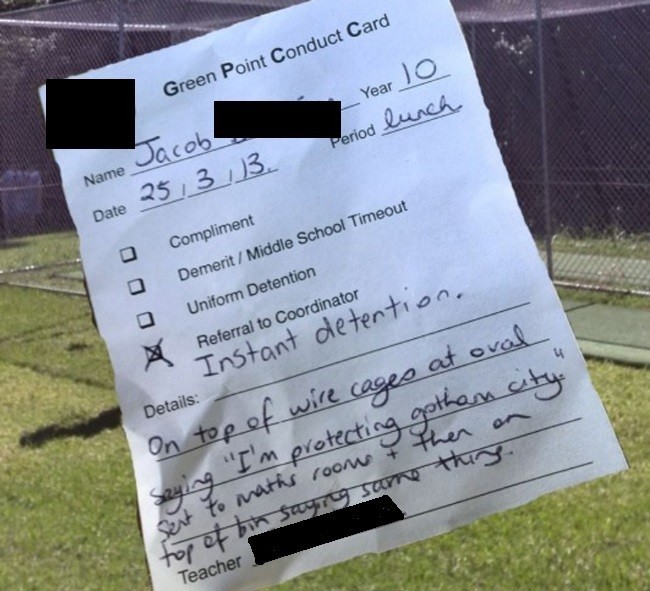 “On top of wire cages at oval, saying ‘I’m protecting Gotham City.’ Sent to maths room and then on top of bin saying same thing.”

10. For dropping a sick burn, if you are Harry Potter. 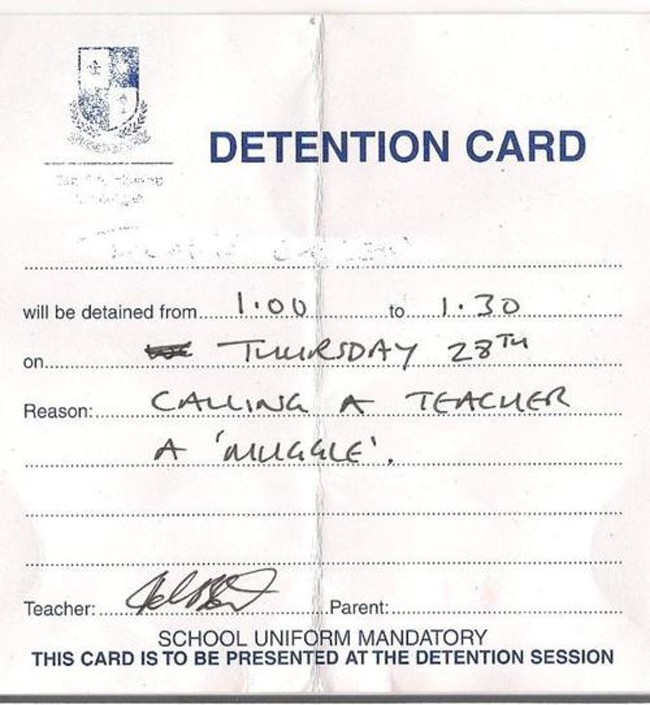 “Calling a teacher a ‘Muggle.'”

11. For an unwanted lunch delivery. 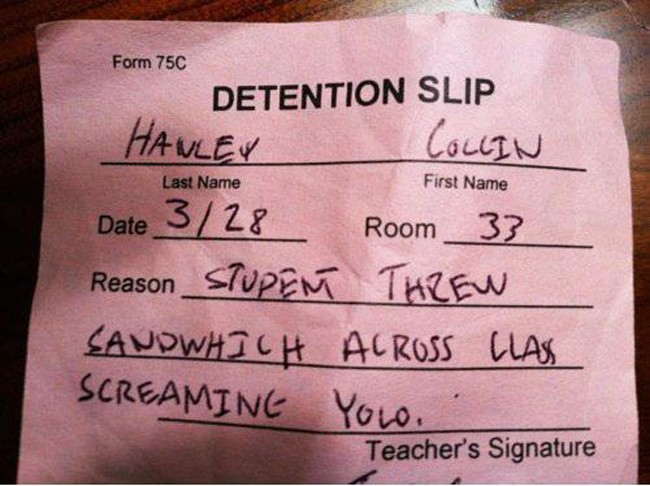 12. For showing too much enthusiasm for chemistry. 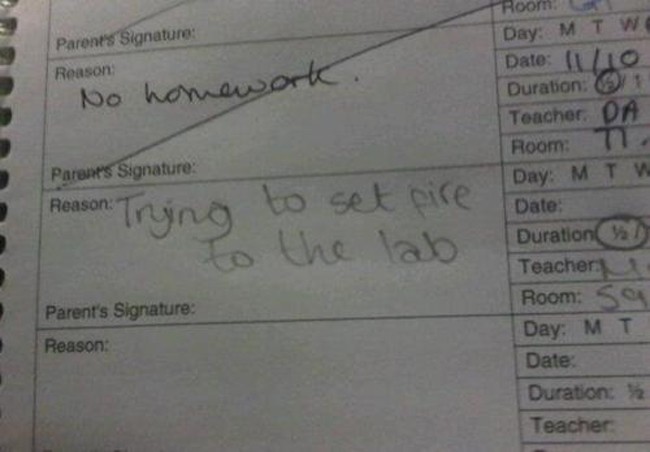 “Trying to set fire to the lab.”

13. For celebrating the end of Movember. 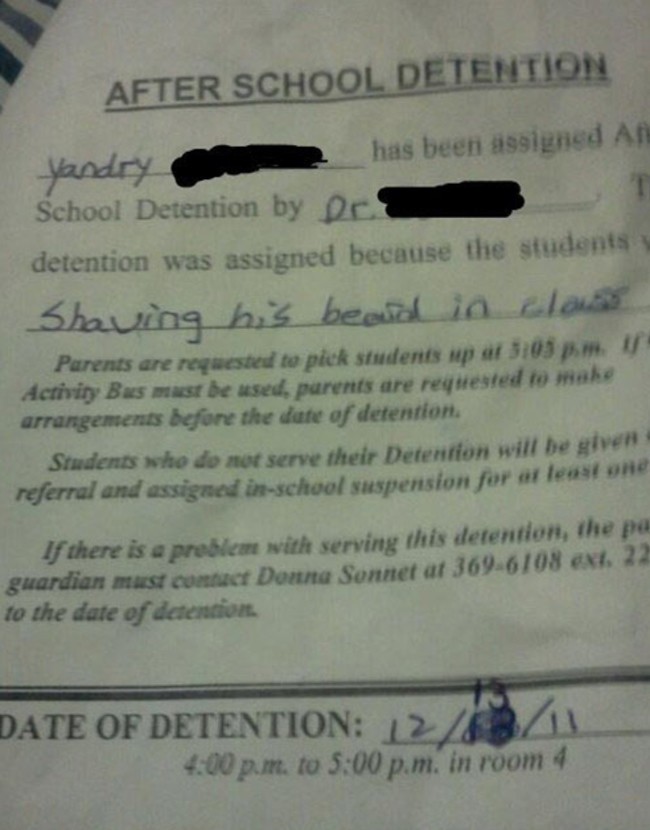 “Shaving his beard in class.”

14. For dropping a sick burn, if you are Teddy Roosevelt. 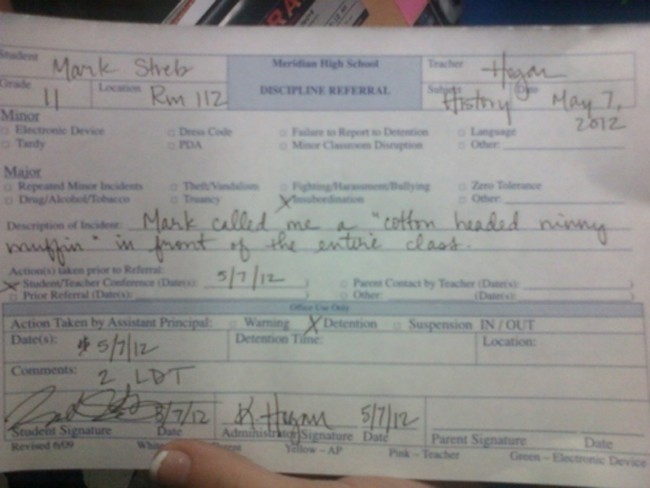 “Mark called me a ‘cotton-headed ninny muffin’ in front of the entire class.”

15. For fighting The Cold War. 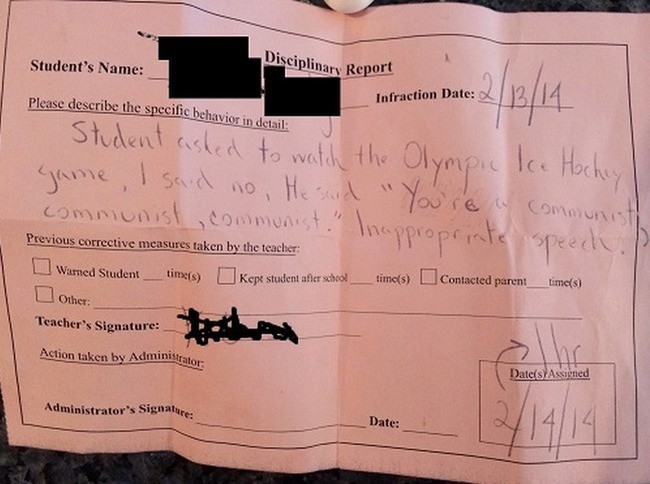 16. For a messianic complex. 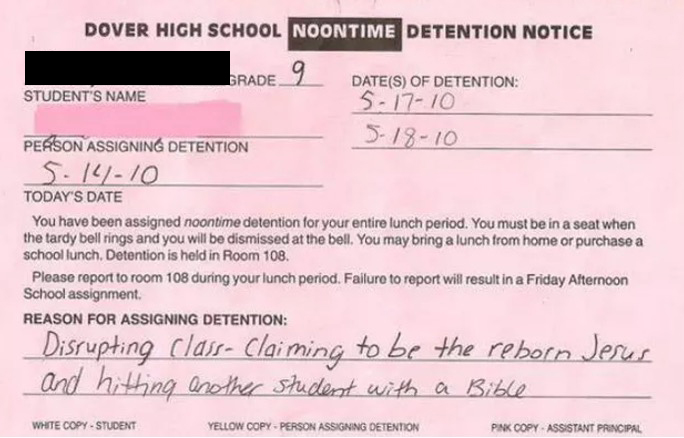 “Disrupting class, claiming to be the reborn Jesus and hitting another student with a Bible.”

17. And finally, for alternative facts. 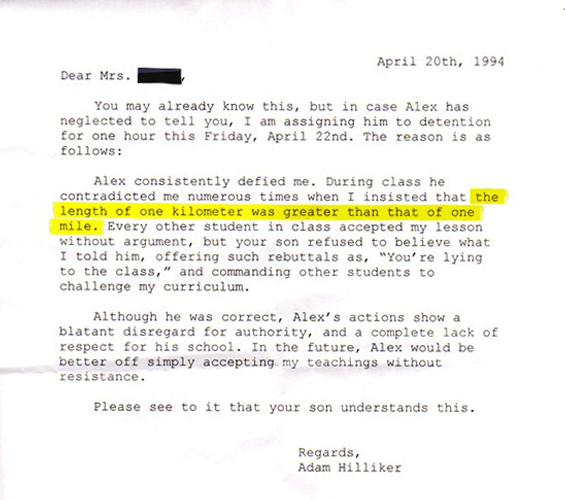 These Dogs Are Really, Really High…
15 Badly Drawn Fan Tributes
15 People Who Think They Took A Photo With A Celeb
12 Funny Tweets About Being a Woman
IKEA’s ‘Relationship Saving Station’ Tries to Keep Couples from Fighting While Shopping
15 Unconventional Bathroom Signs